This week, people are planning protests across the nation beginning the day after the election. Some, like Democratic Party-aligned groups and unions, will only demonstrate if President Trump loses and refuses to leave office. Trump will fail if he tries because the ruling class has clearly shifted its support to Biden. Professor Adrienne Pine explains this in her analysis of the opposition to Trump. Others such as issues-based groups, coalitions and community groups are planning to take the streets no matter what the outcome of the election is.

This is good news because a mass mobilization of left and progressive groups is needed to change the rightward direction in which the United States is headed. Michael J. Smith’s explanation of the “ratchet effect” describes the roles both Republicans and Democrats have played in moving our politics in that direction since 1968. In a nutshell, each time the Republicans moved to the right, the Democrats followed with the excuse that it’s necessary to win votes. This locks in the rightward motion, opening space for Republicans to move to the rightward again.

But Smith also writes, “the Democratic Party has assumed the role of ensuring that the countervailing pressure from the Left doesn’t happen. The party contains and neutralizes the Left, or what there is of it. Left voters are supposed to support the Democrat, come what may.” This is one of the reasons why the expression “the Democratic Party is the graveyard of social movements” exists. How do we counteract that?

In a recent episode of Eleanor Goldfield’s series, Deception 2020, she and Eugene Puryear discuss why the trope of “this is the most important election ever” is recycled in every presidential election. It serves as a great distractor that puts the focus on personalities rather than the broader social context of where we are. It pits Republican and Democratic voters against each other while the ruling class plays both sides, putting the most money on the one that has the best chance of winning. The people hold their noses and vote for whomever they consider to be the lesser evil while the wealthy class knows their interests will be served no matter who wins.

The year 2020 has brought into clear focus that we are living in a failed state and can’t afford to be drawn into this distraction.  The number of new COVID-19 cases surpassed 100,000 in one day. The recession is likely to deepen into a prolonged depression due to Congress’ failure to provide supports for families and their businesses and farms. The climate crisis is raging. And structural racist violence goes on in all of its forms while the Pentagon continues its insatiable consumption of the federal budget leaving austerity for the rest of us

Instead of being caught up in this “political ping pong”, as Kevin Zeese would call it, we need to focus on these grave issues before us. I learned some lessons to avoid this ping pong during my involvement with the health reform process in 2009-10 when we were advocating for national improved Medicare for all while the Democrats were pushing their version of a healthcare bill that protected the profits of the health insurers, pharmaceutical companies and big businesses.

The lesson is best summarized using the acronym “ICU.” Think of it as what is needed, especially in a time of crisis. The “I” stands for independent. It is important not to tie our issue to the agenda of a political party but to maintain independence from them while we press for what we need, lest our struggle be co-opted. The “C” stands for clarity, meaning we must be clear about what we are demanding. Members of the corporate duopoly will always try to water our demands down with proposals that may sound positive but are less than what we need. Look at the Democrat’s Green New Deal as a current example that protects the dirty energy industries and is too little, too late. And the “U” stands for uncompromising. The ruling class will always tell us we are asking for too much but we can’t compromise on fundamentals such as health care, housing, education, financial security and an end to violence against us. These are universal basic needs that nobody should be denied.

With this 2020 vision, we can mobilize a broad movement that puts forth a bold agenda of what we need and fights for it, no matter who is elected. This is how we reverse the ratchet effect. We can look to Chile as a recent example of a people succeeding in their struggle to reverse the ravages of neoliberalism. Patricio Zamorano describes how a similar situation to what we face, great inequality and injustice, drove people to mobilize despite severe repression and win the right to remake their Constitution. 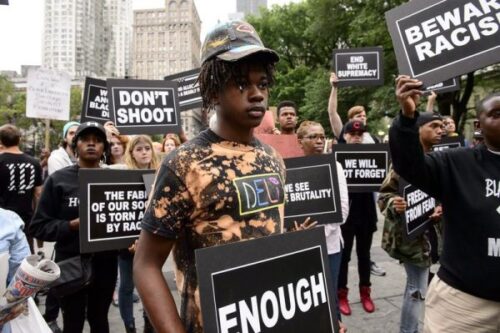 Violence on the rise

One reality we must prepare for is the continued rise in right wing violence no matter who wins the election. If Trump wins and people continue to struggle to end the injustices we face, right wing extremists will be emboldened by a president who encourages them. If Biden wins, they will be angered at what they view as a threat to the gains they have made and may lash out.

In light of this, communities need to organize to be vigilant to what is happening around them and to be proactive in creating structures that provide safety and mutual aid, particularly for those who are most vulnerable.

We live in an era of great polarization. This is expected because it goes hand in hand with great inequality and it often precedes moments of social transformation. Think of it as heightening the contradictions and forcing a choice. Who are we and how do we want our society to be?

George Lakey puts the polarization into historical context. Almost one hundred years ago, when extreme polarization existed in Europe, some countries moved to fascist dictatorships while others moved to socialized democracies. The difference was how the people organized and mobilized. Lakey suggests a road map.

If people who consider themselves left or progressive fail to organize and mobilize, we may go the way of a fascist dictatorship no matter who wins this presidential election. If Trump wins, he may do what others have done by trying to further consolidate his power into an authoritarian state. If Biden wins, and he continues the neoliberal and repressive policies that have marked his 47 years in elected office, then the conditions will be created in 2024 or beyond for another Democratic Party loss and an opening for a right wing leader who is more effective than Trump at consolidating power.

Either way we must mobilize and protect our rights. While most of our organizing will take place outside the electoral system because that is where we have power, it will also be necessary to focus on preserving whatever democratic rights exist and strengthening them. 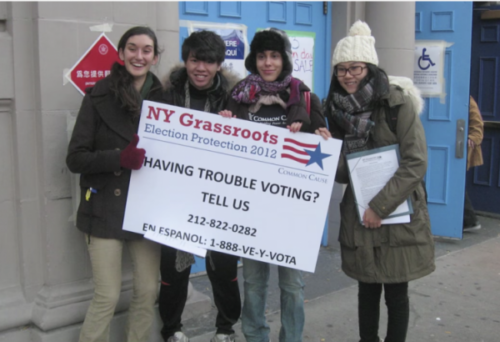 Protecting and improving the election process

As flawed as the electoral process in the United States is, it is the system we currently have. Fair election and third party activists have been working to change it for decades. Now, as it is on so many issues, the major problems with that system – voter suppression, lack of transparency and the process for choosing a president – are more evident.

While the United States has never been a democracy, in fact a look at the founding of the country shows the ruling class who wrote the Constitution were afraid of it, the people believe in democracy. Focusing on democratic rights in this election will bring people together and build momentum to change the system.

Focusing on what President Trump says is a distraction. Recall that Trump was also saying that he would not commit to accepting the outcome in the lead up to the 2016 election. The Democrats and the groups aligned with them are amplifying fears to drive voter turn out, and it seems to be working. The latest Gallup Poll finds almost 70% of registered voters are enthusiastic about the election, which is an increase from the 50% who were enthusiastic in 2016 and similar to 2008 levels. This is highest among registered Democrats.

Five Thirty Eight predicts that due to the electoral process in a few states, for example Pennsylvania is not allowed to start counting mail-in ballots until Tuesday, and the way the states are looking right now, neither of the major party candidates could reach the required 270 electoral votes on election night. It could take a few days.

This is not cause for panic. Instead, let’s take a collective deep breath and watch for problems with the process in our states. Documenting these can be used to challenge and improve the process for the next round. Already, people have been challenging the election process with more than 300 lawsuits filed in 44 states.

There is a small chance that President Trump will be re-elected. If that happens, it will be critical to respect that result. To reject an outcome of the election process we have opens the door to a breakdown of that system and a vacuum that could threaten the hope of building more democratic structures.

Remember, no matter what happens on November 3, our struggle goes on. It is a long term struggle against deeply entrenched structures of racism, capitalism, colonialism and imperialism that will have successes and failures. Our best chance for a better future is to keep our eye on the world we hope to create and keep working toward that goal.