Last Thursday, people from Oakland and the Bay Area carrying chalk, brushes, and buckets of paint, took over and painted 14th Street in downtown Oakland. A group of grandmothers who call themselves 1000 Grandmothers for Future Generations set up blockades on both sides of 14th Street, directly next to the Oakland Federal Building.

Kimi Lee, leader with Bay Resistance who co-organized the street mural said, “We have to prepare ourselves to defend the election and democracy. We may not know results on Tuesday, and the election could get dragged out for weeks or months. November 3rd is not the end of our fight, it is just the beginning. This mural is a call to everyone that we need to choose to defend democracy and build the kind of world that we want together.  Art and music are so important right now to give people energy and to bring us together. We hope that this mural inspires others to come out and join us.”

Marge Grow Eppard, an indigenous (Miwok) organizer and leader, opened the mural with prayer, then painted the first brushstroke on the street with red clay paint. She said, “This is Ione clay from my people’s land up in Amador and Calaveras Counties.” The background of the mural was painted with this natural red clay paint from the foothills of the Sierra Mountains.

Kazu Haga, of East Point Peace Academy, the other event coorganizer, says, “People need to know that upholding democracy is not something we do once every four years. Especially in a time like this when democracy is being threatened, we need to be out there before and after Election Day to continue to put pressure on this administration, to let them know that we’re not going to simply let them steal this election. The more we can rise up and let our voices be heard leading into the election, the harder it will be on them to try and steal it.

Street murals are an amazing way to combine resistance work with creation work. It’s a direct action – we didn’t ask for permission to do this. But it’s also about putting our vision of what we want out there to the world. It’s a direct action that gets everyone – grandmas to children – directly involved, moving their bodies and creating with us. We’re not just sitting around listening to a speech. We’re all literally part of the movement.”

Street Mural History: The Climate Justice Street Mural Project has been working with communities and movements in the San Francisco Bay Area for the last eight years to teach how and to help paint giant street murals with clay and non-toxic tempera paints, including as part of  last year’s climate strike. Kicked off by the  Washington, D.C. giant  “Black Lives Matter” street mural words painted in June 2020 directly in front of the white house by DC Mayor Muriel Bowser, people in cities all over the US and Canada have painted, and innovated their own Black Lives Matter murals.

Each of the 12 circle murals was designed and painted by a different community group. They were asked. “What does democracy look like?” 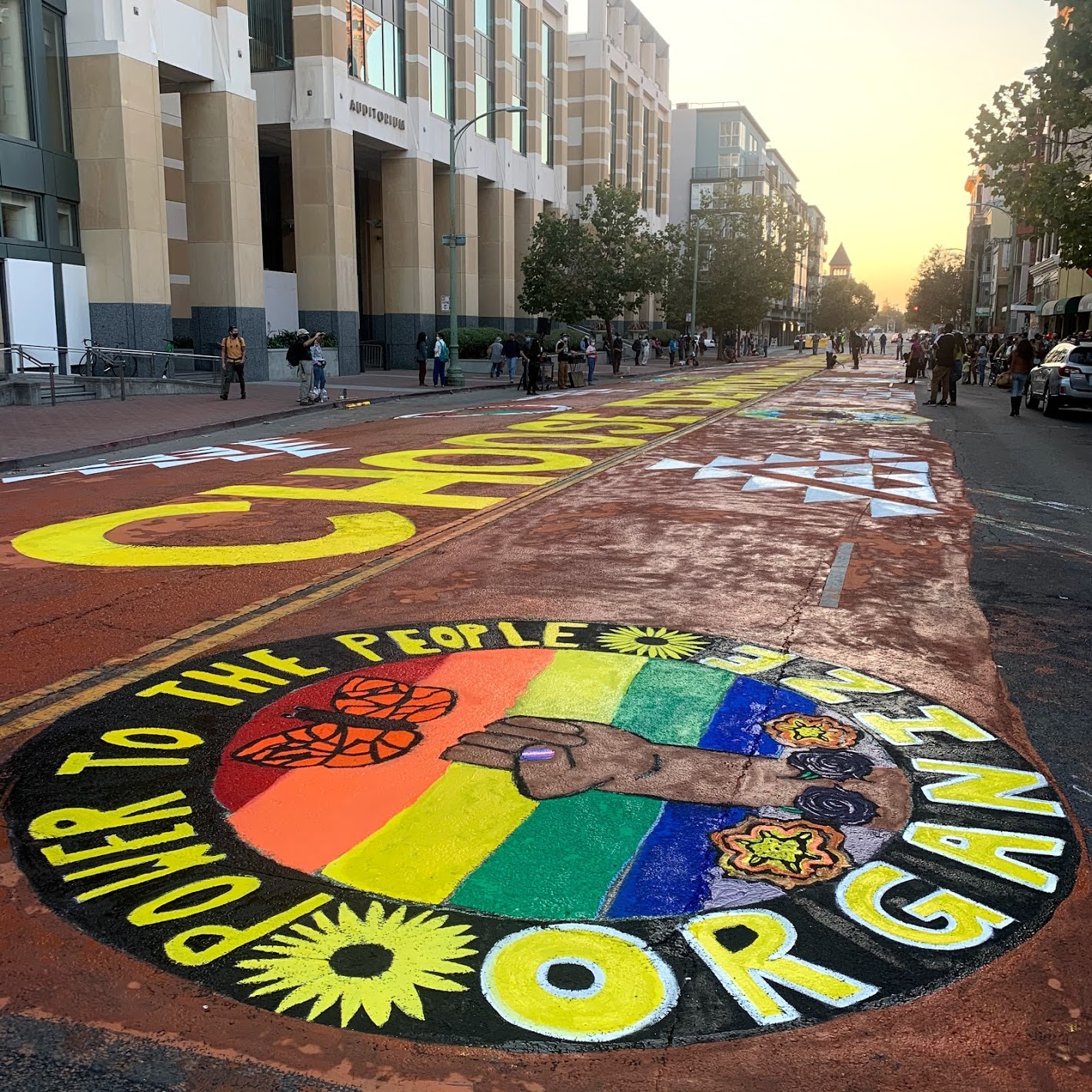 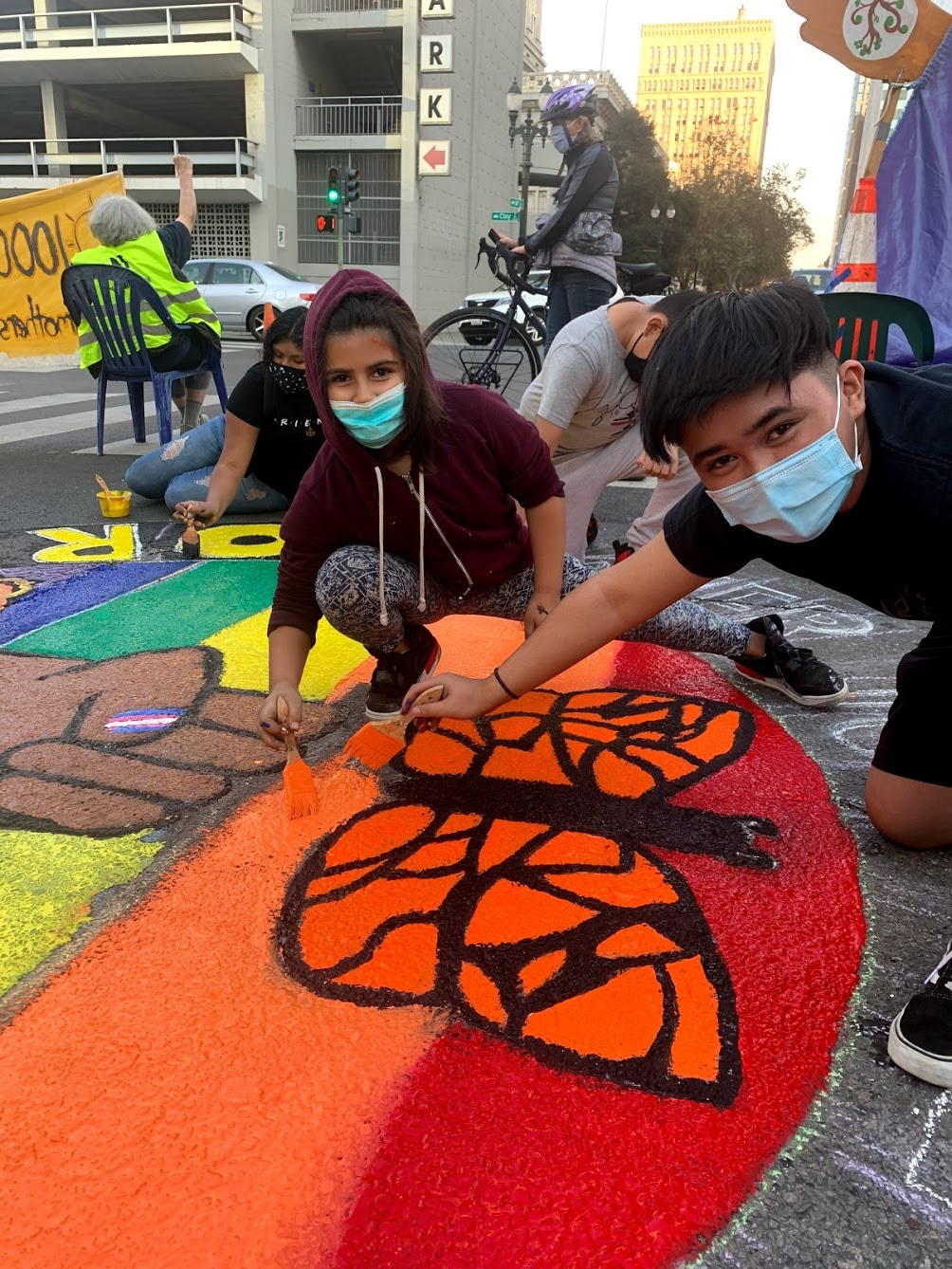 What does democracy look like for youth? It is intersectional, involves all power to the people, and organizing! Sunflowers represent climate justice and the organizing work we do with Youth vs. Apocalypse.  This is the time for youth to take action. The black background and yellow lettering of the lettering represent the movement for Black Lives (Black Lives Matter & #SayHerName). The background is a rainbow for LGBTQ+ rights and the fingernail for Transgender rights. The fist represents the legacy of the movement, the strength, and power of working together. The butterfly represents migrant rights. The cempasúchiles honor Día de Los Muertos, the ancestors, and those lost to violence. The purple roses represent an end to the sex trafficking of womyn and children (Af3IRM Purple Rose campaign and transnational feminism) and is also similar to our Warriors for Justice logo, part of our origins.

We were joined by our community, youth ages 6 to 18, including newcomer students and student with disabilities, current and former staff from Urban Promise Academy, alumni, and family members to make this project happen.  The lead designer was Santiago Olin, and the lead design team included Quetzali, Iyyah, Michel, and Tiyana.

Warriors for Justice was formed in 2015, by middle school aged youth from Urban Promise Academy in the Fruitvale district of East Oakland, to fight for our rights, build leadership, make a difference in our community, address the issues happening in our world, and let our voices be heard. 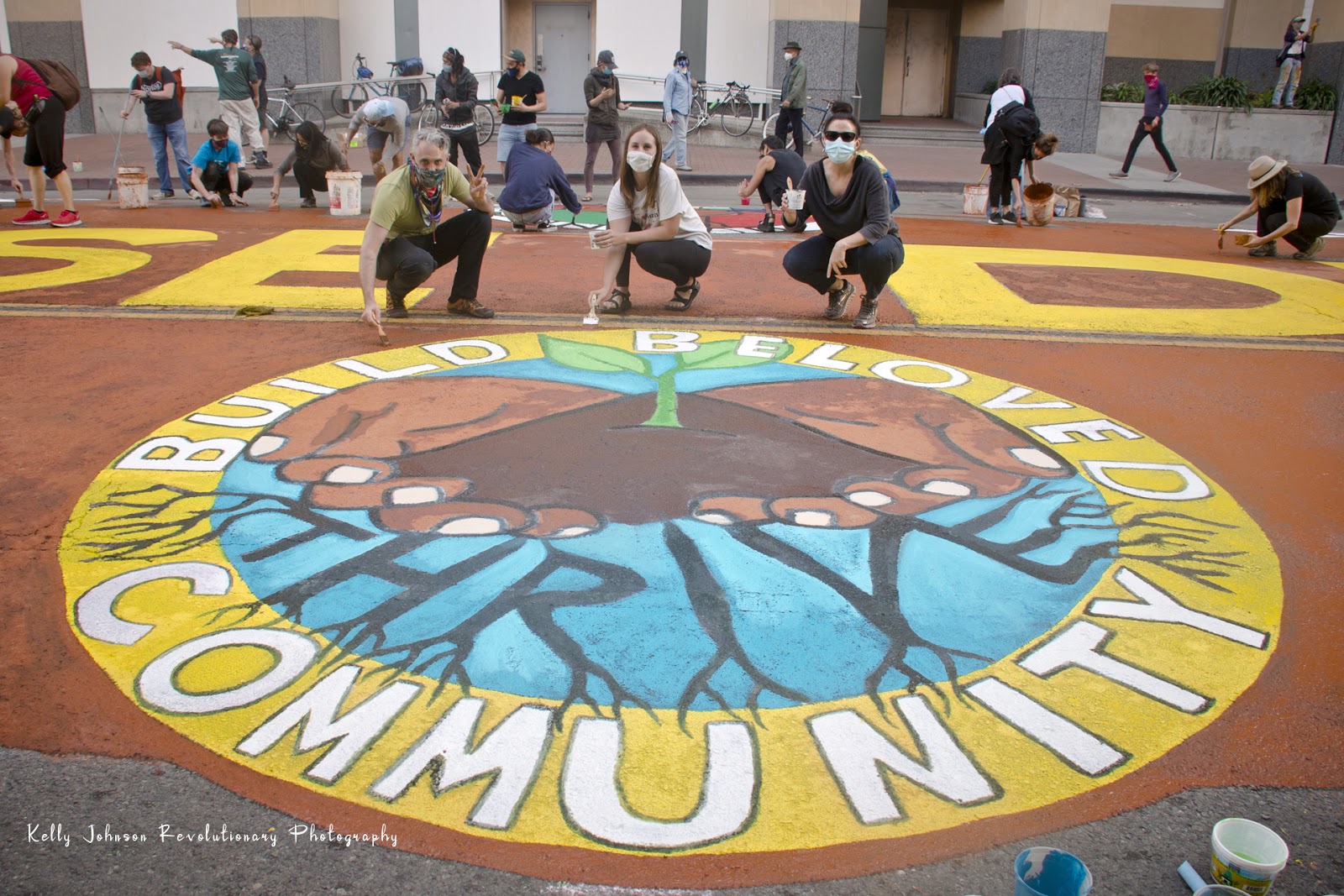 We, at Thrive East Bay, designed a mural to lift up our goal to build Beloved Community, in which we reach across the divides to heal, create art, sing, make meaning, take care of and uplift each other so that we can transform our pain into possibility. We depicted a sprout growing from fertile soil, held tenderly by hands, with roots reaching down because in the midst of chaos and uncertainty, we want to affirm life and we know that it “takes roots to weather a storm”. We painted our vision in the streets along with hundreds of other beautiful people, singing and praying and weaving our visions together, because we know that our joy is power and it will take all of us to compost this death culture and build a world in which everyone belongs. 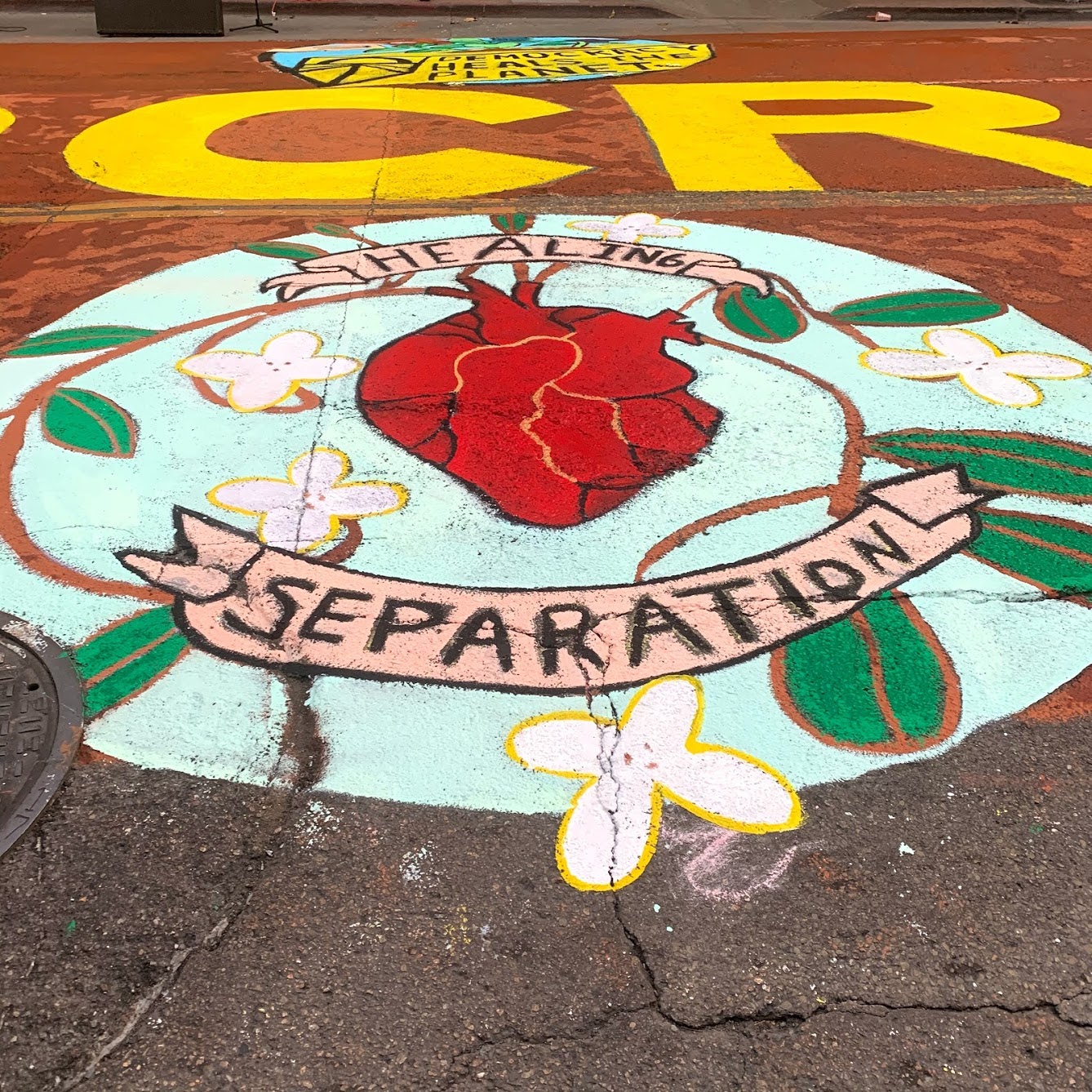 The Yet-to-be-Named Network is a constellation of direct action teams positioned at the intersection of racial healing and climate justice. Our mural envisions “democracy” as a dynamic and relational process. By building trust and finding common ground differences and divisions can be respected, navigated, worked with and worked through. In this way democracy can be a catalyst for the healing of separation. 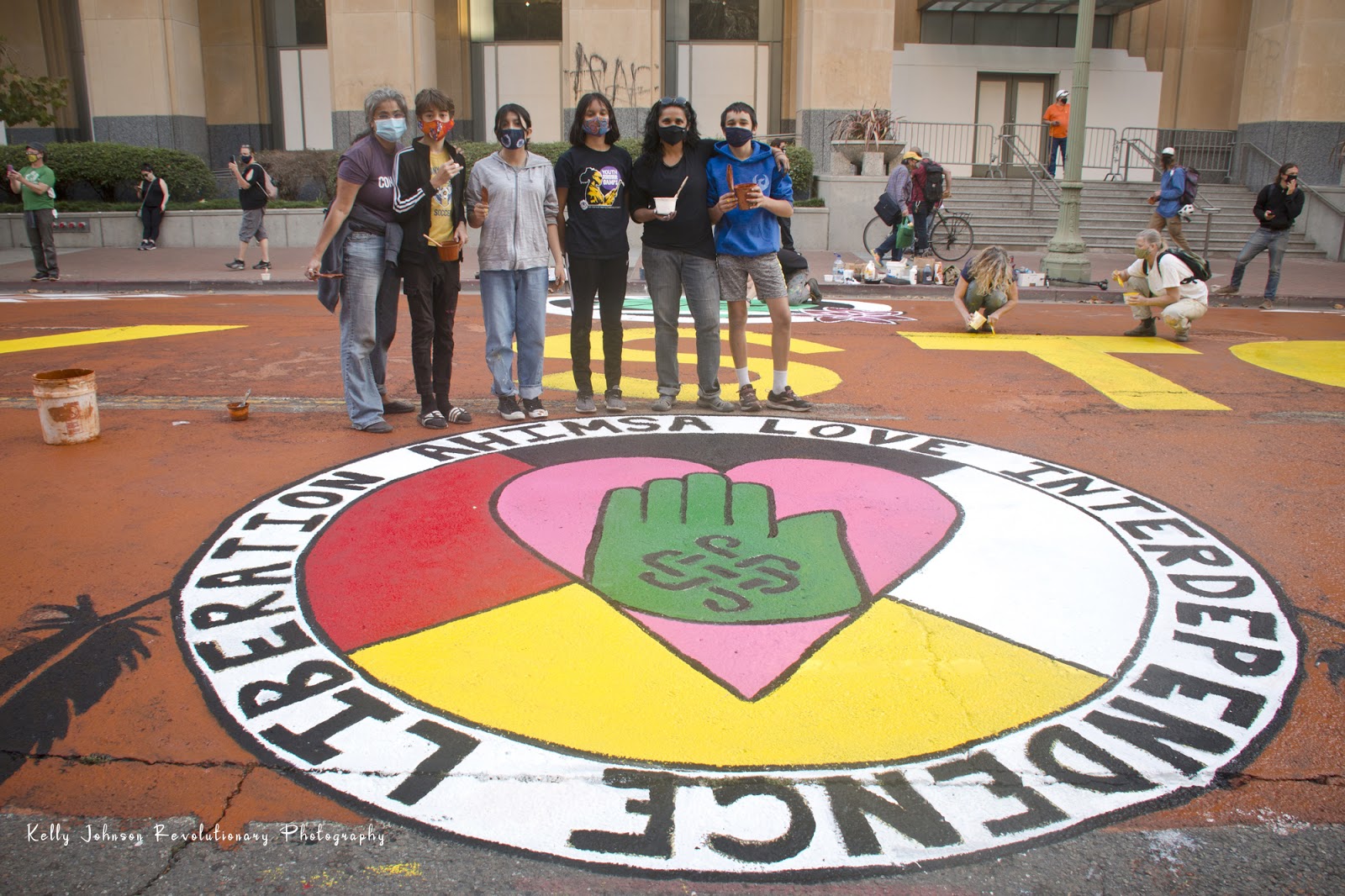 Participating in the mural was an important moment for us to channel our feelings about the elections and state of the world into a creative and collective act. Our team of nine: youngest 12 and oldest 73 just jumped in, and we got into the rhythm with each other to paint these symbols and words of love, ahimsa, interdependence and liberation. The magic four which are at the core of our values, and we think at the center of a truly free society. 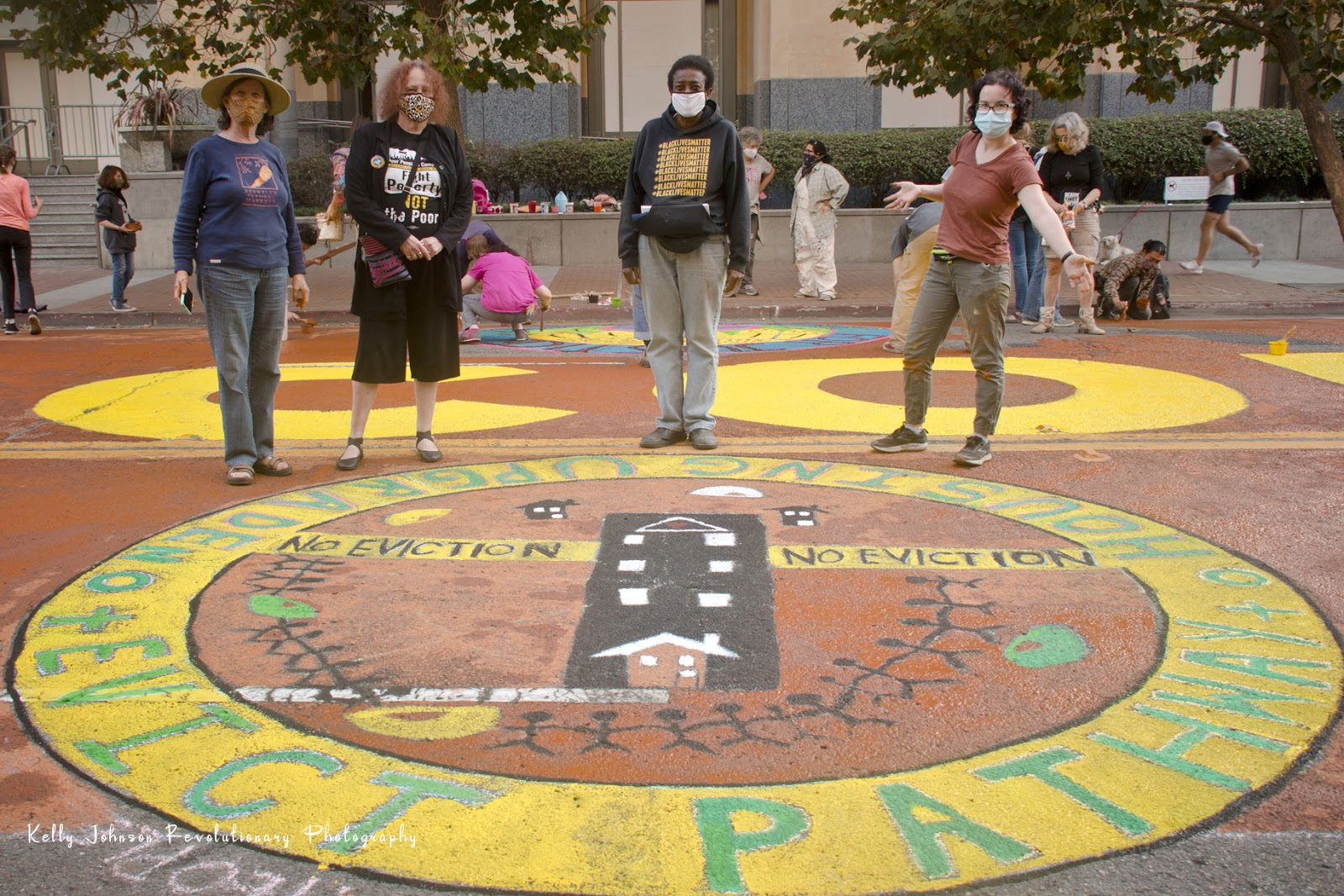 Poor People’s Campaign: A National Call for a Moral Revival California Bay Area chapter is part of a national movement in over 40 states organizing to end systemic racism, poverty, ecological devastation, the war economy and the distorted moral narrative that blames poor people for their poverty. Everybody’s got a right to live. Nell Myhand added, “Grateful for the coming together-to meet, learn, sing, build, collaborate and create. Powerful reminder to be doing this all the time – good times, challenging times, and all the in between times.”

Cardboard and Concrete Unhoused Artists Collective spotlights the skills and imaginations of displaced communities. Poor and unhoused people are facing evictions and increased criminalization in the midst of a global pandemic, a nationwide housing crisis, and looming evictions, which further jeopardize the livelihood, future, and stability of the most vulnerable. 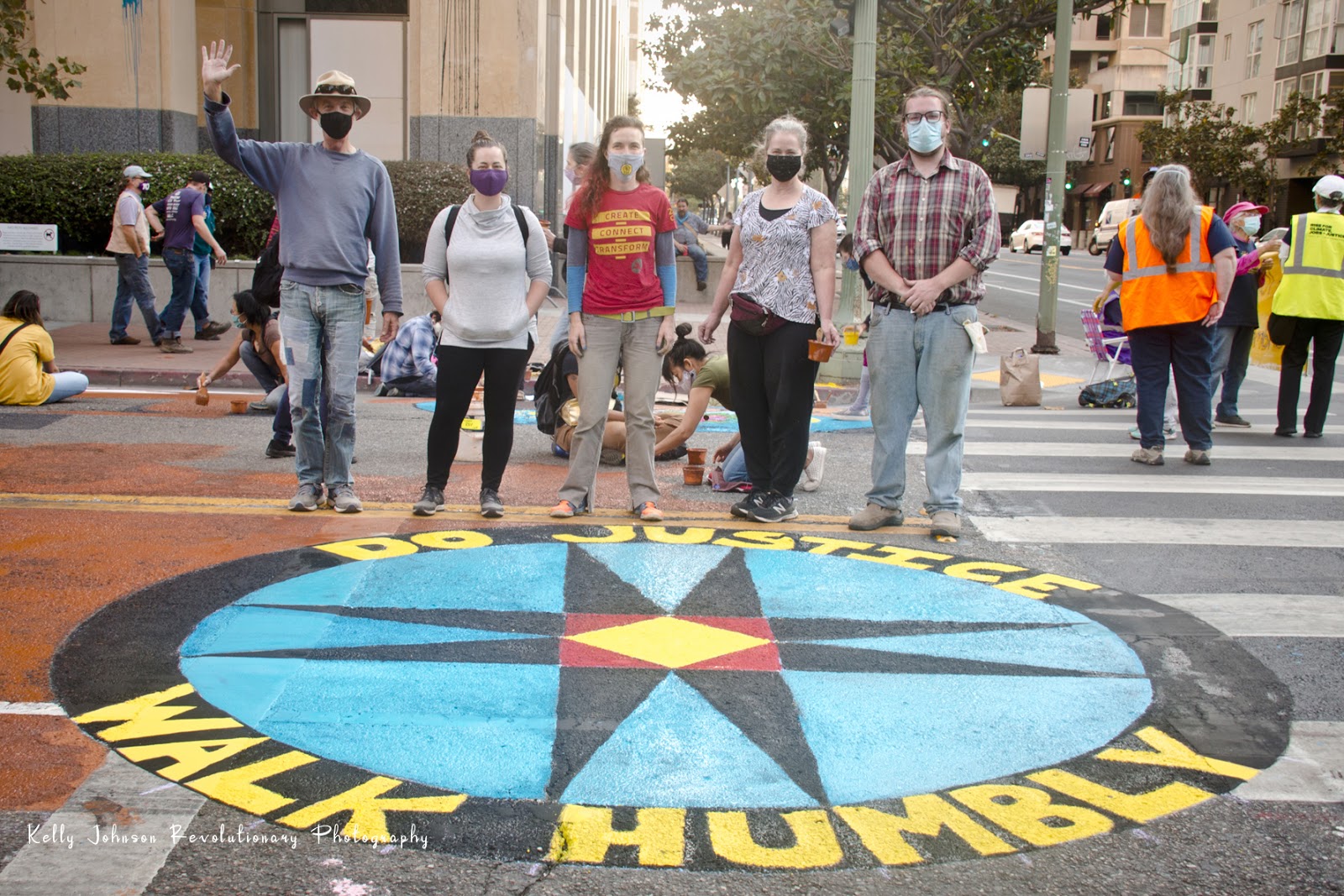 First Mennonite Church of San Francisco chose a quilting block design for its circle on the “Choose Democracy” street mural for several reasons.  In the Mennonite/Amish tradition, quilt making has always been a collective and egalitarian activity. Within our congregation people from across the gender and sexuality spectrum create quilts together: for new babies in the congregation, for refugees, and to raise money for humanitarian work around the world.

As a design form, quilt blocks are fractal, and a fractal-based design arguably provides the optimal institutional design for a democracy.  Finally, the Amish eight-point star coincides to a striking degree with the Lakota star, which derived from early buffalo robe designs. We haven’t researched the specific origins American Mennonite and Amish eight-point start quilt design, but we would welcome any link between our culture and Indigenous culture, whether that be direct or coincidental. 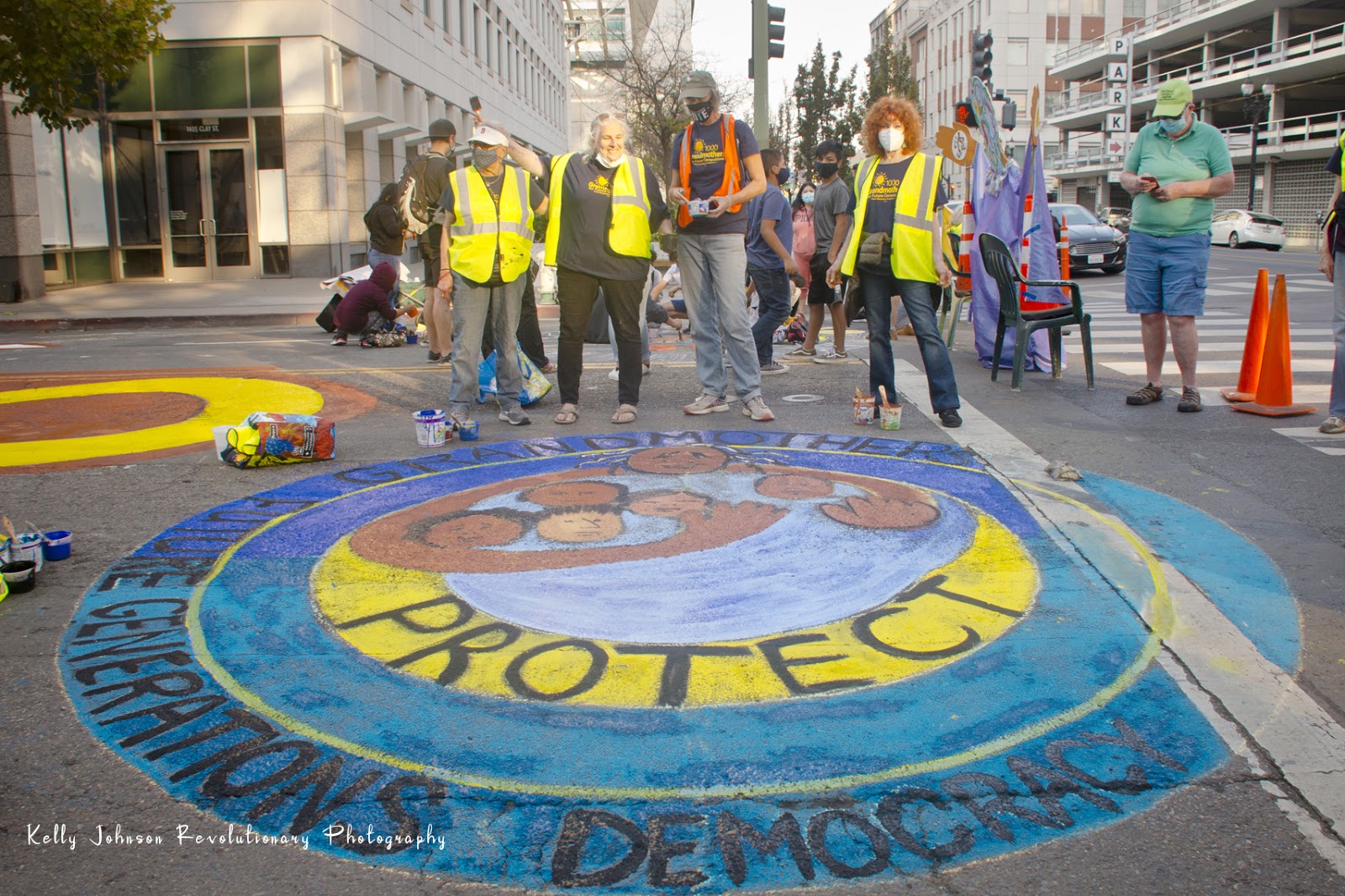 In the middle of painting the 1000 grandmothers mural, several young kids from the Warriors for Justice came up to ask if they could paint with us. These kids who were newcomers to the US, sat down and started painting with us: a design of a grandmother circling the youth and many faces holding them in her embrace,  grandmothers protecting democracy. It was so moving to build this piece of art together, this message of generational and racial hope and possibilities for a just future. Fast friends and allies. 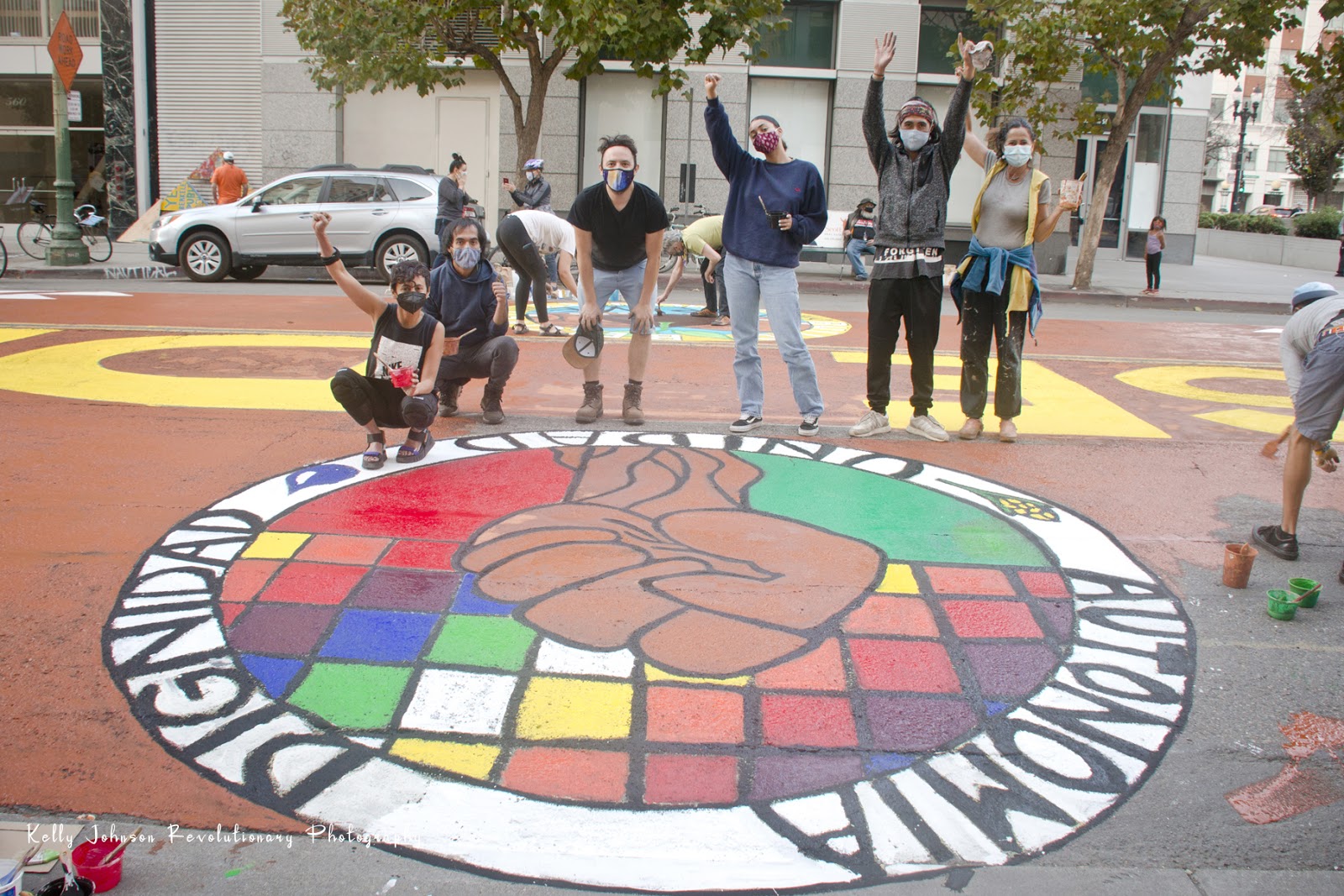 It was really inspiring to share the street with a wonderful set of activists and artists. This all made us dream about the democracy we reclaim as new generations ready to empower people for change. We are the fourth sister… Our mural honored the recent uprisings and victories of the indigenous, workers and peasants in Chile, Bolivia and Colombia. The whipala symbolizes unity, collective, in the geographical and ethnic diversity of the Andes, it’s the pachakama and the pachamama. With unity, autonomy and dignity, people in the Americas, together, will forge a new sense of democracy. 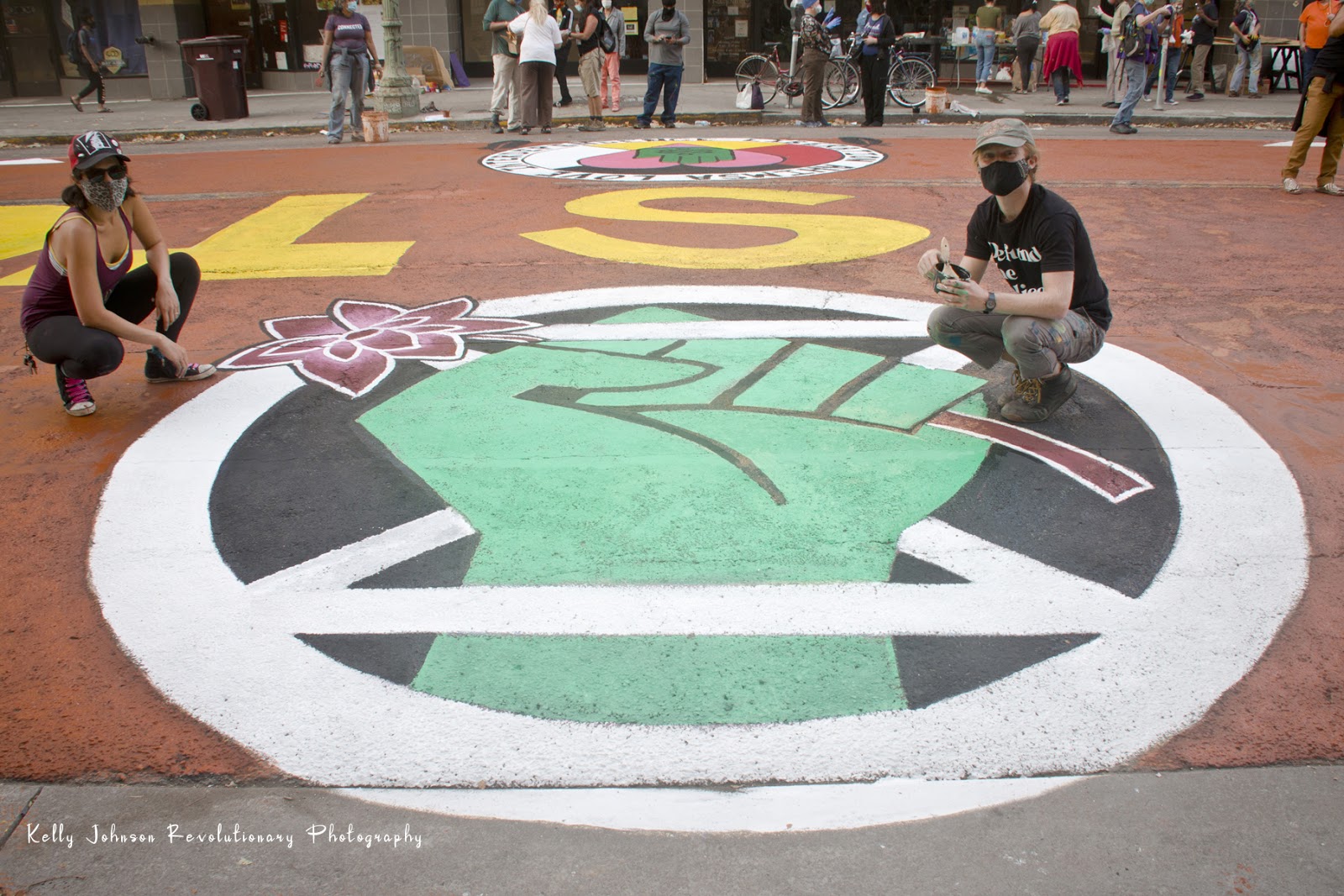 “We came together as a community to do something only a community could do — foment massive art subversively springing to life in a quick afternoon. The green fist in our design represents a broad coalition coming together to stand up to racial and environmental injustice. The lotus flower blooms in muddy water, signifying the opportunity for beauty to bloom out of cataclysmic circumstances. We feel grateful to be part of a coalition of regular people who are unwilling to sit down and shut up in the face of systemic injustice.” 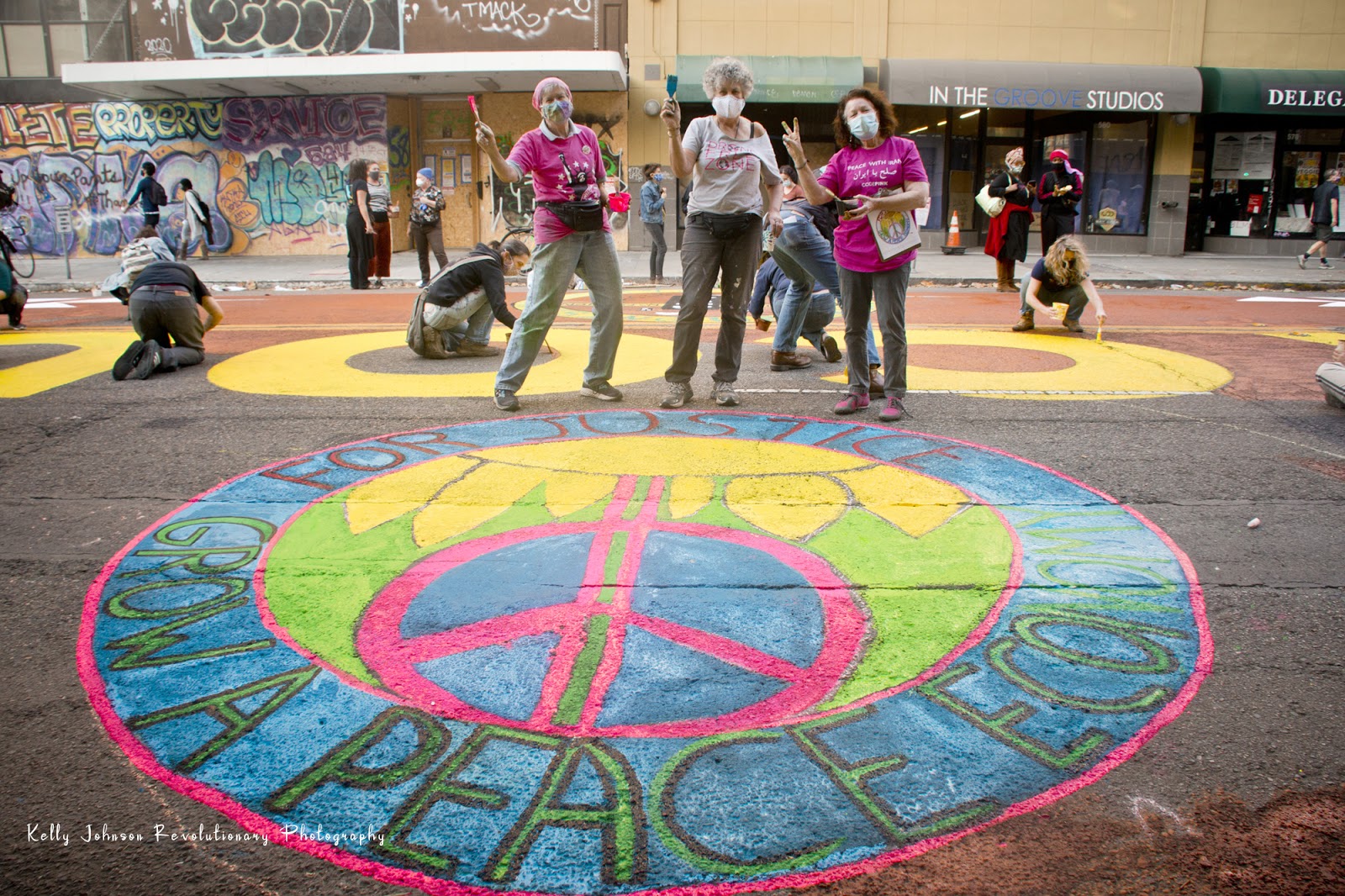 Code Pink Golden Gate is so grateful to be part of this beautiful, vibrant, unabashedly political giant street mural. We reclaimed the commons to paint a gorgeous billboard in downtown Oakland with our “visions of democracy in our community”.  1000 Grandmothers closed off the street, there were DJs, peacekeepers, musicians, poets, and beautiful intergenerational camaraderie and teamwork.  Our mural theme illustrates a major CodePink campaign– defunding the war economy and growing a peace economy. Our message is “FOR JUSTICE… GROW A PEACE ECONOMY”. 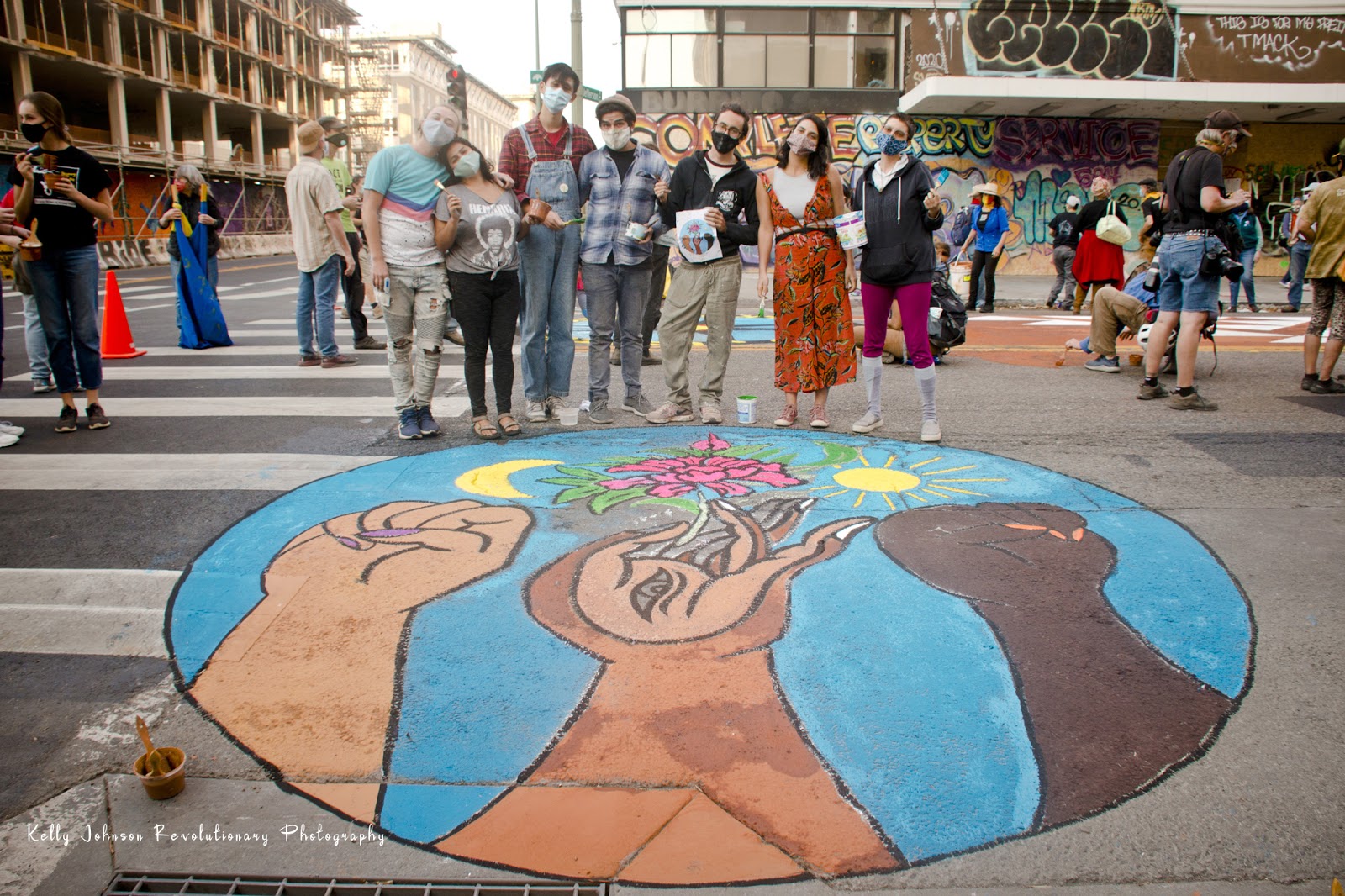 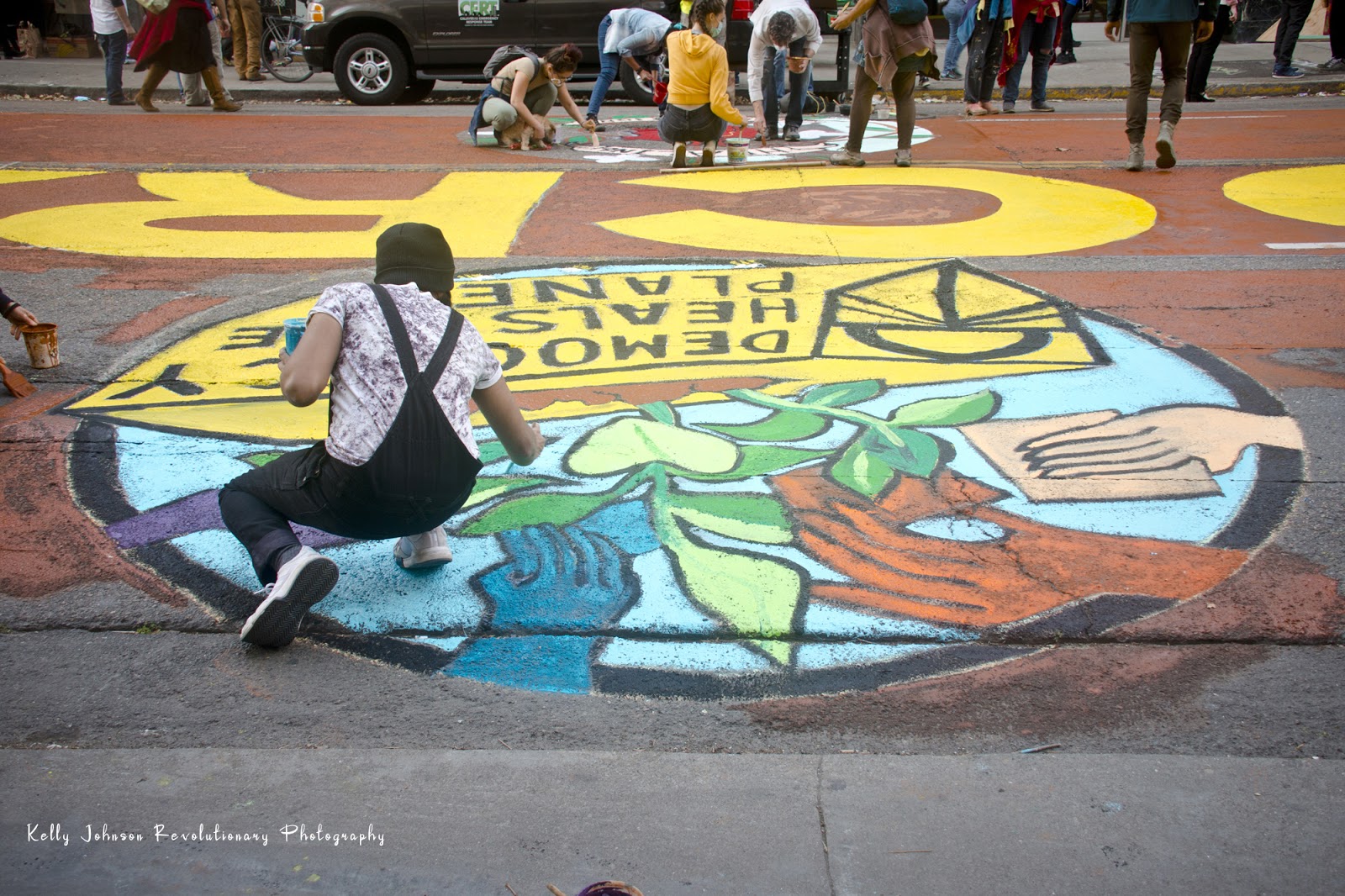 This mural is a manifestation of the fear of a coup that our generation is stricken by. We are determined to uphold the tenets of democracy even if this president is not willing to commit to a peaceful transition of power. People power is the true power and we will continue to organize and make our voices heard.

Unifying Basket Design This triangular basket pattern designed by Edward Willie unifies the 11 murals. “I am honored to represent indigenous California in this project. This design does not represent any specific tribe. But it is inspired by the basketry traditions of native California.” Edward Willie ( Pomo/Wailaki/Wintu): 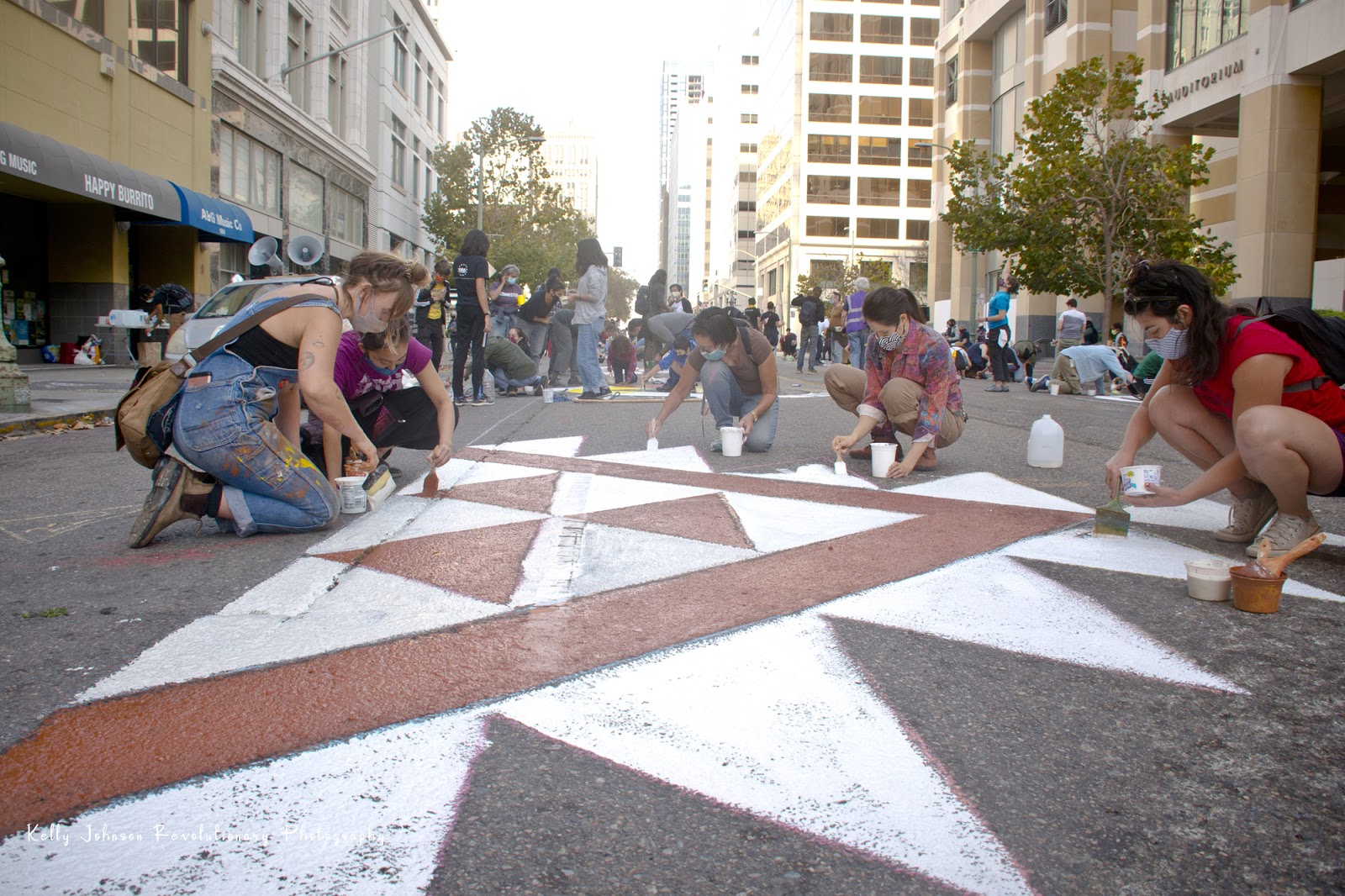 SONGS TO STOP A COUP

Lu Aya of the Peace Poets—a leading performing and song leading group for social change movements—led us in songs as we painted, teaching us a new set of “Song to Stop a Coup.” This set of 5 songs created in conversation with ChooseDemocracy.us and other national organizers preparing to defend democracy with possible mass nonviolent direct action. The 5 songs available on Youtube with lyrics are designed with different purposes needed to keep an action strong and effective; A Force More Powerful is for de-escalation, We Choose Democracy is to face a hate and to energize, Defenders of Democracy is to unify, motivate and express resolve, Down to the Ground can be used to literally signal sitting down and holding ground, Stop this Coup is energizing and unifying with these words:

The People Are Peaceful
We Know What To Do
We Rising up Together
Til We  STOP THIS COUP!