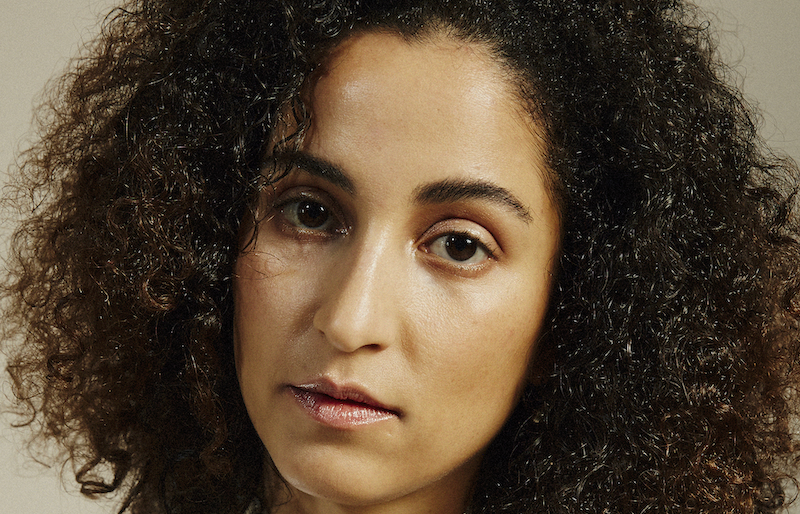 Filmmaker Sylvie Weber on letting ideas unfold naturally, creating a framework to elevate underrepresented voices, and learning as you go.

Your short film, The Prophetess, tells the story of two resilient women in the Democratic Republic of Congo who support each other on their journeys of healing from experiences with sexual violence. How did you land on this subject?

This project came about as a result of a commission by Journalists for Human Rights, an organization that trains aspiring journalists to cover human rights stories objectively and effectively. I was commissioned to do a training workshop in collaboration with a local journalism school, called Ecole technique de journalisme, in Bukavu, located in the South Kivu province in the Democratic Republic of the Congo, where we shot the film. The workshop focused on video journalism, which isn’t an easily accessible profession in the Congo—or elsewhere—since video equipment is quite expensive and there isn’t really a defined path to becoming a video reporter.

Since we planned to spend six weeks in the country, we came up with the idea of using that time to shoot a film as well so the students could get hands-on experience working on a film project. That’s when I started digging for stories. Most of the documentaries about the Congo that I knew of were shot through a male lens and focused on conflict minerals, like coltan and diamonds. There weren’t many that addressed one of the biggest weapons of war—sexual violence. In the Congo, rape is used to suppress communities and take control of certain territories. It has been a common tool of war across the world. This part of the story seems to have fallen off the radar. Through our location manager, Salomon Balangane, who had previously worked on documentaries in the Congo, I came across Centre Olame, an organization providing support to women who have experienced sexual violence in the South Kivu region.

I’ve always been interested in telling stories that elevate and empower women, and since the students at Ecole technique de journalisme focus on human rights issues, it was a topic that was also dear to them. Our collaboration has become a long-term project and I’m still mentoring some of the journalists. Before arriving, it took me a year to research and gather insight from people and professionals of Congolese heritage before I could allow myself to help tell the story… because I’m not from the Congo. With the ongoing collaboration and especially the encouragement from many locals, I guess I was able to justify making the film in addition to there not being many stories about women—told by women—from the Congo. So, the project didn’t come from me saying, “Okay, I want to go to the Congo.” It kind of came to me and just fell into place organically.

The two protagonists, Furaha and Venantie, aren’t professional actors. In the film, they speak candidly about their own personal traumas. What did the process of developing the script alongside them both look like?

By the time we arrived in the Congo, I had already had several conversations with the women through Centre Olame. Our production manager was visiting their remote villages to have conversations with them about the project prior to the shoot. Since they didn’t have access to phones and he spoke the local dialect, he acted as the go-between to communicate their stories, which they wrote down on paper.

For me, the most important thing was to build a framework so that they could tell their own stories. It was equally important to me that the fictional elements in the film spoke to them as well. We met a couple of times in person before shooting, but I was also prepared not to shoot in case I felt the slightest energy of doubt from them. But they really wanted to work together because, as they said, no one has ever shown interest in hearing their perspectives.

We shot the part where they spoke about their personal experiences with rape on the very last day. I didn’t want to start the shoot with a certain heaviness and felt like they should have as much time as they needed with it at the end. I wanted them to feel safe and comfortable—with us and the cameras—from the very beginning.

How did you decide on the documentary-fiction form for the film?

During my research, I read a lot of literature, spoke to locals, and watched some Congolese films that were either traditional documentaries or blockbusters. As someone who isn’t from the Congo, I felt that the only way I could help tell the story is by showing it through a different lens. I’ve never liked the idea of foreign teams going into a country to tell the stories of people whose lives have been heavily affected by war. I always found it quite difficult to tell stories with this kind of documentary-style where you feel the distance between the two parties—I was trying to minimize this gap with the film.

I realized the only way for me to do this was by telling a semi-fictional story that focuses on the beauty of the country and the power of the people, instead of their suffering. So I wrote the script based on Furaha and Venantie’s stories and framed their narratives with fictional elements that covered certain topics to make the film cohesive, but left room for their own words in each section. Then I came across the incredible warrior woman Kimpa Vita [who led a religious movement in the early eighteenth century in an attempt to unify the Kingdom of Kongo]. I saw so many parallels between her story and the stories of Furaha and Venantie. Since Kimpa Vita is kind of a mythical figure, her storyline became the connecting link in the film.

The dialogue between Furaha and Venantie is incredibly raw, tender, and vulnerable. Did those parts involve improvisation?

Yeah. I gave them both some cues for certain topics but I didn’t script any of the dialogue. Everything they said in the film was their own words. For example, in one scene, there’s a conversation about paradise and before shooting I asked them to imagine what paradise would look like for them, what they longed for, and how they would describe the feelings of being in paradise. They felt so comfortable talking about this that it seemed like they could actually see these visions right in front of them. I was in awe of how everything worked out so naturally.

Collaboration is so important in filmmaking. What are some of the things you’ve learned over the years about creating a team dynamic that thrives?

What did Furaha and Venantie think of the film?

The film was shown at a church in their community, organized by Centre Olame. It had to be in a safe environment because it could have been dangerous to screen the film publicly. They both really liked it and that to us was the most important and reassuring thing.

When did you know you wanted to make films?

I grew up in a small town in the German countryside, near Lake Constance. It wasn’t a very creative environment but I felt like I wanted to do something creative even though I didn’t know exactly what. I ended up studying theatre, film, and media in Vienna but the program was mostly focused on theory and film history. I loved Italian neorealism, Iranian films, and old Hindi cinema, which inspired me to study in Pune, India—that’s when I really became interested in the representation of women in film and making films. But the idea of trying to make it in the film industry frightened me. In Vienna, when I was assisting on film sets, everyone basically told me that, as a woman, it would be nearly impossible to become a director. So, to me, the path to becoming a director seemed long and abstract.

In 2012, I moved to Berlin and I started working at a production company as a videographer. That’s where I really learned how to shoot and edit. At the university in Vienna, we only had one class where we learned more about the practical aspects of filmmaking. I definitely went the self-taught route and was just trying to make a living through creating videos. At some point though, I realized that I wanted to move more into directing because being a videographer involved too much work—I was constantly concepting, shooting, and editing under pressure. It wasn’t worth it in the end.

You’ve directed music videos for artists such as The xx and Melanie C, among others. How did you break into that space?

It was a coincidence, really. I wanted to do that so badly but didn’t know how. No one really talked about how to enter the industry. At the time, there also weren’t many female directors in the German film industry, especially not women of color. I’m realizing that role models are so important in being able to see and understand what’s possible. To me, becoming a director was such an abstract idea. I didn’t know how to do it, but I ended up shooting one music video unexpectedly. There was no budget, but it turned out okay. And from there, I slowly continued to do more.

Do you treat your art practice as a business? How do you balance making a living and doing creative work that is artistically fulfilling?

At some point after my studies in Vienna, I realized that I couldn’t do all these side jobs anymore. I’ve worked as a waitress, a hostess, and an employee in a factory along a conveyor belt. I thought, “If I don’t take myself seriously, no one will.” I knew it was going to be hard but I felt like I had to focus on film. It’s still difficult and I’m learning about the business and politics of the industry every day.

Most films I make aren’t very satisfying, it doesn’t give me much to make another product video about a shoe, or whatever. But that’s how the industry works and I know I can’t always be selective. Sometimes you just have to get your name out there, which I’m not very good at since I don’t socialize or promote myself much. I’m a private person but I learned that I have to do a bit of this kind of work to get some visibility. It’s just the reality of working in film. Now, I’m trying to make a living with commercial jobs and then trying to focus on shorts and feature films or other personal projects when I have time. The biggest internal struggle for me is learning to set aside time to just write for myself.

As far as your creative work is concerned, how do you define success?

These days, we’re flooded with so much media, videos, and images. So, even if just a couple of people feel something, or see a different side of history, I think I’ve succeeded a little bit with a film. Right now, I’m interested in overlooked or untold moments in history and topics such as racial injustice. I do really believe in communal success—the ‘your success is my success’-mentality. And if I can contribute to the community in some way and elevate underrepresented voices through film, I’m happy.