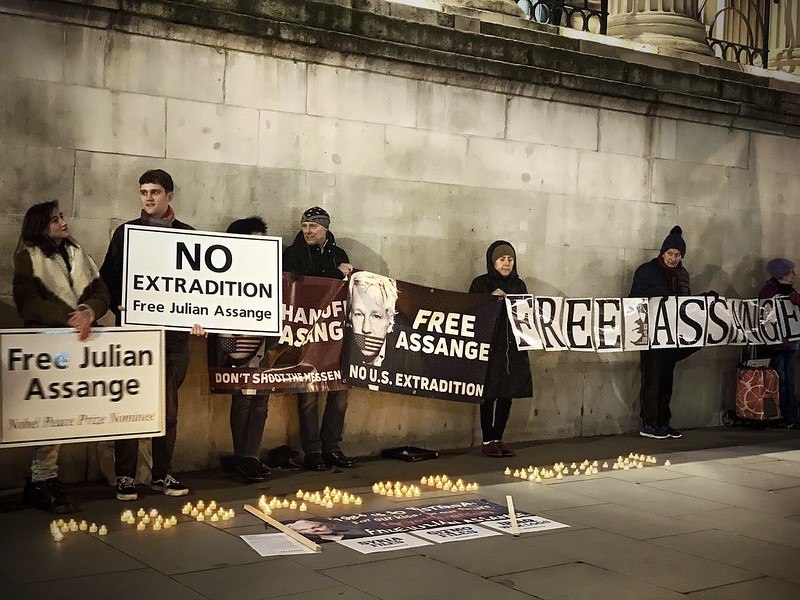 There is no need to inform the conscious world that the United States is applying all its power and influence to extradite Julian Assange from England in order to put him on trial in America.  The case against him is based on his having committed journalism in publishing leaked secret government information on Wikileaks.  While it is comprised of multiple charges, crafted with cynicism and malice in order to convict and imprison him for life, not one of them has any legal merit.

In truth, the case is not about commission of crime at all.  It is a cruel, vindictive scam by a shamed empire to punish an honorable and ethical man for having revealed damning truths about its barbaric behavior in brazen, criminal contempt for the laws of peace and war.

Material he published has shown the United States to have been blatantly and contemptibly false to its own people and the world.  That an individual could be framed and railroaded into a corrupt process contrived to punish him for exposing America’s monstrous crimes is a moral horror that beggars belief, and yet that is the unstated intention of the government of the United States.

Virtually the whole American and Western official press, including all  mainstream news organizations, both print and television and their reporters, have not only abandoned Assange as if he were guilty of something other than what they all routinely do much less well, but in their moral cowardice they have made themselves vulnerable to precisely the kind of dirty, dishonest state vendetta he is suffering.

What is most extraordinary about the astonishing length to which the American government has gone to persecute Assange, and the vast amount of money it has wasted on it, is the fact that all he has been accused of exposing, and has been so vilified and anathematized for revealing, is mere incidental trivia when compared with the vast body of America’s horrific state crime so long documented as proven fact, on the public record, and already well known to the entire world.

Beginning with the contorted sham that legitimized black slavery when its Constitution declared all men created equal, and the routine violation of sworn treaties which facilitated the murder of whole native peoples, America has lied, stolen, bullied, and subverted as state policy throughout its era of imperial aggrandizement and continues to do so well into that of its richly deserved, and now inexorable decay.

The extent of blind, mindless loyalty to, and deeply, stubbornly ignorant worship of, this rogue, dishonest nation that unstinting poisoning by infantile propaganda has wrought on the American mind is profoundly sad.  Our people never deserved to be traduced and shit on so brutishly.  Nothing can justify it.  It was done so that predatory, anti-life Capitalism could rape and fleece a people largely made crass, base, and stupid once decent values were replaced by the shallow, dead-end dogma of ethicless materialism.  Americans now worship the money none but a tiny few ever see, in thrall to a monstrous criminal racket that scorns them as mindless serfs.

So it is that information readily available that shows, with irrefutable clarity, the villainous history of this morbidly rotten, failing empire is almost universally rejected by a citizenry whose hope of any decent future depends on its absorbing and comprehending that information.  The catechism of rank bullshit marshalled for generations to cover the frauds, crimes, betrayals, invasions, assassinations and massacres that are America’s legacy has been exposed and documented for any mind not crippled and poisoned to see, and yet Americans have not had the mental or psychological capacity to take it in and act on it.

That said, it’s undeniable that more people have more exposure to more sound data than was ever conceivable before, and in spite of  Capitalism doing all it can to pollute all information streams, more Americans are more aware, if dimly, that Exceptionalist notions they’ve been schooled to embrace are somehow desafinado, as the bossa nova song had it: out of tune.  As the Presidential election nears, with the country facing a Hobson’s Choice between two defective, demented, old white shysters, and the nasty chore of electing another Congress of Pimps to represent their owners and sponsors, there is palpable disgust at the dysfunction of our polity.

This, though miserably painful to the spirit, is a good thing since it indicates a broad wave of actual recognition, an inchoate but definite awareness of the appalling depravity that the smothering gas of Exceptionalist propaganda has always concealed.  How many now feel this malaise due to dawning comprehension of the monstrous, anti-democratic, destructive force America has historically been cannot be known, but for a large percentage this has to be true.

Because America’s dark secrets are not secret any more, and haven’t been for decades.  The horror has been told, chapter and verse, in scholarly works that fill libraries, from barbaric rape of the Philippines and violent subversion of poor Central American countries reduced to money farms for Wall Street to the present kill list of Middle Eastern countries droned, blown up, devastated and destroyed by clumsily bungled wars run by stupid, sycophantic Big Brass Whores to feed the War Machine that our psychotic ruling cliques serve and obey.

All this being true, how is it that this sick, raging, giant monster of a nation can muster the free-floating fury to invest so much time and money to destroy one man who simply revealed a relatively minor snippet of its grossly criminal history?  Whence comes this obsessive madness?  It is the savage, vindictive mania of a failing empire.  Like the shameful sixty-year Cuban embargo, it harks back in spirit to the Roman slaughter of Christians or Nazi atrocities at Lidice or Babi Yar.  There is no force like humiliating failure to make a decaying empire lash out in insensate ferocity at an object that symbolizes its shame.

Assange is one of the rarest of men: those who put principles and personal honor above their safety or gain.  America may succeed in destroying him or unexpected justice may save him, but nothing can save this sick empire that has betrayed and fatally envenomed itself.