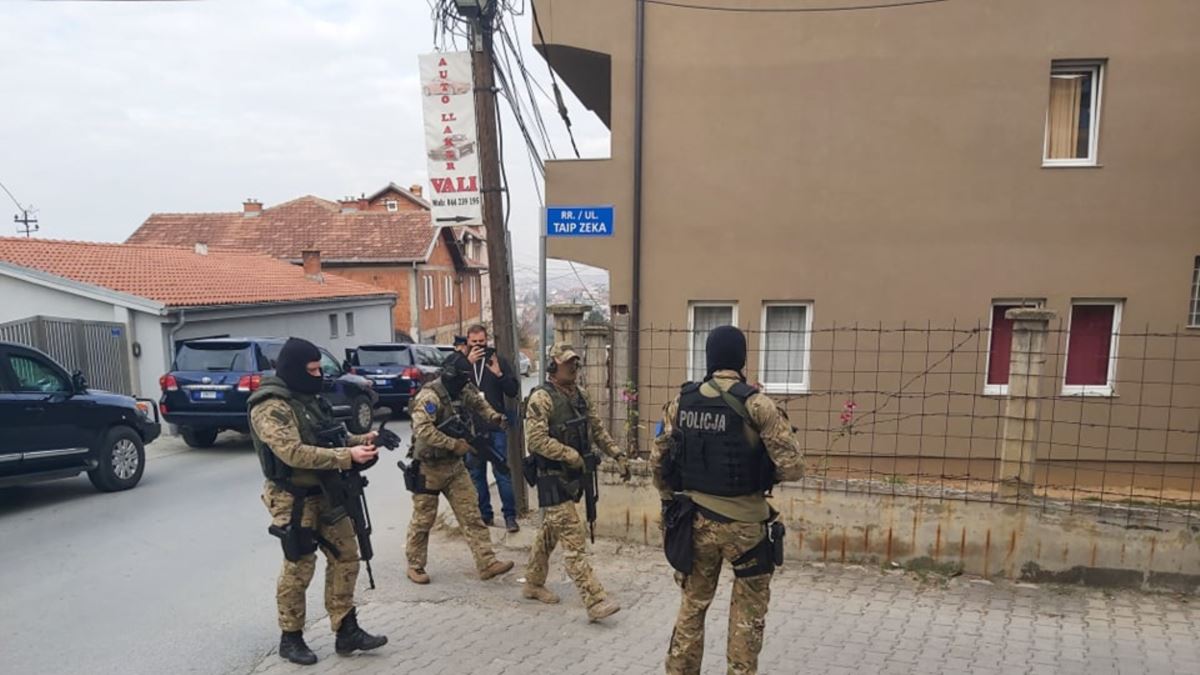 PRISTINA — The Hague-based war crimes prosecutors in cooperation with local police and the EU’s rule-of-law mission have arrested a former guerrilla leader and ex-speaker of Kosovo’s parliament during a special operation that began before dawn in Pristina.

Police and investigators took Jakup Krasniqi into custody after spending about 10 hours at his home on November 4 amid silence from the Kosovo Specialist Chambers (KSC) and Specialist Prosecutor’s Office (SPO) about the specifics of the Kosovar operations.

But a lawyer for Krasniqi, Vason Hasani, said the KSC had confirmed an indictment against Krasniqi and that they plan to transfer him to The Hague.

Hasani said he did not know the nature of the charges in the indictment.

Krasniqi is a onetime spokesman for the Kosovo Liberation Army (UCK) who rose to chair postindependence Kosovo’s parliament and even spent time as acting president dating back to 2011.

A brief announcement on the website of the KSC and SPO did not explain the goals of the operations. “More information will follow in due course,” it said.

The Kosovar government said it was following the conduct of the operations.

“Kosovo, the bearers of institutions, as well as its citizens have consistently set an example of respect and cooperation with local and international justice,” the government in Pristina said. “The presumption of innocence must be respected in any case unless there is another decision of the competent court.”

Krasniqi was questioned by SPO officials in July 2019.

His wife, Sevdije Krasniqi, told RFE/RL before the arrest that the authorities did not explain the operation and that she did not know why the investigators were at their home.

Krasniqi’s political party, the Social Democratic Initiative, responded to the events by saying, “the scenes today are unnecessary and traumatic for the family,” adding that Krasniqi had always complied with requests from judicial institutions.

The KSC and SPO were set up under Kosovar law outside the country to help probe possible atrocities during and after the Kosovar war of independence in 1998-99, and their operations are supported by Kosovo’s police and EULEX.

They are focused on alleged crimes committed by UCK members against ethnic minorities and political rivals during Kosovo’s violent separation from Serbia.

The SPO announced in June that President Hashim Thaci and other prominent Kosovars were the subject of an indictment on suspicion of serious crimes, including “nearly 100 murders,” enforced disappearances, and torture.

It reportedly had less than six months to determine whether there was sufficient evidence to bring cases to trial, a deadline that appears to have expired.

Two weeks ago, The Hague offices said that “there is good reason to believe” the president had been acting as part of a “larger strategy to undercut the court.”

Thaci has proposed amendments to Kosovar law that would give lawmakers there the power to extend the mandate of the KSC for another five years.

Kosovar’s independence war with Serbia left more than 10,000 people dead — most of them ethnic Albanians from Kosovo. More than 1,600 people remain unaccounted for. The fighting ended after a 78-day NATO air campaign against Serbia.

Last month the KSC and SPO made their first arrest, detaining the former head of the intelligence service of the Kosovo Security Force, Salih Mustafa, on the basis of an arrest warrant and a confirmed indictment issued by a pretrial judge of the KSC.