President Donald Trump declared victory early Wednesday morning while votes were still being counted all across the country.

At least, by signalling in advance that he would reject the election results if they didn’t favor him, Trump had diminished the impact of his own brazen stand.

Wisconsin was the only state to run a full recount of the presidential election in 2016, Wolfe pointed out, “and it showed that we have a really good process.”

Still, it was a breathtaking display in a country that still likes to think of itself as a democracy.

Over the last four years we have been numbed to the fact that we have a president who routinely lies and who has made a habit of undermining democratic institutions, from the press to the courts to the election itself.

Now those institutions are grinding away, in a process that could save our system of government—or sink it—depending on the vote count, potential lawsuits in Pennsylvania and Michigan and a recount Trump has threatened in Wisconsin, where AP and other media called the race for Joe Biden on Wednesday mid-afternoon.

Wolfe said that she is confident that “every single valid ballot was counted in the state of Wisconsin.”

“I think that we should feel really proud about the election that was conducted yesterday,” she added, “because there were some really trying circumstances this year. . . . our local election officials followed every rule with precision, and it’s really something that we should all have a great deal of pride in.”

Wisconsin was the only state to run a full recount of the presidential election in 2016, Wolfe pointed out, “and it showed that we have a really good process.” (That recount of nearly 3 million votes added just 131 votes to Trump’s margin of victory, cost Green Party candidate Jill Stein $3.5 million and uncovered no evidence of foul play.)

As for the Trump campaign’s spurious claims about “irregularities” in counting Wisconsin’s absentee ballots, the process is utterly transparent—with voting and vote-counting viewable by the public, and careful documentation of every step, Wolfe pointed out. There will be no ballots found in garbage bins or river beds.

Wisconsin Governor Tony Evers went even further in his condemnation of Trump’s claims.

“It is beyond irresponsible talk, but frankly, not unexpected talk, considering the source,” Evers said. “Our elections officials work so goddamn hard. And for the President of the United States, without any data to support him, to talk in that way about our elections officials and our clerks and our volunteers and  our National Guard. We had a great—and I’m not talking about the outcome—we had a smooth, smooth election under extremely difficult conditions, such as a pandemic. And for the campaign to say those types of things, it’s just more the same BS frankly. I’m really tired of that.”

The team of lawyers and advocates from national and statewide nonprofits dedicated to election protection pivoted on Wednesday from guarding against voter intimidation and interference with the delivery of ballots to getting ready for a recount. But the outcome is unlikely to change. Even Scott Walker—Trump’s Wisconsin chair—and former Representative Sean Duffy said so on Wednesday. And the Trump campaign appears to have given up on the recount, according to Jim Acosta of CNN, who reported that two campaign officials he interviewed told him the recount effort in Wisconsin would not “pan out” as there were not enough votes to swing the election.

Overall, Biden appears to be on track to squeak out a victory in the general election, despite Trump’s temper tantrums, while control of the Senate will likely remain, disappointingly, in Republican hands. In Wisconsin, Biden’s narrow margin of less than 1% is about the same size as Trump’s in 2016.

It is an unsatisfying end to our four-year national nightmare.

How could so many voters stick with Trump and his enablers in the Republican Party, after all his lies, his ignorant, destructive leadership, his disastrous mishandling of the pandemic that led to tens of thousands of preventable deaths? After his overt encouragement of violent racists? After the horror of family separation on the border, which left 545 children permanently stranded, never to be recovered by their loved ones?

The answer is complicated. My own reporting, talking with rural Wisconsin voters who supported Trump in 2016, points to a certain selective attention to the things Trump says and does. Trump is a loudmouth, these voters concede. Ironically, the fact that he spews so much garbage causes them to tune out the things he says that they don’t like, while remaining loyal to the idea that he is somehow representing their interests by sticking it to the establishment. In part, Trump benefits from the fact that his voters don’t take him very seriously.

Then there is our increasingly siloed media, which allows Fox News viewers and consumers of internet conspiracy theories to completely depart from the shared reality reflected by mainstream news.

But most of all, we simply have not solved the problems that led America to elect Donald Trump in the first place. The Trump vote in 2016 was a backlash by white people who feel themselves losing their grip on security and power. Besides an indicator of straight-up racism, and a reaction against the nation’s first African American president, it was a massive vote of no-confidence in the system that has, over the last forty years, given us growing economic inequality, spiraling college debt, a shrinking middle class and a tenuous gig economy that leaves more and more workers desperately insecure. In Wisconsin, Trump specifically campaigned against Democrats he blamed for job loss due to NAFTA and for forgetting about the blue-collar workers and farmers who have been suffering here for many years.

The Democrats did not take on that suffering directly this year. Instead, they acted as though all of the nation’s problems started with Trump. They ran a candidate who represented the old establishment, and who argued for a return to the pre-Trump era.

Compared to where we are now, that looks like a reasonable deal to a lot of people—in fact, to the large, diverse majority of Americans who handed Biden a huge popular-vote victory on Tuesday night.

But it doesn’t get at the root causes. And it didn’t energize the base.

In the city of Milwaukee, the Milwaukee Journal Sentinel’s Craig Gilbert points out, turnout in 2020 was almost exactly the same as in 2016—when Milwaukee voters’ lack of enthusiasm for Hillary Clinton was blamed for electing Trump. 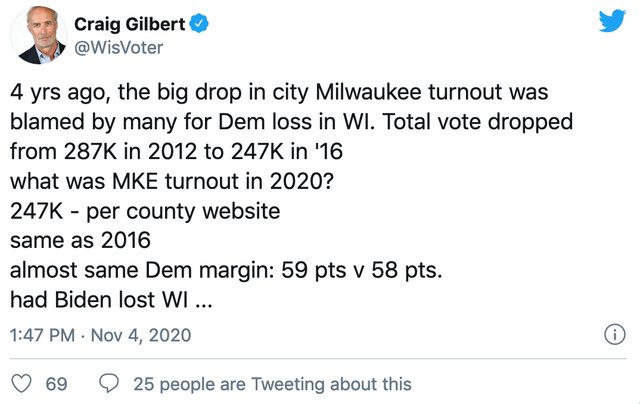 This year, Democrats and progressives made their peace with the Biden nomination. But there were very few ardently pro-Biden voters.

It didn’t help that, instead of focusing all his energy on attacking the most corrupt, destructive president in U.S. history, Biden often seemed to be going out of his way to depress his own base.

There were the gratuitous swipes at Bernie Sanders and his passionate, youthful supporters, the promise to wealthy donors that he wouldn’t get too crazy in tackling income inequality and that “no one’s standard of living will change, nothing will fundamentally change,” in a Biden presidency. He repeatedly reminded voters that he did not favor Medicare for All.

In my Facebook feed I got a targeted ad from the Biden campaign promising that the candidate would not ban fracking. Wrong number.

Disaffected rural voters did not appear to be very moved, either.

The fact is, the public is generally more progressive than Biden on fracking, health care, and taxing the rich. In a prescient column on his new site, the Daily Poster, David Sirota, the investigative reporter who left his job to work for the Bernie Sanders campaign, wrote about his, and our, collective panic attack as Election Day dawned.

No matter what happens, Sirota wrote, progressives will be blamed. If Biden loses, Sirota predicted, Democrats will say he went too far to the left, alienating swing voters. If he wins, “we will be told that he won because he refused to fully embrace a progressive economic agenda.”

“In this mythology,” Sirota continued, “voters were supposedly desperate for a return to the kind of corporatism, incrementalism and neoliberalism that defined the Obama era and that continues to define Beltway Democratic culture amid the economic, public health and climate crises.”

Neither of these takes is true. The fact is, the public is generally more progressive than Biden on fracking, health care, and taxing the rich.

But most everyone in the broad left-to-center coalition fell in line and voted for an uninspiring candidate to get rid of the worst president our nation has ever seen.

And here is where the optimism comes in. Sirota actually sees Biden’s not-a-rock-star candidacy as a good thing, because holding his feet to the fire will not be seen as a sort of personal betrayal of the party’ charismatic leader, as it was in the Clinton and Obama administrations.

And meanwhile, those dull but necessary democratic institutions will have a chance to keep on doing their critical work.

As Meagan Wolfe put it at the end of the Wisconsin Elections Commission press briefing, “I’m like a boring elections textbook, with no pictures.”

“Thank you for being willing to engage on the facts about elections,” she added, “and to bring those facts to voters, because I think a lot of these things, you know, voters may not understand some of these mechanics or the laws behind some of these processes.”

Thank god for those boring, mechanical processes. They, and their custodians, are the only thing standing between us and the power-mad demagogue in the White House. Bring on dull, decent leadership—and democracy.

This article first appeared in the Wisconsin Examiner.