It was bizarre, surreal even, to watch Election Night on the “Public” Broadcasting System. It was like sitting in a family dinner or a church group meeting where too many of the attendees were right-wing and/or militantly nonpolitical to safely discuss anything political in an honest and serious way.

Much if not most of what mattered about the event being covered was off the table of serious discussion. Council of Foreign Relations member and “P”BS “Newshour” host Judy Woodruff and her gaggle of exceedingly polite and respectful “experts” couldn’t mention that Trump had promised in advance to steal the election by declaring victory before all the mail-in ballots required by the pandemic he spread were counted over many days – and then by challenging those ballots in court. The talking heads just yapped along, as if it was a normal election, calling one state after another without the slightest reference to the coup that the Trump administration had pledged to undertake. 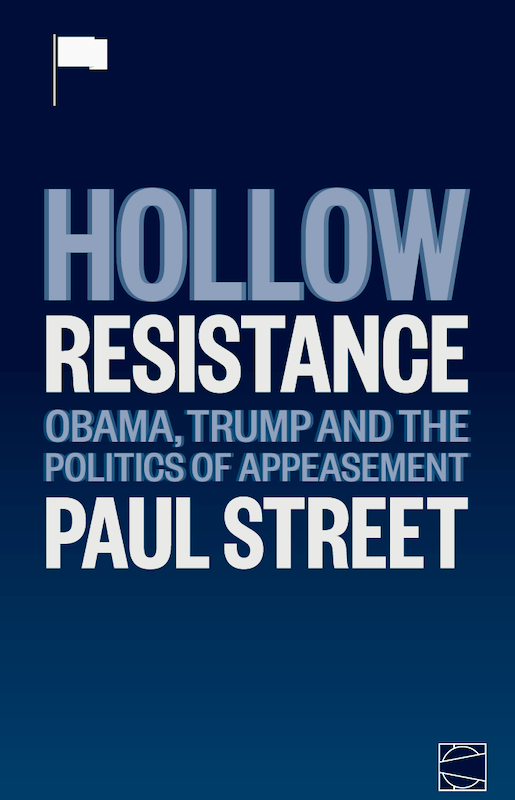 The looming specter of an election being thrown to Trump by a 6-3 right-wing Supreme Court – a very real possibility to which Trump has openly referred with glee – was ignored. It was a non-story.

Sure enough, after Judy trundled off to her nonpartisan bed, the tyrant Trump proclaimed himself the winner and announced his determination to shut down the tally of votes after Election Day — an open declaration of coup intent.

The “P”BS talking heads had nothing to say about the distorting effect of the racist and partisan voter suppression, both legal and extra-legal, underway across the nation. And even as they proclaimed the greatness of our “democratic elections,” “P”BS commentators stayed silent about the open absurdity of the 18th Century Electoral College, under whose right-leaning reign Americans still don’t elect the nation’s president by a popular (one person, one) vote.

If Trump prevails this or next year, it will the third time in this century that a vicious right-wing Republican ascends into the world’s most powerful job after losing the majority vote. That is lethal authoritarian nonsense. It is sickening for the nation’s talking heads to keep on trumpeting this process as “democracy.”

There was no reference to the cringing corporate captivity of the Democrats’ Wall Street candidate Joe Biden, who said he would veto Medicare for All, which is supported by 7 in 10 Americans now. The dismal neoliberal awfulness of the deeply conservative and dollar-drenched Clintonite Dems – the Inauthentic Opposition – is no small part of how and why the fascistic maniac Trump got into the White House and why he’s had a shot at a second term.

There was of course no reference to the sheer racist, sexist, and ecocidal awfulness of the Trump-Barr-Pence-Miller regime, on pace to kill half a million Americans by next February. P”BS talking heads insisted on describing this regime as just another Republican administration and Trump – “the most dangerous criminal in human history” (as Noam Chomsky aptly calls him) – as just another Republican president.

The coup that Trump is trying to carry out with the expected help of his handpicked right-wing Supreme Court – the telegraphed transgression “P”BS couldn’t talk about – is perfectly in line with Trump’s record as a wannabe fascist strongman. It’s what he promised again and again. It’s what we had every reason to expect from an open authoritarian ethno-nationalist.

There was of course no reference on “P”BS to the need for millions of Americans to take to the streets and public squares to make sure that every vote is counted. Media and major party elites don’t like to call for mass action, which might go places masters can’t control.

Consistent with elite fears, I do not mean millions in the streets only to expel the monster Trump or “for Biden.” Not “for” the dismal Democrat — no, for some hint of democracy and then for the freedom to fight for much more. Millions in the streets to cut out the malignant Trump tumor would be a great popular precedent going forward as we take aim at the whole damn political, social, and economic system that gave rise to Trumpism-fascism and its Inauthentic Opposition.

The Day After: Omaha Stake in the Orange Demon’s Heart?

We arose the next day to see that Biden could well win the Electoral College as well as the popular vote. By the end of the day, Biden was just six EC votes short of victory and many of the states still being counted seemed to be leaning his way. There is the tantalizing possibility that Trump could lose the count 270-268, meaning that Trump’s defeat in Omaha, Nebraska – home to an anomalous Electoral College vote broken out from the statewide total – could be his undoing. An Omaha Stake in the heart of the Orange Satan?

…Or Fascism Marches On

But who knows where it’s going to end? True to form and as promised, Trump is trying to use the Justice Department and the courts to thwart the will of 70 million-plus voters who want the fascistic Trump nightmare to end.

This is very much as vowed. Trump and his constitutional Darth Vader Bill Barr are fascists without shame.

Will they really place the outcome of the election before the Supreme Court, daring it to do a Bush v. Gore on steroids, stopping or invalidating the count in numerous states (Bush v. Gore stopped a re-count in one state) to grant a second term to an orange-brushed maniac most of the nation and world views with fear and loathing? And will that court really do Trump’s bidding, in abject defiance of the popular will?

Maybe. Why not? The high court is jammed with right-wing freaks, three of whom served on the Bush legal team in Bush v. Gore! It’s not for nothing that the Party of Trump jammed the Christian fascist Handmaid cultist Amy Coney Barrett on to the high court in near-record time.

A sick part of me hopes they do try to go through with their coup as I think it could make this nation un-governable. I have been arguing for an ungovernable America with many millions in the streets for most of my teen and adult life. Radicals like me like the masses in action, going into new and more radical places than from where they started often enough.

Some “liberal” activists called off Thursday election count demonstrations, claiming that “no red lines are being crossed” in the vote tabulation process.

How Obama of them. (The fascism-appeaser Obama is looking forward to Thanksgiving dinners where “we don’t have to argue about politics anymore.”)

The Right and Ruling Class Ready to Dump Trump for Good?

One thesis is that the nation’s vicious right wing is sufficiently pleased with the possible outcome of a Biden White House and a persistently Republican Senate combined with a now far-right Supreme Court. They got the federal court appointments and the assault on the “administrative state” they wanted. What more do they need from the corrupt asshole Trump, who most of them dislike?

The ruling class could be happy enough with that arrangement too. Not wanting an ungovernable and hence unprofitable nation, smart ruling class operatives can certainly see the logic of cutting and running from Trump for good now. The masters of capital got a bunch of deregulation and tax cuts along with huge military budgets and a populace ready for “relief” in the form of a corporate-neoliberal president like Biden from Trump. Now the owners of the country can usher the lunatic Trump out the door, perhaps.

Indeed, investors are pushing the stock market up in anticipation of the ascendancy of a calming and boring center-right corporate president (Biden) who will be prevented by the Senate and judiciary from acting to any significant degree on progressive pressure from the left and the bottom up. Biden is a “reach across the aisle” conservative Democrat in the Clinton-Obama accommodation and appeasement mode. If he becomes president, he will be perfectly happy to be “hamstrung” by a right-wing Senate and Supreme Court. That will give him good cover he needs to be the center-right corporatist and imperialist he is, telling the populace and progressives that he can’t act on their demands for urgently needed policies like Single Payer health insurance, seriously progressive taxation, a peace dividend, free public college, a Green New Deal, and the full re-legalization of union organizing.

“The Real Issue to be Faced”

Never forget what Biden reassured Wall Street investors during a 2019 fundraiser in Manhattan: “nothing will fundamentally change” if he becomes president. That’s right: “nothing will fundamentally change.” The super-opulent rich will continue to get more grotesquely rich in a nation where the top tenth of the upper One Percent already had more net worth than the bottom U.S. 90 percent under Obama. It’s worse now.

Candidate Biden suggested that he would as president veto Medicare for All, currently supported by 7 in 10 Americans.

Even if Biden gets past the remaining hurdles (not guaranteed), the fact remains that roughly 70 million U.S. citizens, very disproportionately white, vomited up a vote for a man that Noam Chomsky has accurately called “the most dangerous criminal in human history” – a demented sociopath dedicated to significantly accelerating the capitalist and imperialist destruction of life on Earth. This toxic mass of lethal Amerikaners will not simply disappear merely because their Great Orange God is escorted out of the White House kicking and screaming.

Trump and Pence and Barr and Miller must by all means be removed from power immediately (January 20th is far too late for my taste) and we should take to the streets in the millions to make sure this happens. A second Trump term would be a fascistic nightmare that would make the first Trump administration look mild by comparison.

At the same time, the last thing we need is a “return to normalcy.” Late-capitalist “normalcy” is how we got to this mess in the first place. As this year’s extreme weather and epic wildfires should remind us, “the real issue to be faced,” to quote Dr. Martin Luther King near the end of his life, is “the radical reconstruction of society itself.”