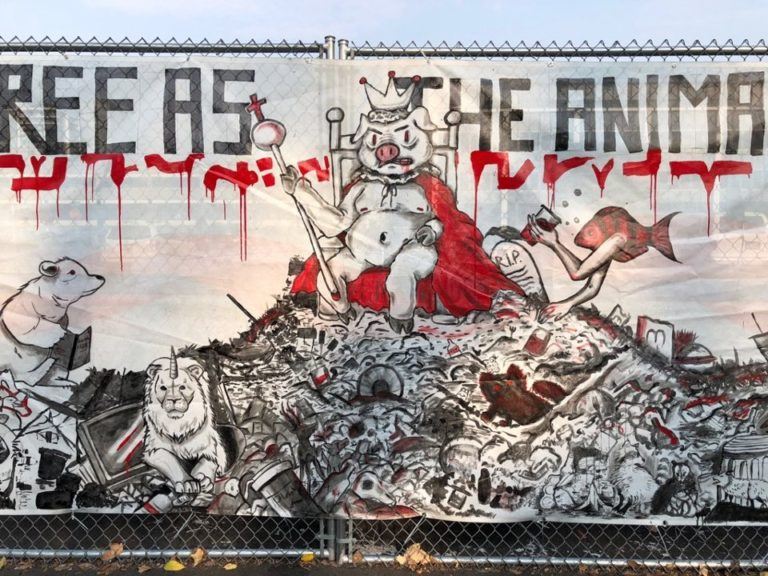 Regardless of which grey representatives of the oligarchs win the 2020 election, it is essential to remember the optimism that preceded the Democratic primaries— that informed and rational programs to restore the environment, employ millions of people at a living wage, and enact a single payer health care system, are possible. Following rigged primaries, the best that optimists could offer was slowing the rate of environmental decline as social needs remain unmet. Joe Biden’s offer of nothing of substance— ever, assures that declining economic circumstances will keep the great unwashed on the defensive, and away from challenges to the oligarchs.

Missing from the electoral mix for a reason was politics, the act of putting together a political program and selling it to prospective voters. For the second election in a row, the Democrats assumed that running as not-Donald Trump would be a winning strategy. Possibly it was. But should Joe Biden prevail, the oceans of circumstance beyond being not-Trump will require a political program. While Mr. Biden could in theory co-opt Bernie Sanders’ program, he was appointed by the Democratic leadership to bury it. That doing so doesn’t appear to have bought him much in electoral terms is the setup for the eternal refrain that being to the right of Ronald Reagan is too far left for the Democrats.

The divide that led to the 2016 outcome, and that has persisted since, was brought about when the oligarchs and their agents in the PMC had their economic lots restored by the Obama administration while the bottom 70% didn’t. This class divide has been framed variously as rural versus suburban and urban, and through identity politics. What Democrats did was blame the people whose jobs were lost in the Great Recession, or in the decade of planned de-industrialization that preceded it, while praising the beneficiaries of Mr. Obama’s bailouts as if they had bailed themselves out. The bailed out then had the gall to call the not-bailed-out racists and fascists for not voting for more of the same. 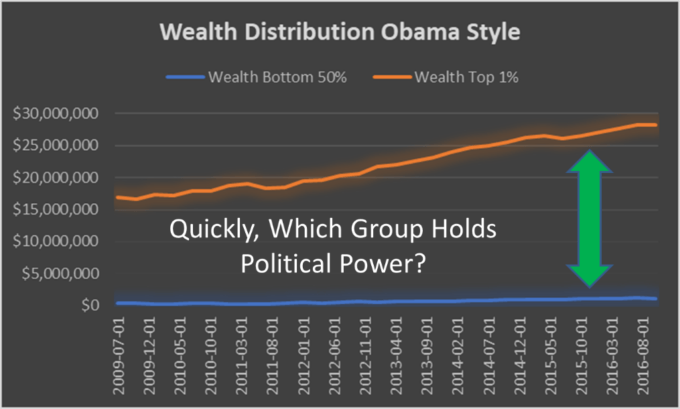 Graph: Barack Obama’s economic policies were explained (by him) as necessary responses to a crisis. The evidence, in terms of who benefitted and who didn’t, can be seen above. In the midst of crisis, the already rich got progressively richer while the bottom half of the wealth distribution didn’t. A progressive wealth tax could have recouped Mr. Obama’s maldistribution if he had objected to it. But he didn’t. Mr. Obama made the rich richer, and left everyone else to rot. Source: St. Louis Federal Reserve.

With two capitalist parties competing for the favor of the oligarchs and corporate executives, the only guaranteed losers of this election are the American people— and those affected by American political and economic policies abroad. The Great Realignment that is taking place began when suburban Republicans turned against George W. Bush’s disastrous war in Iraq. They began voting for Democrats as the refugees from Barack Obama’s neoliberal economic policies voted Republican. The irony that either party would be considered a refuge from American militarism or oligarchic rule finds expression in ‘lesser evil’ voting. With Biden despised as passionately as Trump, it seems that ‘lesser evil’ determinations depend on the premises that underly them.

Following the 2016 election, leading Democrats made unproved and disproved allegations regarding election interference by a foreign, nuclear-armed, power that were ratcheted up to the point where American liberals were ready to launch a nuclear war as retaliation for $75,000 of internet troll ads that were mostly run after the election. They joined with the foreign policy hawks (neocons) who had conceived and supported George W. Bush’s disastrous war against Iraq, along with ‘intelligence community’ hacks who had knowingly lied to Congress regarding illegal spying on the American people as well as illegal torture, to claim that any threat to their power is ‘treason.’

While the divine order is apparent to Democrats, from the not-Democrat Left, the choice of lesser-evil isn’t so apparent. Mr. Biden started his political career opposing school busing to make sure that rich, White children received better funded educations than poor, Black children. From there, he launched xenophobic rants while building out the largest carceral system in world history. After destroying the lives of few million Black and Brown people with the 1994 Crime Bill, Mr. Biden went on to ‘write,’ meaning sponsor the writing of, the Patriot Act. And from there, he provided ‘bi-partisan’ cover for the Iraq War in which a million Brown people were pointlessly and gratuitously killed, and an entire region of the world was set on fire.

Conveniently for present purposes, Naked Capitalism posted a piece by political scientist Thomas Ferguson on the determinants of political decision making— that is, on the ‘product’ that elected representatives produce. The punchline: ‘money,’ as defined by the interests of corporate executives and oligarchs, is the overwhelming determinant of ‘political’ outcomes. Advancing the public will— the liberal explanation; or the public interest, the explanation offered for representative democracy, have no bearing. The longstanding practice of fitting political outcomes into these theoretical frames to ‘explain’ public policies is scientific malpractice given Mr. Ferguson’s findings.

While there is little chance that the evidence from Mr. Ferguson’s long career of retrieving and presenting it will sway views on the matter, it fundamentally redefines almost every aspect of how Western political economy is conceived and perceived. The functional model, as opposed to the received wisdom of popular discourse, is of governance by and for oligarchs. The wealthy and corporate executives, occasionally known as capitalists and their agents, run the U.S. They don’t partially run it. They don’t occasionally weigh in on matters of relevance to them. They tell elected representatives what to do and elected representatives do what they are told on policy matters.

Details add complexity to this picture. Public-private partnerships, privatization, the outsourcing of government functions to private corporations, and cost-plus contracts aren’t a precise call-and-response from oligarchs and corporate executives to elected representatives. However, the broad truth that the public interest has no bearing on policy outcomes, whereas the particular interests of oligarchs and corporate executives give them motive, form and structure, corresponds closely with the facts that Mr. Ferguson, et al, found. And while this finding is wholly inexplicable within the liberal frame, it corresponds closely to the Marxist / Leninist model of nations being the political arms of capitalist endeavors.

To be clear, one need not adhere to Marxism / Leninism to conclude that the facts that Mr. Ferguson presents fit the Marxist / Leninist theory of the state, and absolutely contradict the central tenets of liberal theories of it. Even the less incendiary claim that the interests of capital motivate public policies places Democrats and Republicans together on the side of capital. The pre-neoliberal conception of ‘Left’ politics had it in opposition to the interests of, and rule by, capital. The subsequent neoliberal Left of ‘benevolent oligarchs’ and ‘right-thinking bourgeois’ is, descriptively, the ideology of the Republican right. It is closer to fascism, the alliance of capital with political power to promote business interests, than it is to Socialism.

A host of results follow. Ideology, as it is popularly conceived, is represented by the spectrum view from Left to Right, with a political ‘Center.’ This is the model used by the ‘Left’ to conclude that Democrats are closer to Left than Republicans. In contrast, a class view places both Democrats and Republicans as functionaries for the ruling class. The long history of Democrats screwing labor less publicly than Republicans led to the ‘screwing labor = support’ relationship of Democrats to labor. Not to cause heart palpitations, but the Great Realignment, with Democrats openly representing the interests of oligarchs and the PMC, makes it the anti-Left party.

The counter, that this may be true, but that Donald Trump or [name of Republican here] are worse, may fit into some political calculus, but it is irrelevant for purposes of defining the relationships in play. According to the data— and it is astonishing how intellectually impoverished most political ‘science’ is relative to Thomas Ferguson’s work, Democrats and Republicans take their orders from capital, and they work in the interests of oligarchs and corporate executives, with large degrees of specificity. That these results fit the Marxist / Leninist theory of the state goes beyond mere correlation. The theory preceded neoliberalism. And the descriptive validity of the relationship has increased as neoliberal reforms have progressed.

The implausible ‘accidental’ correlation of liberal policies with outcomes beneficial to the rich— the bi-partisan deregulatory regimes of neoliberalism, the instantiation of neoliberal institutions into every corner of modern life, the trade agreements that screwed labor while building out monopoly privileges for the owners of capital, and the bailouts of banks and corporations whose owners and executives killed their own businesses through predatory practices, all led to an upward trajectory of wealth and power for oligarchs and corporate executives, and five decades of declining circumstances for working people. The current division into ‘Left’ and ‘Right’ oligarchs eschews the class view in favor of the liberal view where ideology governs. This, while the oligarchs have demonstrated no such confusion as their bank accounts have swelled.

The absolute hatred that has grown between the rich and PMC and, let’s call it the working class, was conceived, fertilized and watered by political leaders. Republicans stirred the pots of racism and xenophobia, while Democrats stirred nationalist and military tensions through Russiagate. The overlap between these manufactured social tensions and class differences was given renewed definition through engineered economic outcomes (NAFTA, de-industrialization, China joining the WTO, etc.). These provide a material basis for current political divisions. Much as support for capital places Democrats on the side of capital, Republican posturing as a friend to workers is wholly implausible except through the liberal frame, in which it is as plausible as the Democrat’s. 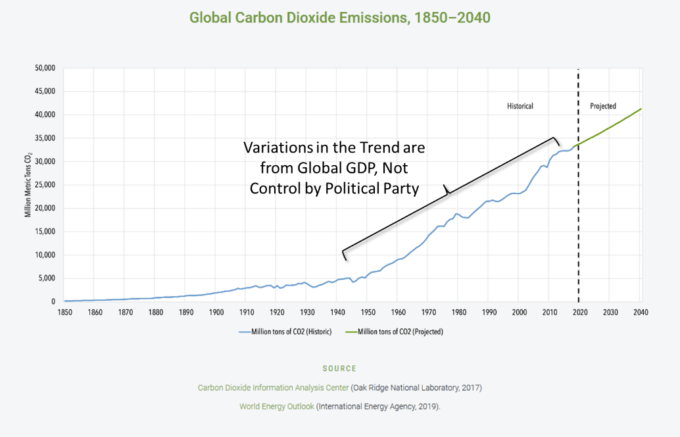 Graph: the tendency to pose the climate crisis, mass extinction, and dead and dying oceans in terms of party politics is misdirection. The level of economic production is the main determinant of CO2 emissions. Donald Trump is most certainly an environmental terrorist, but so is Joe Biden. The ‘stylistic’ difference is that Donald Trump will tell you what he is doing, while the Democrats say one thing and do another. Barack Obama took credit for reducing carbon emissions as he sold ‘excess’ coal to China. Mr. Obama bragged that the was an environmental terrorist at the Baker Institute. Source: c2es.org.

It’s apparently easy for Democrats to see the implausibility and hypocrisy of Republican appeals to working people. What they can’t see is the implausibility and hypocrisy of their own appeals. Joe Biden acted as a front-man for corporate interests— MBNA and the credit card industry more broadly, and Wall Street, when he designed policies to screw working people for the benefit of his corporate sponsors. You don’t need moral arguments to understand the class politics. The evidence of bi-partisan service to the oligarchs doesn’t distinguish Democrats from Republicans. Remove the labels and there is no discernable difference, except through which industries and oligarchs are being serviced by which politicians at any given point in time.

The challenge for Left politics, if not for the American Left in its neoliberal phase, it to get past party politics. The brave souls in the streets for the last six months are the only hope for political redemption. It’s our world, irrespective of the implied and explicit claims of the oligarchs. Last I heard, people were begging Joe Biden for medical care. Good luck with that program. The time for large changes that happen fast is coming up. It’s called a crisis. The Right and the oligarchs are positioned for it. Last go around, the Left was begging Barack Obama not to cut Social Security when direct action to force a broad political program in a Leftward direction was needed. The crisis is here. Mass evictions and foreclosures start in eight weeks.