U.S. President Donald Trump departs after speaking during an event at the Eisenhower Executive Office Building in Washington, D.C., on Dec. 19, 2019.

We now know that Joe Biden will be the next president of the United States — unless something truly strange happens. It seems important to include that caveat, given how the past few years have gone. So let’s remember that Biden could die from an addiction to carrot juice. He could take a walk in the Arizona desert, shoot at a 60-foot-tall saguaro cactus with his gun, and then have the damaged cactus topple over onto him. He could be crushed by a chunk of “blue ice” plummeting out of the sky as he takes the oath of office on the Capitol steps.

But no matter what, the Trump era is now over, or at worst, on hiatus. As we take a look back at the past four years, there’s one thing we can say for certain: All of America faced a great historical test, and almost all of America failed completely.

Donald Trump made people ask this question for the first time in history: Is there such a thing as a lazy fascist?

Before Trump, it seemed obvious that fascists were filled with vigor, always available for a mass torch-lit rally at midnight. Trump clearly has the instincts of a fascist: a lust for power, cruelty toward out groups, and romanticization of a past that never existed. But he also can’t execute any plan that requires more than five seconds of effort. Are you a fascist if you vaguely want to be supreme leader, but that seems like a ton of work, and your top priority is getting through all the hours of “Fox & Friends” on your DVR?

In fact, Trump’s basic life incompetence is so extreme that it’s amazing he’s only gone bankrupt six times. As president, he couldn’t do the most simple things in his immediate self-interest.

For instance, the U.S. government did have detailed plans and a great deal of expertise to deal with the eruption of something like the novel coronavirus. All Trump had to do was appoint a Colin Powell-like figure to supervise everything, and then get out of the way. This would almost certainly have led to his reelection. But he could not manage this, because he is just a tiny bit of protoplasm attached to an ego the size of the universe. It was more important for him to be on camera every day, musing about how impressed America’s top scientists were by his intuitive grasp of microbiology.

Trump also couldn’t get it together to push through another economic rescue package. It was desperately needed, Democrats wanted one, Republicans could have been browbeaten into voting for it, and there are few things more popular in an election year than giving people money. Instead Trump spent his dwindling time in office tweeting about Bill Maher, Beautiful Maine Lobsters, and Patio Pizza in St. James, Long Island.

It’s true the Trump administration has managed to implement policies that blighted the lives of many, many people. But this has been on issues where Trump himself just had to sign papers put in front of him by the small number of his underlings who are minimally competent.

All that said, there is one area where Trump did not fail. Everyone has a mental map of the world inside their head. Mentally healthy people adjust their interior map when they see it doesn’t match reality. Mentally unhealthy people try to force reality to change to match what’s inside them. Trump, who is pullulating with hate and fear, has successfully devoted himself to multiplying the amount of hate and fear in the world outside of his head.

The most terrifying part of the Trump presidency has not been Trump himself, but the slavish support other GOP politicians have given his every action. We now know for sure that there’s nothing a Republican president can do that’s so grotesque that the rest of the party won’t fall in line behind it.

The most striking example of this has largely been forgotten: During the beginning of his term, Trump could have easily, by accident or design, started a nuclear war with North Korea. Experts at the time believed the odds of war with North Korea were between 20 and 50 percent, and Trump himself later told Bob Woodward that war had been “much closer than anyone would know.”

Donald Trump made people ask this question for the first time in history: Is there such a thing as a lazy fascist?

Previously the U.S. planned only to respond to aggression by North Korea against South Korea or Japan. As reported in the book “The Bomb” by Fred Kaplan, Trump demanded that the Pentagon produce a first-strike war plan that could be used simply if the U.S. felt North Korea’s actions were threatening. It did not begin with the use of nuclear weapons by the U.S., but could plausibly have escalated to that point.

Trump’s insanely threatening rhetoric about “fire and fury like the world has never seen” also heightened the possibility that North Korea would believe that it would have to strike first to preempt an attack from the U.S. The situation would have been especially perilous if U.S. officials had followed Trump’s order in early 2018 to evacuate the families of American military personnel from South Korea. Fortunately, then-Defense Secretary James Mattis was able to argue Trump out of it.

Yet none of this fazed the Republican Party. GOP Sen. Jim Risch of Idaho casually mentioned at an event in Germany that Trump was willing to start “one of the one of the worst catastrophic events in the history of our civilization. … The end of it is going to see mass casualties the likes of which the planet has never seen.” Did this make Republicans want to take this option out of Trump’s hands, and return the power to make war to Congress, as the Constitution dictates? Nope.

So given that the GOP was happy to let Donald Trump end human civilization, we can understand why everything else Trump did was fine too. 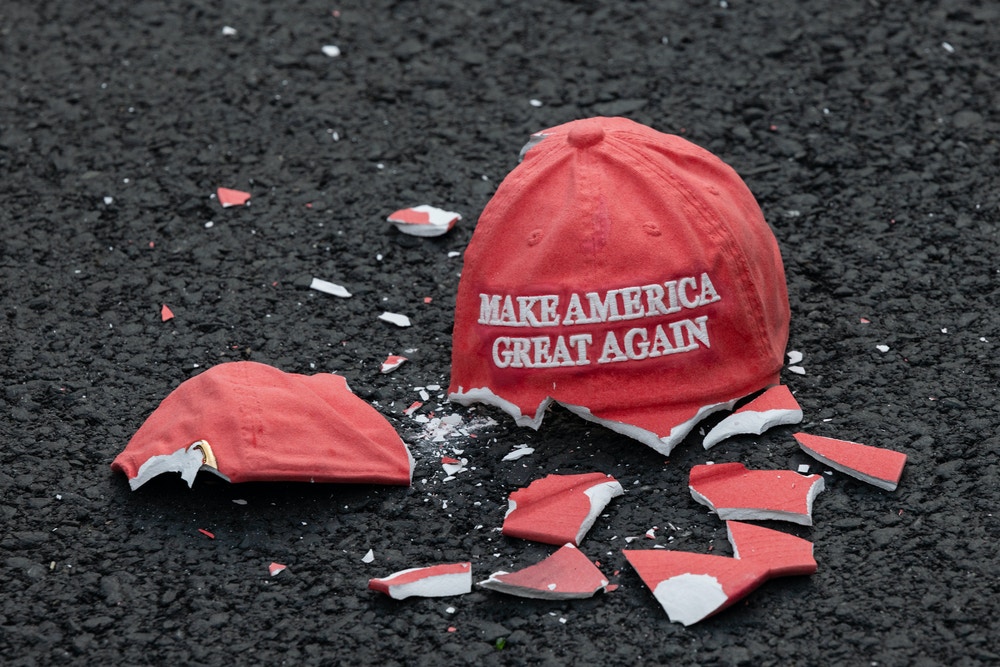 The most appropriate slogan for Biden’s campaign in the spring and summer would have been “Biden 2020: He’s Around Here Somewhere.”

The 2020 campaign environment was similar to that of 12 years ago. In the lead up to the 2008 election, Wall Street imploded in a morass of confusing acronyms. With George W. Bush checked out and John McCain obviously in over his head, Barack Obama was able to become president in the mind of Americans before anyone voted, simply by acting like an adult who understood what was going on.

Similarly, with Trump totally abdicating any leadership on the coronavirus, Biden could easily have stepped into the vacuum. People wanted basic information, updates, and reassurance that there were authorities somewhere who knew what they were doing. But instead of providing a calm, forceful contrast with Trump, Biden seemed to putter around not doing much of anything.

This was one place where Biden could have done the right thing without violating his centrist instincts, or making high-dollar donors anxious. But he didn’t even give it a shot.

Can you believe that Joe Biden lost Florida, even as voters overwhelmingly passed a ballot measure to raise the state minimum wage to $15? You should, since John Kerry lost Florida in 2004 by a larger margin than Biden did, even as a similar increase to the minimum wage won 71 to 29 percent.

Democrats could not make this basic, incredibly popular policy part of their brand, even when faced with Trump.

A decade of work by activists forced Biden to make a $15 federal minimum wage part of his platform. But many voters, in Florida and elsewhere, did not know that. Many others did know it but did not believe Democrats would genuinely fight for it. The Democrats could not make this basic, incredibly popular policy part of their brand, even when faced with Trump, whose core conviction is that American billionaires aren’t rich enough.

The reason for this is straightforward: The Democrats do not, for the most part, represent the bottom 90 percent of Americans. Instead, the Republican and Democratic parties are run by and for different sections of U.S. elites. Democrats therefore can’t clearly and powerfully advocate for policies that would harm their elites. This incentivizes them to wander into bizarre cul-de-sacs like Russiagate, where the ratio of effort expended to significance approached infinity.

The corporate media does not exist to tell people the truth any more than chainsaws exist to brush your teeth. You may be able to clean your teeth with a chainsaw, but only if you’re extremely careful. If you just jam it in your mouth every morning, you’re going to be disappointed.

The same level of care is necessary to get much out of the corporate media. Its goal is to make as much profit as possible, and telling the truth is generally not just not profitable, but actively anti-profit.

The regular corporate press experienced Trump’s election as a tremendous shock to its system. It turned out many, many people loathed the media — for some legitimate reasons as well as many illegitimate ones. The corporate press could have used the occasion as an opportunity to rethink everything about how it functions. The late journalist William Greider once imagined a transformed media with “editors with different kinds of skills (perhaps more like a political organizer’s or a priest’s) and reporters who were equipped to do a different kind of news — stories that began respectfully with what people needed to understand to focus as citizens, not with the governing agenda of the higher authorities.”

But the profit motive means this will never happen. Instead, the corporate press saw Trump in the White House and decided to do exactly what it did before — i.e., try to make as much profit as possible — just now with extra sanctimony.

Not everything about the past four years has been bleak. The immediate resistance to Trump in the streets — seemingly spontaneous but actually built on long-term political organizing outside the two parties — helped block even more egregious actions by his administration. The resurgence of #BlackLivesMatter made it, as Noam Chomsky has called it, “the biggest social movement in American history with support beyond anything that’s ever been registered in the past.”

Meanwhile, Reps. Alexandria Ocasio-Cortez, Ilhan Omar, Rashida Tlaib, and others have demonstrated that there are far more chinks in the armor of formal politics than the people inside want you to believe. In fact, the squad & co. have accomplished so much with such meager resources that it suggests the system is incredibly decrepit and rotten — so much so that a good hard shove might cause much of it to collapse.

But while the possibilities in front of us are real, we should not deceive ourselves about what we learned about this country during our nightmarish Time of Trump. There are no benevolent adults in charge. Anything at all can happen. The time to start fighting to prevent a future, even more terrifying Trump is now.