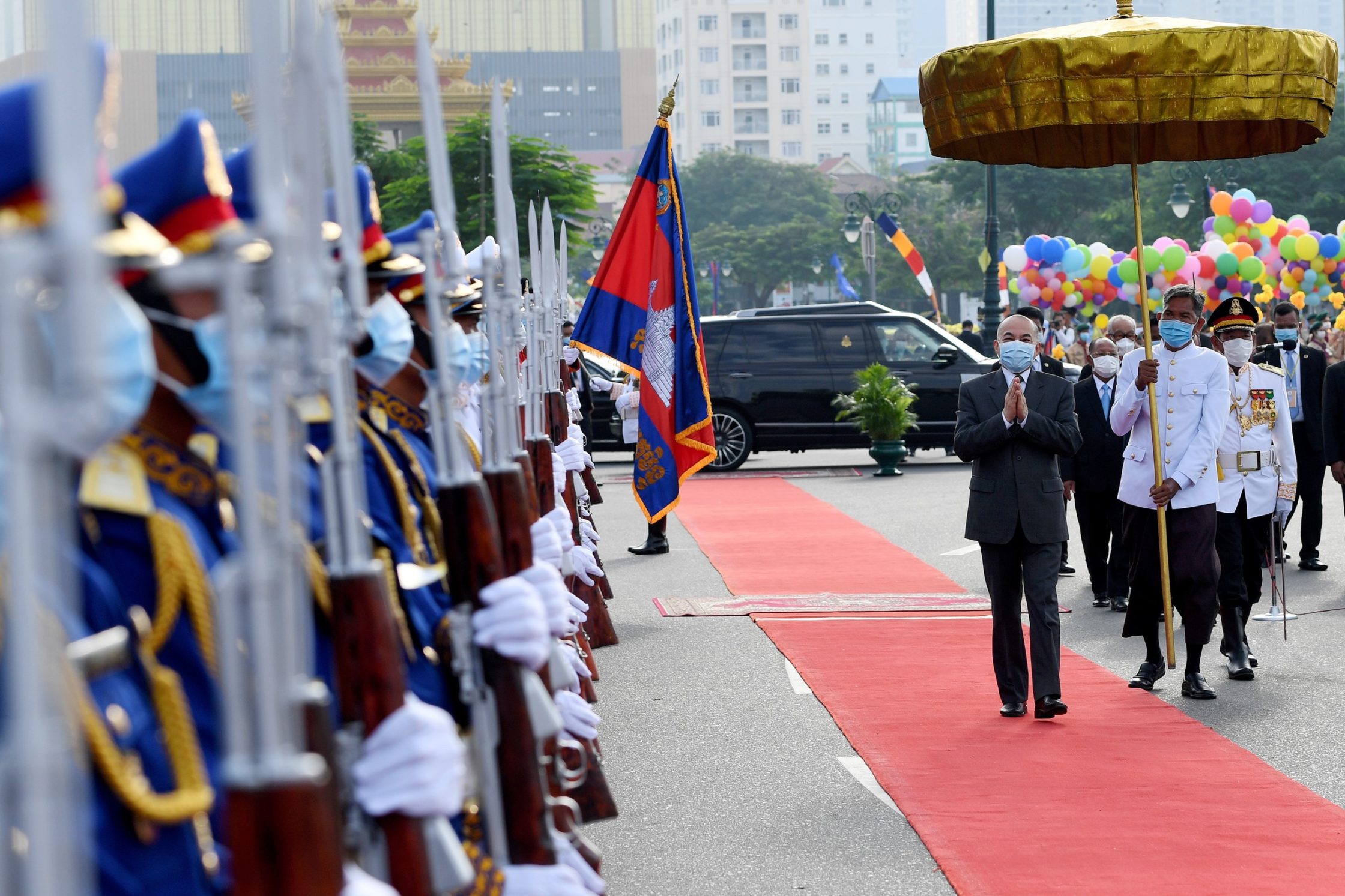 In a message posted to his Facebook page, the head of the Cambodia National Rescue Party (CNRP), who is facing charges of treason for an alleged plot to topple the government with U.S. assistance, called for solidarity to ensure that the country’s independence remains strong.

“Division makes the nation weak and could lead to the loss of its independence—a divisive and broken nation will pave the way for external exploitation, foreign control, destruction, and disgrace,” he wrote.

To achieve national unity, he said, the people must forgo greed and retribution, and work to heal the country.

While Kem Sokha is out on bail awaiting his trial, his political activities are restricted, and he has largely involved himself in humanitarian work. But the opposition chief, who was arrested in September 2017 and whose party was dissolved by the Supreme Court two months later for its alleged involvement in his coup, said that even such activities are viewed with suspicion by the ruling Cambodian People’s Party (CPP).

“Even humanitarian activities such as fighting the coronavirus and [providing aid] to help victims of flooding is still seen as ‘doing wrong,’” he said.

The ban of the CNRP marked the beginning of a wider crackdown by Hun Sen on the political opposition, NGOs, and the independent media that paved the way for the CPP to win all 125 seats in parliament in the country’s July 2018 general election.

With Cambodia isolated from Western trade partners in the wake of the crackdown, Beijing has offered its full support for Hun Sen’s government. In turn, Cambodia has increasingly backed Chinese positions on international issues, including in disputes in the South China Sea.

Chinese investment has flowed into Cambodian real estate, agriculture and entertainment, but Cambodians regularly chafe at what they say are unscrupulous business practices and coarse behavior by Chinese residents, and worry that their country is increasingly bending to Beijing’s will.

CPP spokesperson Sok Eysan acknowledged to RFA’s Khmer Service that national unity is a key for the protection of national independence and sovereignty, but said Cambodia’s government has no need for dialogue with “outlaws and rebels,” referring to the CNRP.

“We have national unity and solidarity among the 16 million people [of our country], who live under the roof of peace—there is no division,” he said.

“The government will not reconcile and cooperate with rebels and outlawed political organizations,” he added.

Yong Kim Eng, president of the local People’s Center for Development and Peace NGO, called national unity and solidarity the “backbone of national independence” and the best way to guarantee lasting peace.

“Different opinions are normal in a democracy,” he said. “National unity is very important for making our country progress forward with grace in the international arena.”

Many government officials, students, and other members of the public gathered at Phnom Penh’s Independence Monument on Monday morning to celebrate the anniversary of independence from France in 1953—90 years after French colonization began.

King Norodom Sihamoni took part in the ceremony but did not speak, while Hun Sen was absent as he quarantined at home after coming in contact with persons infected with COVID-19, the disease caused by the coronavirus.

Also on Monday, exiled CNRP leaders said in a statement that CNRP deputy president Mu Sochua will lead them in submitting a petition to the Cambodian embassy in Washington on Nov. 10, demanding that Cambodia’s Interior Ministry revalidate their passports.

The passports of 12 CNRP senior officials and 27 CNRP activists taking refuge abroad were invalidated by the Ministry of Foreign Affairs and International Cooperation in a November 2019 memorandum sent out to various foreign diplomatic missions in Cambodia, citing charges for alleged crimes by the Phnom Penh Municipal Court. The CNRP officials say the charges are spurious and politically motivated.

Ly Rattanak Reaksmey, the head of the CNRP’s working group in Thailand, who also had his passport invalidated, told RFA he has faced difficulties traveling within his country of refuge.

He said Hun Sen should refrain from using a political dispute as a pretext to revoke passports and urged the government to revalidate them so that CNRP leaders could return to the country to defend themselves in upcoming legal proceedings.

“When our passports got revoked, we couldn’t travel anywhere,” Ly Rattanak Reaksmey said.

“We face insurmountable difficulties. When I got to the airport and had my passport scanned, I was told that it is invalid and thus I could not travel.”

Previously, Hun Sen has said he would welcome the return of senior CNRP leaders via any point of entry to Cambodia and the decision by the Ministry of Foreign Affairs to revoke the passports of the dozen officials appeared to contradict his claim.

CPP spokesman Sok Ey San told RFA he called the CNRP leaders whose passports were revoked and told them the Cambodian embassy in Washington will not accept their petition.

He said the CNRP is “routinely involved in illegal acts” against the government and will not be recognized.

“The Cambodian embassy in the U.S. belongs to the royal government, and thus we don’t recognize any outlaw rebels,” he said. 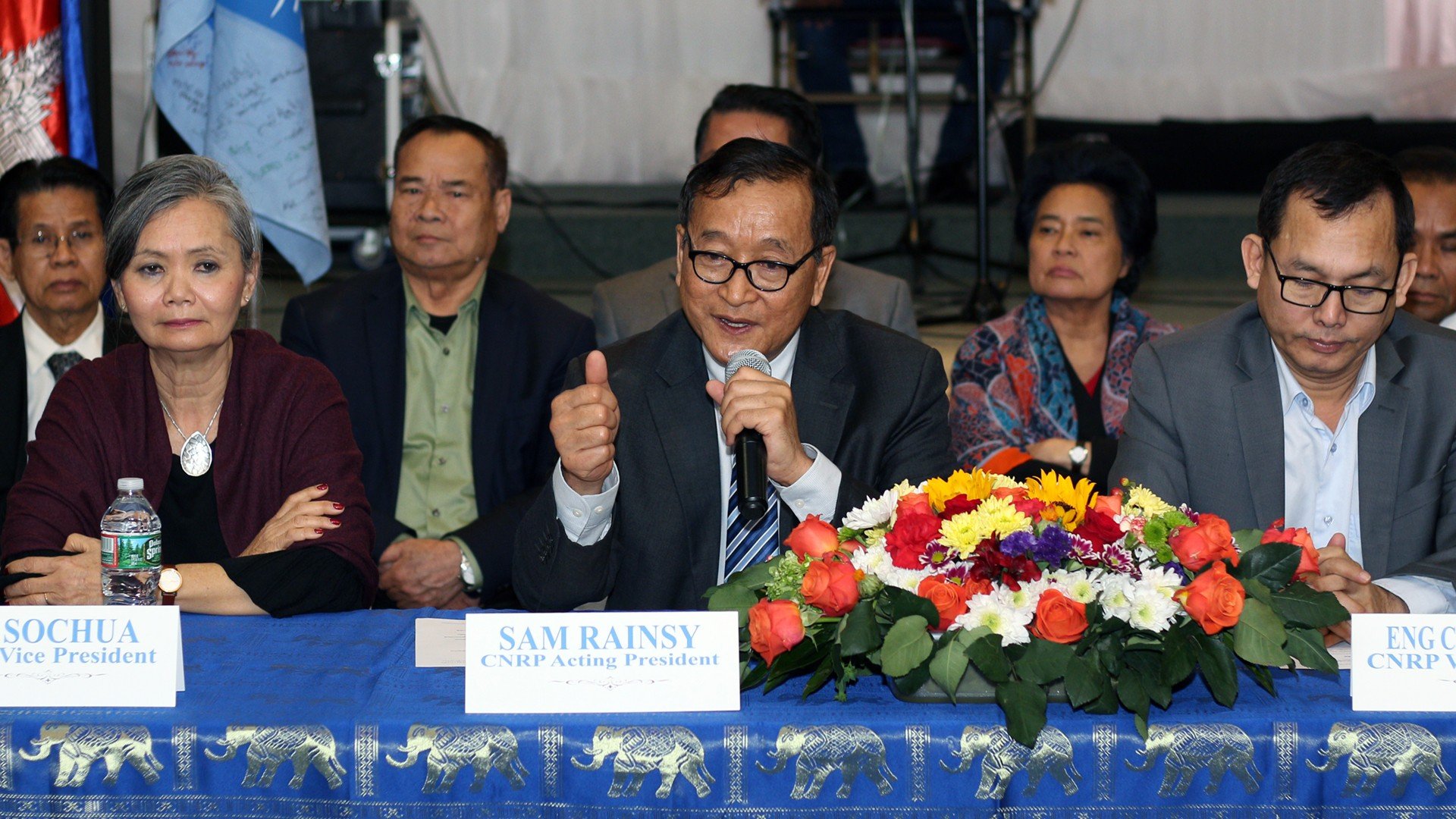 Am Sam Ath, senior investigator with local rights group Licadho, told RFA that preventing the opposition leaders from returning home to defend themselves in court is “illegal” because it will deprive them of the right to a fair trial.

“[The officials] should be given the opportunity to return to Cambodia to face legal proceedings and a fair trial,” he said.

The Phnom Penh Municipal Court is scheduled to hear cases against nine CNRP leaders, including Sam Rainsy, on Nov. 11 on charges of “attack” so as to the topple the government—punishable by between 15 and 30 years in prison.

On Nov. 26, the court is also scheduled to hear the cases of 59 CNRP leaders and activists on “plotting” and “incitement to commit a felony” in connection with Sam Rainsy’s planned repatriation in 2019—punishable by between five and 10 years in prison.

Sam Rainsy has lived in self-imposed exile in France since late 2015, citing a raft of what he says are politically motivated charges and convictions. He had tried to return on Nov. 9, 2019 to lead nonviolent protests against Hun Sen, urging Cambodian migrant workers abroad and members of the military to join him, but his plan to enter Cambodia from Thailand was thwarted when he was refused permission to board a Thai Airways plane in Paris.

CNRP officials have pledged to promptly return to Cambodia to face trial once the government lifts its ban on airlines from carrying them, nullifies the revocation of their passports, and sends out letters to Association of Southeast Asian Nations (ASEAN) member states—in particular Thailand—allowing for them to freely travel within the countries.