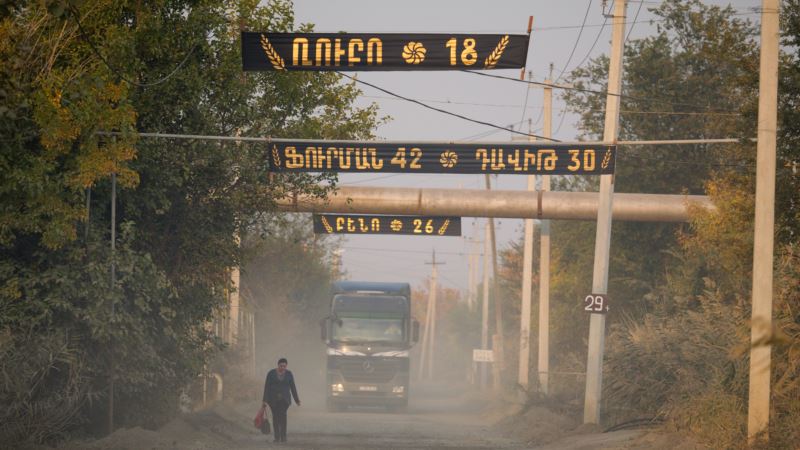 As a controversial cease-fire agreement is reached in Nagorno-Karabakh, the deaths of Armenian fighters are marked with black banners on the streets where the fallen lived.

A black banner in Echmiadzin, a town near Yerevan, with the name Karen, and an age: 19

This banner is one of hundreds throughout Armenia marking the names and ages of soldiers and volunteers who were killed in the conflict between Armenia and Azerbaijan that started in late September. According to neighbors, Karen was killed in a drone strike in mid-October.

All photos in this gallery were taken in and around the Armenian capital, Yerevan.

The custom of hanging a black banner on the street where a fallen soldier lived dates back to at least the first conflict over Nagorno-Karabakh, which ended in 1994.

One Armenian woman who lived through the first Nagorno-Karabakh war wrote on Facebook: “I was quite small when the N.K. war started, nearly the same age as my older son. Whenever I thought of it, it always seemed that I don’t have very many memories somehow. But with this war, day by day, memories are coming back.

“I always associated the war with the cold and winter. Days, months, and years without electricity, in cold apartments and houses. How everyone hollered when suddenly the electricity was turned on for only two hours a day….

“The current situation is, of course, different. One thing has not changed, though: the sight of big, black strips of canvas hanging on the streets with a name and age. I saw so many of those as a child, but I’m not sure I fully comprehended what it meant — shattered dreams, devastated families, pain that will never ever go away. As a friend wrote recently: Those boys should have been falling in love, not falling in war.”

More than 1,200 Armenian fighters and some 45 civilians have died in the conflict, officials say. Azerbaijani authorities do not release military losses but say nearly 100 of their civilians have been killed.

A truce signed by Armenian, Azerbaijani, and Russian leaders on November 9 has brought hope that the number of fatalities — and black banners — will stop rising.