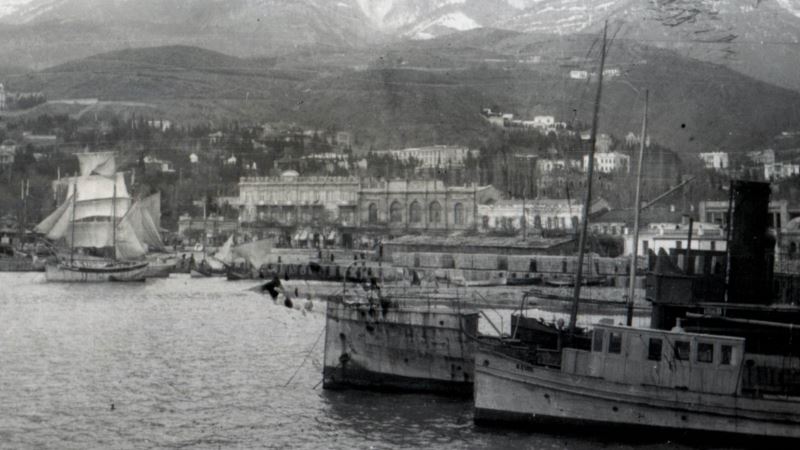 One hundred years ago, the Bolsheviks drove the last White Russian forces opposing them in Europe out of their final stronghold on the continent, Crimea.

Soldiers, officers, and thousands of civilian emigres who feared for their lives or did not want to live under communist rule left by sea. Some 2 million people left Russia in the postrevolutionary wave of emigration.

Red Army troops parade on Red Square in Moscow, sometime between 1918 and 1920.

“The White Army and the Black Baron

Are preparing to restore to us the tsar’s throne,”

“But from the taiga to the British seas,

The Red Army is the strongest of all!”

The fledgling Red Army didn’t make it to the British seas. Its furthest advance in that direction was stopped at the gates of Warsaw in August 1920. It did, however, drive the “Black Baron” — Piotr Wrangel — into the Black Sea, ending the battle between Red and White forces in Europe.

A chokha is a traditional wool coat worn in Georgia and other parts of the Caucasus that became part of the folk costume of Cossacks in southern Russia.

Wrangel was an officer of the Imperial Russian Army in World War I who took over command of the Armed Forces of South Russia, the unified forces of the White movement in southern territories that had belonged to the Russian Empire, in April 1920 — 2 1/2 years into the Russian Civil War. It is thought that his nickname came from the black “chokha” he took to wearing (although he has also been pictured wearing a white one, as in the photo above).

An armored train called “To Moscow!” that belonged to the White South Russian forces. The Whites made it as far as Volgograd, then known as Tsaritsyn, but never took Moscow from the Bolsheviks.

When he took command in April 1920, the White forces were already on the brink of defeat. A large-scale offensive that aimed to take Moscow from the Bolsheviks had failed at the end of 1919, and the South Russian forces were pushed back all the way to Crimea.

Anton Denikin, the general who had ordered the failed offensive, stepped down and put the Black Baron in charge.

A Bolshevik poster proclaiming “the final hour” for Wrangel and “Pan,” a reference to the Polish Army they were also fighting. Underneath the caricature of Wrangel is Denikin at 9 o’clock, crossed out as having been eliminated.

The British, who had deployed troops to parts of the former Russian Empire and supported the White movement, were giving up the fight — and putting pressure on the Whites to do so as well. The Western Allies had intervened in Russia’s Civil War in hopes of keeping Germany occupied on the Eastern Front by preventing the Bolsheviks from coming to power and concluding a separate peace with the Germans, which they did in March 1918. With Germany defeated later that year, the main motivation for the intervention was lost.

Sevastopol harbor in 1918. This photo is from the period of German occupation of the peninsula before Berlin’s capitulation in November 1918.

British officers in Georgia, where a British military contingent was based following German withdrawal after World War I. The British sent supplies to Wrangel’s forces from the Georgian port city of Batumi.

A secret telegram dated April 2, 1920, from the British high commissioner in Constantinople (now Istanbul) recommended that the Whites ask the Bolsheviks for amnesty and said British support would be cut off if they were to continue their “clearly hopeless battle.”

Baron Wrangel, however, was not going to give up without a fight — and would not countenance the idea of pleading with the Bolsheviks for amnesty.

Crimea lacked the resources to feed the local population along with the large numbers of soldiers and civilian refugees that had arrived from other territories of the Russian Empire. Emboldened by Bolshevik defeats at the hands of the Polish Army and allied Ukrainian forces, Wrangel launched his last offensive operation — into grain-rich southern Ukraine.

A Bolshevik propaganda poster depicts Wrangel reaching for the Donetsk Basin in southeastern Ukraine. “Wrangel is still alive — finish him without mercy,” it reads.

Advancing into what is now Ukraine’s Kherson region, the Whites put their heavy machinery to use against the Bolsheviks’ superior numbers. Wrangel, in his memoirs, praised his army’s tanks as an “especially powerful method of combat.” After initial successes in the summer, they were beaten back onto the peninsula by a Red Army offensive in October.

Bolshevik fighters are seen here with a White tank, named For Holy Rus, reportedly captured in the counteroffensive toward Crimea in October 1920. British Mark V tanks contributed to some significant White successes during the civil war, such as the 1919 capture of Tsaritsyn, which later became Stalingrad and then Volgograd.

Retreating to Crimea and unsure of how long it could be defended, Wrangel ordered that ships in the cities of Kerch, Feodosia, and Yalta prepare to transport thousands of people and horses, adding to ships in Sevastopol that had already been prepared. To keep defeatism from taking hold in the ranks at news of an evacuation, rumors were spread that the ships were being prepared for an amphibious assault, either on Odesa or the Kuban.

Wrangel inspects pilots of his military’s meager air force in Crimea, likely between April and November 1920.

The order to evacuate was given on November 13, 1920. A message to the public from the White civil administration made it clear to potential evacuees that conditions on the boats would be harsh and that “as no foreign power has agreed to take on evacuees, their eventual fate is completely unclear.” Civilians who were not at “direct risk” of reprisals at the hands of Bolshevik forces were recommended to remain in Crimea.

The evacuation fleet reaches the Bosporus.

Over four days, some 150,000 people were loaded onto “126 ships of the line, troop transports, tugboats, barges, yachts — anything that could float,” and set sail mainly for Allied-occupied Constantinople.

Most of the exiled Russian troops moved on from Constantinople to an encampment on the Gallipoli Peninsula in modern-day European Turkey — then Greek territory under French occupation. The French took on the cost of the refugees’ upkeep in exchange for a deposit of 30 ships from the Black Sea Fleet.

A general view of the camp at Gallipoli

While the exiled commanders tried to keep the army fit as a fighting force, they were faced with the problem of deserters from the very first days in exile. The French, who did not wish to support the refugees indefinitely, tried to encourage them to leave by cutting rations and recruiting the Russians into the Foreign Legion.

Don Cossacks in Serbia in 1923

Wrangel, negotiating mainly with Slavic countries that might agree to take in his men, obtained agreements with Bulgaria and Yugoslavia (then the Kingdom of Serbs, Croats, and Slovenes) to take large numbers. A White Army doctor writing about the move from the Gallipoli camp to Varna, Bulgaria, described what she saw as the disconnect between reality and the minds of the exiled White officer corps.

A memorial to White Russian troops in Gallipoli

“The final farce of the White Guard was played out at the port of Constantinople. Standing tall on a motorboat, Wrangel greeted the remnants of the army…who replied with a weak ‘hurrah.’ The top brass still considered themselves an army and did not want to accept the humble role of refugees,” the doctor wrote. “Officers were in full uniform with all of their awards, armed. Many expected a ceremonial welcome in Varna…but there was no ceremony. It was not an army that was being greeted, but refugees, emigrants. Immediately after disembarking at the port, onto Bulgarian soil, the men would disarm, and a mountain of rifles, revolvers, and sabers grew at the dock.”

Wrangel and his command moved to the Serbian town of Sremski Karlovci in 1922. Yugoslavia was one of the main White emigre centers between the two World Wars, and thousands of the incoming White troops were enlisted to serve in its border force.

Cadets of the Nicholas Cavalry School greet General Kutepov in Serbia. Some Imperial Russian military academies continued to function, for a time, in exile.

The exiled units under Wrangel’s command continued to exist as a unified military structure until 1924, when he reformed the army into the Russian All-Military Union, a global network of anti-Bolshevik emigrants with ties to the Imperial military who hoped to someday get a chance at overthrowing communist rule in Russia. During the interwar period, its members took part in conflicts such as the Spanish Civil War (on the side of the Francoists) and even carried out attacks inside the U.S.S.R.

Wrangel quickly ceded control of the union, which he only headed for two months, and moved to Belgium with his family. There, according to the official version, he died of tuberculosis in 1928.

The baron’s daughter, as well as some historians, contest this version of his death. His two successors in chairing the union, Generals Aleksandr Kutepov and Yevgeny Miller, were both killed by the OGPU, the early Soviet secret police that would become the KGB. Wrangel may have suffered a similar fate.

A man who presented himself as the brother of the baron’s orderly, Yakov Yudihin, was allowed to stay a few nights with the family. This supposed brother, whom the orderly had never mentioned before according to Wrangel’s daughter, was a sailor on a Soviet trade ship that had docked in Antwerp. Wrangel contracted his fatal illness shortly after his stay — leading to suspicions that his death was the result of a successful Soviet poisoning plot.

Wrangel’s funeral in Belgium. The poster reads, “From the Union of Gallipoli troops in Belgium to their beloved leader.”