NOTE: The Kevin Zeese Emerging Activists Fund is accepting applicants for an unrestricted grant of $20,000 until December 13, 2020. Learn more at PopularResistance.org/kevin-zeese/. And join us for a webinar with Venezuelan social movements on November 18 to hear about their upcoming elections and how we can support their struggle against US intervention. Details at bit.ly/VZvotes.

Health care will be a major issue early in the new Biden/Harris administration. Unemployment is still high with over a million people applying for unemployment benefits last week and 42.6% of working age people without a job.

Biden’s healthcare plan looks like a replay of the health reform process of 2009-10 when the Democrats effectively divided the movement in support of national improved Medicare for all and pushed through the so-called Affordable Care Act (ACA), which passed without Republican support.  Health insurance and pharmaceutical corporate profits have soared since then while people struggle to afford healthcare.

In a time of the COVID-19 pandemic when over 250,000 people have already died and the University of Washington predicts over 500,000 deaths by the end of February, we cannot allow a repeat of the failed ACA. It is unconscionable to create anything less than a universal single payer healthcare system. 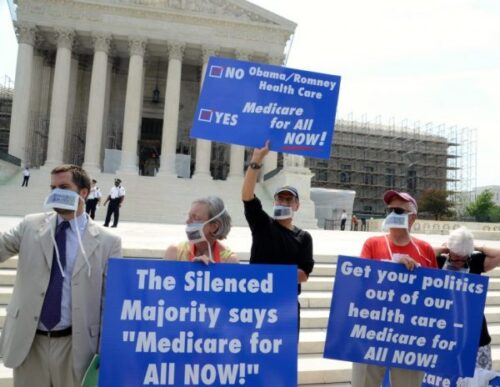 The ACA Challenge in the Supreme Court

This week, oral arguments in a case against the ACA were heard by the US Supreme Court. This is the third Constitutional challenge to the law and the second time the individual mandate, which requires people to have health insurance or pay a penalty, has been questioned.

During the first challenge, I was part of a group of fifty physicians and lawyers who filed an amicus brief with the court arguing that national improved Medicare for all is the most Constitutionally-sound healthcare system. Read the open letter here: amicus-brief-open-letter

Traditional Medicare has been our national healthcare system for seniors and people with certain health conditions since 1965. It meets the definition of “taxation for the general welfare” in Article 1 section 8 of the Constitution. On the other hand, the ACA uses our public dollars to subsidize private health insurers with hundreds of billions of dollars every year. Those health insurers then pay their CEOs multi-million dollar salaries and bonuses and dividends to their stockholders. The Congressional Budget Office estimates those subsidies will be $920 billion in 2021.

As if that wasn’t bad enough, private health insurers are taking over our public insurances, Medicaid and Medicare. Most Medicaid enrollees are in plans managed by private insurers. Over a third of seniors are in private “Medicare Advantage” plans that rip them off when they have health problems. Private insurers are working aggressively to increase their Medicare takeover. Private insurers also provide health plans to public employees and the military. Modern Healthcare reports that by 2017, 50% or more of the revenue of the top health insurance corporations came from the government.

Many of us saw what the ACA actually was, a bailout for the private insurance industry that had raised premiums so high people couldn’t afford them. The ACA not only subsidized people purchasing health insurance, it required the government to sell the plans and forced people to buy them with the individual mandate.

Ten years after its passage, the ACA has left our healthcare system in a similar state to when it began. Healthcare costs are too high. People are delaying and avoiding necessary care. Hundreds of thousands of households still become bankrupt each year due to medical illness. And at a time when support for national improved Medicare for all is high, the incoming president is advocating for more of the same. 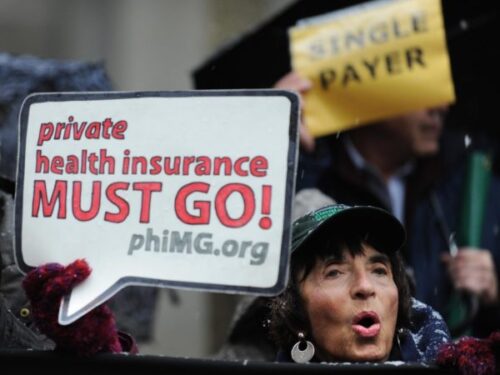 During the 2009-10 health reform process, the Obama/Biden administration used the idea of a “public option” to divide progressives away from the movement for national improved Medicare for all. Tens of millions of dollars went to unions and so-called progressive organizations whose task was to convince people that national improved Medicare for all was asking for too much but what was “on the table” was a public option that they argued was achievable and could lead to single payer healthcare.

None of what they said made sense from a health policy perspective but with enough groups saying it, people were convinced it was true. In reality, adding one more insurance to the mix of thousands of plans doesn’t change much. As exists with Medicare and Medicare advantage plans, the healthy population is courted for the private plans and when people become ill, they leave those private plans for the public plan. This puts the burden of paying for care on the underfunded public plan. When it struggles, this is used to reinforce the myth that private is better.

If a public option, the foundation of the Biden plan, were created, it would struggle to compete with the well-marketed private plans. Eventually, it would turn into a high-risk pool and fail. If anything, it would be a relief valve for the private insurers where they could offload expensive patients.

What was most striking during the last health reform process is that all along the widely-promoted “public option” was never intended to be in the final legislation. It was a ploy to keep progressives from demanding single payer healthcare. In December, 2009, when the Senate was being pressured by groups to include a public option in their legislation, as the House had done, the White House started pushing the Senate not to include it. Their plan, which they executed, was to have two different bills from the House and Senate so the final legislation would be crafted in a conference of a select group from the House and Senate in order to pick and choose what was in it. And, of course, the public option was not in the final bill.

Biden claims that he will take action to reduce the costs of pharmaceuticals. The most effective way to do this is through a national single payer healthcare system. When the government is the single purchase of goods, like medicines, it has the most leverage to reduce the prices. Without that, reducing prices in one part of the healthcare system, such as Medicare, which Biden proposes, will result in higher prices in another sector. The pharmaceutical corporations have a legal responsibility to protect their investors’ interests. They always find a way.

A single payer system also has the ability to nationalize parts or the whole pharmaceutical industry if needed to protect the public good. Imagine if production of lifesaving medications like insulin was public. Nobody would have to ration their doses or die because they couldn’t afford it. Imagine if a COVID-19 vaccine were publicly manufactured. The government could increase production and instead of selling to the highest bidder, it could prioritize giving the vaccine to those who need it the most. This is how other nations operate their healthcare systems.

A final point is that, as happened in 2009-10, an important issue will be used to win the support of Democratic Party voters and convince them to support it. Last time, they used pre-existing conditions and the cost of healthcare for women. This time, it is reproductive rights. People will be pushed to support an inadequate reform because they will be told that not supporting it means they will take away reproductive rights. This issue will also be used to differentiate the Democrats from the Republicans.

What we ought to be demanding is what we need: a national universal publicly-financed healthcare system such as national improved Medicare for all or a fully public system as exists in the United Kingdom that includes all necessary care, which means reproductive care. We must not allow the Democrats to weaken our demand that every person in the United States have access to the care they need without fear of financial ruin. The private health insurers must go. They are parasites sucking the blood out of our healthcare system and they will never be satisfied until they have it all. 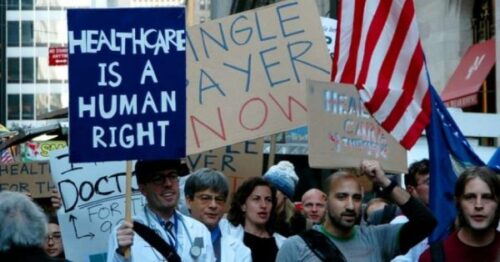 How We Win Universal Healthcare

The Democrats are using the same tactics they used in the last go-round because they work. People cannot allow themselves to be fooled again. How to avoid that was the subject of last week’s newsletter. It is critical that people know what those tactics are, recognize them when they are being used and take action to counter them.

Over the years, the biggest impediment to not achieving a universal healthcare system is that people don’t believe we have the power to win it. They believe the excuses that are used such as it is asking for too much or there isn’t the “political will” to pass it. Who creates “political will”? The people do!

And when we win this struggle, it will have two major impacts that will lead to more victories. First, it will demonstrate that people have power to achieve transformational systemic change. And second, it will create a social solidarity – everyone rich or poor in the same system – which will demonstrate that universal systems are superior to the privatized and complicated mess we have now. When we are all in the same system, we all have an interest in making it the best it can be instead of poor systems for the poor and high-quality systems for the rich. We will go on to demand other universal rights such as housing, education, internet access, jobs with a living wage and more.

This time around, the “Yes we can” slogan so common under Obama must mean that, yes, the people can overcome the plutocrats and put people over profits.

This article was posted on Monday, November 16th, 2020 at 2:18am and is filed under Activism, Barack Obama, Democrats, Health/Medical, Joe Biden, Medical Insurance, National improved Medicare for all (NIMA), Pharmaceuticals.