Several photos circulating on social media are being linked to the recent murder of a young woman in Bihar’s Vaishali district. Last month, three men from a village in Vaishali were accused of burning alive a Muslim woman. Twitter user @jokerrr577 tweeted the pictures and wrote, “A Muslim girl from Vaishali, Bihar has been taken from her house, killed and her body was later dumped into a well. Police have not taken any action & the accused person is not arrested.” (archived link)

*TW*
A Muslim girl from vaishali, Bihar has been taken from her house, killed and her body was later dumped into a well. Police has not taken any action & the accused person is not arrested.@dm_vaishali @bihar_police @yadavtejashwi @RJDforIndia @LambaAlka
#JusticeForGulnaz pic.twitter.com/qsvmoLAG8g

Another Twitter user shared these photos linking them to the incident. His caption read, “A girl was burnt alive for not marrying a guy and was dumped in a well. Just because she’s Muslim she can’t get justice? Nitish Kumar why are you quiet now!! Do something.#JusticeForGulnaz” (archive link)

A girl was burnt alive for not marrying a guy and was dumped in a well. Just because she’s muslim she can’t get justice? Nitish Kumar why are you quiet now!! Do something.#JusticeForGulnaz pic.twitter.com/uBOpBLM8Kj

According to reports, a Muslim woman was burnt alive in Rasulpur Habib village (Desri police station) in Bihar’s Vaishali district on October 30. But the photos being shared are from an entirely different case. When we performed a reverse image search, pictures of the corpse in the well and the person in the saffron kurta were found in a tweet dated August 11, 2020. According to the tweet, these pictures are from Mahnar in Bihar’s Vaishali district.

With a keyword search, we came across a News18 report dated July 21, 2020. It states, “The body of a woman who had been missing for two days from Vaishali in Bihar has been found in a well. The case comes from Mahnar in Vaishali, where the daughter of former City Council President Shah Jahan Khatoon was murdered and her body dumped in a well.” Here, the deceased girl has been identified as 17-year-old Sonam Parveen. A YouTube channel Vaishali Today also published a video report about the incident on July 20, 2020. In this, the police can be seen taking her body out of the well.

Apart from this, we could not find much information about the person in the saffron kurta.

Coming to the other two viral images, these are indeed from the recent incident of a Muslim woman burnt alive in Rasulpur Habib village. According to a Dainik Bhaskar report from November 16, 2020, Gulnaz Khatoon was burnt to death for resisting sexual harassment. Before she died, Gulnaz gave a statement to the Vaishali police where she named Satish Kumar Rai, Vijay Kumar, and Chandan Rai as her perpetrators. She died on November 15, which sparked protests by family members and individuals from student collectives and other organizations that reached Kargil Chowk with her body. As per the report, protestors blocked the square and shouted slogans against the Vaishali police and administration, demanding the immediate arrest of the accused.

Alt News compared the picture of the woman’s charred face with her video statement to confirm they are the same person. However, we are refraining from attaching the video in this report due to its sensitive nature. Apart from this, we found the image of protesters and the dead body laid out in front of them in several reports covering the Gulnaz Khatoon case. The picture shown below was published on Dainik Bhaskar on November 16. 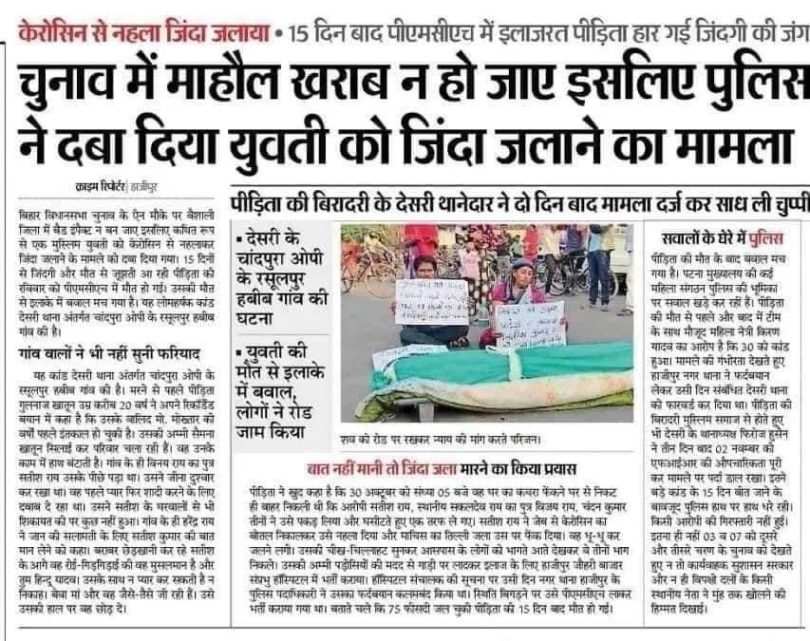 It is worth noting that none of the reports states that the victim was dumped in a well.

Therefore, photos representing two separate incidents that took place in Bihar are viral on social media. The first occurred in the Mahnar area in July 2020 where the daughter of a former councillor was killed and thrown into a well. And the second pertains to Gulnaz Khatoon’s case where she was burnt alive in Rasalpur Habib village last month.