For many first peoples, Mount Rushmore stands as a monument to oppression. Carved into stolen land as a shrine to American exceptionalism by a sculptor who sympathized with the Ku Klux Klan, the site has become a symbol of Indigenous resistance and a backdrop for protest.

Just before Independence Day, scores of land defenders gathered at the national memorial in the Black Hills of South Dakota as President Trump took the stage for a rally. They came to denounce not just his invective and policies, but the white supremacy, oppression, and violence the immense granite sculpture represents. One demand underscored the protest: Indigenous people want their land back.

The demonstration, which saw the arrest of 20 people, catalyzed a campaign to reclaim the Black Hills and close Mount Rushmore. But the idea of “landback” — returning land to the stewardship of Indigenous peoples — has existed in different forms since colonial governments seized it in the first place. “Any time an Indigenous person or nation has pushed back against the oppressive state, they are exercising some form of landback,” says Nickita Longman, a community organizer from George Gordon First Nation in Saskatchewan, Canada.

The movement goes beyond the transfer of deeds to include respecting Indigenous rights, preserving languages and traditions, and ensuring food sovereignty, housing, and clean air and water. Above all, it is a rallying cry for dismantling white supremacy and the harms of capitalism Although these goals are herculean, the landback movement has seen recent successes, including the removal of dams along the Klamath River in Oregon following a long campaign by the Yurok Tribe and other activists, and the return of 1,200 acres in Big Sur, California, to the formerly landless Esselen Tribe.

Such victories can help mitigate the impacts of climate change. In 2019, the Intergovernmental Panel on Climate Change recognized that Indigenous rights and climate action are inherently intertwined. From fire management to forest stewardship, Indigenous peoples have over generations amassed crucial knowledge about living and caring for ecosystems in a sustainable manner. It’s no wonder many consider landback a keystone of environmental justice.

“As organizers, oftentimes we do this work knowing that we may not be alive to eat the fruits of our labor,” says Krystal Two Bulls, director of the nascent landback campaign at NDN Collective. “But landback is one of those things that I know is possible. I will be alive to see Mount Rushmore closed and to see public lands in the Black Hills returned.”

Fix spoke to four Indigenous organizers and community leaders about what landback means to them, how it’s being implemented (including on traditional Maskoke land in Alabama), and how they see the movement entering the mainstream — and helping save our shared planet. Their responses have been edited for length and clarity.

The past, present, and future of the landback movement 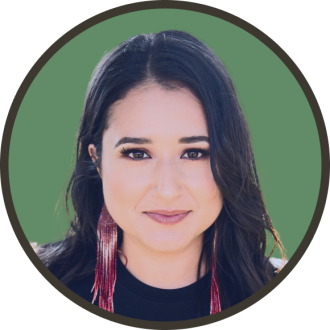 Nickita Longman is a Salteaux woman from George Gordon First Nation in Saskatchewan, Canada. Longman is a writer, scholar, and community organizer, and she served as a guest editor for the LandBack issue of Briarpatch magazine in September.

Our histories teach us that there have been generations before us driven by their own versions of landback. The online uprising of #LandBack has been so wildly popular because it’s a term that is accessible to everyone and it signals something much larger than the language often used in academia, like “decolonization” and “Indigenization.” Landback cannot be co-opted by the government and turned into a performance, either, perhaps in the way we have seen with “reconciliation.” Landback is a statement. It’s a demand. There is no room for discussion or theory, and it will not wait on recommendations or policy change.

Landback, to me, means a combination of a return to things while also taking into account the ways in which Indigenous people have evolved into the present and how we will continue to evolve into the future. Landback means access to sustainable food from the land, and it means affordable housing in urban settings. It means a return to our languages and incorporating harm-reduction strategies into ceremony. It means a return to matriarchy in a way that my generation has never known. Landback, to me, is this beautiful fusion of the core foundations of our ancestors, with room for growth and expansion in envisioning Indigenous futurisms. In 10 or 20 years, I hope Indigenous people are speaking our languages, practicing food sovereignty, and exercising full jurisdiction over land and water both in rural and urban spaces.

Non-Indigenous climate organizers should be looking to the landback movement as a source of inspiration and guidance. As Idle No More [a grassroots advocacy group for Indigenous empowerment] has stated, “Indigenous sovereignty is climate action.” It is in the best interest of the mainstream climate movement to center Indigenous land, water, and sky protectors in their organizing. To avoid doing so is to carry on the legacy of colonization and white supremacy. 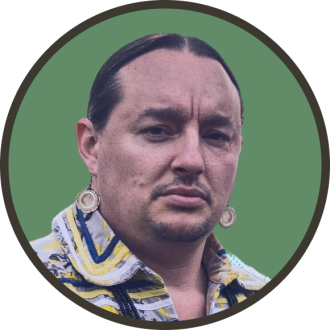 Marcus Briggs-Cloud is a Grist 50 Fixer and co-director of Ekvn-Yefolecv Maskoke ecovillage. (Ekvn-Yefolecv means “returning to the earth” In Maskoke.) The village covers 1,175 acres in Alabama, where Briggs-Cloud, 16 of his Maskoke relatives, and others are building a sustainable community, preserving their language and traditions, and living in a symbiotic relationship with the land.

The ecovillage is located an hour and a half south of Birmingham. This is traditional Maskoke homelands — almost 54 million acres were illegally ceded to the United States between 1790 and 1832 to become Alabama and Georgia. When we were thinking about where to place this ecovillage, it became spiritually evident that we needed to return to our traditional homelands. Not only to engage in physical stewardship of the land, but a spiritual renewal as well, because we have this inherent ethical responsibility to care for the ecosystems in this bioregion, where we resided since time immemorial. That teaching goes back to our origin and migration stories.

The ways that our Indigenous ancestors defined relationships to land are sparsely known today because of the impacts of colonialism. If we really want to know our relationship to land and the most authentic worldview that the ancestors left to us, we have to look to the language. 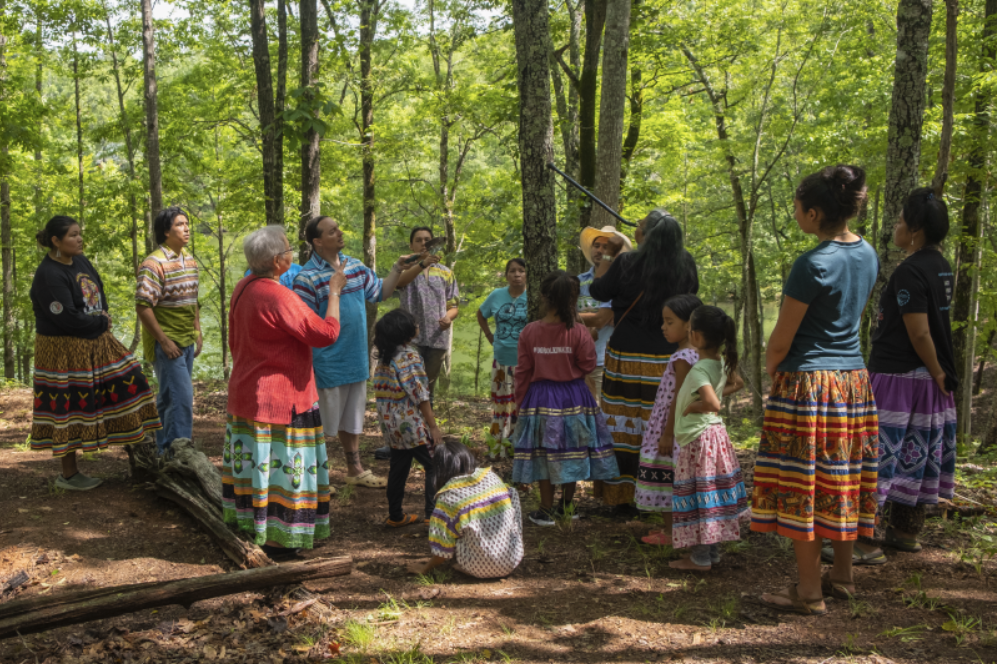 Briggs-Cloud and others identify tree species as part of their language-immersion program. Courtesy of Ekvn-Yefolecv

The grammar of our Maskoke language literally constrains our ability to articulate ownership of and extractive economic relationships to land. We have to code switch to English to speak of those ways. So if we didn’t own it in the first place, it’s hard to talk about getting land back. I think it’s better to put it in terms of returning land to the traditional stewards to fulfill their inherent covenants to be caretakers of a particular place, per their own canon of stories. When people do land acknowledgements, for instance, what we’re acknowledging is not that somebody owned land. We’re acknowledging that countless generations of ancestors before us conducted renewal ceremonies to stay in right relationship with that land.

At Ekvn-Yefolecv, we have a ceremony with every single tree before we fell it. Then we skid, debark, and mill the timber onsite, to avoid fossil fuel consumption and carbon emissions that would have been required to import timber. We are reintroducing buffalo and lake sturgeon. This fish is sacred to our people, but they were extirpated from our traditional Maskoke homelands because of the hydroelectric dams that were erected on the Coosa River. It was about 70 years ago that the last lake sturgeon were seen as naturally occurring in the Coosa watershed. This past spring, on Earth Day, we put the first group of sturgeon back into the river.

Landback affords us the opportunity to decolonize our relationship to land. And if we’re not going to be serious about that, then I don’t think that we should be engaged in seeking the return of our ancestral homelands. By decolonizing, I mean that we have to reject the commodification and exploitation of land. We have to reject the extractive economy and be willing to live simply. If we’re not living as minimalists, I think we’re fooling ourselves that we’re in right relationship with the Earth and all living beings She hosts. If it’s not the land we’re living on that’s being abused and exploited for capital, it’s some other Indigenous peoples’ traditional homelands that are being abused.

Building a campaign to sustain the movement 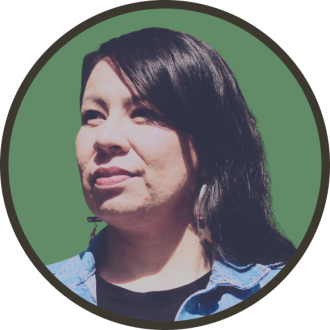 Two Bulls: The narrative that we’re putting forward is simply demanding Indigenous lands be returned to Indigenous hands. We acknowledge that this landback narrative existed long before us coming out with our campaign — this is generations and generations of work and effort and sacrifice from Indigenous peoples all over Turtle Island and even the world. What we’re doing with NDN Collective is stepping into this long legacy.

We have noticed that the fights and the movements that fall underneath landback were not coordinated and connected. Through our newly launched campaign, we are operating as the mechanism that coordinates, connects, amplifies, resources, and politicizes Indian country and all of the frontline fights that are happening.

There are a few central demands of our campaign: First is to dismantle white supremacy, period, and the systems and institutions that uphold it. Second is to defund all of the mechanisms that enforce white supremacy — the military-industrial complex, the police, ICE, border patrol. And then return. Starting with public lands, return them to the original stewards. Lastly, consent. This speaks to a shift in mindset, where we are no longer asking permission for these things. If you don’t get consent based on your decisions that are going to impact our lives and our connection to the land, then we have the right to say “no.” 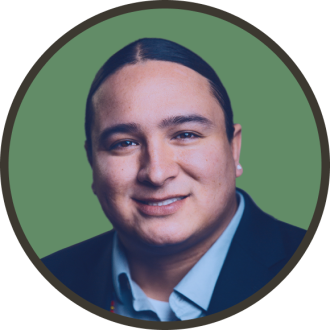 Tilsen: We believe that the Black Hills issue is catalytic to the overall landback movement. This is home to the longest legal battle between Indigenous people and the U.S. court system. The stealing of the Black Hills went all the way to the Supreme Court — which ruled that, in fact, it was a gross violation of the U.S. constitution. Yet, they didn’t return lands to our people. Last I checked, about 68 tribes have a stake in the Black Hills. Tribes use it for spiritual purposes, and have for thousands of years. When we did our action there on July 3, standing against the president of the United States in the sacred Black Hills to illuminate these issues, we used the landback narrative as part of that. It has proven to be catalytic. Quite frankly, as much as it was an action, it was also a ceremony. It was a commitment that we made to keep this work going. 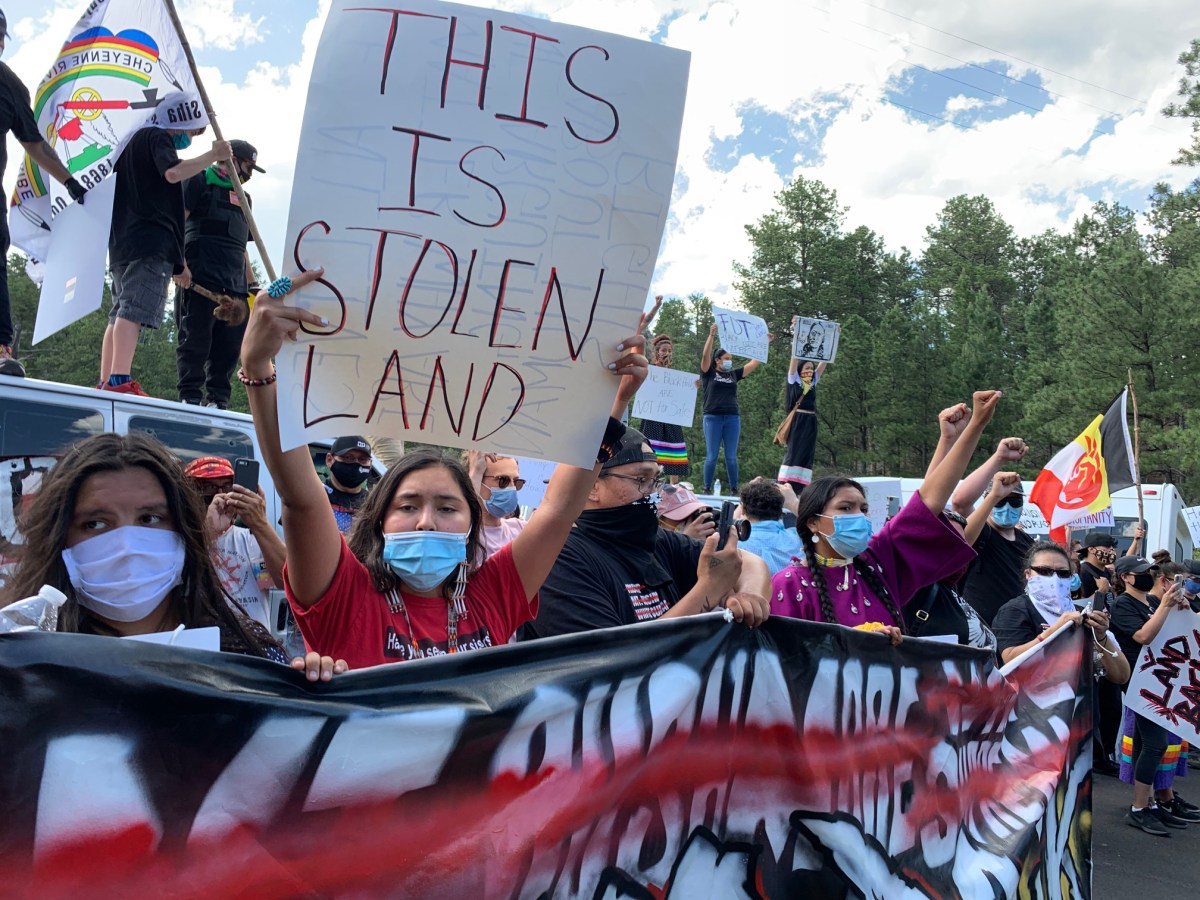 What we’re calling for now is an entirely new policy era based on free and prior informed consent. If you look at how the United States and other colonial governments dealt with Indigenous people, we were originally dealt with in the department of war. And then we moved over into some kind of quasi-tribal government structure that was created by the oppressors. And then they decided that was too expensive. So then came the termination era, in which the federal government terminated assistance and the legal status of more than 100 tribes. And then, because of the rising of the 1960s and ’70s, came the self-determination era; tribal consultation became a bedrock of that policy era. It’s important to understand that arc when we talk about moving into this new era of consent. It’s also important to note that this is consistent with the United Nations Declaration on the Rights of Indigenous Peoples.

What we’re saying is, don’t create places for us in your white-supremacist structures. We actually want to create our own systems founded in Indigenous values. For us, if you’re going to have racial justice and racial equity for Indigenous people in this country, it has to include landback. It’s not a choice. It’s a demand.