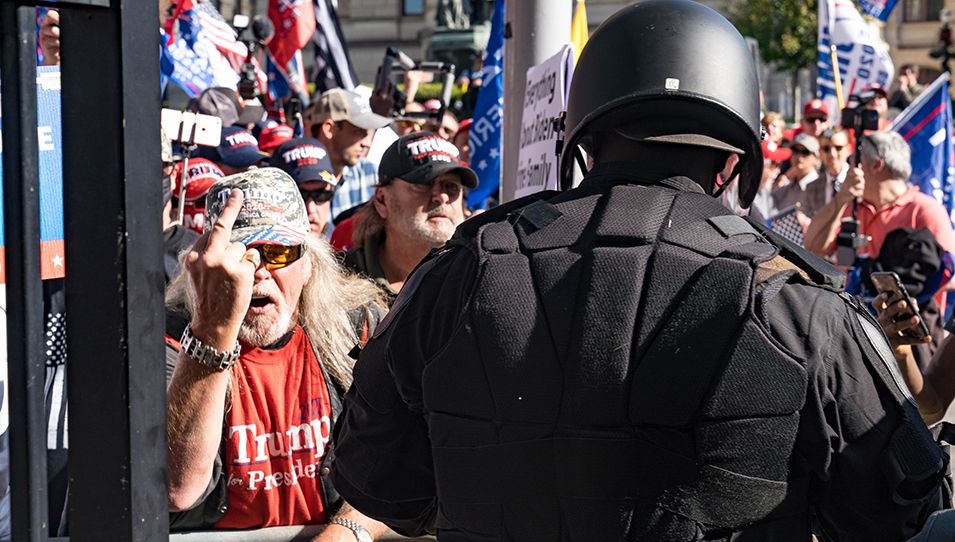 There are moments in the history of any democracy when political forces converge to weaken democratic institutions and inflict deep wounds on the acceptance of democratic norms.  We are living through such a period now.

As a participant and observer of the American democratic experiment, I know I am among many who have experienced the lead up and aftermath of the election as unnerving.  Trump’s pre-election attacks on mail voting, his repeated refusal to say he would leave even if the election went against him, and his remark that the racist and violent Proud Boys should “stand by” led me to join tens of thousands of people who organized against what appeared as a potential coup attempt.  Coalitions such as Protect the Results and Choose Democracy were formed along with local mobilizations across the country, including Washington State.  Never could I have imagined becoming involved in such an endeavor.

The alarm was warranted.  For sixteen days following Biden’s electoral victory, Trump and his allies used every means possible to overturn the election results.  Now that their efforts have apparently failed, I turn toward the long-term consequences.

Fantastical claims of victory, fraud and conspiracy have raced through social media and right-wing news sites.  The myth of a stolen election quickly took hold resulting in 77 % of Trump backers saying Biden’s win was fraudulent. “Stop the Steal” demonstrations proliferated.  Trump continues to refuse to concede.

We should have expected no less from Trump.  But what about Republican Party leaders who with few exceptions and even now have been actively or passively complicit in Trump’s desperate maneuvers and his ongoing refusal to admit defeat?

A careful reading of history demonstrates that democratic institutions cannot survive without a vibrant democratic culture.  The legitimacy of elections is one of the foundations of such a culture.  If people are led to believe an election was stolen, the newly elected president is gravely weakened.  I surmise this is the Republican game plan.  If so, it is a dangerous game that throws democracy’s foundational institution into crisis.

We should be extremely concerned about the damage the refusal to concede inflicts on democratic culture.  Without electoral legitimacy, opponents are turned into enemies and the civility needed for debate informed by a common commitment to facts evaporates.  I fear that Trump’s base, feeling victimized and resentful, will likely become more involved in conspiracy theories like QAnon.  Racist and xenophobic narratives of demographic replacement and subordination will become even more persuasive.  Phantasms of Antifa invasions and black-on-white violence, and leftist takeover become more prominent.  Not least, people who feel victimized by stolen elections are more likely to support or adopt undemocratic means for advancing their political agendas.  Far-right groups prone to a punitive mindset, armed display, and violence have already demonstrated their strength.

Democracy is a work in progress.  Throughout American history, social movements opposed to injustice and for inclusion and equality have been democratic struggles. They have always encountered fierce resistance.   Elections are an essential site for such struggles and therefore must be protected against any attempt to suppress the vote or undermine electoral legitimacy.

On November 7th, when the Biden-Harris victory became certain, an enormous democratic energy was released.  The nation’s most authoritarian leader had been defeated by democratic means.  The upsurge in democratic spirit is heartening and will contribute to a renewal of collective will to confront the Covid pandemic and its economic consequences.  It will also galvanize support for racial justice and electoral reforms.

One lesson I have learned from a lifetime of teaching and study, strongly reinforced by our recent experience, is that nothing about democracy is guaranteed.  If Republican leadership continues to fail in its obligation to protect democracy, the judgment of history will fall on its shoulders.