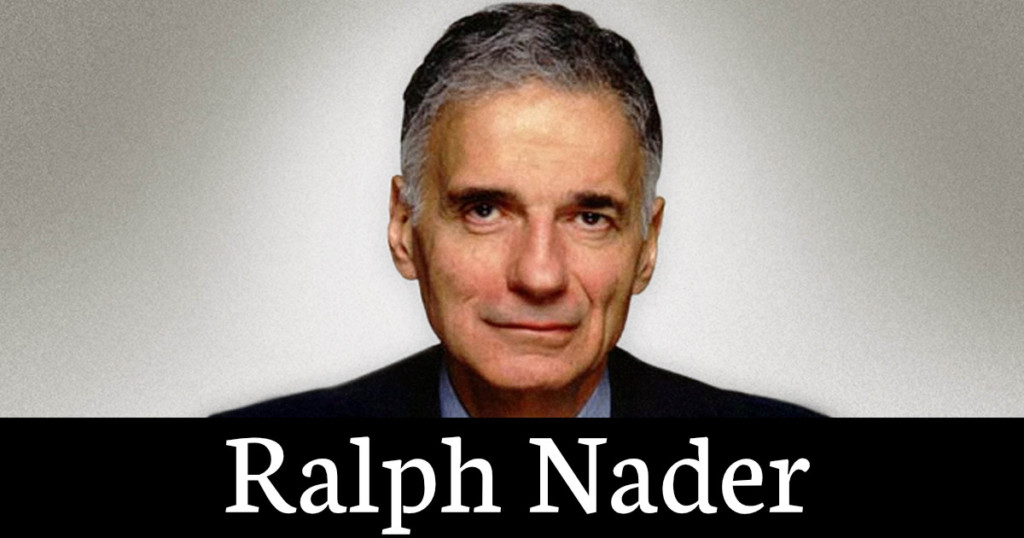 November 30, 2020, marks the 55th anniversary of the publication of Ralph Nader’s landmark
book Unsafe at Any Speed. The book highlighted the faulty rear suspension system of the General
Motors Corvair, This defect could cause the Corvair to skid violently and roll over. The corporate
negligence that produced the various Corvair defects, Nader said, was “one of the greatest
acts of industrial irresponsibility.” More broadly, Unsafe at Any Speed documented how Detroit
habitually subordinated safety to style and marketing concerns. The main immediate cause of automobile occupant injuries, Nader demonstrated, was not the “nut behind the wheel” so often blamed by the auto industry, but the inherent engineering and design deficiencies of motor vehicles that
were woefully unsafe, especially in terms of precluding “crashworthiness”—no seat belts, etc. TIME Magazine listed Unsafe at Any Speed as one of the 100 best and most influential books in the English language.

The publication of Unsafe at Any Speed led to GM’s contemptible investigation by private
detectives and attempts to smear Nader, GM’s subsequent public apology at a Senate hearing started the legislative process that quickly led to the 1966 auto- and highway- safety laws, which have saved countless lives and profoundly accelerated the pace of auto safety innovation.

On March 22, 1966 at a Senate hearing chaired by Senator Ribicoff, James M. Roche, the
President of GM, apologized to Nader saying:

As president of General Motors, I hold myself fully responsible for any action authorized or
initiated by any officer of the corporation which may have had any bearing on the incidents
related to our investigation of Mr. Nader…. While there can be no disagreement over General
Motors’ legal right to ascertain necessary facts preparatory to litigation… I am not here to excuse, condone, or justify in any way our investigating Mr. Nader. To the extent that General Motors bears responsibility, I want to apologize here and now to the members of this subcommittee and Mr. Nader. I sincerely hope that these apologies will be accepted. Certainly I bear Nader no ill will.

This episode catapulted auto safety into the public spotlight, leading to a series of landmark laws
that have prevented millions of motor vehicle-related deaths and injuries. In particular, the
publication of Unsafe at Any Speed put forces in motion that brought about the passage of the
law that created the National Highway Traffic Safety Administration (NHTSA) in order to assert
federal leadership in auto and highway safety. The agency was empowered to set minimum,
uniform safety, performance, and fuel-efficiency standards for all motor vehicles, and
to require automakers to notify owners and recall cars containing safety-related defects. The
episode also established Nader in the public mind as a fierce, incorruptible advocate and
watchdog, a reputation that launched one of the most singular and enduring roles in American
politics. Nader has used his considerable talents as an organizer, activist, legal analyst, and
author to rally public opinion, start many citizen initiatives, and push through hundreds of
reforms in business, government, and various professions.

In November of 1966, Ralph Nader’s lawyer, Stuart Speiser, filed suit against GM for its harassment, invasion of privacy, attempted intimidation, and other nefarious actions. In 1970, GM settled with Nader, agreeing to pay him $425,000, which he used to found several public interest organizations. Newsweek Magazine remarked that this settlement will, in effect, serve as “General Motors’ contribution to the consumer movement. They are going to be financing their own ombudsman.”

In addition, Nader helped establish the state-based PIRGs—Public Interest Research Groups—
which are consumer organizations that function on college campuses and in communities in 23
states. The PIRGs have published hundreds of groundbreaking reports and guides, lobbied for
laws in their state legislatures, and called the media’s attention to consumer, environmental, and
energy problems. Many other nonprofit advocacy groups followed in the wake of these Nader-
inspired organizations.

An author, lecturer, attorney, and political activist, Nader’s life-long work and advocacy have led
to safer cars, healthier food, safer drugs, cleaner air and drinking water, and safer work
environments. In 2006 he was cited by The Atlantic as one of the one hundred most influential
figures in American history, TIME Magazine has called him the “U.S.’s toughest customer,” the
New York Times has said of him “[w]hat sets Nader apart is that he has moved beyond social
criticism to effective political action,” and in 1974, a survey conducted by U.S. News and World
Report rated him as the fourth most influential person in the United States.

Nader continues to work relentlessly to advance meaningful civic institutions and citizen
participation as an antidote to unaccountable corporate and government officials.

Not only did the publication of Unsafe at Any Speed spur the creation of many necessary organizations, it also provided a fundamental and resilient framework for protecting citizens from corporate malfeasance can expand to meet old and new injustices.