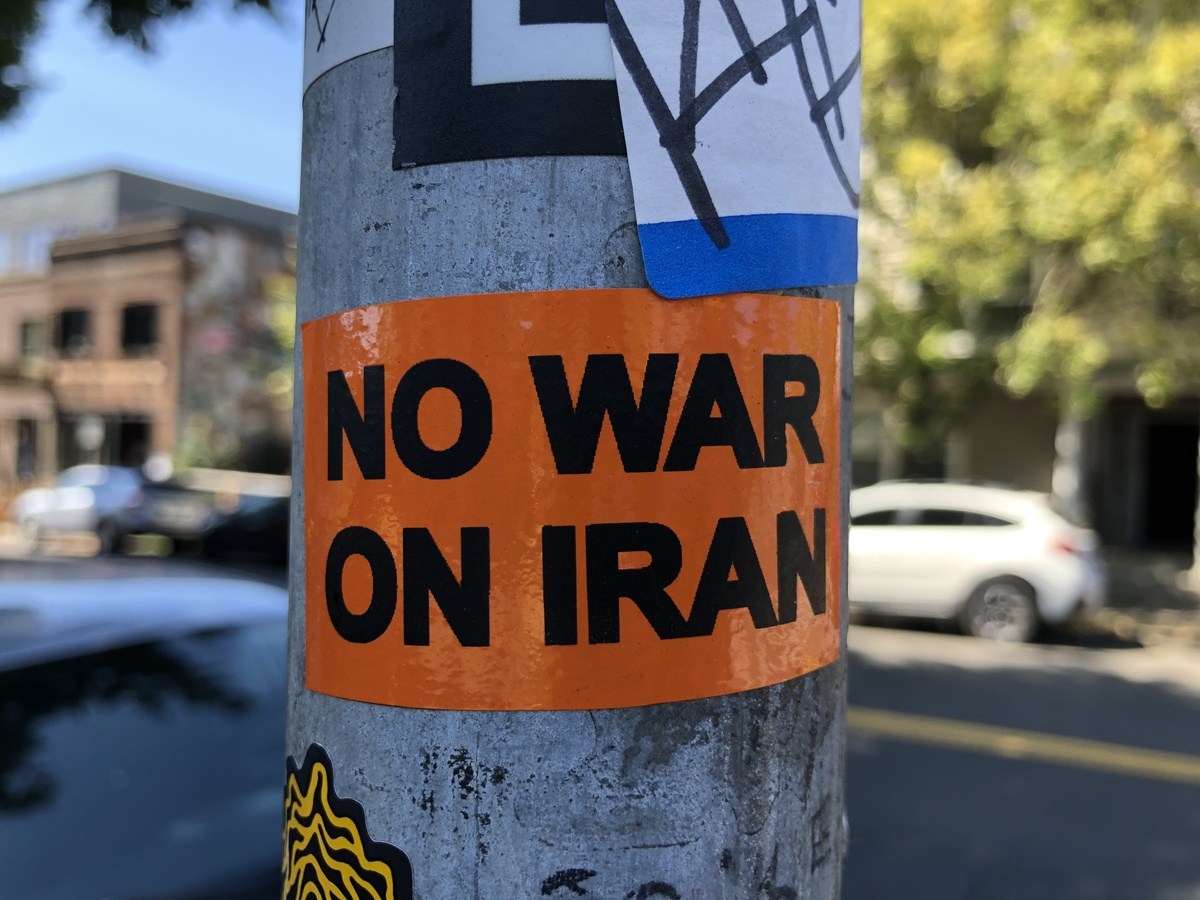 For centuries now the Iranians have been great chess players!!! More on that later.

The extra-judicial assassination of Dr. Mohsen Fakhrizadeh, Iran’s top nuclear scientist, is but another act of terror in an uptick in U.S. and Israeli military operations against the Iranian regime and its citizens. As the countdown to the January 20, 2021 deadline draws near, Israel, Saudi Arabia, and UAE’s window of opportunity to draw the U.S. into a war with Iran narrows.  For the above-mentioned, there will never be another fifty-day opportunity to have a xenophobic megalomaniac unleash a “war like you’ve never seen before” on Iran. The sole purpose of this murderous assassination is to draw Iran into a military conflict with the U.S.

Donald Trump’s four-year attempts to break Iran’s will have failed miserably; his vengefully maniacal regime of sanctions and verbal threats to impose a new, renegotiated nuclear deal (orchestrated by Netanyahu and the Foolish Gulf Arabs) is as dead as a nail. Having lost his second bid for the presidency, Trump has consigned himself to the sphere of denial, anger, and bitter rancor.

To the ancient Athenians Lytta was the spirit that personified mad rage and frenzy.  She was closely related to Maniae, the spirit of madness and insanity. The Roman equivalent was Ira, better known as Furor or the Rabies.

Having been soundly beaten by Sleepy Joe, the great deal maker is desperately looking for an outlet to vent his rage and fury. This is perhaps the very first rejection Trump’s experienced in his adult life. Pining to drop “the mother of all Bombs,” including all her children and assorted lethal kindred on Iran’s nuclear facilities, has been on Trump’s mind since 2015. Gambler Sheldon Adelson will quadruple the money.

Some two weeks ago the Donald consulted with a cadre of his subservient walking-on-egg-shells White House advisors on whether and how to bomb Iran’s nuclear facilities. Fortunately sane minds discouraged the short-tempered, belligerent, and mercurial pugilist/boss from doing so.

The extra-judicial U.S. assassination (very likely at Israeli, UAE, and Saudi bidding and complicity) of Iranian General Qassem Soleimani in Baghdad on January 3, 2020 was but a prelude to the following 2020 acts of U.S./Israeli sabotage, violence, disruption, mayhem – all in an attempt to bring down the Iranian regime: an explosion at Iran’s Natanz nuclear facility, a fire and sabotage of an aluminum processing plant, explosions that damaged and crippled seven commercial ships, and punishing electronic sabotage of Iranian electric grids and digital platforms.

The above-mentioned does not include the almost weekly Israeli attacks on Iranian interests in Syria and Iraq in which scores of Iranian citizens have been killed.

Neither do the afore cited include the crippling U.S. economic sanctions on Iran, especially, and including vengeful, crippling sanctions on much needed medicine and medical equipment. This abhorrent policy, at a time when Covid-19 is exploding exponentially in Iran, has been in Donald Trump’s xenophobic crosshairs as far back as 2015. In his scorch earth policies of  nullifying myriad Obama policies, including the Iran nuclear deal (painstakingly hammered out by Obama, China, Russia, and a handful of EU countries), Iran was at the top of  Donald Trump’s  sniff, search and destroy list.

Besides, What Bibi wants, Bibi gets. Invited by pandering Republications to debase the hallowed Congressional House, Netanyahu’s 2015 speech against the Iran nuclear deal was a full-fledged hectoring and lecturing of Obama;   pandering Republican (and a handful of Democrat) legislators gave impresario Bibi over 60 standing ovations. Adding insult to injury, During Obama’s 8 years in office,  Netanyahu rubbed Obama, Biden, Hillary, and John Kerry’s noses in Zionist dog dodoo. And like the abused spouse, Obama tucked his tail, served as Netanyahu’s water boy, and ended up pledging a guaranteed no strings attached annual $3.8  billion gift to Bibi, a pledge that has only recently been codified into U.S. law by  an overwhelming number of pandering Democrat and Republican legislators.

Any wonder, then, about Bibi’s ambitions to rule the Near East?

Ironically, placating Netanyahu and Adelson did not help sway the Jewish vote in Trump’s favor. Over 70% of American Jews are smarter than that; they are fully cognizant of Trump’s latent anti-Semitism.  In a pre-election White House ceremony, The Donald ingratiatingly gave his co-equal megalomaniac the ceremonial Golden Keys to the White House. Not only did Netanyahu metaphorically move into the White House, but he also took over, bossing Pompeo, Pence, and 90% of the compliant, servile and pandering members of Congress.

For their part, EU countries have been enablers. And just as the U.S. dispenses with principles and sells billions of dollars’ worth of destructive military materiel  to the rulers of the Foolish Gulf Arab States, EU countries, including Germany, France, and Britain, are  peddling their military hardware to these same Foolish Gulf Arabs. And soon Israel, if it hasn’t already done so, will be peddling its vast array of weaponry, many of which have been field tested on Palestinians.

I bet the so-called greedy Western democracies laugh their way to their central banks to see Foolish Gulf Arab oil money squandered on destructive lethal playthings and recycled into dollars and Euros.

In times past every hopeful U.S. presidential candidate would trek to Israel, don a skull cap, visit the Wailing Wall and the Holocaust Memorial, and promise open ended support to the “only democracy in the Middle East.”

All this is now passé. On the Republican side, Mike Pompeo, Marco Rubio, Lindsey Graham, Chris Christi, Tom Cotton (a hardcore callous Fascist and Trump clone), Nikki Haley, Ted Cruz, to name but a very few presidential aspirants, never miss an opportunity to pander to Zionist interests. Likewise, no less than 15 Democrats are carbon copy bookends. No need to travel to Jerusalem. Just vote on every piece of legislation supporting the Zionist state, attend AIPAC’s Annual Hate-the Palestinians Fest, and pledge unlimited access to Ft. Knox and the United States treasury.

Mike Pompeo’s recent trip to the Near East positions him to be in first place for the 2024 presidential run, alongside Loser Donald Trump, should he decide give it another try.

11/19/2020: Mike Pompeo visited Israel and the occupied West Bank of Palestine. The first U.S. official to visit an illegal Israeli settlement, Pompeo declared the Israeli settlement a part and parcel of Israel and, by extension, sprinkled his and the U.S.’s holy water on the annexation of the West Bank. He also discussed  “our joint [U.S. Israeli] efforts to address Iran’s malign activities.” From there he flew to the Persian Gulf to visit Abu Dhabi, UAE, Qatar, and Saudi Arabia where he conferred with (more like plotted)  Al Munshar (Ar. The Saw, ref. to Khashoggi).

11/23/2020: according to Israeli sources, on 11/23/2020 Benjamin Netanyahu took a midnight Hajj flight to Saudi Arabia to meet with Pandering Pompous Pompeo and the Al Munshar.

Foolish Arab Gulf potentates, dictators, rulers for life, corrupt and no so corrupt sheiks, Do not Fall for Pimping Pompeo’s promises, and here is why: 1. To build his bona fides with American Zionists, Pompeo is more interested in placating AIPAC than he is in your welfare.  2. He is a lackey of the Evangelical tribe, xenophobic cheerleaders for the Armageddon, a time when Jews will be slaughtered en masse.  3. As a Merchant of Death, he is peddling armaments that, once blown up, will rob your citizenry of precious resources. 4. If you think that pompeo, Trump, or, for that matter, American politicians have a genuine interest in your wellbeing, then your memories are very short. Just think of the way Libya, Syria, Iraq, Afghanistan, and Palestinian Gaza have been pulverized back to the stone age. And remember how Saddam, Qaddafi, Soleimani, Fakhrizade, and numerous Palestinian leaders were obliterated, Saddam in a barbaric hanging that went awry, and Qaddafi in a primitive ritual of sodomization with a bayonet. She [Hillary et. al.]  came, she saw, he died Hah! Hah!

Each of you, Gulf Arabs, are but mere “Hah Hahs to Israel and the colonial West.

And finally, Gulf Arabs, don’t be so sure that if and when a war on Iran occurs the U.S. will honor any guarantees of protection. Think of the Yazidis, Kurds, Shiite, Syrians and others who were expediently left out in the cold. And remember the Arab saying ”Hatto fi booz al madfa’a” (Arabic for “he placed you in the mouth of the cannon’s barrel.” Since 1917 the Brits, French and now the U.S.  have played the Arab and Muslim worlds for peons in their grand colonial chess game. In a war with Iran there will be winners and losers: Iran will no doubt suffer greatly, and you, Gulf Arabs, will not be immune from an Iranian response. You, too, will be fodder for American military might. The only winner will be Netanyahu. Unlike the cowardly modern Arab armies whose many military retreats and defeats are legend, the Iranians have been and will be steadfast in their resolve to defend their country and exact a heavy price on you, the Foolish Arab countries of the Gulf. Once the carnage is over, Brown and Root will bilk you for rebuilding your ravaged countries.

And shame on Muslims, Sunni and Shite alike, for waging wars against each other. The lessons of Europe’s religious wars between Catholics and Protestants should be a lesson for all wars waged in the name of “My God is bigger than your God.”

Finally, no sane person dare step into an enclosure in which a penned and badly gored beast is chomping at the bits to exact his pound of flesh and lash out in maniacally vengeful clawing at anything in site. Over a lifetime of having its way in the wild, the beast’s primordial instincts drive it to a destructive mauling, a kind of  Shakespearean denouement that lays waste to many bad characters.

In Shakespeare’s case, however, after chaos, a new world order emerges to reset  the social order, expunge the evil, and bring catharsis to the heretofore broken realm.

Seething in anger, Donald Trump is likely to vent his frustrations in a “to totally destroy” Iran fit of anger, leaving Joe Biden to try to pick up the shattered shards. And as long as Trumpus Pandemicus is in office, Iran’s best policy is to lie low.

And, while “I am a Zionist” Biden will attempt to cobble some measure of a modus vivendi with Iran, he will be constrained by his love affair with AIPAC and his new team of advisors, many of who are Israel firsters.

In the political chess game waged between Iran, Israel, the Foolish Gulf Arabs, and the United States, Iran is behind the 8 ball. And even though Iran’s Queen, 1 bishop, 1 knight,  1 rook, and half the peons have been obliterated, the Iranians will play their chess game carefully.

If anything, the Ayatollahs would be wise to let up on their repression and leverage this egregious assassination  into a bartering stance with EU, China, Russia, and the incoming U.S. President.