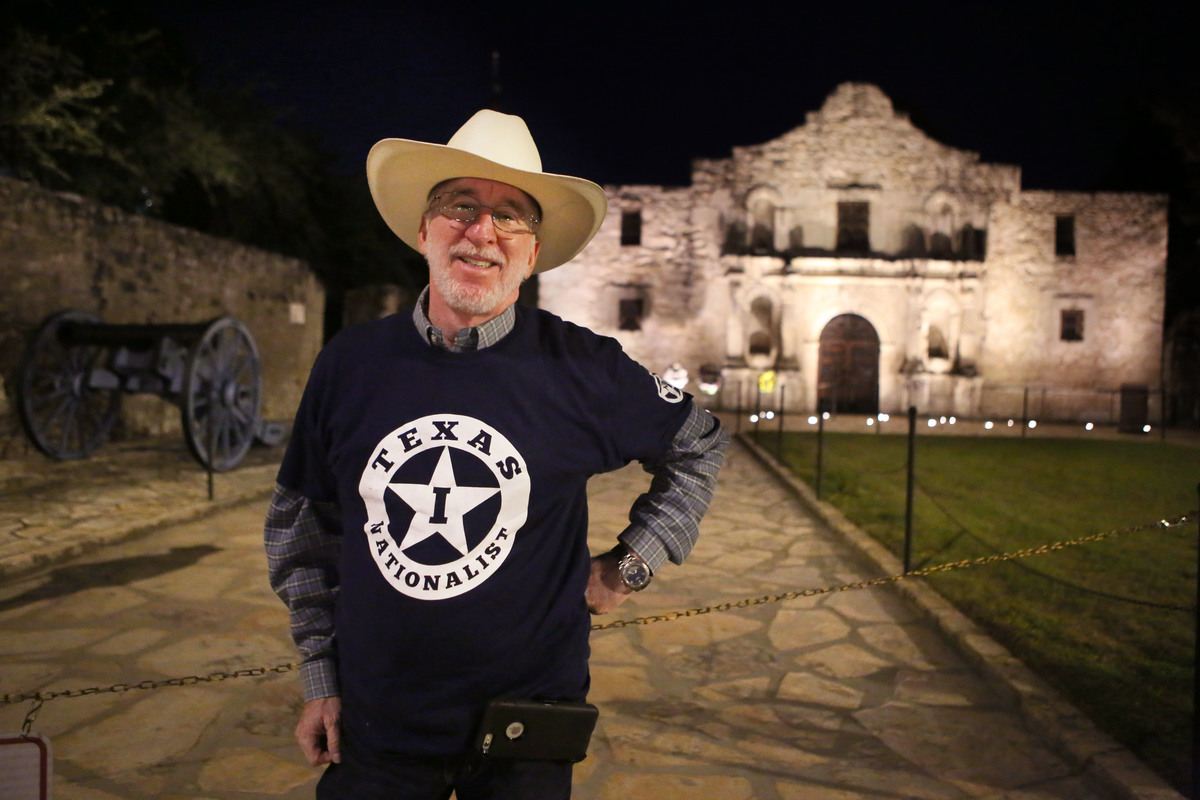 The Bexar County coordinator for the Texas National Movement, Karl Gleim, poses in front of the Alamo Monument after the monthly wreath laying in San Antonio, Texas. Alexander Thompson/Reporting Texas

On a balmy evening in November, a somber, slow-moving 68-year-old man removed his wide-brimmed cowboy hat and placed it over his heart. Moments earlier, Karl Gleim had laid a wreath in front of the most famous building in Texas. To Gleim, the wreath laying was a sacred act, one the retired state worker has participated in monthly for the last three years as a member of the Texas Nationalist Movement.

Under the guise of making the Alamo more visitor-friendly and inclusive, officials want to erase the Battle of the Alamo from the minds of future generations, Gleim said. The San Antonio City Council and George P. Bush, Commissioner of the Texas General Land Office, want to turn the Shrine of Texas Liberty, Gleim said, “into a United Nations-run, progressive lesson on the evils of Anglo imperialism.”

Proponents of the Alamo redevelopment plan—which the City of San Antonio and the Texas General Land Office agreed to in 2018—say Gleim and likeminded Texans are misinformed.

“They say I’m trying to erase Anglo-Saxon history, but we’re not,” San Antonio City Councilman Roberto Treviño said. “The full story of the Alamo hasn’t always been told. For too long many Mexican-Americans have felt disconnected and victimized by the story.”

The battle over how to redevelop the Alamo and remember the site’s history has provoked death threats and emerged as a cause célèbre among Texas’s network of grassroots conservatives, some of whom believe Bush, whose mother is from Mexico, planned to erect a statue of Mexican dictator Santa Anna at the Alamo. Bush called the rumor “patently false” and “flat out racist.”

The fight is a flashpoint in the national conflagration about whose version of history we should officially sanction. It’s a fight over how to honor, if at all, men who putatively fought for liberty, yet enslaved and killed people of color.

At the Alamo in 1836, Lt. Col. William Travis commanded a group of about 190 men—mostly Anglo settlers of what was then the Mexican state of Coahuila y Tejas. The group included Davey Crockett, the most famous American in the world at the time, and Jim Bowie, American folk hero, famed knife fighter, and slave trader. They faced off against at least 1,500 Mexicans under the command of Santa Anna. They fought to the death.

“The men died,” Gleim said, “defending the most Texan of ideals—liberty and freedom.” These ideals, he added, are again under vicious attack by those Gleim sees as wanting to rewrite history.

In December 2019, heavily-armed activists gathered in Alamo Plaza to protest the relocation of the Alamo Cenotaph, a 60-foot tall marble statute erected in 1939 to honor the Alamo defenders. Moving the Cenotaph 500 feet south, city officials say, is essential to redeveloping in a way that reflects the site’s 300 years of cultural history. The Alamo was founded as a Spanish mission in the early 18th century and was an important site to Native Americans. The Cenotaph overpowers the area, officials argue, and represents only one moment in history.

In May 2020, dozens of self-styled modern-day Alamo defenders—many with weapons at the ready—again made a show of force at the site. The day before, someone had written “[down with] white supremacy,” and “[down with] the ALAMO” in red spray paint on the Cenotaph.

And in September 2020, dozens of Texans—many members of a group called This is Texas Freedom Force—offered fiery testimony as the Texas Historical Commission debated moving the Cenotaph. The commission denied the city of San Antonio’s request to do so.

Prominent state politicians—including Lt. Gov. Dan Patrick—have proclaimed their opposition to changing the Alamo in any way that would take the focus off the 1836 battle. Gleim appreciates the support, but he is not convinced his side will win.

Nevertheless, like the Alamo defenders in 1836, Gleim told me, “Texas patriots have crossed a line in the sand and are prepared to take a stand for freedom.” 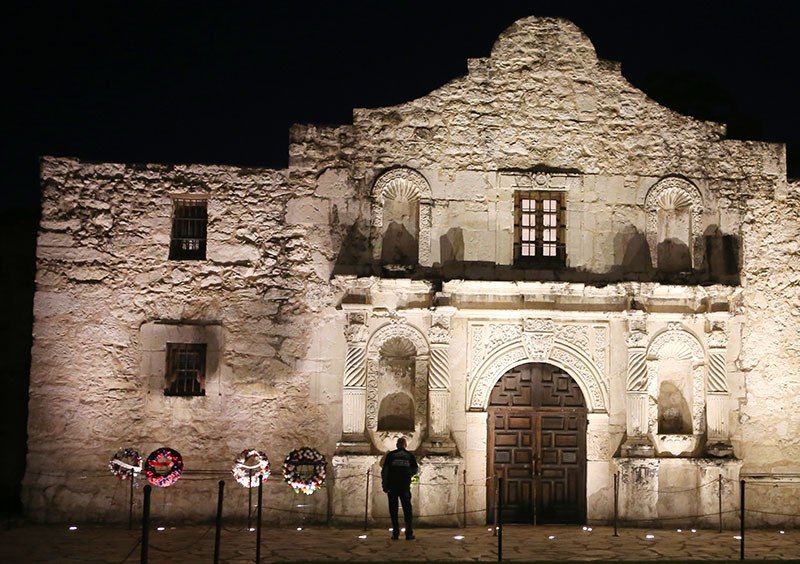 On the afternoon of May 30, a group of Black Lives Matter supporters yelled at a row of San Antonio police standing in front of the Alamo Cenotaph. The death of George Floyd had driven hundreds of thousands around the country to the streets in protest against racial injustice. San Antonio was no exception.

San Antonio native 43-year-old Brandon Burkhart, a white man, stood a few feet behind the police with several dozen members of This is Texas Freedom Force. Heavily armed, the men had heard that protesters aimed to damage the Alamo, Burkhart said. He later told me the protestors’ goal was “to destroy Anglo-Saxon history.”

Standing 6 foot 4 inches tall and weighing north of 240 pounds, Burkhart struck an intimidating figure. As the president of This is Texas Freedom Force, a group that “preserves Texas History and protects Texan’s Rights,” according to organization’s website—Burkhart is passionate about Texas and what he sees as threats to Texans—namely the removal of Confederate monuments and government infringement on the right to own guns. Perhaps the most pernicious threat to the Texans, Burkhart contends, are the liberal politicians who want to rewrite the history of Texas’s most sacred site.

Burkhart has been an outsized presence at dozens of public meetings on the Alamo redevelopment. In 2018, he was thrown out of an Alamo Citizen Advisory Committee meeting for yelling at committee members, including San Antonio Councilman Robert Treviño. “Treviño,” Burkhart said, “is nothing more than a Mexican army sympathizer.” (Treviño told me he has received at least a dozen death threats due to the Alamo redevelopment plan.)

After sharing his opinion of Treviño, Burkhart encouraged me to visit This is Texas Freedom Force’s Facebook page. (Facebook deactivated the page in November.) The page was replete with photos of guns and memes that make clear the group’s cultural perspective—“Shooting someone who says ‘I’m from California,’ should be considered self-defense”; “Texas Lives Matter, no one cares about the color of your skin”; “Texans—Women love us, Antifa fears us.” The group’s website offers T-shirts for sale—one with the slogan “I came to party like it’s 1836”—and for $40 you can have a membership card and a Velcro This is Texas Freedom Force patch.

“We’re going to keep fighting for our history,” Burkhart said, “no matter who gets in our way.”

On a sunny Sunday afternoon in September, San Antonio resident Ruben Cordova pointed up at the Alamo Cenotaph. “Calling the Alamo a shrine of liberty reflects a misunderstanding of why these men were fighting,” he said. Cordova, an art historian who curated The Other Side of the Alamo: Art Against the Myth, at San Antonio’s Galería Guadalupe in 2018, motioned for me to walk to the other side of the monument.

“They were fighting for Mexican land and the right to enslave black people on that land,” Cordova said.

Many Texans refuse to confront this history because the site is part of the creation myth of Texas, Cordova said, but the words of the Republic of Texas’s founding fathers are clear.

On May 4, 1836, Stephen F. Austin—one of the first Anglo settlers to Texas, the first Secretary of State of the Republic of Texas, and regarded by many as the Father of Texas—wrote to Missouri Sen. L.F. Linn to request aid for the Texas War of Independence. Austin called the fight “a war of barbarism and of despotic principles, waged by the mongrel Spanish-Indian and Negro race, against civilization and the Anglo-American race.” Austin, who had worked for years to make slavery legal in Texas, also warned of “negro insurrection” and called Mexicans the “natural enemies of white men and civilization.”

After the battle, “remember the Alamo” became a slogan for anti-Mexican sentiment in popular culture, Cordova added. The 1915 movie Martyrs of the Alamo— produced by D.W. Griffith, the director of the virulently racist Birth of a Nation—portrays Mexicans as lecherous and evil and helped fuel the Texas creation myth, Cordova said.

The erection of the Cenotaph, John Wayne’s 1960 film Alamo, and inaccurate school books have all fueled the myth, Cordova said. It’s a stubborn myth still officially sanctioned by the state, he added. In 2018 historians called for the Texas State Board of Education to change state curriculum standards which refer to the Alamo defenders as “heroic.” The board demurred.

Cordova also suggested that this anti-Mexican sentiment is why President Donald Trump mentioned the “last stand” at “the beautiful, beautiful Alamo” in his 2020 State of the Union address.

After speaking with Cordova, I called Frank de la Teja, the inaugural State Historian of Texas in 2007. When de la Teja talks about the Alamo, people don’t always like what they hear. Offering a complex understanding of the most sacrosanct Texas origin myth makes people uncomfortable, he said.

The story of the Alamo and the founding of Texas is “not solely a racial story, but race does play a role,” de la Teja said. The men who fought for Texas independence, he said, were also fighting to keep black people enslaved.

Getting Texans to take a more nuanced view of the Alamo isn’t easy, he added. It’s one reason past attempts to redevelop the Alamo didn’t gain traction.

“Updating the Alamo to make it more significant to a broader population would be good,” de la Teja said. “There’s history beyond the 13-day battle in 1836.”

Standing a few feet west of the Alamo Cenotaph on the evening of Sept. 22, Burkart couldn’t stop smiling. The Texas Historical Commission had just voted to block the City of San Antonio’s request for permission to move the Cenotaph. Some observers were stunned.

During the meeting, Treviño and U.S. Rep. Will Hurd, the only black Republican in the House of Representatives, passionately presented the city’s case. Lt. Gov. Dan Patrick, several state representatives, and dozens of opponents of moving the monument also weighed in.

“The architects of this plan have hidden their true motives,” one man said, “they want to erase our history.”

Wallace Jefferson, commission member and former Chief Justice of the Texas Supreme Court, voted in favor of moving the monument. Jefferson, a black man and a Republican, said he was disappointed by the public testimony of some who “questioned people’s motives instead of focusing on an objective analysis and practical concerns.”

Archeologist and commission member Jim Bruseth voted against granting the permit to move the Cenotaph. “The emotional public response affected the vote, but commissioners considered the totality of the evidence,” Bruseth said.

At a San Antonio City Council meeting in November, Treviño, was more sanguine.

“We as the San Antonio City Council must continue to fight for the soul of this project,” he said. “We owe it to the generations of people who call San Antonio home to tell their stories and assure their history is preserved.”

The post The New Battle of the Alamo appeared first on CounterPunch.org.