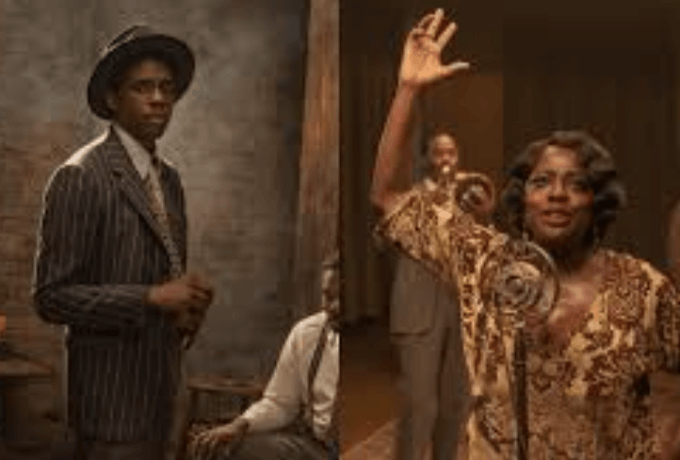 The Netflix film of the late August Wilson’s play Ma Rainey’s Black Bottom is a knockout. His writing informs and moves us on many levels. One is class. That is who makes and takes black music, the subject of Gerald Horne’s Jazz and Justice: Racism and the Political Economy of the Music (Monthly Review Press, 2019).

Wilson’s character-driven drama unfolds in a Chicago recording studio on a hot summer day in 1927. Blues singer Ma Rainey has traveled to the Windy City from the Jim Crow South, the former Confederacy. In that region under a big tent, all-black audiences flocked to see her sing the bawdy blues. Viola Davis nails the loud and proud singer’s attitude and body language. Rainey does not take any mess from her white agent and manager in Chicago after leaving her hometown of Columbus, Georgia.

“They don’t care about nothing but my voice,” Rainey laments. She knows the class, color and gender lines of the music business. Black artists lose the lion’s share of the wealth that their labor creates to white takers. There is no democracy at work until workers demand it. Rainey does that.

Director George C. Wolfe turns up the flame on Wilson’s portrait of white racism in the film. For example, we see the faces of Ma’s band members as Rainey’s white agent and manager call them boys repeatedly in the opening scenes. White aggressions, micro and macro, disfigure Wilson’s characters in ways big and small, and set the table for the Shakespearean drama inside the recording studio.

According to Wolfe, Wilson’s dialogue is musical in range and scope. For instance, the back-and-forth over personal and historical concerns and burdens between the band members zigs and zags, rises and falls, as they wait for Levee Green, the youngest of the quartet. The late Chadwick Boseman reaches out and grasps us as Levee, a talented and wounded soul who plays the trumpet on his terms, and is a vocal thorn in the sides of Ma and the other band members.

Glynn Turman plays Ma’s pianist Toledo. The character is bookish and shares his views on the history of black people before and after they arrived in North America. In the beginning of the play, Toledo clashes with Levee after he arrives late to the recording session. I saw the play in Ashland, Oregon years ago. In the film version and on stage, Wilson foreshadows Levee and Toledo’s tragic trajectory in a seamless way.

Colman Domingo plays Cutler, Ma’s guitar and trombone player. He is a conciliator among the band members and between them and Ma and her white agent and manager. Cutler believes in God and Levee begs to differ. Theirs is a clash of the sacred and the secular.

Michael Potts plays Slow Drag, Ma’s double bass player. In short, he is a stabilizing figure. Meanwhile, Slow Drag will hurl a putdown with a chuckle at another band member then take a sip of whiskey from a silver flask.

Taylour Paige plays Dussie Mae, a backup dancer who speaks with her body, and is Ma’s love interest. Paige, who I first saw in White Boy Rick, brings vitality to the role. She veers away from Ma and to the energetic and magnetic Levee. She asks him: “Why you so crazy?”

Levee does not care what Ma or anybody else needs or wants. Levee’s bravado masks deep wounds that propel his revealing and shocking monologue. Boseman is at the top of his game in this role.

You could watch Ma Rainey’s Black Bottom on stage then digitally, as I did, and revel in its ebbs and flows of black life and work, rural and urban, in the U.S. during the Roaring Twenties. Alternately, you could watch the film then see the play on stage. Either way, Wilson’s Ma Rainey’s Black Bottom captures its characters’ flaws and history’s cruelties, unforgettably.