Global warming is the biggest challenge of all time. It impacts every living species. However, the inherent dangers are very difficult to comprehend.  As such, people brush it off as one more issue in life that will somehow be handled, fixed, no worries, human ingenuity will prevail.

But, what if it’s not that simple?

Stuart Scott, executive producer of Facing Future.TV, which is part of United Planet Faith & Science Initiative (UPFSI.org) founded by Stuart, knows better than almost anybody that it’s not that simple.  He is one of the few, the exceptional, to cast aside a comfortable lifestyle to take on the biggest issue of the 21st century.

Along the way, Scott has racked up impressive achievements, one after another after another, bringing the climate issue directly to the heart and soul of the world’s leading religious leaders, as well as directly influencing scientific and political luminaries across the globe.

Of special note, in 2018 he introduced Greta Thunberg (aged 15) to COP24 (Conference of the Parties) in Poland. An overnight sensation, she enlightened the world to the dangers of climate change, especially the youth via her movement called #Fridays For Future. His early imprimatur of her courageous efforts in Sweden to influence parliament to tackle global warming literally brought her onto the world stage. 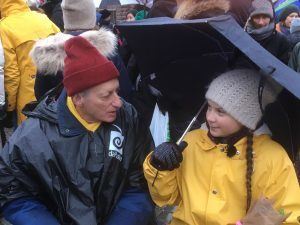 Scott does not adhere to the norms of mainstream life and culture, though he’s well known and respected within the scientific community as an extraordinarily powerful force behind the scenes, single-handedly moving mountains by initiating and powering ahead his personal crusade to inspire religious leaders of all faiths to pay heed to the forces of nature trapped in the iron clutches of rapacious ‘infinite growth economics’ within the Anthropogenic era, a remarkable geological age of humongous human footprints now consuming one-and-one-half Earths, likely not sustainable for much longer.

Stuart’s motivation runs deep, ever since his original commitment to Al Gore’s Oscar-winning “Inconvenient Truth.” He attended Gore’s training courses in 2007. Subsequently, he delivered over 100 presentations in public forums during his first year. In a February 2009 letter the former VP wrote: “I commend you for your work, which has contributed to the great increase of awareness and understanding of the climate crisis.” To this day, Stuart remains connected to Al Gore’s team. However, his posturing on climate change has deviated considerably to a much greater sense of urgency than Gore is willing to accept.

All of which served as a backgrounder, inspiring him to attend the climate summit COP14 in Poland in 2008. That exposure launched his trademark Interfaith Declaration on Climate Change of 2009 (InterfaithDeclaration.org) established to inspire and motivate religious leaders, in concert with scientists, to open doors for a thorough examination of the planet’s dangerously changing climate system, whilst pushing policymakers to find solutions, quickly, without hesitation. After all, ecosystems, especially where nobody lives to see it happening, were already showing early signs of collapse.

His work was enthusiastically embraced by religious leaders Dalai Lama and Archbishop Desmond Tutu, who, after hearing about Scott’s grandiose plans for betterment of the world, remarked, “I am going to need a clone of myself,” with so many commitments.

Soon after start of Scott’s campaign to blend faith with science in the fight against global warming, accolades arrived. Following his attendance at an intercessional meeting in Bangkok in April 2011, as a lead to COP17 in Durban, an international press release said of Stuart: “Man of All Faiths Fights for Climate,” Agence France-Presse (AFP) d/d April 8, 2011, highlighting his herculean efforts to change the course of humanity: “Scott, a 62-year-old American, who regards himself a man of all faiths, believes the forces of religion can make a positive impact on the tortuous diplomatic efforts to resolve the global warming crisis.”

Scott carried onwards and upwards to COP17 Durban, December 2011 where UN Climate Chief, Chistiana Figueres spoke of the remarkable selflessness of all those who worked to bring the Interfaith Declaration uniting people of all faiths to fight against the forces of global warming.

The UN World Council of Religious Leaders, the World Council of Churches, the Central Council of the Baha’i Faith, as well as secular organizations Greenpeace, McKibben’s 350.org and The Center for Biological Diversity endorsed Scott’s Interfaith Declaration.

The Holy See and Stuart Scott

Spiritualism and clairvoyance have always been at Scott’s side. Prior to delivering a very special message to Pope Benedict, he prayed at the foot of the cross in the Basilica of St. Clare that St. Francis famously said had spoken to him saying, “repair my church, which is falling in ruins.” Scott is neither Catholic nor Christian, but he nonetheless experienced murmurings of a series of serene ethereal voices, whispering encouragement, words that resonated within Stuart’s mind.  He silently asked for guidance on how he might succeed in personally delivering the handwritten message from Yvo deBoer, then Executive Secretary of the UNFCCC, inviting Pope Benedict to attend COP15 in Copenhagen. His prayer was answered by what Scott describes as ‘a clear but silent whisper’ of the words, “Do it the way I did it.”

He received a letter of introduction from a highly placed cleric as an invitation to a “Public Audience” with the Pope. Scott was able to pass along a cloth bag containing 300 personal messages by individuals from around the world, inviting the Pope to COP15 in Copenhagen, December 2009.

Thereafter, “pulpit power” became Scott’s motto. With determination and hope, he pressed the world’s religious leaders to intercede in the most pressing issue of all time, a dangerously accelerating climate system that society at large found difficult to fully understand.

Pope Benedict did not attend COP15 but did issue strong statements on the day preceding the conference. In December 2009, in celebration of the Roman Catholic Church’s “World Day of Peace,” the Pope, voicing Scott, said: “Mankind needs to rethink its way of life.” Called the “Green Pope,” he suggested “more sober lifestyles” with reduced energy consumption in favor of energy efficiency like solar and proper management of forests. Those closest to Stuart, and UN staffers, felt that he helped bring about the Pope’s words.

He attended 10 of the last 13 Conference of the Parties to the Kyoto Protocols (COPs), or world climate conferences, becoming a regular feature at the venues.  He conducted interviews and panel discussions for broadcasting purposes branded as ScientistsWarning.TV and ClimateMatters.TV under the banner of ScientistsWarning.org, which he founded in order to spread the word of an emerging climate emergency beyond anything humanity had ever encountered.

In 2016 Stuart met Pope Francis in person, which was a year after the release of the Pope’s major encyclical – Laudato Si (released June 18, 2015) a strongly worded diatribe on Climate and Justice. “Caring for Creation” is one of the seven tenants of Catholic orthodoxy.

Pope Francis, a trained chemist, in concert with his team of scientists, distinctly stated: “Climate change is the greatest threat to life our Earth has ever seen… and it is caused by humans.” He described relentless exploitation and destruction of the environment, for which he blamed apathy, the reckless pursuit of profits, excessive faith in technology and political shortsightedness.

On December 7, 2020 Scott received an email letter from Cardinal Peter Kodwo Appiah Turkson, named by Pope Francis as the first prefect of the Dicastery for the Promotion of Integral Human Development and widely regarded as “papabile,” meaning a candidate for election to the papacy. The cardinal’s letter to Scott stated: “I have read your mail and the urgent request to have the Pope participate in an interfaith event at Glasgow.”

On a personal note, the cardinal’s letter also referenced Scott’s battle with cancer: “…that it may help and contribute to healing.” Prayers for his recovery are ongoing at the Holy See.

The 2021 United Nation Climate Change Conference aka: COP26 is scheduled for November 1-12, 2021 in Glasgow, United Kingdom. At the meeting, Glasgow will likely be populated with 25,000–30,000 attendees from around the world.

Already, Cardinal Turkson has advised Scott that Pope Francis will likely send a pre-recorded message; hopefully, he can also attend.

Scott’s tireless efforts over twelve years of strategic work with the Holy See are coming to fruition more so than ever before via a request by Cardinal Turkson’s Dicastery for Mr. Scott to source an intern in Ecological Economics for the Holy See.

Ever faithful and deeply spiritual, Stuart Scott carries a small Saint Francis cross and regularly communicates via meditation and prayer with Archangels Michael and Raphael.

His widely endorsed Directive brings science and religious faith together, which propitiously led to an unexpected introduction to the dean of climate science, James Hansen, the world’s leading climate scientist and former director of NASA Goddard Institute for Space Science, meeting together by happenstance at a restaurant close to the Columbia University campus.

Dr. Hansen avoided attendance to climate negotiations and the Intergovernmental Panel on Climate Change for 20 years, until he met Stuart Scott, who convinced him that his criticism of the affairs would have more cache if, in fact, he attended the meetings, critiquing from one of the UNFCCC’s press conferences.

That chance meeting blossomed into their joining together for attendance at COP21 in Paris in 2015 at the landmark Paris climate accord agreed to by the nations of the world. At the end, Dr. Hansen dismissed the negotiations as “ineffective.” The conclusion was far too political, “a sham” in Hansen’s words. Nevertheless, Scott convinced him to attend future climate meetings in order to continue legitimately stating his position in opposition to politically motivated sham agreements.

Will Hansen appear at COP26? He has committed to attend if Stuart attends, which is uncertain because of Stuart’s cancer. At COP25 he had to be helped onto the stage in a wheelchair. The week prior he experienced chemotherapy treatment.

For the better part of two decades, Stuart Scott has interfaced with Buddhist monks, Catholic priests, bishops, cardinals, and Popes, Hindu Swamis, Sikh Granthi, Christian ministers and scientists to support efforts to save the world from humanity’s carelessness and ignorance, which, far and away, is the most potent adversary of the factual evidence as discovered by science.

Stuart has made the ultimate sacrifice. In that regard, he believes that the extreme levels of continuous stress associated with his work likely brought on his cancer. He has achieved major accomplishments all the while without outside financial support beyond his own dwindling lifetime savings.

Stuart Scott’s mission is an important one. It is serious work. It is tough work. It is thankless. Yet, he does it… the most challenging thankless work in the world.

Postscript: FacingFuture.TV recently announced the launch of a special event, which Stuart helped organize, on January 9th, 2021 in which the Dalai Lama and Greta Thunberg will join together with leading scientists to discuss five short films entitled Climate Emergency: Feedback Loops narrated by Richard Gere.

This article was posted on Monday, December 28th, 2020 at 10:50pm and is filed under Climate Change, Environment, Global Warming, Paris 2015, Pope Francis, Religion, The Vatican.