As armed supporters of outgoing US President Donald Trump forced their way into the United States Capitol last week on the day of the final electoral count, the irony of such scenes playing out in the seat of democracy was not lost on netizens of the Caribbean, where Haiti, to the north of the archipelago, was one of the countries Trump referred to as a “shithole” back in 2018.

However, the breach, which Senate minority leader Chuck Schumer said was carried out by “domestic terrorists,” did not achieve its intended goal.

Once the chaos was contained, the congressional session resumed and Joe Biden was confirmed as the next president of the United States — but discussion on the state of America’s democracy is raging on with moves to impeach Trumnp an unprecedented  second time.

The Black Lives Matter movement continues to have a great deal of resonance in the region. The disparity, therefore, between how white Trump supporters were treated and how Black Americans are regularly handled by police came into sharp focus.

Trinidadian Renee Cummings, a member of the diaspora living in the United States, said on Facebook:

Were these protesters Black we would be discussing dead bodies at the U.S. Capitol and not a breach of security.

This is the USA, not a 3rd world country?
If these were folks who looked like George Floyd it would have been another story.

Sharing the image of a tweet from rapper 50 Cent, which showed the National Guard stationed in front of the Lincoln Memorial during protests over the killing of George Floyd on June 2, 2020, Dionne Ligoure quipped:

Leaving this right here because I am SURE Facebook will suspend my account if I say anything further ….

I’m not sure I have ever seen such delusion, privilege and idiocy in one image.

And how much ya wanna bet he will just get to laugh about this with friends for the rest of his life? He’s unlikely to be shot and killed, and he knows it. It’s all over his face. https://t.co/F7mM5ypJRe

For Trinidadian musician Omari Ashby, who dubbed the event an “attempted coup”, the situation was clear:

America turns its ass to the world and spreads its racist plumage like some kind of nazi-esque peacock.
#shitholecountry

Making comparisons
Meanwhile, Jamaican social media users, who are very sensitive to the US government’s travel advisories that warn of crime and violence on the island, couldn’t resist gloating:

Travel Advisory #1
Jamaicans should avoid the Washington D.C area in light of the recent flare up in violence and what can be described as terrorist activities. If you have to traverse the area, please do so with the most extreme caution. pic.twitter.com/HYmdb0EJfV

Not everyone agreed with the happy comparisons, however:

I wish we could separate issues. When we say we are proud of Jamaica in comparison to what has been happening in the US, we are speaking of the usually smooth transfer of power. We are not saying Jamaica as a whole is some utopia, yes we have many other issues.

Twitter user Kerry-Ann Morgan was stunned that President Trump could not accept his loss:

Jamaicans where you all at?

Very proud to be a Jamaican?

We lose elections and we bawl and cuss how them tief yes but you would never see us behaving this way.

We rather say we sick and can’t attend the swearing-in?

Even Jamaican diaspora leaders called the storming of the Capitol “un-American.”

We note with deep concern today’s developments in Washington D.C. We continue to follow the events and trust that there will be a prompt return to normalcy in this important neighbour and #democracy in the Western Hemisphere.

However, the Chairman of the Caribbean Community (CARICOM), Trinidad and Tobago Prime Minister Keith Rowley, issued a more strongly worded statement on behalf of member states:

The Caribbean Community (CARICOM) is deeply saddened and concerned at the unprecedented scenes that unfolded at the Capitol Building in Washington DC, USA, during the certification of the votes of the presidential elections by the US Congress.

The storming of the US Congress was a gross affront to democracy and the rule of law in a country which has been viewed as a leading light of representative governance the world over.

CARICOM looks forward to the restoration of order and the continuation of the process of transfer of power in a peaceful manner.

Here come the memes
As expected, much of the Caribbean blogosphere responded with humour, though the underlying tone was definitely one of relish in seeing the mighty fall.

One Trinidadian Facebook user posted an image of one of the insurgents and added text that made his attire look like an advertisement for a costume with a popular Carnival band: 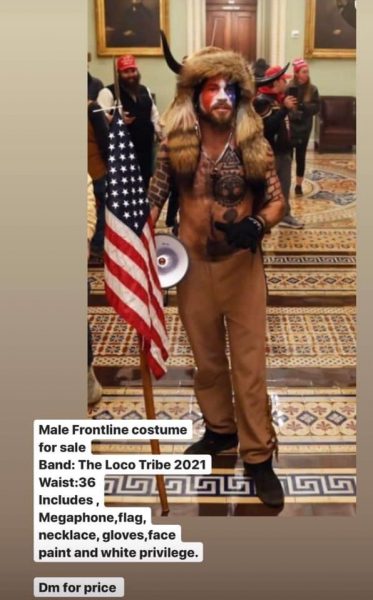 The Carnival-themed memes continued with a clever take on the hit soca song “Stage Gone Bad.” The image shows soca stars Kes and Iwer George singing the tune in the forecourt of the Capitol as Trump supporters scale its walls:

The popular soca song “Stage Gone Bad” was changed in a meme to “States Gone Bad.”

A mob of the MAGA persuasion
Conducted a statehouse invasion.
Though heavily armed,
They parted unharmed,
And that’s how you know they‘re Caucasian.

On WhatsApp, meanwhile, one widely shared image of the American flag — with a banana where the stars should be — said it all: 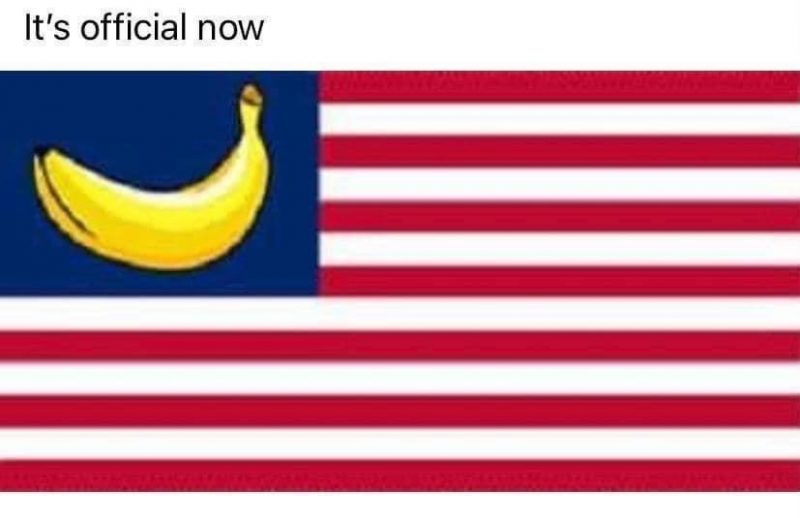 All jokes aside, however, regional netizens were well aware of the gravity of the situation, and how it has been allowed to build up, unchecked. Responding to the news that channels like Twitter and Facebook—which continued to allow Trump to have a voice throughout his presidency regardless of fact checking—had now blocked him, many social media users simply found the gesture a case of too little, too late.

Janine Mendes-Franco is regional editor, Caribbean, of Global Voices, and is based in Trinidad and Tobago. Emma Lewis is a writer, blogger and social media activist living in Kingston, Jamaica. This article was first published by Global Voices and is republished by Asia Pacific Report under a Creative Commons licence.