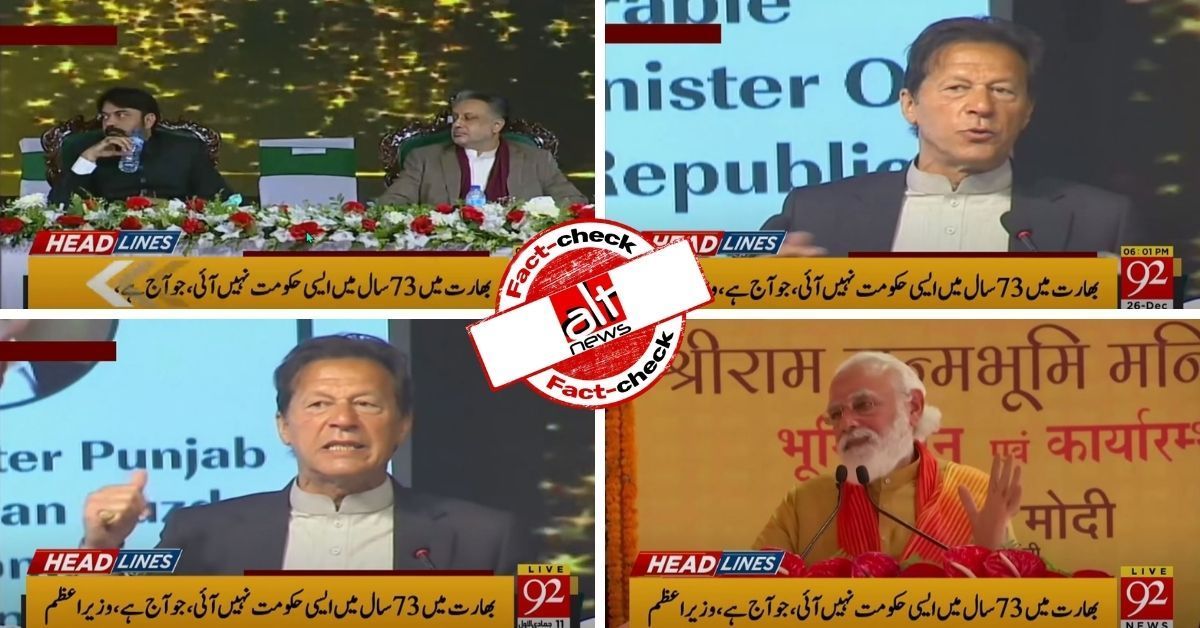 On January 10, Pakistani activist in exile Arif Aajakia tweeted a 26-second clip of Pakistan Prime Minister Imran Khan. The video begins abruptly and Khan can be heard saying, “If Pakistan needs a strong army, it is today. And why? Because of our counterpart… in 73 years… there hasn’t been a government like this.” Seconds later we hear a voiceover by a news presenter reiterating the same. The video carries the logo “92 Plus”.

Here he comes with a truth, its rare bcoz @ImranKhanPTI hardly spills truth..
1st time, there is a government in India that Pakistan fears, otherwise, there was always a friendly government in Bhaarat, that continued apeasement despite all terrorism from Pakistan in Bhaarat. pic.twitter.com/52OmUaJhkg

The next day, columnist Shefali Vaidya posted the same video and wrote, “You cannot have a more ringing endorsement of @narendramodi govt than this. Your sworn enemy publicly admitting that in 73 years India had never had a government as strong and iron-willed as this!” She also posted this on Facebook which gained over 1,400 reactions.

You cannot have a more ringing endorsement of @narendramodi govt than this. Your sworn enemy publicly admitting that in 73 years India had never had a government as strong and iron-willed as this! pic.twitter.com/ajRvG0y0mR

Alt News performed a keyword search “92 News” on YouTube and found Pakistan-based news channel 92 News HD. We rummaged the channel and found the news bulletin that includes the section shown in the viral video.

This bulletin gives only the headlines thus includes 20 seconds of Imran Khan’s full speech. However, the anchor provides context.

The viral video is clipped from 0:56 to 1:16. Listening to the clip beyond the 1:16 mark, we learnt that Khan was referring to EU DisinfoLab’s report on fake websites in India. The report showed how dead media, dead think-tanks and NGOs, and dead people were resurrected as part of a disinformation network. As per the report, this network is active in Brussels and Geneva producing and amplifying content to undermine Pakistan primarily.

On December 26, Khan delivered a speech in Chakwal. This was reported by multiple media outlets including 92 News HD.

From 5:57 minutes onward, he begins to say, “If Pakistan needs a strong army, it is today. And why? Because of our counterpart… in 73 years… there hasn’t been a government like this in India that is totalitarian, racist, anti-Muslim, anti-Islam, anti-Pakistan and the way it has treated Kashmir.” Thus it is clear that Khan wasn’t praising PM Modi.

Pakistani activist Arif Aajakia and columnist Shefali Vaidya posted a clip from a Pakistani news bulletin broadcast on December 26. This created a false impression that Khan was praising the Indian government. In reality, Khan termed the Indian state under the Modi government “totalitarian and anti-Muslim”.