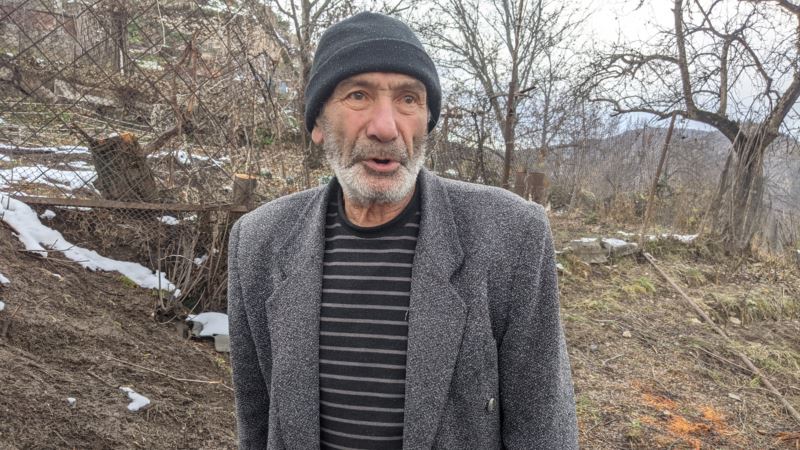 SYUNIK, Armenia — The ruined buildings are easy to miss if you’re not looking for them.

Degraded and dismantled, the slight remains of perhaps a dozen houses are clustered tightly between the river and the highway, about 10 kilometers south of the city of Goris, in southern Armenia.

But this is not Armenia. This is the village of Eyvazli, in Azerbaijan. And while there’s not much of it left, it now sits at the heart of the latest tensions between the two historical rivals and the uncertainties of the new border demarcation process here.

The southern Armenian province of Syunik, which hosts Goris, forms a tendril of land stretching down from central Armenia to border Iran. On both sides, it is flanked by Azerbaijan — the Azerbaijani exclave of Naxcivan to the west and the Azerbaijani provinces (rayons) of Qubadli and Zangilan to the east.

For the past 27 years, the latter border did not exist in reality. Qubadli and Zangilan were captured by Karabakh Armenian forces in 1993 and administered by Stepanakert until three months ago, when Azerbaijani forces retook them during a sweeping offensive.

A Russia-brokered cease-fire ended 44 days of fresh fighting in the long-simmering war over Azerbaijan’s territory of Nagorno-Karabakh and surrounding regions on November 10, enshrining Azerbaijani control over the two. Now, for the first time since the border between then-Soviet Armenia and Azerbaijan was drawn nearly a century ago, it is being officially demarcated.

A glance at the map makes the problem immediately evident.

The border — which was never meant to be international, but merely a near-meaningless divider between two Soviet provinces — zigzags haphazardly, cutting through settlements and key roads. The most important road in southern Armenia — the highway between Syunik’s two largest cities of Goris and Kapan — repeatedly crosses the official border, including at Eyvazli.

The unclear position of the actual border has already led to problems since the cease-fire cemented Azerbaijani control over much of the territory it lost nearly three decades ago, as local Armenian and Azerbaijani forces come face-to-face.

On December 13, reports emerged of a shoot-out between Armenian and Azerbaijani troops in a village near Syunik’s provincial capital, Kapan.

Speaking to RFE/RL the next day, Kapan’s mayor describes the incident as Armenian “defenders” merely firing into the air to warn off several dozen approaching Azerbaijani soldiers.

Parsian’s city is itself affected by the border issue, lying within sight of the newly manned Azerbaijani border.

“The last neighborhood of Kapan is less than 1 kilometer from the border,” Parsian says. “We already feel under threat because of this.”

Kapan Mayor Gevorg Parsian, an Armenian, thinks the war in the 1990s started because “we were living too close to each other.”

Kapan’s airport is even closer. Disused since Soviet times, it has repeatedly been rumored to be reopening. The landing strip has clearly been repaved recently, and the terminal building is also freshly built.

Barely 100 meters separates the tarmac from the river that marks the border.

“The Azeris are already there, on the other side of the river,” Parsian says. “The new airport should be a major asset for Kapan, but it hardly feels safe now.”

The new frontier especially concerns residents here, given Kapan’s history. Over the course of 1992, during the first years of the Nagorno-Karabakh conflict, the city was repeatedly shelled by Azerbaijani forces across the border.

Fallout from the border issue and the discomfiting truce that capped the recent fighting have turned Syunik — or at least its mayors — into staunch critics of Armenian Prime Minister Nikol Pashinian.

The mayors of Syunik’s five largest settlements — Kapan, Goris, Sisian, Meghri, and Kajaran — have all called for Pashinian’s resignation. During a planned visit to Syunik on December 21, local residents blocked the roads, forcing the prime minister’s entourage back to Yerevan.

Parsian, who has been one of Pashinian’s most strident critics, pins the blame for the recent defeat on the Armenian leader, who took power after leading street protests that fueled a “velvet revolution” in 2018.

“The war is connected with [Pashinian’s] failed policies — specifically, his foreign policy,” Parsian says, adding, “The support we have from the government [on the border issue] is also not enough.”

Their disappointment has led Kapan and other communities to seek the help of another protector: Russia.

In late November, Moscow announced that in addition to some 2,000 Russian troops already policing the cease-fire, it was sending 188 border guards to Armenia to help secure that country’s southeast border. Some of them are already on the ground around the Kapan-Goris highway.

“We are in contact with the Russians,” Parsian says. “They have promised us to maintain security.”

The partly destroyed home of Vorlik, a 72-year-old resident of Davit Bek, in Armenia, near the border with Azerbaijan.

Meanwhile, in another of Syunik’s villages, the border situation is equally tense and the direct effects of the recent fighting are still being felt.

Seventy-three-year-old Vorik, who asks that his last name not be published, points to a destroyed shed next to his house in Davit Bek.

It is about 5 kilometers as the crow flies from the Azeri town of Qubadli (Kubatli in Armenian), near the mutual border.

“They fired a shell that landed right here,” he says of his property coming under Azerbaijani artillery fire. “Many other houses in the village were also hit.”

A detachment of Armenian Army troops is present in the village, billeted in a house in its center. They arrived in early December, after having fought on the front lines in Cebrayil/Jrakan.

“The enemy is about a kilometer and a half from here,” an Armenian soldier, speaking on condition of anonymity, says as he gestures toward several small tents across a field that marks the border with Azerbaijan.

Unlike Syunik’s mayors, these men have no harsh words for the prime minister.

“This deal saved our friends,” the unit commander says when asked about the cease-fire agreement. “We fought the war in order for our people to live. Thank God, most of them still do.”

While major combat is over — at least for a while — the border demarcation has led to further losses and more uncertainty.

On January 4, a dozen homes in the village of Shurnukh, about 10 kilometers northwest of Davit Bek, were handed over after being found to lie on the Azerbaijani side of the newly defined border.

But not before they were set alight in scenes reminiscent of evacuations in Kelbacar/Karvachar and other parts of Nagorno-Karabakh that were ceded by other ethnic Armenians more than a month earlier.

For Mayor Parsian, the newly arriving Azerbaijanis on the border are an ominous sign, even if Russian border guards will also be coming.

“The war in the 1990s started because we were living too close to each other,” he says. “There were kidnappings, raids — that’s how it all started. If [Azeris] are again right next to us, I fear the situation will be repeated.”