I can’t mention her name, because she is a child. Twelve at the time, she was too young to legally work, but not too young to be forced to be a parent. She was a student of mine, and I remember, just a few years ago, playing the bridge game with her. She laughed with endless delight as I held her feet, and another teacher held her hands, and we spun her around.

After she was raped – the man attacking her in broad daylight as she walked down the street of her barrio – Vannesa Rosales-Gautier, a fellow teacher and a women’s rights defender in Merida Venezuela, helped her end the consequent pregnancy. While the rapist is still free, Rosales was sent to prison.

On 12 October last year, security agents raided her home and arrested her. She is being accused of assisting a third party with an abortion without their consent, and of criminal association, due to her activism. Her case hasn’t yet been tried (in violation of due process) and the extra charges on top of assisting an abortion mean she could be facing 25 years in prison. The single mother of the child, was also imprisoned for a period, meaning the fetus took precedence over her caring for her eight children.

Forcing any person to carry out a pregnancy robs them of agency over their life. The child’s future and the big or small things she hoped to do with it, would have been taken away, and her ability to self realize – to exist completely as herself, would have been lost.

Whether our bodies are being used as advertising adornments or as trophies for the imperialist hero in the movie who kills all the baddies, it is made clear to us from an early age that our faces and bodies are more important than our active role in society. But life is animacy, movement, change, and agency, so denying our right to decide about our future is denying our right to be lively, bold, joyful, thinking beings.

Agency means we are the initiators of our actions. Without that, we are controlled, subdued, and oppressed by others. Similar to autonomy (the ability to make informed and non-coerced decisions under conditions of political independence and freedom), agency doesn’t mean doing whatever we want. In fact, it means being aware of, and responsible for our actions, while having the necessary information and resources to carry them out.

Recently, I was observing five eagles tied to rocks or posts in a bird park in Xalapa. You could see how angry they were at not being able to fly, and at being unable to respond to the people putting their phones close to their faces to take photos. Animals don’t like being denied power over their actions either.

Without our agency we can become bitter, numb, and stalled. It is a precondition for a reasonable existence. Our own legs are tied, and our adventurous minds are limited. Freedom isn’t actually about being able to choose between 50 types of chips. It is being able to achieve your individual and collective potential. It is constant learning and growth, purpose, planning ahead, and making considered choices. When we can’t get birth control pills over the counter or we are lectured on the morality of abortion, we are treated as very tiny children because our intelligence and life experience are being denied. 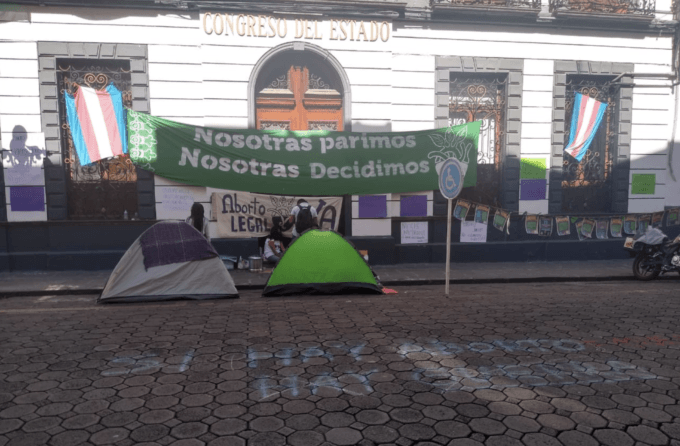 Our place in the world is reduced

This state of submission – of women, trans and non-binary people being tied down with metaphorical rope to the house, unable to fly – is normalized.

I was recently told by a man, brazenly (as though it was a perfectly reasonable thing to say), that women who got abortions deserved the death penalty. His comment demonstrated how little regard there is for us. Here in Mexico, there were almost 1,000 officially recognized femicides last year alone. Part of that is the almost total impunity for the perpetrators, but a bigger part is structural politico-social messaging that our presence is inconsequential.

In Puebla, where I live, abortion is illegal. If I needed one, medical, mental health, and legal professionals would likely judge me, and none of them would ask me what I need. What does it take to create a world where it is common for people to ask women what we need?

Ultimately, we know that it isn’t the fetus anti-abortionists are concerned about. After years of peaceful and regular protests around Latin America with no results, and of governments refusing to take women’s demands seriously (Mexico’s president, Andres Manuel Lopez Obrador, has told feminists to organize a public consultation to get abortion rights, and insists most domestic violence calls are false) women have now taken to grafittiing walls, police cars and statues, and even occupying state congresses and human rights commission buildings.

In response, many men called these actions “violent,” but they were quiet when Cancun police fired on feminist marchers. That showed that what these people really don’t like is when women stop being idealized objects of beauty and pawns with pretty smiles, and instead become outspoken, bold, and heard in the streets.

A sea of green bandanas in Latin America

While Argentina just legalized abortion rights, and Cuba, Guyana and Uruguay allow it, it is prohibited or limited in the rest of Latin America. In Mexico, only Mexico City and Oaxaca state allow it, but even in Mexico City doctors often refuse to perform abortions, set up bureaucratic obstacles or try to guilt women out of getting them.

In El Salvador, the law punishes abortion with two to eight years in prison, but there have been cases where women received 40 years, as the procedure was considered a homicide.

And Brazil caught people’s attention recently after a 10-year-old who had been repeatedly raped faced religious fanatics and anti-abortionists protesting outside the hospital to stop her getting an abortion. Doctors also refused, forcing her to travel to a different state.

But the authorities’ stance on abortion in Latin America isn’t about a controversial medical procedure. There are plenty more of those in the healthcare world. The church, brought to the region by the European invaders, has a heavy influence on how women and reproduction are perceived and treated, and sexism and inequality run deep. Further, the region has been harshly and consistently deprived of agency and autonomy, with the United States dictating trade terms and local economic measures, helping to install dictators, supporting coups, funding contras, and more. Political autonomy is in short supply here, and it isn’t as taken for granted as a right as it sometimes is elsewhere.

However, the movement for abortion rights and for the right to live without violence has been intensifying over the past year, despite the pandemic. There have been huge demonstrations around the continent, particularly in Argentina, and feminists in Mexico have drawn strength from these. In March, there was an effective nation-wide women’s strike calling for an end to femicides and violence. Green bandanas or scarves are now a well-known statement around the continent for legal, safe, and free abortion.

The right to thrive

In much of Latin America, as well as in other parts of the world, working to the point of exhaustion is the norm. Life is acceptable if you have a roof over your head and some kind of unreliable access to health care. The normal order of the day is most people fighting for crumbs while the super rich decide everything, thoughtless garbage broadcast on television and an unsupportive world diminishing oppressed groups and consistently hurling out abuse and violence of varying shades. The bar is low.

So it takes a courage of imagination to believe we deserve to thrive. For women, having grown up with media that dehumanizes us, with gender roles, then workplace abuse, rape, and more, it can be hard for us to believe we are entitled to dream of an exciting, adventurous, and joyful future – that may, or may not involve children.

Imagine a world built for us to thrive in rather than barely survive in; where child rearing is a societal responsibility rather than something that individuals or couples struggle to get through. And where babies grow up to be largely happy and healthy humans because their parent or parents weren’t forced to have them against their will, and because their parents got the sort of financial, educational, psychological, legal, workplace, and professional support and collaboration that they needed.

Maybe if we were able to have complete agency and autonomy over our individual and collective lives, our self esteems would be stronger, love would be less broken, and we’d all get better at making good decisions.

Rosales told me from prison that women there had “built some strong and authentic connections,” and that she wasn’t the only victim of inflated charges. She emphasized that women’s rights aren’t something that could be declared “with publicity and cosmetic changes to laws.” Thanks to a strong Latin America-wide campaign, she was able to go home on Monday, though the charges against her remain. And as Chile’s congress is about to debate decriminalizing abortion, it is clear that this is a battle that will continue.