It seems a long time ago – some 124 days – since Mā’ohi Nui deplored its first covid-19 related deaths of an elderly woman on 11 September 2020 followed by her husband just hours later, both over the age of 80.

The local territorial government was indeed saddened about the loss and sent its condolences to the grieving family and relatives.

The opening of Mā’ohi Nui’s borders two months earlier on July 15 by the French High Commissioner, Dominique Sorain, in consultation with Tahiti’s President Edouard Fritch – who promptly agreed due to economic reasons – has led to today’s covid-19 pandemic crisis.

About 17,500 vaccine doses were available last week on January 7 for more than 8000 people but, unfortunately, one expects more deaths before the injection programme is rolled out.

These are sobering figures when entering January 2021 on the Gregorian calendar – and equally the Tahitian chart speaks of the Pleiades constellation, or Matari’i i Ni’a, foretelling abundance that extends from November to May.

Sadly, for the mourning families the only season of abundance appears to be the losses of the most vulnerable in our society – our elders.

It is also quite revealing that information about covid-19 cases are on a drip-feed from the Ministry of Health, with its minister doctor Jacques Raynal comparing covid-19 from the beginning to a mere flu.

And sometimes he was at pains to explain the differences between “cured” and “convalescing” patients.

It is clear that the local government, along with the highest representative of the French government, were unprepared and remained ill-equipped with this pandemic, a déjà-vu situation.

The spectre of Jacques Chirac and nuclear past
The most populated islands of the Society archipelago (Tahiti and Moorea) have been under curfew from December 14 to January 15, 2021, and that might be extended.

The only hospital centre of French Polynesia is at Ta’aone in Tahiti and that caters for the covid-19 patients. It has done so to the best of the hospital staff’s abilities. The same hospital complex is now at the centre of another dispute between pro-independent member of the Parliament Eliane Tevahitua and Health Minister Raynal, who sent an open invitation to the members of the hospital board (Tevahitua being a member), confirming in a ministerial letter that the name of the hospital would become Jacques Chirac, named after the late former French president.

For good measure, the family of President Chirac gave their approval and are honoured by such a gesture.

It is believed that the trade-off is that the Jacques Chirac Square in the capital Pape’ete (a name given to it by former Tahitian president Gaston Flosse) will be renamed “Tahua Tumarama” which in the indigenous language Mā’ohi means the “stage of rising light” (resembling the aftermath of a nuclear bomb).

The naming of the Chirac square was more than 20 years ago, which was in itself very controversial at the time, due to the fact that a plaque was erected not far from that very square to commemorate the people who had died (and are still dying) from the 30-year French nuclear testing programme started on 2 July 1966.

President Chirac resumed the suspended nuclear testing from September 1995 to May 1996.

Some historical information about the Jacques Chirac hospital complex should be shared. It was a former military base reserved for French military personal and kitted with bungalows.

The hospital opened in 1966 for the Centre of Experimentation of the Pacific (CEP) where the majority of French military were based before or after their missions to Fangataufa, Hao, Mangareva and Moruroa.

As children, we used to enjoy Ta’aone since the maritime military base gave onto a beautiful beach where we sunbathed and surfed, a popular place with the local population.

Those memories seem to send us back to the nuclear testing period some two generations ago and it might be fitting that such a hospital complex should carry the name of one of the French presidents.

What is more telling – or unfortunate – is the fact that the name Jacques Chirac appears to carry the signs of death whether related to the square next to the monument dedicated to those who died from the nuclear testing, or to this new hospital where people are being cared for but where unfortunately 124 people have so far died from covid-19, and many more from diseases related to nuclear fallout. 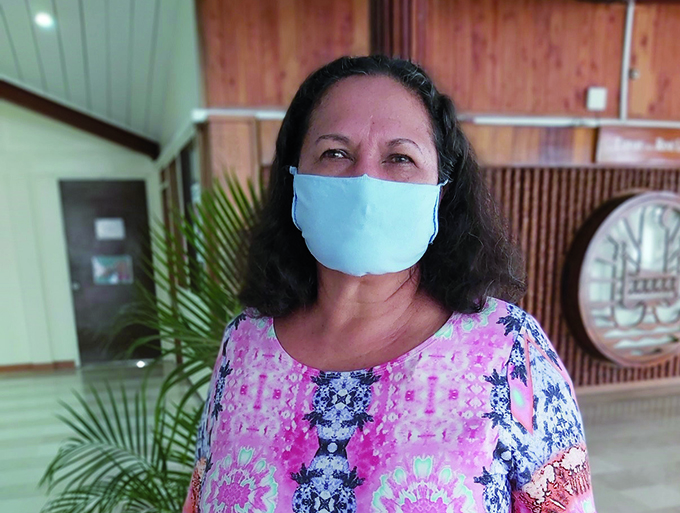 The reply of independent parliamentarian and Oscar Temaru
Back to the request of joining the local government in naming the hospital, pro-independence parliamentarian Tevahitua’s response to such an invitation did not fail to tell the health minister and the local government of the independent party Tavini Huira’atira’s (and her) “deep disappointment and disapproval” of such a neo-colonialist stand “to the detriment of the indigenous Polynesian people”.

“While the Mā’ohi people are trying to regain their own history and at a time when your government is promoting the use of the Mā’ohi languages in public space, it would have been more judicious to name the hospital Tiurai, an indigenous traditional tahu’a (doctor) who dedicated his life to caring and healing people’s pain for free”.

Ironically, Tiurai died from the Spanish flu pandemic in 1918.

In the same vein through my latest communication with Oscar Temaru, the leader of the independence party Tavini Huira’atira, has shown how his approach to local toponymy favoured illustrious and respected Mā’ohi figures who deserved to be honoured by the people, instead of the name of some coloniser.

While at the helm of the country as president (on and off from 2004 to 2009), Temaru changed the name of one of the most important avenues of the capital Pape’ete from Avenue Bruat (the first French governor) to Avenue Pouvana’a a O’opa after the famous indeopendence leader. A judicious political move as this historical avenue is considered to be the heart of the political and administrative arena.

This was a move that evidently did not please the French authorities, although naming rights is a competence held by the local government.

Not without irony
It is not without some irony that Temaru declared that there are some Tahitian politicians who are more French than the French and who reluctantly adhered to the new name.

According to Temaru, it is more “the mentality of our own people that he has been trying to change from the very beginning of his struggle against the French colonial power”.

Unfortunately, today a pro-France local government has turned the clock back and are perpetuating the neo-colonialism agenda.

It would have been more appropriate to maintain the original name of the hospital as Ta’aone, which means the rolling of the sand.

Most of the hospitals in Pape’ete and its neighbouring districts carry a colonial name (Chirac, Prince, Malardé and Cardella) apart, from a psychiatric hospital with an indigenous name of Vaiami and a clinic called Paofai.

It might give us an idea of how we, the indigenous people are been perceived and how, while we name buildings by their geographical location, colonisers are obsessed with seeing names of illustrious figures on temporary edifices in an effort to give them permanence and relevancy.

Ena Manuireva is a Mangarevian originally from the south of “French” Polynesia who has lived in New Zealand for many years and is currently a doctoral studies candidate in Te Ara Poutama at Auckland University of Technology. He writes frequently for Asia Pacific Report.