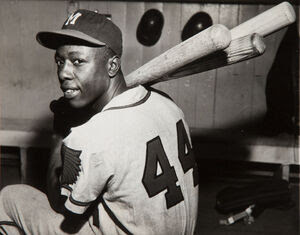 “My motto was always to keep swinging. Whether I was in a slump or feeling badly or having trouble off the field, the only thing to do was keep swinging.”

My father, a rabid St. Louis Cardinals fan, listened to virtually all their ball games on the radio from our home in Peoria, Illinois. Occasionally, we would drive the three hours to St. Louis to see the Cardinals play in person.

On one of those trips, the Milwaukee Braves were playing the Cardinals. That day, I arrived at the park a Cardinals fan, like my Dad. By the time I left the park, however, I had been converted into a Hank Aaron and Eddie Mathews fan.

It wasn’t so much the game itself that dazzled me, though. It was the Braves’ pre-game batting practice: one pitch after another, I watched as Aaron and his teammate Mathews smashed their balls over the fences. I had never seen ballplayers hit the ball so hard, and I haven’t since. Together, Aaron and Mathews hit the most home runs as teammates, for a combined total 863. Long after Mathews started to slow down, Hank kept smashing baseball records.

Yet no feat would match Aaron’s historic assault on Babe Ruth’s career record of 714 homeruns.

It was a watershed moment for sports history and the making of a civil rights icon.

Henry Louis Aaron, who died at the age of 86, was born on Feb. 5, 1934, in Mobile, Alabama. He came of age in a nation struggling with segregation, racism and the distant, yet-unrealized dream of a world in which “black men as well as white men, would be guaranteed the ‘unalienable Rights’ of ‘Life, Liberty and the pursuit of Happiness.’”

From his early years spent swinging at bottle caps with a broomstick, Hank went on to play semiprofessional baseball. In 1952, he quit high school to join the Indianapolis Clowns of the Negro American League. His talent was apparent to the baseball scouts. In fact, after a brief stay as the Clowns’ shortstop, Hank was sold to the Braves for $10,000. After excelling in the Braves’ farm system for several years, Aaron joined the Braves in Milwaukee.

The year was 1954, and it didn’t look like the 20-year-old Aaron would make the team. But then one of the starting outfielders broke an ankle, and Hank was tapped to replace him. From there, Aaron never looked back.

In 1957, Aaron hit a National League-leading 44 home runs, while driving in 132 runs batted in and batting .322. To cap off the season, he hit an 11th inning homer late in the season to clinch the pennant for the Braves. Aaron won the MVP that year, and the Braves went on to win the World Series.

Year after year, Aaron proved his hitting and fielding prowess. And although he was 6 feet tall, he was never a heavy man and only reached 190 pounds. The key to Aaron’s hitting was his supple, powerful wrists that allowed him to crack his bat like a buggy whip. Aaron credits hauling ice as a 16-year-old for developing his wrists, working from 6 a.m. to 1 p.m. for $2.25 a day.

Maybe it was Hank’s laid-back style that allowed him to creep up on Babe Ruth’s homerun record before anyone realized it. One observer remarked that Hank seemed to be looking for a place to sit down when he approached the batter’s box. The Hall of Fame pitcher Robin Roberts once remarked that Aaron was the only batter he knew who “could fall asleep between pitches and still wake up in time to hit the next one.”

Nevertheless, the chase to beat Babe Ruth’s home run record heated up in the summer of 1973. Unfortunately, so did the hate that simmered beneath society’s surface. Much of it came by way of the mailman, with Aaron receiving an estimated 3,000 letters a day, more than any American outside of politics.

Much of it was hate mail, more hateful and threatening than Aaron had ever imagined. “If you come close to Babe Ruth’s 714 homers,” one letter said, “I have a contract out on you. Over 700, and you can consider yourself punctured with a .22 shell.” Another read, “Dear Nigger Henry, You are (not) going to break the record established by the great Babe Ruth if I can help it. Whites are far more superior than jungle bunnies. My gun is watching your every black move.”

“The Ruth chase should have been the greatest period of my life, and it was the worst,” Mr. Aaron wrote in his autobiography, I Had a Hammer. “I couldn’t believe there was so much hatred in people. It’s something I’m still trying to get over, and maybe I never will.”

In his first at bat in 1974, Aaron scored a home run, tying Ruth. Then on April 8, 1974, the largest crowd in Atlanta Braves history came out to witness the historic moment. Hank didn’t disappoint them.

With a mean whip of the bat, his first swing of the evening, Aaron sent the ball into the Braves bullpen in left center field, approximately 400 feet from home plate. The large message board blared “715.”

Just like that, Hank Aaron had eclipsed the Great Bambino to become the Homerun King.

When Aaron rounded third, he broke into a wide grin at the sight of his teammates waiting for him at the plate. With tears in his eyes, Aaron was met at home plate by his mother. Fireworks went off, as the crowd roared for ten minutes.

“I just thank God it’s all over,” said Aaron. He had endured months in the fishbowl of media coverage, death threats and hate mail.

For all of his achievements, nothing equaled that night in April 1974 when Hammerin’ Hank stepped past Babe Ruth and racial hatred into history.

As MLB Commissioner Rob Manfred stated, “Hank symbolized the very best of our game, and his all-around excellence provided Americans and fans across the world with an example to which to aspire. His career demonstrates that a person who goes to work with humility every day can hammer his way into history—and find a way to shine like no other.”

This article was posted on Friday, January 22nd, 2021 at 4:16pm and is filed under Obituary, Racism, Social Justice, Sports.