Five journalists said federal law enforcement officers targeted them with crowd control weapons while they were covering protests in Portland, Oregon, in the early hours of July 21, 2020.

Jonathan House, a photo editor and photographer for Pamplin Media Group and the Portland Tribune, said he was shot with an impact munition. Four independent journalists were also targeted, with Mike Bivins getting sprayed with a chemical irritant, Rach Wilde getting targeted with baton rounds and pepper balls, Eric Greatwood getting hit with less-lethal munitions, and Mathieu Lewis-Rolland getting targeted with pepper balls and a tear gas grenade, they said.

The journalists were covering one of the many protests that broke out in response to police violence and in support of the Black Lives Matter movement following the May 25 death of George Floyd. The U.S. Press Freedom Tracker is documenting assaults, arrests and other incidents involving journalists covering protests across the country.

The Portland protests, held nightly since late May, had grown more intense as the presence of federal law enforcement increased in early July. A temporary restraining order on July 2 that barred the Portland police from harming or impeding journalists wasn’t expanded to include federal agents until July 23.

Demonstrations that began the night of July 20 stretched into the early hours of the next day, according to the Oregonian, as the “Wall of Moms” and other protesters confronted federal officers stationed at the Mark O. Hatfield federal courthouse and the Multnomah County Justice Center downtown.

Around 12:30 a.m., as protesters tried to pry protective plywood off the courthouse, federal agents emerged from the building to confront the crowd. Around that time, Bivins was documenting federal agents yelling at protesters to disperse and pushing people back when he got pepper sprayed in the eyes, he told the Tracker.

In a video Bivins shared with the Tracker, a federal agent is seen rushing up to him and yelling, “Get out, now!” Then the video goes askew as the agent sprays Bivins.

“I could feel it all on the side of my head,” Bivins told the Tracker. “I thought my skin was going to fall off.” While Bivins was wearing protective glasses, he said that within a minute after getting sprayed, he could no longer see out of his left eye. Several protesters led him away and provided him with assistance. 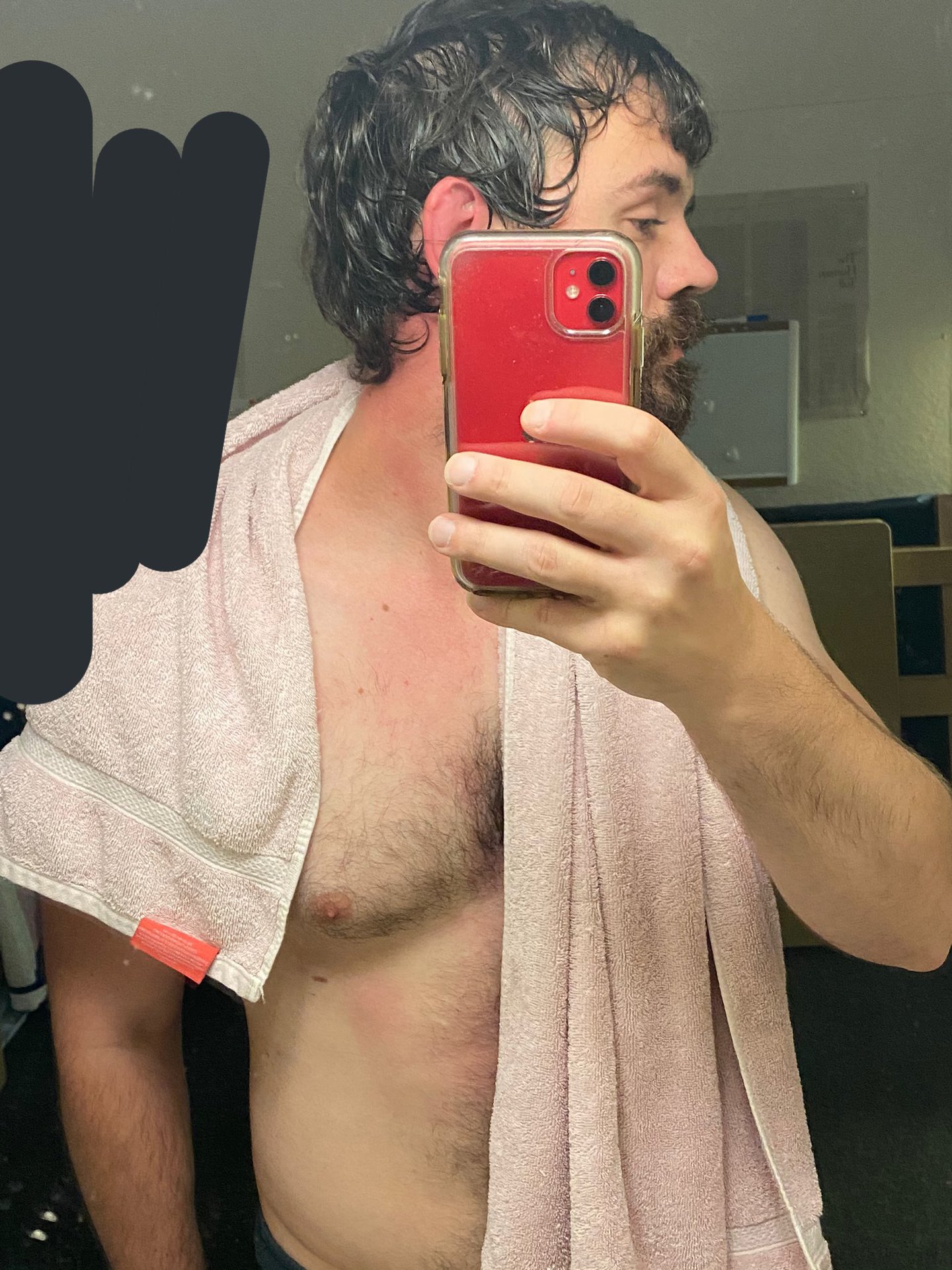 Independent journalist Mike Bivins shared an image with the Tracker where rashes from the pepper spray are visible on his chest and neck. The chemicals also ruined his clothes, Bivins said.

Bivins had a press identification from the local news outlet Village Portland hanging around his neck and visible to the officers, he said.

Bivins said he plans to sue the Department of Homeland Security for $1 million over the incident. His attorney, Michael Fuller, sent the agency a notice of intent to sue on his behalf in November.

Around the same time, Wilde was covering events across the street from the Justice Center when federal officers rushed the crowd and targeted her with baton rounds and pepper balls, she told the Tracker.

“We were filming this rush, and they were shooting whoever and whenever they wanted,” she said. Wilde had been filming officers who were “aggressively either detaining or arresting” a protester when “one of them looked straight at me, pointed his weapon at my body and hit my ankle with a baton round.” She wore press identification issued by Black Zebra Production, an independent media organization, around her neck.

“They continued to shoot at me [with pepper balls] as I was literally hopping away,” Wilde told the Tracker. “I had little marks on my backpack from when they shot at me.”

Wilde, who had previous experience as a street medic, said she regrouped behind a car and continued to document throughout the night.

Afterwards, Wilde went to the hospital for an X-ray and learned that she had a “very deep bone bruise and possible hairline fracture.” She said she is unable to walk for prolonged periods of time and feels like she is “spraining it all over again” if her ankle is hit a certain way. She said she plans to return to the hospital for another X-ray soon.

Meanwhile, House was filming from across the street from the courthouse and Justice Center when he was shot in the arm. A video that House posted on Twitter at 12:34 a.m. shows a fire in the plaza on Southwest Main Street where an elk statue used to stand. About 29 seconds into the video, the frame wobbles as House is hit. “Federal agents moved in to clear the crowd. My arm got shot with an impact munition as I was taking this video (near the end),” House tweeted.

House said he believes he was targeted. "This felt like the first time that I was specifically targeted," he told the Portland Tribune. "That rubber bullet was six inches from putting me into the hospital."

House told the Tracker that he was wearing a bright blue climbing helmet marked “press,” as well as identification on his backpack and a large press pass.

“I understand that you shoot tear gas out and it just takes up whole city blocks, especially if it’s windy,” he said. “But it seems particularly egregious if I’m kind of just standing there and I’ve got both my hands up while I’m filming something, and then one shot is literally coming right at me and hitting me.”

Shortly after, Greatwood was hit twice with less-lethal munitions as he walked away from a line of federal agents. Greatwood had been livestreaming the protests with a camera attached on top of a 20-foot pole when federal agents in camouflage advanced down Southwest Main Street, shooting munitions.

Greatwood’s livestream shows munitions flying through the air, capturing the moment that he was hit the first time, around the 4:57:30 mark. “That one hurt,” he can be heard saying.

About 20 seconds later, the footage captures the moment Greatwood was struck again, this time in the buttocks. The pain was much worse this time, Greatwood told the Tracker, and can be heard moaning in the video. He left the protest shortly after due to the pain.

After retreating, federal agents emerged again after 2 a.m. to use crowd control munitions to disperse the smaller group of protesters that remained at the courthouse, according to the Oregonian. Around that time, agents shot pepper balls at Lewis-Rolland and threw a tear gas grenade in his direction, he said.

In footage of the incident that Lewis-Rolland provided the Tracker, he can be heard saying,

“This is what makes me nervous, when there’s all this smoke and they don’t know who is who.” Seconds later, federal officers begin to fire in his direction and he moves behind a tree.

“I have my hands in the air, I’m marked as press, I’m being fired upon,” Lewis-Rolland can be heard saying as he backs away. Then one officer advances towards him and tosses a tear gas grenade in his direction.

Lewis-Rolland’s helmet, T-shirt and backpack were all marked “press,” according to an interview he did with Buzzfeed. He also said he wrapped his Nikon camera in fluorescent tape so that officers don’t mistake it for a weapon.

Lewis-Rolland told Buzzfeed that officers were pointing their weapons at protesters and press alike that night. "I saw them pointing them at everybody and anyone, including me," he said, adding, “Last night was the most horrifying thing I have ever experienced in my life.”

Lewis-Rolland, a defendant in the ACLU class action suit, provided testimony about an incident earlier in July in which he was injured by munitions fired by federal agents.

DHS, which has coordinated the federal presence in Portland, said in a statement that officers used pepper balls and tear gas to respond to an “assault” against the courthouse and law enforcement officers by rioters. The agency didn’t respond to a request for comment on the incidents.

The Portland police said in a statement that its officers weren’t present and didn’t engage with protesters that evening.