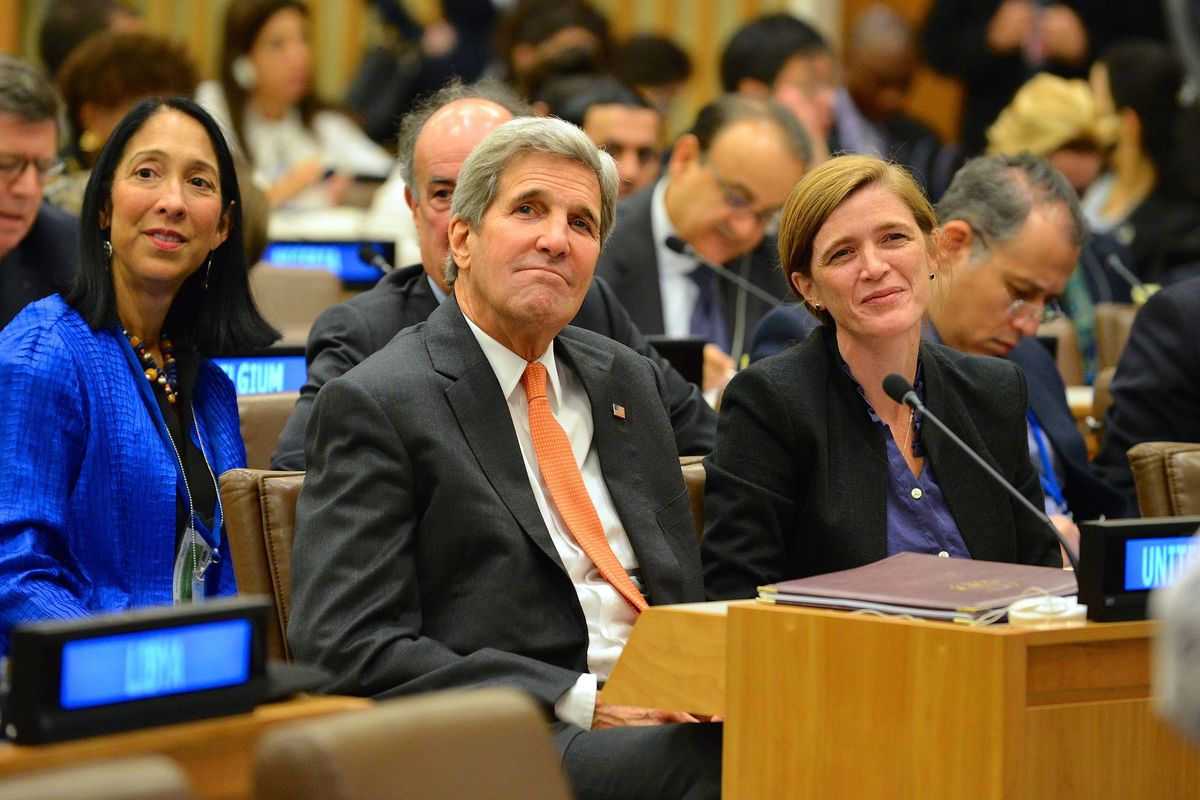 For all its faults, USAID – the US Agency for International Development – will be one of the most vitally important agencies of the Biden administration.  The confluence of Covid-19, global warming, famines in the Horn of Africa, forced migration and a series of unending proxy wars in the Middle East is a perfect storm that might spell the deaths of millions. All these problems are intrinsically interlinked, and can only be addressed through massive investments in global public initiatives.

For the past decades, the global community has worked towards stamping out HIV/Aids, Ebola, malaria and various other scourges of the “bottom billion.” There have been some immense successes in this historical task, such as eradicating wild polio in Africa last year, which Dr. Matshidiso Moeti – the World Health Organization (WHO) regional director for Africa – appropriately described as a “momentous, massive undertaking, with amazing persistence and perseverance, coming in the face of moments when we thought we were just about there, then we’d have a reversal.”[i]

Similar efforts, which have saved millions of lives,[ii] are often successful because locals – such as “traditional” leaders and healers, as well as mosques and churches – make global policies designed in Geneva or Washington fit to the local context. Against this backdrop, Trump’s plan to defund the WHO – which had already run on a shoestring budget, comparable to that of one well-resourced hospital in a western country[iii] – conveys the sense that the rich world has given up on the historical tasks of ending deadly diseases.

Donald Trump – with his obvious disdain for black and brown people – has done what he could to not only defund the WHO, but also, of course, UNWRA, the UN agency that provides aid to Palestinians, and attempted to slush funds for the already austerity-plagued USAID budget, chip away more of its responsibilities to the private sector, and integrate the agency’s work into Jared Kushner’s vanity “peace” projects. The Biden administration, on the other hand, has started with a promise to channel more energies and funds into aid. But the recent appointment of Samantha Powers – who, quite tellingly and ironically, received the Henry Kissinger Prize from the American Academy in Berlin – to head USAID is a bad harbinger for the Biden aid agenda.

Of course, one might argue that since USAID has in the past been used as a pawn to further US empire, Powers would be an appropriate appointee for USAID, as her tenure would reflect the agency’s imperial essence.  In regards to being complicit with participating in geopolitical schemes, USAID is probably guiltier than many other national aid-agencies, such as those representing Scandinavian governments. However, the left and progressives should not entirely dismiss the agency. If the policy-instrument of foreign aid should play any role in creating the imperfect and incipient structures of something resembling a global welfare state, the aid agency of the richest nation in the world’s history would have to be a part of such undertakings. What happens at AID matters for the world.

Powers’ spurious track-record, and what it might mean for USAID

One of the nicer comments one might make about Powers’ track-record is that she cannot distinguish between sins of commission and omission when it comes to serious human rights abuses. The former refers to facilitating or carrying out atrocities, the latter to failing to prevent others from carrying them out. A confusion about these two types of sins is a major reason for the continuation of US imperialism. For example, she appears to lump together the US record in Rwanda, the Balkans and Yemen. Though some would beg to differ (for example by outlining the US complicity with actions undertaken by Uganda in the Rwandan context[iv]), it is hard to argue that in the Balkans or Rwanda, the US was a major party responsible for the massive atrocities that took place there.

By contrast, in Yemen the US refueled Saudi planes, shared intelligence with Saudi Arabia and its coalition partners to select targets, gave diplomatic backing as well as the military hardware to Saud Arabia as its bombing campaign fueled the biggest humanitarian catastrophe that currently exists in the world. As is well-documented, when she served as UN Ambassador for the Obama administration, Powers was one of the key decision-makers arguing in favor of the US facilitating the Saudi bombardment of Yemen[v], though this involvement was conveniently omitted in her recently-released memoir “The Education of an Idealist.” To be clear, the Saudi-US coalitions strikes caused a famine that had killed 84.701 children by November 2018,[vi] with the UN estimating 23.300 Yemenis had died by December 2020 – describing it as the world’s “worst humanitarian crisis.”[vii]

People around the world do not ask the US to stop all atrocities, knowing this would most likely lead to military adventures that might destabilize whole regions and undermine peace-processes, as the decision to militarily intervene in Libya – for which Powers also shares responsibility – epitomizes. If domestic laws serve in any way as a precedent in our efforts to create a global system to bring human rights abusers to justice, failing to prevent crimes versus committing them should not be conflated. As Noam Chomsky put it, “The only way we can put a permanent end to terrorism is to stop participating in it.” Hopefully, sometimes in the future, prosecutors will visit the actions of Powers and other members of the Obama administration, which – within the year of 2016 – “blasted combatants or civilians overseas with 72 bombs” every day, along with increasing drone-strikes tenfold,[viii] and pursuing its foreign policy through shadowy networks of unaccountable proxy fighters.[ix]

It would be hard to imagine that a truly critical thinkers such as Paul Farmer, who was once considered for the role, would head AID. But it would have been reasonable to appoint a technocrat less seduced by the delusions of empire than Powers. Her appointment at USAID portends to the danger that the agency will be even further dragged into managing the aftereffects of regime-change operations – which would, in turn, undermine the respect for norms of humanitarian neutrality in the world’s many battlefields. Such dynamics complicate the work of aid-officials who have to operate in diverse geopolitical contexts. Even on the most pragmatic level, the head of AID should not court controversy, as Powers does. Moreover, the agency further sliding into militarism, as it had done since 09/11, would also take the agency’s resources away from addressing the multiple crises that befall the world’s most vulnerable people.

Powers’ demeanors might be more palatable and scholarly compared to some of the other hawks of past US administrations, but her sense of purpose is shredded in empirical arrogance. This is typical for apparatchiks serving in the think tanks and universities, who never have to kill or die for their plans to use force. Her appointment is a slap in the face of self-reflective aid workers who have been working to decouple the field from its colonial legacy. Even though Biden generally shares the worldviews and complicity of Powers, he should appoint somebody more neutral to head USAID.

The post The Appointment of Samantha Powers is Bad News for USAID appeared first on CounterPunch.org.

[1] Africa to be declared free of wild polio in 'momentous' milestone | London Evening Standard | Evening Standard ➤ https://www.standard.co.uk/news/world/africa-free-wild-polio-a4532656.html[2] Change of pace: Accelerations and advances during the Millennium Development Goal era ➤ https://www.brookings.edu/research/change-of-pace-accelerations-and-advances-during-the-millennium-development-goal-era/[3] Two Legal Experts Explain Why The U.S. Should Not Pull Funding From The WHO Amid COVID-19 Pandemic ➤ https://www.forbes.com/sites/coronavirusfrontlines/2020/04/13/two-legal-experts-explain-why-the-us-should-not-pull-funding-from-the-world-health-organization-amid-covid-19/?sh=5afaec41df71[4] America’s secret role in the Rwandan genocide | Rwanda | The Guardian ➤ https://www.theguardian.com/news/2017/sep/12/americas-secret-role-in-the-rwandan-genocide[5] How Dare Samantha Power Scrub the Yemen War From Her Memoir - In These Times ➤ https://inthesetimes.com/article/samantha-power-yemen-war-obama-administration-education-idealist[6] Yemen: 85,000 Children May Have Died from Starvation Since Start of War | Save the Children ➤ https://www.savethechildren.org/us/about-us/media-and-news/2018-press-releases/yemen-85000-children-may-have-died-from-starvation[7] UN humanitarian office puts Yemen war dead at 233,000, mostly from ‘indirect causes’ | | UN News ➤ https://news.un.org/en/story/2020/12/1078972[8] America dropped 26,171 bombs in 2016. What a bloody end to Obama's reign | Medea Benjamin | The Guardian ➤ https://www.theguardian.com/commentisfree/2017/jan/09/america-dropped-26171-bombs-2016-obama-legacy[9] Amazon.de : war on peace ronan farrow ➤ https://www.amazon.de/s/?ie=UTF8&keywords=war+on+peace+ronan+farrow&index=aps&tag=googhydr08-21&ref=pd_sl_sekjnqvz5_e&adgrpid=73780324231&hvpone=&hvptwo=&hvadid=352842165551&hvpos=&hvnetw[10] ➤ https://www.counterpunch.org/2021/02/01/the-appointment-of-samantha-powers-is-bad-news-for-usaid/[11] Home - CounterPunch.org ➤ https://www.counterpunch.org