A scene from Andrew Kuliniasi’s earlier play Meisoga. Image: My Land, My Country

In a nation such as Papua New Guinea where oral storytelling is central to the intergenerational transfer of knowledge and wisdom, playwright Andrew Kuliniasi has taken things to a whole different level by embedding historical accounts and capturing snapshots of a society in transition in a Western art form.

In 2015, Kuliniasi wrote Meisoga, a play based on life of Sine Kepu, the matriarch of her grandmother’s clan. It tells of a young woman forced into leadership by a series of unfortunate events.

His new creation, He Is Victor, is an attempt to capture a moment in time in modern Papua New Guinea society where HIV, TB and discrimination are issues families have to contend with. 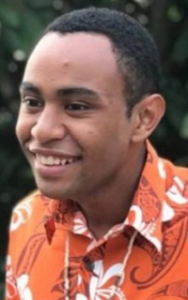 Andrew Kuliniasi … “The story is a contemporary PNG tragedy.” Image: My Land, My Country

“He Is Victor follows the story of a young ‘gun for hire’ journalist named Tolilaga (which means a person who always wants to know) as she tries to uncover the mysterious death of her cousin brother Victor.

“The family hasn’t told her anything and has been keeping Tolilaga out of the loop. Meanwhile Tolilaga struggles with her motivations for finding the truth as she needs one big story for her to get a new job and promotion.

“At the closing of Victor’s hauskrai, she finds Victor’s journal that chronicles the moments leading up to his death.

“This story is a contemporary PNG tragedy.

“It deals with very hard hitting issues that a lot of Papua New Guineans are afraid to talk about.

“The main character, Tolilaga, delves into the issues and exploits the narrative. She’s a sensationalist but that doesn’t mean her stories don’t have merit.

“What Tolilaga tries to do is show the truth, the ugly truth. But the truth in PNG, the land where we live, the unspoken is very controversial.

“This play deals with issues of discrimination against people with HIV, tuberculosis and how these diseases are contracted. The play also questions our culture, in conversations we have about sex and sexuality, gender roles and family bonds.

“This show is going to get people talking and I’m expecting a lot of conversation. Is this show controversial? It maybe depending on individual audience members.

“But the one thing I can say is there will be a lot of crying. So if you’re coming to watch the show, bring a box of tissues.