Herring and her family are not alone. There are approximately 2,400 similar hog farms in North Carolina, most of them in Duplin County, where she lives, as well as Sampson, Bladen, and Robeson counties, and lagoons and spray fields are the primary ways these pork farms handle their hog waste.

If the lagoons are left unchecked, the waste that builds up in the pink-tinted waters releases not only extreme odors but methane, ammonia, and other pollutants that can spread into nearby communities. Methane is a greenhouse gas about 86 times more potent than carbon dioxide over a 20-year period, and the other pollutants, like hydrogen sulfide, which is responsible for the odor, can inflame the eyes, skin, and lungs. The smell leaves people reluctant to exit their houses for fear of difficulty breathing — even just to hang their laundry outdoors. The predominantly Black and low-income communities surrounding these farms have experienced increased rates of respiratory and heart disease for decades.

A map shows the location of hog operations in North Carolina, Duplin and Sampson Counties, seen in red near the center, contain the majority of the state’s hog operations. Wing, S., Cole, D., & Grant, G. (2000)

Pork producers say they have a solution, specifically to the methane issue: capturing the gas coming off of these hog lagoons and using it as fuel, a form of “renewable natural gas,” or RNG. The move is pitched as a solution twofer, a win for the community and the climate, too. Environmental advocates and many local residents, however, argue that an investment in so-called biogas will only further perpetuate a practice that harms neighboring communities.

In 2007, North Carolina’s government mandated that 0.2 percent of energy from local utilities operating in the state come from renewable natural gas. Energy providers struggled to make it happen until 2018, when Optima KV, the first successful swine biogas program in the state, was created in Duplin County. This project collected methane from five hog farms and turned it into energy for Duke Energy, the state’s primary electric utility.

Now, Smithfield is partnering with another major utility, the Richmond, Virginia–based Dominion Energy, to complete another biogas energy development in Duplin and Sampson Counties by summer 2021. This endeavor, christened the Grady Road Project and headquartered in the town of Turkey, would connect 19 farms in the area with a pipeline and “produce enough RNG to heat 4,500 homes, or the equivalent of taking 36,000 cars off the road,” said Kraig Westerbeek, senior director of Smithfield Renewables — the pork company’s sustainability department.

Biogas production works by putting covers over hog waste lagoons and collecting the methane that’s created by the microorganisms in pig feces (instead of allowing it to enter the atmosphere). The methane gas is then funneled into pipelines — approximately 30 miles of them for the Grady Road Project — that transport it to what will be a newly constructed natural gas processing plant. The processed gas can then be injected into an existing natural gas pipeline and be used as an energy source in individual homes and businesses, as well as power plants. Smithfield says that covering lagoons will not only reduce methane emissions but also the terrible odor caused by other gases produced by pig feces. And because the process reduces greenhouse gas emissions from animal waste, renewable natural gas collected from hog farms can be counted as carbon offset credits for utilities like Dominion that are pledging to go carbon neutral. 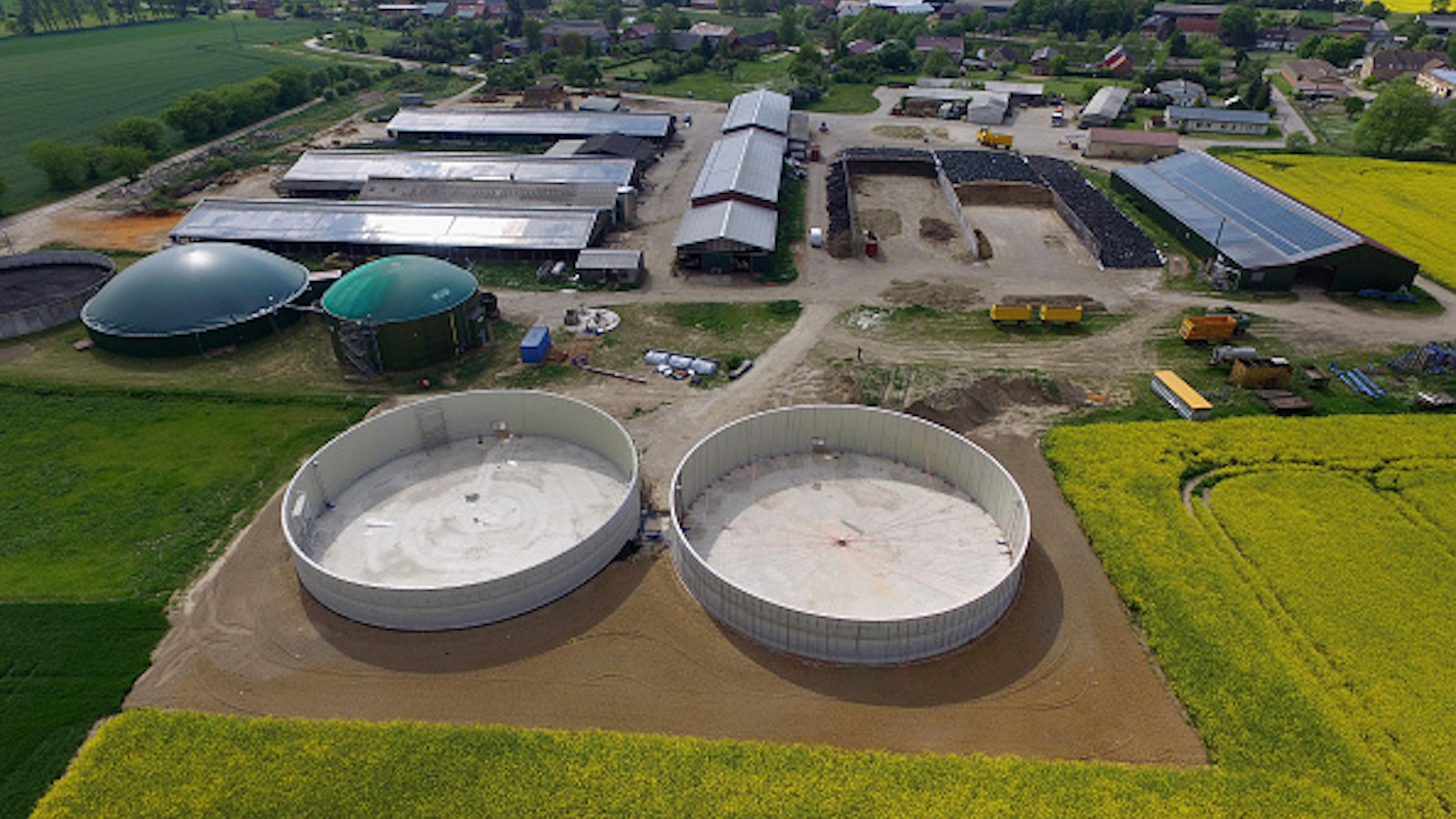 The Grady Road venture is just one of the renewable natural gas systems that Smithfield and Dominion are planning across the country through their Align RNG biogas creation program. In December, Smithfield announced the completion of its first Align RNG system in Milford, Utah. It also has plans to bring Align to Virginia in 2022.

Smithfield claims that the Grady Road Project would be a boon to communities in North Carolina by providing an extra income stream to participating farmers, creating construction jobs, and reducing waste odor. “The bottom line is that this project is good for the environment and a win for local farmers, communities, and energy consumers,” Westerbeek said.

In January, the North Carolina Department of Environmental Quality, or DEQ, approved Smithfield’s most recent air quality permit application for the $30 million project. To move forward with the project, each of the 19 farms involved now must receive additional permits. DEQ held a public meeting in late January to discuss permit modifications for four of the 19 farms. Yet public concerns over a lack of transparency about the Grady Road Project dominated the meeting.

Environmental advocates and people who live near the Grady Road Project site say that collecting biogas won’t reduce most of the pollution involved in industrial hog farming. They say Smithfield’s endeavor therefore amounts to greenwashing.

Ryke Longest, co-director of Duke University’s Environmental Law and Policy Clinic, pointed out to Grist via email that Align RNG enables Smithfield and Dominion “to greenwash carbon pollution through offsets” and make “money off one problem” while leaving the others unsolved. Hog farming produces a lot of pollutants besides the methane harvested by biogas projects. These include ammonia, hydrogen sulfide, fine particulate matter, and other volatile organic compounds. “Align RNG only controls one of these pollutants,” Longest wrote.

Some hog lagoons in North Carolina, specifically older pits, are unlined, meaning that there is no protective layer, usually hard clay, that separates the wastewater from the underlying soil. Westerbeek said that Smithfield’s existing lagoons are “in fact lined and are recognized as so by the state of North Carolina.” But during heavy rains or severe weather events, these lagoons often still overflow. That wastewater, filled with nitrates that have been linked to increased miscarriages, infant mortality, and blue baby syndrome, can seep into groundwater. Biogas operations could actually make hog farms’ pollution problems worse, as a DEQ environmental engineer acknowledged during the recent public hearing. Covering lagoons is believed to increase concentrations of ammonia in the fuchsia waters. 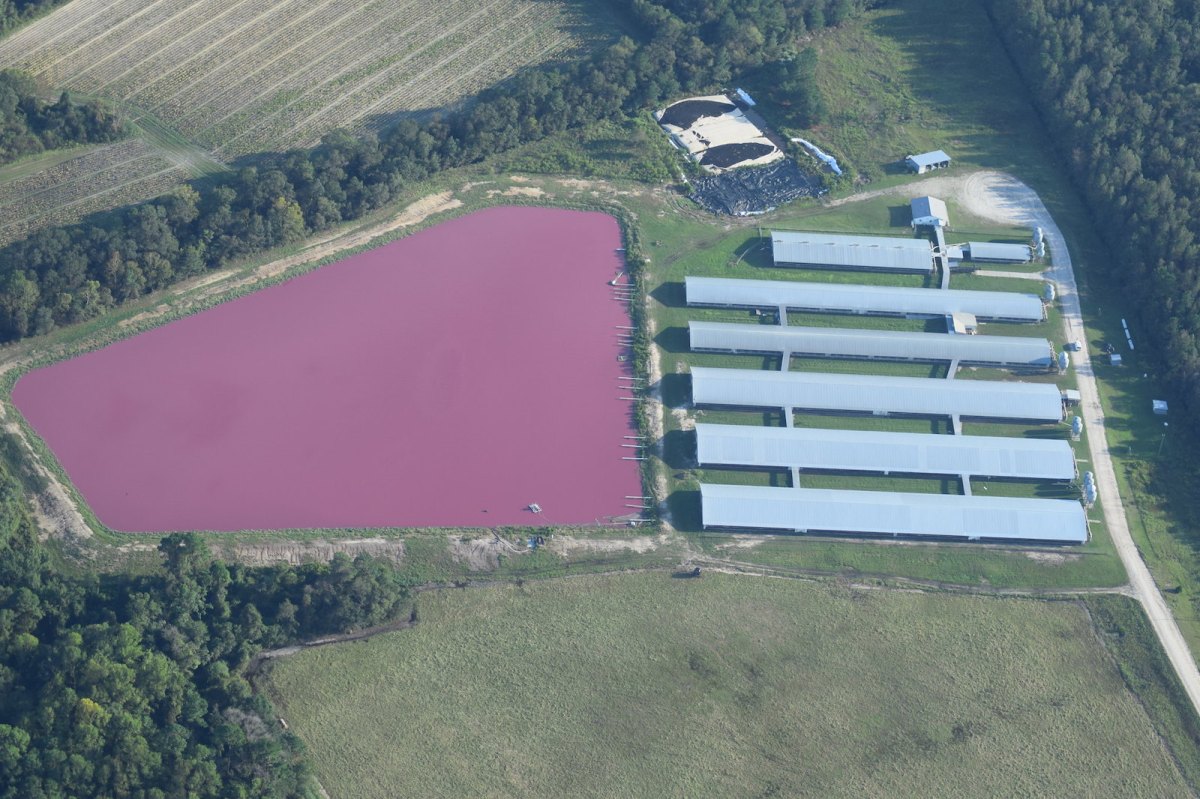 “Most of these communities are communities that are also on well water,” said Sherri White-Williamson, the environmental justice policy director for the nonprofit NC Conservation Network. “Oftentimes, they’re in situations where there are days when they can’t use the water that comes out of their well because it is so badly polluted.”

The ammonia from hog operations is also connected to increased fish kills in local waterways. In July, thousands of fish were killed downstream of hog operations after millions of gallons of feces were washed into the nearby Cape Fear River basin, leading to pollution, harmful algal blooms, and oxygen depletion in the water. In December, a similar spill occurred when about 1 million gallons of untreated hog waste leaked from a hog lagoon operated by a DC Mills Farm into the Trent River.

“Farmers are required to document all activity that could potentially strain the lagoons, such as rainfall and lagoon integrity,” Westerbeek told Grist in response to concerns over water pollution from Smithfield’s lagoons. “Liner conditions are periodically monitored and inspected by the state.”

Even before the Grady Road Project, Smithfield promised to address health concerns associated with its hog farms. In 2000, the company entered into an agreement with North Carolina’s attorney general to invest in “environmentally superior technology” that would convert its primitive waste management systems, like the lagoons, to something safer. The Raleigh News and Observer reported in December that Smithfield still hasn’t fulfilled its end of the bargain, and Elsie Herring believes the reason is financial. “They invested all this money to identify new systems, then they say it’s too costly to implement them,” she said. “So their main goal, in the past and now and in the future, is making more money, more money, more money.”

According to Longest, the company has not yet committed to doing any additional waste treatment beyond covering its North Carolina lagoons to capture methane. And the lagoons are only part of the problem. “This will do nothing to minimize spraying,” Cape Fear Riverkeeper Kemp Burdette told the Waterkeeper Alliance about the use of hog waste as a crop fertilizer.

Westerbeek responded to criticism about spray field fertilizers, saying they are applied at controlled rates and that detailed records of each farm are kept for state inspection. “There is nothing in manure that hasn’t already gone through the digestive system of an animal. It is not pollution. Referring to it as so is inaccurate,” said Westerbeek. “Farmers rely on the nutrient value of manure to fertilize their crops, which is why this project does not and should not eliminate the application of nutrients on local farms and why the state recognizes land application of these nutrients as a hog farming industry practice.”

Environmental advocates and residents oppose the continued use of lagoons and spraying, but they will settle for Smithfield implementing techniques known as “advanced nitrification/denitrification” or AND, which reduces the amount of nitrogen and ammonia created and released from lagoons. Smithfield reportedly already uses AND techniques in some of its Missouri operations. In response to a question about why it doesn’t implement these technologies in North Carolina, Westerbeek said that its operations are in compliance with state regulations. He also said that it is unfair to compare the AND techniques used in other states to the company’s practices in North Carolina because the state’s hog farms are smaller than those in Missouri and there are “dramatically different climate conditions” between regions.

For residents and advocates, Smithfield’s refusal to consider stronger pollution controls is proof that its biogas plans are really about profit, not community protection. “They say there is no harm because they’re covering the lagoons,” Herring told NC Policy Watch last year in reference to a nuisance lawsuit she’s filed against Smithfield. “But this just enables them to do business as usual.”