Fuertes is the executive director of Kahua Pa’a Mua, an education-focused agriculture nonprofit in North Kohala, on the bucolic northern tip of Hawai’i Island (also known as the Big Island). It’s one of many organizations that have popped up in the past decade in pursuit of food security and resilience in the Aloha State.

Hawai’i is “showing the rest of the country how circular and regenerative and local food systems can support the economy, strengthen cultural heritage, and improve the overall health of the community,” according to the Center for Food Safety, a nonprofit advocacy group. Their docuseries, Regenerating Paradise, showcases local farm-to-school programs, community poi harvesting, farm entrepreneurship training programs, and soil health and composting initiatives.

Some of these organizations were founded in the wake of legislation introduced in 2012 that acknowledged that Hawai’i had become “dangerously dependent” on imported food. At the time, 92% of Hawai’i’s food was being imported, which meant that in the event of a natural disaster or global catastrophe, the islands would have only seven days to survive.

On the heels of the Food, Energy, and Conservation Act, a $288 billion five-year agriculture policy bill passed by Congress amid the Great Recession, Hawai’i’s bill called for the expansion of agriculture in order to cut down on expenditures, create more jobs, and keep money within local economies.

However, before the state legislation was even introduced, North Kohala—an area zoned mainly for agriculture—already had a plan to reach 50% food self-sufficiency by 2020. The community has yet to chart their progress, but Kahua Pa’a Mua is one of the smaller nonprofits to help make big steps toward that goal. 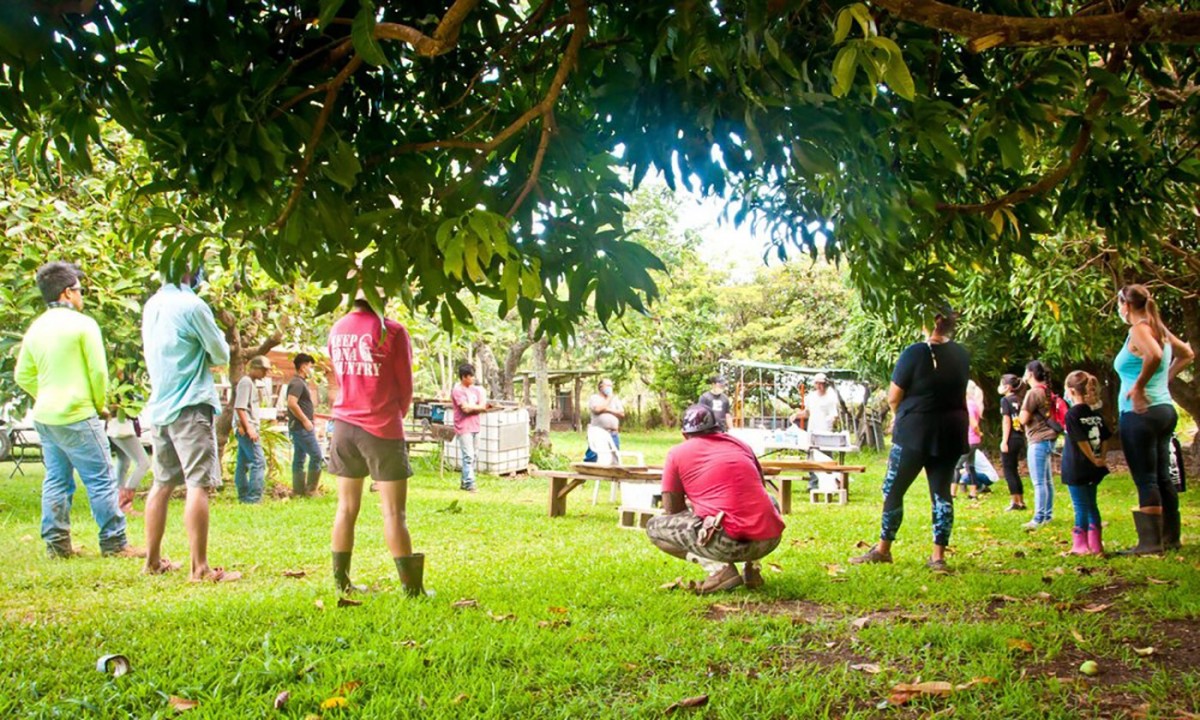 Caring for the Community

Founded in 2010 by Fuertes and his wife, Carol, Kahua Pa’a Mua operates on the premise that true, lasting sustainability comes not only from partnering with the land, but from empowering community members to take care of one another.

With several years of business management experience, Carol Fuertes serves as the nonprofit’s secretary and treasurer. David Fuertes brought the vision, along with 30-plus years of teaching agriculture in the Hawai’i Department of Education, and experience in youth mentorship after he retired. Both wanted to focus their work on area youth when they created the organization—initially an expansion of a family-oriented taro cooperative. “If you want food for a year, plant taro. [If] you want food for more than a year, plant a tree. But if you want to feed the community for a lifetime, invest in our children,” says David Fuertes, who comes from a long line of homesteaders and community builders. He moved to Kohala in 1975, but grew up in Kauai, where his father, who emigrated from the Philippines, worked on a sugar cane plantation and helped organize fellow laborers to strike for better work conditions and pay.

Kahua Pa’a Mua now hosts a mentorship program that teaches students from ages 13 to 18 about animal husbandry and crop production to grow and distribute food throughout the community. The program gets its name from Ho’okahua Ai, which means, “to build a foundation of nutrition, sustenance, communication, and sharing.” 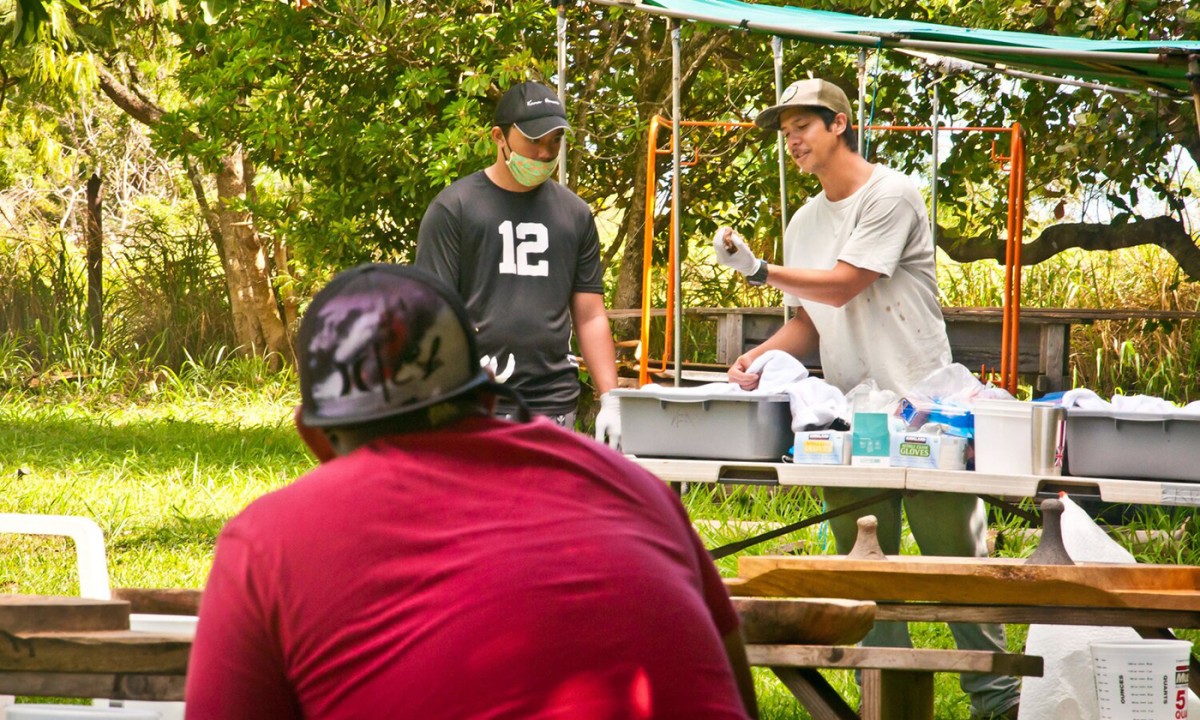 While other youth initiatives throughout the islands use organic farming, at Kahua Pa’a Mua, the students employKorean Natural Farming methods that fertilize soil with indigenous micro-organisms (IMOs)—bacteria, fungi, nematodes, protozoa—from one’s surroundings rather than inorganic fertilizers. Invented in Korea in the mid-1960s by Cho Han-kyu (also known as “Master Cho”), these methods have become widely used in Hawai’i, but have yet to gain traction on the U.S. mainland. Besides producing high yield crops, these techniques help produce healthy soil and sequester carbon, which lessens greenhouse gas emissions.

“It’s pretty much growing nature by using nature,” says Jamiel Ventura, 21, who started off in Kahua Pa’a Mua’s youth mentorship program and has since returned as a farm assistant through the Honolulu-based nonprofit KUPU, a division of AmeriCorps, which facilitates youth-focused environmental programs. Ventura first became interested in agriculture in middle school through a video game called Viva Piñata, where players plant crops in garden plots. It was Fuertes’ teaching of Korean Natural Farming that fully ignited Ventura’s passion. 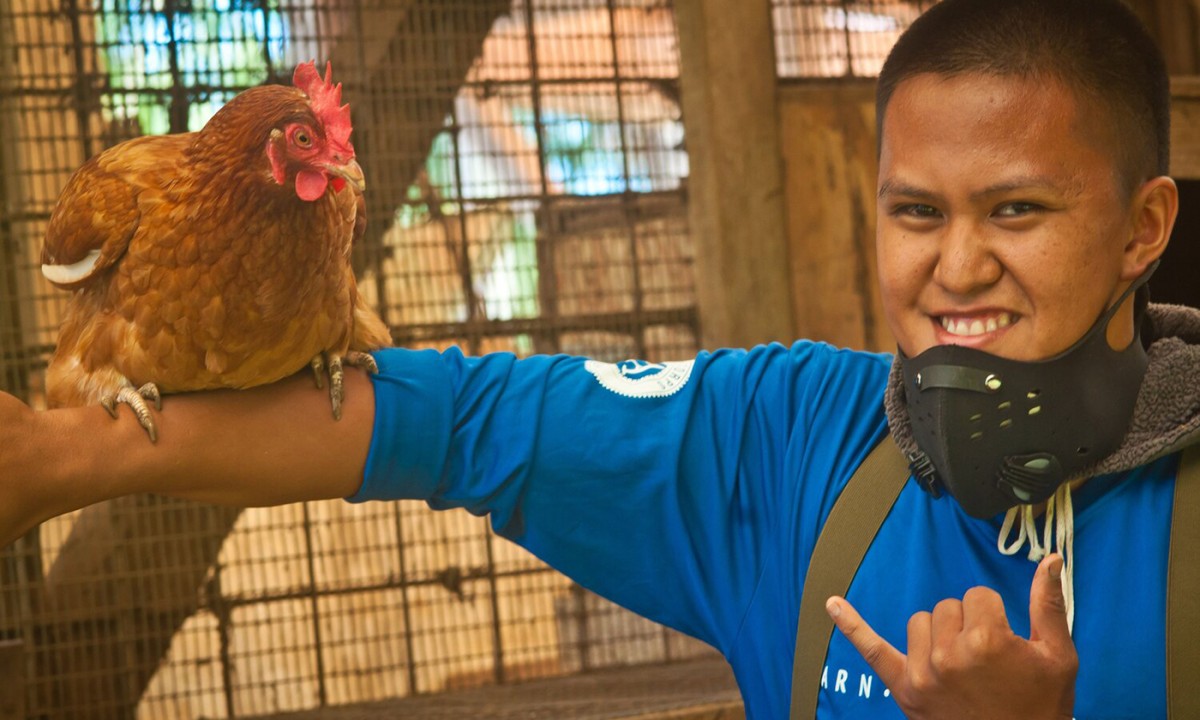 But even Fuertes only began using these techniques in 2008, after being invited to the University of Hawai’i to see Master Cho give a clinic. His motivation to teach this cleaner method of farming came when his son died of cancer.

Before the Fuertes’ son died, at age 36, doctors found trace amounts of 2,4,5-T (Trichlorophenoxyacetic acid) in his body, one ingredient in an herbicide once used on their family farm. The acid was also a component of Agent Orange, an herbicide and defoliant used as part of chemical warfare in the Vietnam War. Banned by the EPA in 1979, 2,4,5-T was used during the plantation era, and still lingered in the community for some time after. According to David Fuertes, if you knew who to ask, you could still get it.

“Being born and raised on a sugar plantation, chemical usage was a way of life,” he says, adding, “We irresponsibly used it to get the job done without thinking of consequences.”

Now David Fuertes works to make sure the health of crops extends to the health of the people as well as the conservation and preservation of the environment.

“The idea is if you take care of the land, the land takes care of you,” he says. 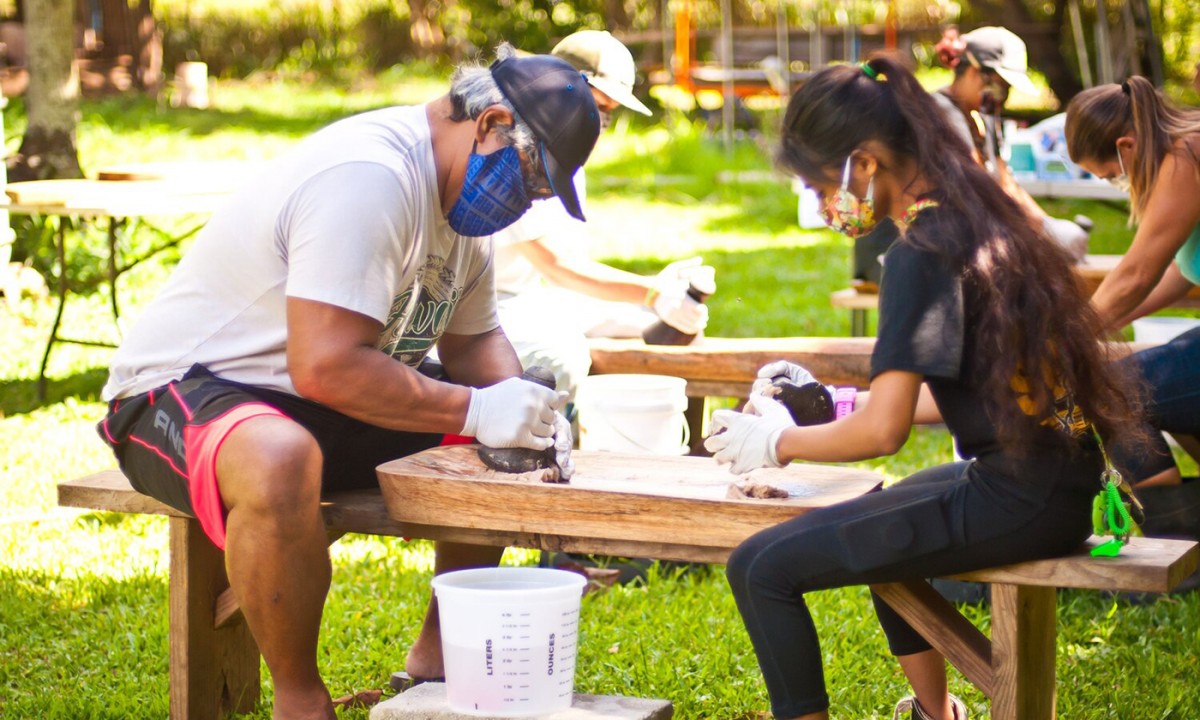 In the mid-18th entury, North Kohala was home to 40,000 people who used systems of subsistence they developed to protect and restore both the land and the ocean. During that time, the concept of private property ownership didn’t exist. After Capt. James Cook’s arrival on the island in 1778, however, foreign investors’ interest in sugar mounted, eventually upending Hawaiians’ way of life. In the 19th century, Kohala was home to six of the state’s dozens of sugar cane plantations, but by the 1990s, these exploitative businesses had dried up as sugar production moved to other countries.

Today Kohala has roughly 6,500 residents, most of whom work in the ailing tourism industry. The land that is zoned for agriculture has been bought up mostly by the wealthy, many of whom don’t use their property as farmland, making it largely inaccessible to the community to grow crops. This blocks Kohala from being the food basket it once was and could be again.

After working as a land custodian for a mainland developer, David Fuertes got lucky and was given 5 acres. That land, which is part of the nonprofit’s learning lab, contains their brand new certified imu, a traditional underground oven. They hope eventually, with enough funding, the lab will have a processing plant that can be used to cook food for schools and the community.

The other 5 acres Fuertes acquired came through a landowner Fuertes knew through Future Farmers of America. It had been sitting idle for 20 years before the owner asked whether Fuertes could use it. In addition to the youth mentorship program, this land houses the nonprofit’s Ohana Agriculture Resilience initiative. Launched in 2019 with the hope of creating a revolution in backyard food sustainability, it provides 10 families with two 100-foot crop rows on their farm for free. Over the course of a year, families learn various aspects of farming and animal husbandry, and can grow whatever they please.

Once they graduate from the program, the families have a choice of equipment to continue their own operations at home. Options include a mobile pen called a chicken tractor to raise chickens, an odorless pigpen that composts manure and processes toxins under the pig’s feet, or an aquaponics tank to grow fish and soil-less produce. 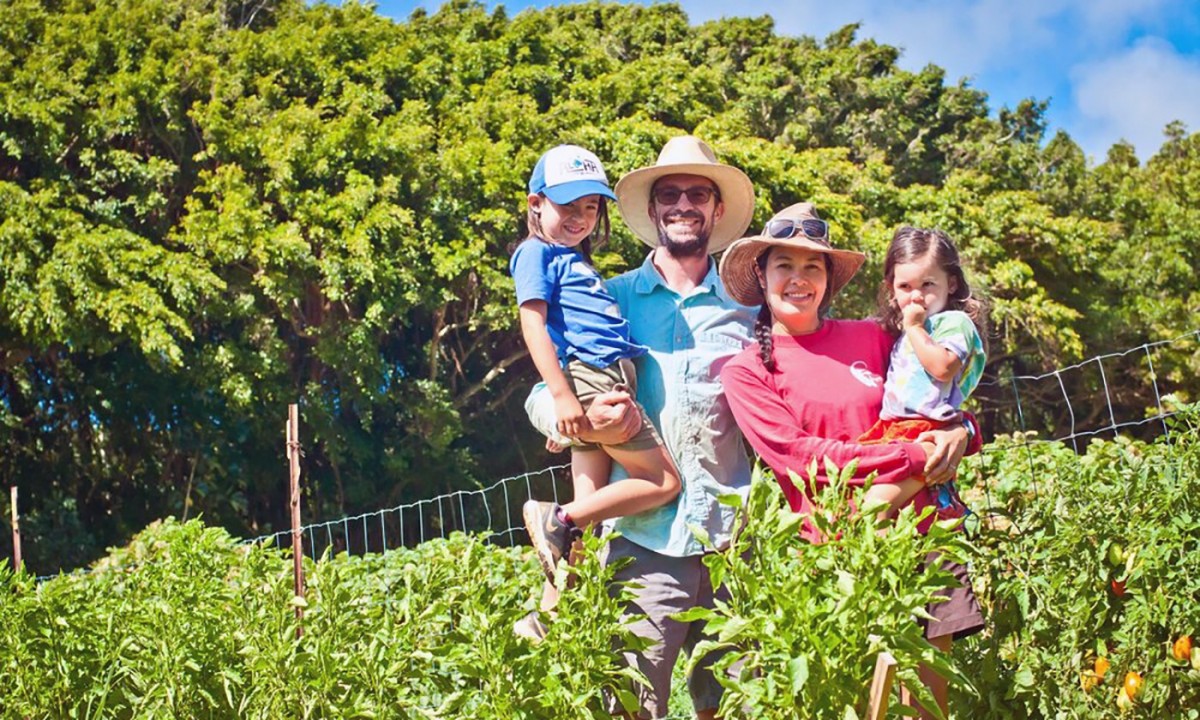 “I got so much out of the program, and we established a network with all the other families,” says David Gibbs, who, along with his wife, Leah, and two children, were part of the initiative’s first Ohana Agriculture Resilience cohort. The Gibbs had recently moved from Utah so their children could grow up in a place knowing where their food came from. Now, the Gibbs’ yard has a garden filled with a variety of fruits and vegetables as well as chickens, whose eggs they share with the community.

One reason the programs are so successful is because of David Fuertes’ warmth. “He always makes us feel welcome,” says Joël Tan, who is part of the current cohort with his husband. Tan is the social impact director for a local organization called 1HeartHub. He found Kahua Pa’a Mua while conducting a needs assessment in the area. Tan and his husband are now growing napa cabbage, uala, and utong, and after the program, they hope to start a garden in their half-acre backyard. “At the end of the day, it’s grace in this time of quarantine,” Tan says. Brandon McCarthy, who is also part of the initiative with his wife and children, says their wish is to grow some produce for local food drives. “I think the spirit of aloha is a real and tangible thing,” he says, “and it’s programs like these that make me feel it the most.”

David Fuertes says in Hawaiian culture that alo means many things, like “love,” “aina” [or “land”], “the universe,” and that ha means “breath.” So when you say aloha to someone, you’re actually giving your breath. “It’s more than just a greeting,” he says. “It’s giving part of your life.”