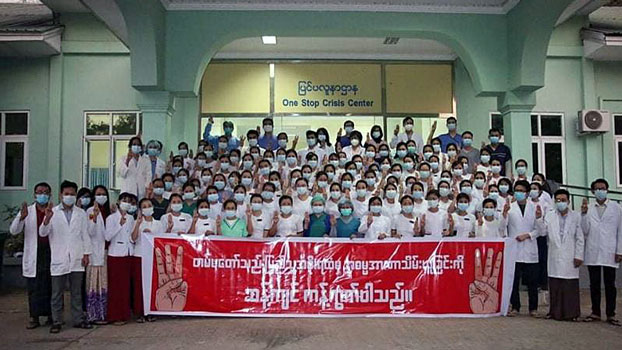 Myanmar’s health service is on the verge of a breakdown as medical workers and providers join a nationwide civil disobedience campaign opposing the military power takeover, forcing most hospitals and intensive care units in government facilities to close their doors, hospital officials in Yangon said Tuesday.

Some government hospitals continue to treat current in-patients but are unable to accept new ones, sending people streaming into private clinics in several townships, they said.

Doctors, nurses and other medical personnel around the country have been participating in the civil disobedience movement — a steady stream of nonviolent public protests against the military coup — since Feb 2.

COVID-19 prevention and vaccination programs are jeopardized now that lab technicians have joined in the movement, health professionals said.

Myanmar’s ruling authorities can no longer determine the daily infection situation and have suspended vaccination programs.

An official from Yangon General Hospital said the civil disobedience campaign has nearly forced the government health care sector to come to a standstill.

“More and more doctors and nurses are participating in the civil disobedience movement,” said the official who declined to give his name for safety reasons. “As many as 80 percent of hospitals in Myanmar have been shut down. Those who are affected by these shutdowns are the patients.”

Yangon General Hospital, including the intensive care units, closed at around 3:30 p.m. Monday, he added.

Dr. Than Min Htut, head of Pathein Hospital in Pathein, said his medical institution is providing treatment only to existing patients.

“We still had nearly 300 patients when the movement started on Feb. 5,” he said. “We are providing treatment for them, [but] we are no longer accepting new patients.”

“We’re also transferring patients to military-operated hospitals if they want to go,” he added.

‘Everything has gone to waste’

Updated figures on COVID-19 infection rates are no longer available because those who work in labs that test samples are also involved in strikes in response to the coup, Than Min Htut said.

“I assume the number of COVID-19 cases has fallen,” he said. “Before Feb. 5, there were consecutive days when they didn’t register any new cases, so we can assume that the current infection rate is low. But it is difficult to confirm because the COVID labs are not operational for now.”

On Tuesday, Myanmar recorded 141,448 coronavirus cases, including 21 new cases, and 3,180 deaths, including three new fatalities, according the Ministry of Health and Sports, which issued an announcement urging all ministry workers to return to their jobs to continue virus prevention and vaccination programs.

“We had received the vaccines, and we were giving the shots,” he said. “Now, the number of vaccinations is dropping, [and] I think the number of new cases is almost zero because the testing mechanisms are no longer operational.”

It would be difficult for the military government to try to regain the headway that medical professionals had made with the vaccination program, Phyo Thiha said.

“If the government sets dates for vaccinations, its work will be hampered by the nationwide protests,” he said. “Under the current circumstances, nothing can be done. Everything that has been done has now gone to waste.”