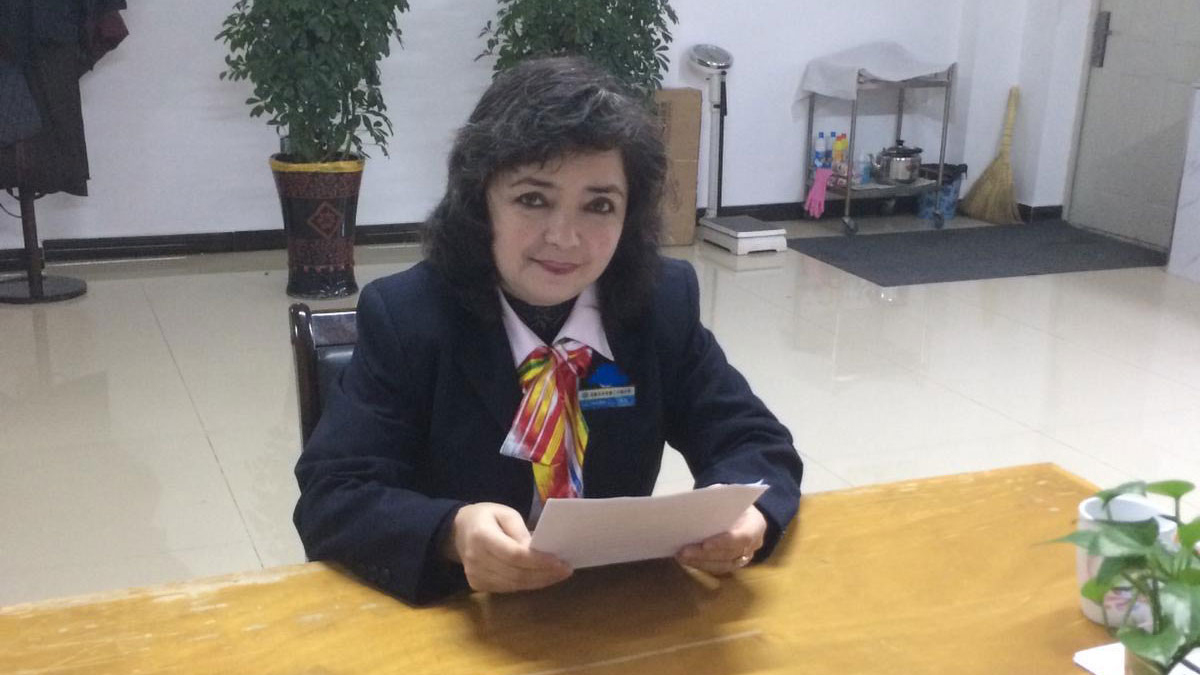 Several women formerly held in internment camps in the Xinjiang Uyghur Autonomous Region (XUAR) have called on Beijing to allow international monitors to probe reports of rights abuses in the region after Chinese state media accused them of fabricating stories of systematic rape in detention.

Last week, a report by the BBC included interviews with four women who claimed they were “systematically raped, sexually abused, and tortured” while held in the XUAR’s vast network of internment camps, where authorities are believed to have held up to 1.8 million Uyghurs and other Muslim minorities since early 2017.

China’s Foreign Ministry and state media quickly dismissed the report as lies, repeating claims that there are no internment camps in the XUAR and attacking the credibility of the women who spoke to the BBC.

One of the women cited in the report, Tursunay Ziawudun, said she spent nine months detained at a camp before she was able to flee the country and relocate to the U.S. She told the BBC that women were removed from their cells “every night” and raped by masked Chinese men, and that she was tortured and later gang-raped on three occasions.

“Their crimes and their oppression have woken us up,” she told RFA’s Uyghur Service. “If investigators are able to go back and see what’s happening there, I will go with them.”

The report also cited Gulzira Auelkhan, an ethnic Kazakh who said that during her 18 months in a camp she was forced to handcuff detainees to their beds, remove their clothes, wait outside the room while various Chinese men entered, and then help the detainees shower after they left.

Sayragul Sauytbay, an ethnic Kazakh teacher forced to work in the camps, described to the BBC watching a woman be gang-raped in front of around 100 detainees, while an Uzbek teacher named Qelbinur Sidik detailed torture that included being penetrated and sodomized with electric batons, as well as receiving “vaccines” that left detainees sterilized.

Sidik told RFA that if China’s claims that there are no camps in the XUAR and that ethnic minorities in the region enjoy happy and prosperous lives thanks to Communist Party rule, “they should let people go and see the truth.”

“They should open the borders. We should be able to go and come without worry,” she said. “If this is true, the simplest thing would be to let us see our relatives. It’s been four years.”

Beginning in October 2018, Beijing acknowledged the existence of the camps, but described them as voluntary “vocational centers,” despite reporting by RFA which has found that detainees are mostly held against their will in poor conditions, where they are forced to endure inhumane treatment and political indoctrination.

While former detainees have reported isolated incidents of rape and sexual abuse in the XUAR’s camps, the BBC’s investigation provides some of the most damning evidence that such practices occur on a systematic and widespread basis.

The BBC report was followed on Tuesday by a report from Bitter Winter, a website launched by the Italian research center CESNUR that focuses on religion in China, which cited several ethnic Kazakhs who now live in foreign countries as saying that sexual abuse of men in the camps is also “a regular rather than an occasional occurrence, particularly with respect to the younger boys.”

And experts believe that while Chinese President Xi Jinping and other high-ranking members of the central government may not have ordered such abuses, it is extremely unlikely that they are not aware of them.

In response to the report, members of the Inter-Parliamentary Alliance on China (IPAC)—a group of more than 200 lawmakers from across the globe—called for a United Nations-led or international legal investigation into the allegations and other abuses in the region. The U.S. State Department said it was “deeply disturbed” by the report and also called for a probe, reiterating a Jan. 20 designation by Washington that China’s policies in the XUAR amount to genocide and crimes against humanity.

During a Feb. 3 regular press briefing in Beijing, Chinese Foreign Ministry spokesperson Wang Wenbin went on the defensive, dismissing the BBC report as having “no factual basis at all.”

“Some of the interviewees in previous reports turned out to be actors spreading false information,” he added, providing no evidence of his claims.

A day later, the official Global Times quoted Jia Chunyang of the China Institutes of Contemporary International Relations, as saying that all of the women quoted in the story had been groomed and “bought” by foreign organizations seeking to hurt China.

“As far as I know, previously some Uyghurs in the region were recruited by overseas separatists and sold all their assets to go abroad,” he said. “Due to language barriers, limited education and vocational skills, they have had difficulty making a living overseas.”

“‘East Turkestan’ separatists and terrorist organizations usually find ways to contact these people and coax them into telling lies to defame China,” he added, using the name Uyghurs prefer for their homeland.

China representatives also noted that Ziawudun, whose account of systemic rape, sexual assault, and torture in the camps forms the core of the BBC report, came to the U.S. with the help of the Uyghur Human Rights Project exile group and is applying for asylum.

The Global Times went on to attack Sauytbay and Sidik, as well as Zumrat Dawut, Mihrigul Tursun, and Gulbahar Jelilova—all women who have testified about their time “studying” or teaching in XUAR camps.

The same day, during a press briefing, Foreign Ministry spokesperson Wang showed a photograph of Dawut to reporters and spoke of her July 2020 interview with the BBC, accusing her of being an “actress” and claiming that she was never in a camp and had never undergone forced sterilization surgery, as she has testified to having undergone on numerous occasions. 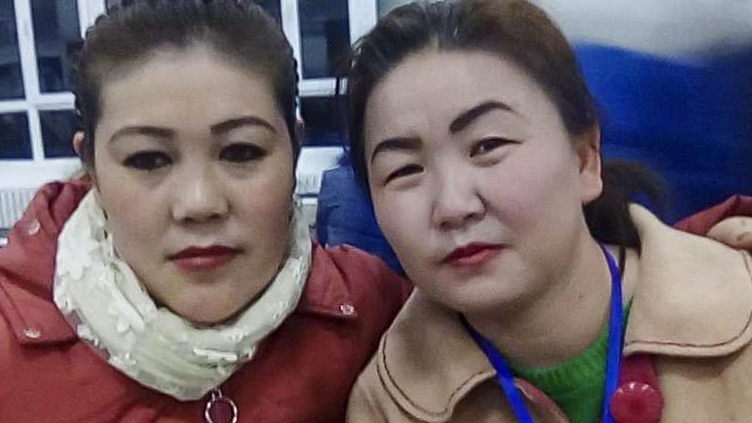 Ziawudun told RFA that accusations she had “ties” to Uyghur exile groups prior to fleeing China were baseless.

“When I left … the Chinese police warned me not to get in touch with the World Uyghur Congress or other Uyghur organizations, and not to fall into their ‘bag of tricks,’” she said.

“It wasn’t just me: while brainwashing us in the camp every day, they taught us about the Uyghur organizations in foreign countries … Otherwise we wouldn’t have even known.”

Jelilova, an ethnic Uyghur born and raised in Kazakhstan who was detained on a business trip to Urumqi and put into three different camps over a period of 15 months between 2017 and 2018, also rejected Beijing’s efforts to smear her testimony.

“I’m a Kazakhstani citizen. Where, how would I have learned the names of prisons and camps,” she said in an interview with RFA from France, where she is currently living.

“[After I returned to Kazakhstan] China itself wrote a letter calling me a terrorist. They noted when I was detained and sent it to Kazakhstan. I will take this to court as evidence … How can they deny this?”

Tursun, who has been based in the United States since 2018 and has given testimony before the U.S. Congress as well as to a variety of media outlets, said Beijing’s efforts to discredit her have destroyed her family.

“After I gave my testimony … China made my parents and my older brother give false testimony against me,” she said. “It’s been almost four years since I’ve been in contact with my parents and siblings. I’ve lost my husband. I’ve lost one of my children. I will not stop until I take China to international court.”

Dawut told RFA that efforts to paint her as an “actress” working for separatist groups would not prevent her from telling the world what she endured.

“The Chinese government thought it might be able to finish off Uyghur women by locking us in camps, oppressing us, raping us, and brainwashing us, but they’ve strengthened our resolve,” she said. “We’re speaking about the trauma.”

Despite increasing international scrutiny and condemnation over China’s policies in the XUAR, Beijing shows no intention to reverse course. According to a report by the official xinhuanet.com website, XUAR Party Secretary Chen Quanguo told a Central Party Committee Inspection Work Group on Feb. 6 that he will stay the course to ensure “a solid job of stable development and reform” in the region.

Sauytbay, a March 2020 recipient of the U.S. State Department’s “Women of Courage” award who now lives in Sweden, told RFA she is not surprised by China’s denial of its abuses in the XUAR.

“All the policies of the Chinese Communist Party are based on lies and find further development in lies,” she said.

“We must give rebuttals to their lies. We must keep fighting for [the others] back in the homeland. We must not give up.”