This article is published in partnership with:

Two decades ago, Nicole Horseherder, a member of the Navajo Nation, coordinated a community meeting. Beneath the shade of Juniper trees at her late grandmother’s house, several dozen people gathered to find a way to protect their pristine water. The springs and wells along Black Mesa, a semi-arid, rocky mesa that overlies the Navajo Aquifer, were increasingly drying up, as tens of billions of gallons of potable water were used to extract, clean, and transport coal mined in the region.

This meeting was the start of a long struggle to safeguard the community from coal projects, which threatened the drinking water supply of both the Navajo and Hopi people. “The mining was using so much of our groundwater and making these really adverse, tremendous impacts on the water table, water quality, and pressure of the aquifers,” says Horseherder.

In 2001, Horseherder formed Tó Nizhóní Ání, a nonprofit dedicated to bringing awareness to the environmental degradation and exploitation caused by coal mining. This has involved direct action, passing tribal resolutions, and negotiating higher rates for the water and coal procured from their land. “So, that’s where we ended up as water protectors—going after the entity that was using our only potable source of water,” Horseherder says.

After decades of activism to protect the water, along with changing economic conditions in the fossil fuel industry, several key coal projects have closed. In 2005, Peabody Energy’s Black Mesa Mine was shut down, a project that drew up to 4,400 acre-feet of water per year to feed a slurry coal pipeline to a coal-fired generating station in Nevada. In 2019, the Salt River Project’s Navajo Generating Station and Peabody Energy’s Kayenta Mine, which supplied coal to the power plant, were also closed.

These projects leave behind a complex legacy: They represent both a major loss of jobs yet also an opportunity to build a new, more sustainable economy and rectify long-standing environmental injustices.

The largest coal plant in the West, the Navajo Generating Station, shadowed the rocky desert landscape with its three 775-foot towers. These quietly spewing smoke stacks represented the United States’ largest source of nitrogen oxide air pollution, which is linked to acid rain and toxic particulate matter. Every year, they emitted 8.6 million tons of carbon dioxide.

This coal behemoth was also the bedrock of the Navajo Nation’s economy, employing about 450 Native people while the nearby Kayenta Mine employed another 400. But as renewable prices hit record lows, the Salt River Project, the primary owner and operator of the power plant, struggled to keep up with air compliance standards while operating economically. Then on the morning of December 22, 2020, those towers came down in a billowing cloud of dust. The demolition of the smokestacks at NGS is a solemn event,” said Horseherder in a statement at the time. “It’s a reminder of decades of exploitation subsidized by cheap coal and water from the Navajo and Hopi.”

It’s a story that’s unfolding across the country as coal becomes increasingly less viable. The question that many communities, especially those who depended on coal projects as a primary employer, face is how to transition to a new economy. Tony Skrelunas, a Navajo expert in economic development who was raised on Black Mesa, sees this moment as an opportunity to move the Navajo Nation away from an economy that exploited Indigenous people.

“In the past, what has happened is that a lot of communities approved land for things, but they didn’t get anything out of it,” Skrelunas says. For instance, the Navajo Generating Station helped power the cities of Phoenix, Las Vegas, Tucson, and Los Angeles, while many of the Navajo people living nearest to the power plant lacked electricity.

Skrelunas envisions an economy where Navajo people are “in the driver’s seat” in the transition to renewable energy and other Native-owned businesses. That’s why he founded Tribe Awaken, a company working to support Navajo-owned economic development. Skrelunas considers it essential to educate the many communities of the Navajo Nation on how to negotiate and advocate for themselves. When it comes to partnering with companies to build larger scale solar projects, for instance, he hopes Navajo people can be active in negotiating the terms. This is the aim of a new initiative Navajo Power, a public benefit corporation, which Skrelunas also helped found.

These benefits could include more revenue for the Navajo people as well as supporting community improvements, such as mitigating land erosion, improving roads, and building water wells. “There’s a way to do this through some more intentful economic planning with the community,” Skrelunas says.

Ultimately, Skrelunas hopes to build what he calls a “restorative economy,” with a lot of Native-owned businesses and a return to more traditional ways of caring for the land and people’s health. Already, he says he’s seeing more of these businesses popping up, including a group of sheepherders that are forming a cooperative and hopefully a USDA-certified processing center for traditionally butchering the animals, which includes careful methods for skinning and cutting the sheep’s insides.

Clean Energy for the Nation

This vision was also echoed by Wahleah Johns, a member of the Navajo Nation and a recent nominee to the Biden-Harris Administration as the director of Indian Energy. She hopes that Navajo people can continue to recultivate a more land-based economy “based on our livelihood as Navajo people, which is ranching, farming, growing food that is from our heirloom seeds of corn, squash,” Johns says. “This is a livelihood that is still very practiced.”

As part of this diverse economy, Johns would like to build a workforce that can supply more homes with power. Of the 55,000 homes in the Navajo Nation, about 15,000 don’t have electricity. While this makes staying indoors during COVID-19 especially challenging, it has long prevented families from refrigerating food and other essential needs. “The families that don’t have access to electricity have been in an emergency situation for a very long time,” says Johns. “There is still a huge need for basic infrastructure.” 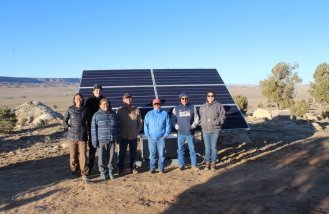 To address this need, Johns co-founded Native Renewables, which provides Navajo and Hopi families with off-grid renewable energy and battery storage to address both the lack of power and unemployment in the Nation. “The bigger vision is to train 50 Native American people who can do solar installation and help support the capacity of our nation and create job opportunities,” Johns says. Currently, she says that they are working to bring the program online, while meeting the needs of those without internet access by developing offline videos.

Johns notes that the Biden administration can also help with the building of a new economy and local plan for climate adaptation for the Navajo Nation and other communities. “There’s a lot of great clean energy projects out there that just need the capital,” Johns says. “That’s the part that I’m hoping this administration will support.”

Reclaiming the land to the highest standard

A key, initial step to rebuilding a better future is reclaiming the land that has been damaged and abandoned by the coal projects’ owners. Under the Surface Mining Cleanup and Reclamation Act, the Salt River Project and Peabody Energy are required to clean up their respective coal projects.

Horseherder says that SRP has been “really forthcoming” about the reclamation process process for the Navajo Generating Station, including providing the Navajo Nation with a clear timeframe. So, far Horseherder says Peabody Energy has done little to reclaim the land surrounding the shuttered Kayenta Mine: structures, electric wires, silos, and conveyor belts were left behind, while the land and water are eroded and contaminated from decades of stripping the land of its soil to extract coal.

“There’s a lot of work that needs to be done,” Horseherder says. “[Peabody Energy] needs to bring that land back to the highest standard as possible because people are going to continue to live on it.” She would like to see the company sit down with the Navajo Nation to document their concerns and start addressing them, including a plan for reclamation of the water and an accurate assessment of how much land has been mined and cultural artifacts excavated.

In response to claims made in this article, a spokesperson from Peabody Energy said in an e-mail, “We remain committed to restoring the land as a vital part of the mining process. Reclamation has been impacted due to COVID-19-related delays and governmental restrictions. Once it is safe to do so, we intend to continue our reclamation efforts.” The spokesperson did not reply to a request for a timeline for the reclamation process.

Skrelunas also hopes that Navajo people can maximize their benefits in negotiating the reclamation process. “There’s hundreds of jobs at stake and multiple years of work,” Skrelunas says. He notes that the closed coal projects have left “hundreds of millions of dollars of assets” that he hopes the Navajo people can find a way to utilize. For instance, Skrelnuas says this could be reutilizing a pipeline, which runs from Black Mesa to Nevada, to bring water back to the community from the Colorado River, reusing the railway that was used to transport coal for tourism, or repurposing transmission lines for renewable energy.

A transition is underway

Already, there are examples of what it might look like to transition from working in coal to being part of a Native-owned economy. For instance, Alberta Henry, who formerly worked for the Kayenta Mine and whose father worked at the mine for forty years, recently opened Big Hogan Enterprise, an inn for visitors of the Grand Canyon. Despite the inn currently being closed due to COVID-19, she dreams of expanding this business to provide food for the inn.

Henry shares her vision for herself with the rest of the community. “I want to be self-sufficient. I want us to have our own power, farming, beef, and sheep,” she says. While there’s still a long way to go, and unemployment is especially steep during a pandemic that has devastated the Navajo Nation, she’s hopeful that already this transition is underway. “That seems like the way it is going.”

The Just Transition Fund is on a mission to create economic opportunity for the frontline communities and workers hardest hit by the transition away from coal. JTF is guided by a belief in the power of communities, supporting locally-led solutions and helping elevate the voices of transition leaders like Tony and Nicole.