Last month, I wrote on Facebook that the resumption of my blog Grubsheet for 2021 was being postponed out of consideration for the national effort to assist the victims of tropical cyclones Yasa and Ana.

I made the observation that it was not the time for politics but for supporting the authorities to get help to those who needed it most. The inspiring sight of the estimable Inia Seruiratu leading the cyclone relief effort in the north with the help of the equally inspiring Australian servicemen and women from HMAS Adelaide was regrettably short lived.

Because it didn’t take long in the public consciousness for politics as usual to rear its ugly head. So much so that I no longer feel bound by my earlier decision.

I apologise that this article is so political and – at more than 6000 words – is so long, indeed the longest I have ever written in these columns. But it is my last one for some time and I have a lot to say. I also apologise that it is so personal, some might say self-indulgently so. But I have a lot to get off my chest.

We have just had a parliamentary session dominated by almost everything other than the needs of cyclone victims or the hundreds of thousands of people suffering because of the covid-induced economic crisis. It was a spectacle that has triggered widespread community dismay and resentment at the apparent lack of empathy of fat-cat MPs and especially those on the FijiFirst government benches.

Much of the nation that isn’t on the public teat is in deep distress. Yet as they struggle to find shelter, put food on the table, worry about disease outbreaks, cope with chronic interruptions to their power and water and make their way through Mumbai-style traffic jams over canyon-sized potholes, they find the public discourse dominated not by their concerns and challenges but the same old political valavala (fighting) and point scoring.

Despite the unprecedented national crisis, it was business as usual in the Parliament, led by the ever-preening Aiyaz Sayed-Khaiyum. Fresh from his “Gestapo-like” deportation of the USP vice-chancellor Professor Pal Ahluwalia, the AG was more than usually testy and belligerent.

Economic crash
Perhaps he has given up even trying to manage the economic crash that has engulfed the nation. He is routinely seen signing fresh documents committing Fiji to further borrowing and portraying them as “strategic partnerships” rather than the loans and indebtedness that they are.

One might reasonably have imagined the AG to be focussed exclusively on managing the economic firestorm and the challenges raging on every front. Yet there he was at a USP Council meeting helping his “Uncle Mahmood” resolve a crisis that he alone created and has done unprecedented damage to Fiji’s relations with the region.

How does it all “put food on the table?”, as the Prime Minister used to ask about every diversion before he too lost the plot. It doesn’t. But for the AG, winning at all costs is what matters. 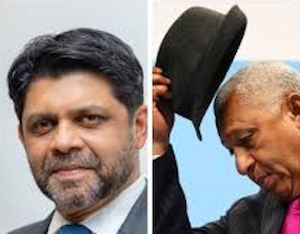 The articulate guy in the turban demanding accountability at USP got in his way and had to go, whatever the political fallout.

As I’ve noted before, crash through or crash is the customary approach. Except that it’s much more likely to be crash on Wonder Boy’s horizon when the voting public finally get their say.

What did a weary nation make of the sight of impeccably-dressed MPs trading barbs and insults, the Speaker boasting about his unique ability to do his job and their elected representatives leaving the chamber laughing and joking with each other in the face of their collective suffering?

No-one ever asks them, of course. Yet one thing is certain. A reckoning looms at the ballot box come election time. There’s an ever-yawning gulf between the haves and have-nots in Fiji – those living on government borrowings and those with no means of support.

‘Assisting’ Fijians
The government policy of “assisting” Fijians by allowing them to draw on their retirement savings – one of the most cynical exercises in spin I have ever witnessed – means that some 60,000 Fijians and counting now have zero balances in their Fiji National Provident Fund (FNPF) accounts. Another crisis is already in the making – vast numbers of retirees with no means of support.

Yet there’s something just as disheartening that poses an equally serious threat to social cohesion and national unity. In my many years observing Fijian politics, I have never witnessed such a disconnect between the political elite and their struggling constituents.

There has been no concession at all to appearances, let alone the substance of relative privilege. The political elite continue to speed around in their blacked-out Prados, trailed by their attendants and security guards, attending all manner of functions at which the food and drink is plentiful and fawning is invariably the currency of maintaining favour and influence.

While outside on the streets, the burgeoning ranks of prostitutes and beggars – including children pleading for food – bears testament to the other face of Fiji. Unadulterated, pitiful despair. Away from the capital, increasing destitution, hunger and homelessness reflect a society that no longer seems to care or certainly doesn’t care enough.

The only genuine Bula Bubble in Fiji is the one inhabited by the political and social elite. For much of the rest of the population, the bubble burst a long time ago.

It could and should have been a time when the government forged a national programme of collective resilience – a back-to-basics grassroots movement led by the state in which shelter, food production and public health became the sole priorities. Instead, the government can’t even keep the power and water on, is consumed by hubris, obsesses about the unimportant and those charged with enforcing the law engage in all manner of criminal activity.

The list of police offences detailed recently – everything from theft and assault to perverting the course of justice – is a sure sign of a nation in big trouble. The AG admitted as the cyclone crisis unfolded that he had only $3.5 million dollars on hand for the relief effort until the foreign cavalry arrived.

Astonishingly, while $38 million a month is being allocated for aircraft leases and loans, there’s barely enough in the government’s contingent emergency funds to buy a couple of prestige houses in Suva.

FijiFirst lost the plot
With its obsession with seemingly everything but the immediate needs of ordinary Fijians, the FijiFirst government appears to have almost totally lost the plot. It isn’t just the chronic spin, media manipulation and continual protestations of “no crisis! Nothing to see here!” We now see normally straight-shooting ministers like Jone Usamate obliged to give misleading answers in the Parliament.

Usamate said Fiji had withdrawn Ratu Inoke Kubuabola as its candidate to lead the Pacific Islands Forum (PIF) out of deference to its Pacific neighbours when the truth is that it was to save the Prime Minister’s face when his handpicked candidate got little or no support.

Once again last week, Voreqe Bainimarama read out a speech written for him by Qorvis and the AG praising the AG and expressing his full support for him. Yes, Prime Minister, we know. You will both go down together, maybe not at the same election but sometime. And it has already happened in the estimation of those who once had high expectations of you but whose confidence you have since lost.

For its part, a cowering media – aside, of course, from the oleaginous flatterers at the CJ Patel Fiji Sun and the AG’s brother’s FBC – is starting to get creative. Creatively subversive.

Did you notice that almost every photograph of the Prime Minister in The Fiji Times during the parliamentary sitting had him laughing uproariously with ministers like Faiyaz Koya and others around him?

Yes, it’s the image of the local Nero fiddling while Rome burns. Laughing in the face of a nation’s suffering. A big joke.

All up, I can’t recall a more depressing parliamentary week. And if it is to be business as usual in the bear pit of Fijian politics, I certainly no longer feel constrained by sensitivity to resume some serious mauling of my own. So here goes.

Read the full Graham Davis article on his blog Grubsheet under the title “Kangaroo court and off I hop”. This shortened commentary is republished with permission. Fiji-born Davis is an award-winning journalist turned communications consultant. He was the Fiji government’s principal communications advisor for six years from 2012 to 2018 and continued to work on Fiji’s global climate and oceans campaign up until the end of the decade.