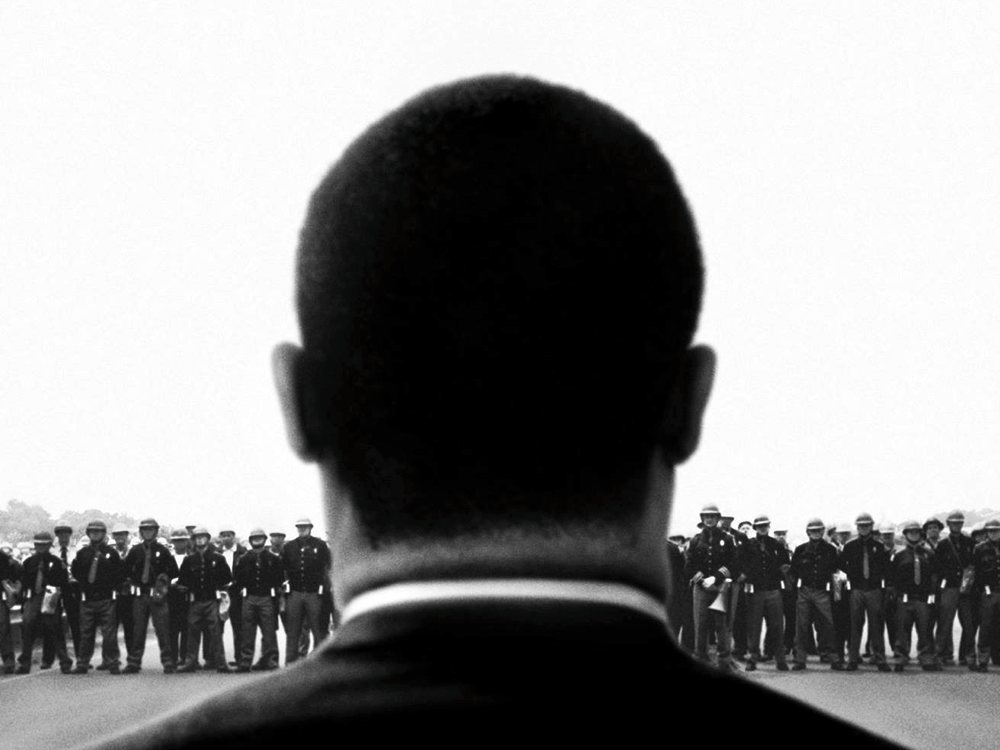 This is a poster for Selma (film). The poster art copyright is believed to belong to the distributor of the film, the publisher of the film or the graphic artist – Fair Use

Many more black faces on your movie screen.

AND . . . why are so many foreign Blacks impersonating African-Americans?

I saw “Selma” six years ago.  I could feel earnest sincerity radiating from the screen.  It was pretty clear the filmmakers were trying to do justice to the legacy of the Rev. Dr. Martin Luther King.  By the time I saw the film, it had already been glowingly reviewed and the entertainment awards industry was showering nominations over the director, cast and crew.

But I had an empty feeling when the film was over.  Why?  The movie was reasonably accurate, historically.  It was professionally crafted.  And it ended with a powerful song by Common and John Legend.  What was missing?  Why was it so forgettable?

I saw “Judas and the Black Messiah” a few days ago, and I started to see what felt wrong about both of these “new Hollywood” pictures.  (Sometimes the game of “What’s Wrong with This Picture?” can be confounding, until you see the obvious answer through the attention-grabbing clutter.)

As with “Selma,” there was a vacuum at the heart of “Judas and the Black Messiah.”

The sad truth was that, in spite of their talent and all their technical proficiency, the actors at the center of these movies, portraying Martin and Fred, gave us bloodless and, pardon the expression, colorless, portrayals of two African-American leaders who had radical visions of a better America.

I don’t believe Dr. King or Fred Hampton would have been satisfied with the presence of more Black faces on our movie screens.  The display of diversity has very little to do with a radical transformation of a political economy that screws so many to reward so few.

King gave the fullest expression of his revolutionary analysis of the rot at the heart of the American economic empire on April 4, 1967, at the Riverside Church in Manhattan.  His address was called, “Beyond Vietnam.”  He became a marked man in that pulpit.  White liberals denounced him.  Many Black reformists abandoned him.  He lost none of his passion and none of his charisma — in fact they were enlarged in him — but when he left that beautiful house of worship, he was a dead man walking.

Selma came before Riverside, but the courage it took to declare the need for such a profound moral/political upheaval was there, in Dr. King, in 1965.

That inherent bravery is missing from the portrayal of King in “Selma.”

Maybe more importantly, director Ava Duvernay and actor David Oyelowe failed to give us the warmth, the compassion and the charm of Dr. King.  Why do these other qualities matter, too?  Because political leaders need them, in order to connect with the great numbers of ordinary citizens who must mobilize themselves to bring the visions of their political leaders to fruition.  (And movie goers care about film characters who have empathy and a sense of humor.  That caring is essential to the movie experience.)

This may be the moment to touch on a delicate subject: Diversity on our movie screens is a worthy goal.  And so is diversity behind the camera.

Doesn’t it matter to the filmmakers that African-American actors would bring greater authenticity to these critically important portrayals?  Is that a superficial matter?

Were there no African-American actors with the screen presence and the skills to bring these two historical figures to life?

Clearly all of the powerful people who brought these films into existence said, “No.”  Or possibly, they said, “It doesn’t matter.  We have other priorities.”

My wife has a theory: Actors, like the UK’s David Oyelowe, who grew up in England have to work hard to disguise their English accents.  British attention to detail in the dramatic arts requires that every single syllable out of their mouths sounds exactly right.  That’s a tall order, and my wife thinks that David Oyelowe’s efforts to “sound American” drained the lifeblood out of his Martin Luther King, and left us with that empty feeling about Dr. King and the meaning of the Selma-to-Montgomery March.

(And, just by the by, why was “Selma”’s LBJ so lacking in Texas pizzazz?  Maybe Brit actor Tom Wilkinson’s energy was all played out in trying to capture that elusive American country sound.)

Finally, one image in “Selma” should make everyone cringe: King lounges on his side on a bed in a comfortable motel room.  He is wearing a silk embroidered dressing gown and making notes on the pages of a speech.  One of his aides knocks on the door and delivers a message.  King dismisses him with just a touch of irritation.  He is too busy doctoring his script.

Who would admire such a fop?  Who would follow him on a dangerous march through the heart of the South?

Fred Hampton was a very different figure from Dr. King.  But he suffers a similar fate at Hollywood’s hands in “Judas and the Black Messiah.”  Let’s say, as an audience member, I know very little about the national Black Panther movement of the 1960s and ‘70s.  Let’s say I know even less about the Panthers’ Illinois chapter headquartered in Chicago, or its youthful chairman, Fred Hampton.  What do I see in this movie? I see a Fred Hampton who comes across as a pompous, authoritarian pantload. This Fred Hampton seems seriously lacking in compassion and humor.

In “Judas,” we have another Afro-British actor portraying a Black historical figure with deep roots in the racist soil of America.  Daniel Kaluuya is a skilled performer and his accent sounds accurate.  But, otherwise, I don’t see much Fred Hampton there.  Daniel Kaluuya is at least 31 years old.  When the movie begins, Fred Hampton is 18 or 19; he’s twenty-one when he’s assassinated.  Why does this serious age disparity matter?

The real Fred Hampton was seen as a threat because he was so young and full of adolescent vitality, unlike Daniel Kaluuya.  Fred was dangerous because he could fire up crowds of young people, of all races.

As I watch the film, I’m asking, Why are the young people who are listening to this fictional Fred Hampton so worked up, so excited by his speechifying?  And why are they mindlessly chanting the phrases he feeds them?

Shaka King, the director of “Judas” makes Chicago’s Panther supporters look and sound a little too much like the enthusiastic masses in Leni Riefenstahl’s “Triumph of the Will.”  Was that his intention?  Do Shaka King and the powers behind him want us to see Fred Hampton as a power-hungry, thirty-something bully?  Were Chicago’s young Panther supporters his sheep?

I sensed something slightly sinister in this movie’s Panther Party and in its Illinois chapter Chairman.

+ All those who sat through “Selma” and “Judas” owe it to themselves to see “Sorry to Bother You.” (More below.)

+ Ava Duvernay and Shaka King have given us beautifully crafted artifacts.  The skills that went into making these pictures should be, and are being, recognized by the entertainment awards industry.

+ But there’s something missing.  Call it Juice.  Call it Heart.  Or  Soul.  Why?  I don’t blame Duvernay and King.  The “Why?” has something to do with the imperatives of finance capital, and the way those imperatives play out when powerful people, banks, hedge funds, etc., decide to invest their capital in Hollywood.

+ And the requirements of investment capital may have something to do with the casting of bland but talented Afro-Brits.

+ Denzel Washington, in “X,” was a better Malcolm than David Oyelowe’s Dr. King or Daniel Kaluuya’s Hampton.  But not by much.  The foundation-shaking message of Malcolm X never burst off the screen in Spike Lee’s otherwise well-crafted biopic.

+ We recently watched the documentary “Giving Voice.”  Not a great film, but it shows dozens of African-American high school students giving powerful performances of monologues from the plays of the late August Wilson.  Many dazzling displays of talent and hard work.  Truly impressive technical skills matched with big hearts.  Do you really have to go to the UK or Canada or some other corner of the British Commonwealth?

+ Off-topic, but how did Spike Lee get the Vietnam War so wrong?  Too young to know better?

+ Surface diversity should never be confused with structural change.

+ And every race and creed has its sell-outs and its scoundrels.

“You may make motion pictures about Black people, using Black actors (preferably trained in Great Britain). And you may demonize certain white power-structure enforcers, from the PAST. But you will NOT challenge the solid bedrock of structural racism.”

One of the few directors I’m aware of who showed the financial power structure in its awful glory was Boots Reilly — “Sorry to Bother You.”  The picture is a roller-coaster of brilliant comedy, labor-struggle drama and, finally, a jarring swerve into sci-fi horror.

+ Sacha Baron Cohen (very British) puts on a passable Worcester, Mass, accent, but he brings not even a whiff of Abbie Hoffman’s warmth and charm to the “Chicago 7” travesty.  Baron Cohen had a shot at bringing one of American history’s most colorful characters to life, but all we got was cold British sarcasm.  Eddie Redmayne (also of UK extraction) manages a generic American accent, but gives us little else, besides a bland self-righteousness, as Tom Hayden.  Accent wasn’t a problem for the American actor John Carroll Lynch, but the single greatest insult, in Aaron Sorkin’s unfunny political farce, is to the memory of Dave Dellinger.  Lynch is, physically, in the family of Oliver Hardy, John Candy and Chris Farley.  Sorkin’s scripting and his casting of Lynch as Dellinger — who was one of the great unsung heroes of the era — is a cheap, cheesy potshot.