Protests against the regime meanwhile continued in full force in major cities following a weekend of violence and bloodshed that left at least 20 demonstrators dead.

During a court hearing conducted by video conference in the capital Naypyidaw, Aung San Suu Kyi faced two charges for incitement under Section 505(b) of the Penal Code for allegedly issuing reports with intent to cause public fear and for possessing walkie-talkie radios without a license under the Telecommunications Law, attorney Khin Maung Zaw said.

“Two more charges have been added to the charges for Daw [honorific] Aung San Suu Kyi,” he told RFA.

In February, the state counselor was charged with possession of “illegally” imported walkie-talkies found in her home under the Export and Import Law, an offense that carries a maximum sentence of three years in prison. She also was charged with violating the Natural Disaster Management Law for breaching COVID-19 pandemic restrictions during the election campaign.

In all, the 75-year-old politician faces four charges, carrying a total of up to nine years in jail, Khin Maung Zaw said.

The junta meanwhile added a new charge against President Win Myint for incitement to defame the state. He was charged in February for allegedly violating the Natural Disaster Management Law for pre-election campaigning amid COVID-19 restrictions on public gatherings.

The regime also filed an incitement charge against Naypyidaw Mayor Myo, who has been detained in an undisclosed location since the coup, Khin Maung Zaw said.

The incitement charges under Section 505(b) carries a maximum two-year prison sentence, while the telecommunications violation has a maximum penalty of up to one year in jail, a fine, or both.

Both Aung San Suu Kyi and Win Myint have been detained since the Feb. 1 coup, when the military seized the democratically elected government after weeks of tension following November 2020 elections that the military and its proxy political party claimed were fraudulent.

The junta also rounded up other officials from Aung San Suu Kyi’s National League for Democracy (NLD) and prevented lawmakers from beginning a new session in the national parliament.

Khin Maung Zaw said Aung San Suu Kyi appointed him to represent her for all charges filed against her, but the court and the police have not allowed him to proceed.

He and his legal team were outside Naypyidaw’s Zebuthiri Township Court where the state counselor’s hearing was held, but they were not allowed to enter, he said.

Nang Aye Mya Thiri, an associate judge and information officer at the court, told reporters that documents for approving Aung San Suu Kyi’s attorney could not be completed at the hearing.

That hearing is scheduled for March 16, she said.

Khin Maung Zaw told reporters that he listened to Aung San Suu Kyi and Win Myint talking with the judge via the video conference and that the state counselor said she wanted to meet with her attorney.

Khin Maung Zaw accused court officials and police of deliberately delaying the process to approve her legal representative despite the submission of signed documents on Feb. 16.

“They said they had been negotiating with NLD leaders in the last minutes before the hearing today, but we were informed that they haven’t reached out to any of the NLD head offices, neither the one in Naypyidaw nor the one in Bahan township in Yangon,” he said.

“They didn’t meet any NLD party leaders. They are delaying the process intentionally. They are violating the very basic human right to legal counsel, as mandated in the constitution and Universal Declaration of Human Rights,” Khan Maung Zaw said.

NLD lawmaker Khin San Hlaing said it is very unfair to pile on additional charges against the party leader.

“As a citizen of Myanmar, I think our leader didn’t violate any laws or commit any offenses,” she said. “We condemned the charges strongly. We disagreed with them. We are trying to broadcast what happened here to the international community.” 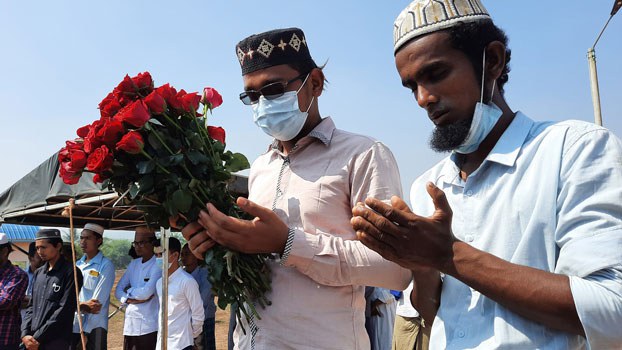 At least four protesters were killed and several others injured by security forces in Yangon on Monday, witnesses said, a day after violent crackdowns in which police shot dead at least 20 people in the bloodiest day in a month of mass demonstrations against the military’s ouster of the elected government.

Police and soldiers used tear gas, stun grenades, and live ammunition against protesters in Myanmar’s largest city, though demonstrators there and in other cities and towns across the country were undeterred.

Security forces blocked the main intersection at Myae Ni Gone junction, a main rallying site for Yangon protesters and used bulldozers to move barricades set up by demonstrators on nearby roads. Many people were arrested, though a figure was unavailable.

Hledan junction, another rally hot spot, had been occupied by police since early morning. People who staged protests on nearby roads tried to avoid confrontations with security forces by running away from officers chasing them, and then regrouping in other places.

Similar protests were reported in Pathein in Ayeyarwady Region and in three towns in southeastern Myanmar’s Mon state.

“We cannot accept the rejection of the 2020 election results or the arrests of our leaders,” said a protester in Pathein. “We will protest in every way possible until our leaders are released from custody. Their lethal use of force is a violation of all human rights standards, domestic or international. “

Police in riot gear stormed a rally in Lashio, northern Shan State, on Monday, removing hundreds of protesters by truck.

Some protesters caught a police sergeant dressed in civilian clothes and took him into an alley near a Kachin Christian church, though it was not clear what they did with him. Police later raided the church and arrested church secretary Naw Mai and about a dozen others inside the church and its compound, witnesses said.

“They beat up our preacher and arrested him,” a town resident said.

In a separate incident, about 200 youths staged a protest against the military dictatorship near Yonhaw Stadium and Myoma Market. Police ordered the protesters to disperse and marched aggressively toward them spraying tear gas and setting stun grenades. Two people, including Myint Maw of the Helping Hand charity group, sustained slight injuries, witnesses said. 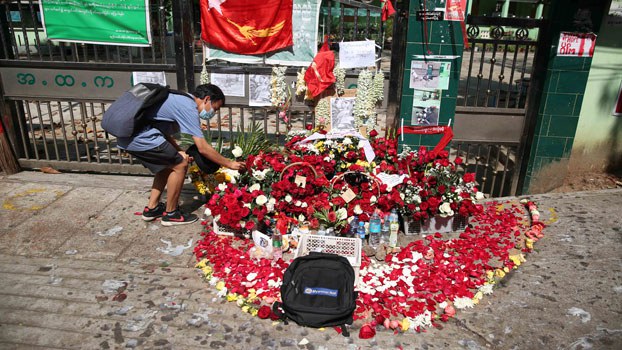 A Myanmar man lays flowers at a makeshift memorial for anti-junta protesters killed by police at Hledan junction in Yangon, March 1, 2021. Credit: RFA

In Mawlamyine, where a man was killed by police gunfire the previous day, several protesters were arrested, witnesses said.

Hundreds of people also took part in rallies that continued in three towns in western Myanmar’s Chin state, in Myitkyina of Kachin state, and in Loikaw of Kayah state.

In the town of Bago, police killed two men and seriously injured three others on Sunday when they fired live rounds at demonstrators. Protesters marched in two columns today, but there were no incidents.

Police and soldiers in Kalemyo, Sagaing region, used tear gas to disperse some of the 10,000 protesters in the town, wounding five and arresting two, witnesses said

“We were calling for the release of two detained men,” said one protester at the scene.

“First, it went on smoothly, and they said the men would be freed at 4 p.m., [but] later on tensions rose, and they fired two tear-gas bombs and a stun grenade,” he said. “One young person was seriously injured by a tear-gas canister that blew up close to him.”

In Magway, nearly 20 of more than 50 people arrested by police on Sunday were released on Monday morning.

About 20,000 people in the town of Chauk took to the streets and chanted anti-military slogans without incident were reported.

Thousands of people in Yangon, Mandalay, and Mawlamyine on Monday mourned fellow protesters killed by police gunfire a day earlier.

Schoolteacher Tin Nwe Yi, 53, died of a heart condition after she was struck on the arm by a rubber bullet in front of a township education office in Yangon, her colleagues said. She was at a rallying site preparing to march with other civil servants when police attacked them. Ten people, including seven schoolteachers, were arrested, and their whereabouts are still unknown, they said.

Memorial services were held today for three others who were killed by police gunfire in Yangon on Sunday.

In Mandalay, people retrieved from a hospital the body of Maung Maung Oo, 41, who was shot in the head by police as he rode on his motorcycle, trying to escape a crackdown on protesters on Sunday.

In Mawlamyine, funeral services were held for a 21-year old Muslim youth who was shot in the head by police a day earlier.

Activists said on social media that at least 26 people nationwide died during police crackdowns on protesters on Sunday. 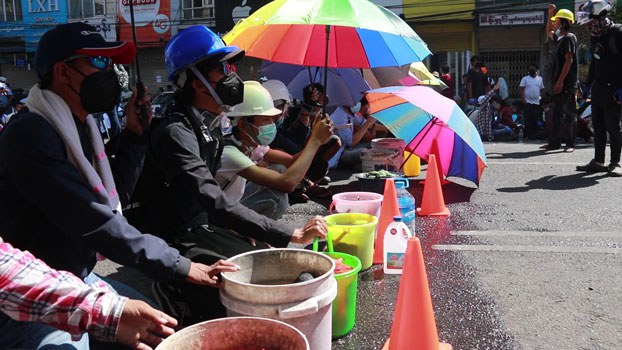 Myanmar anti-junta protesters sit with umbrellas and buckets of water to protect themselves from tear gas sprayed by police in Yangon, March 1, 2021. Credit: RFA

The Assistance Association for Political Prisoners, a watchdog group, said that as of Monday, 1,213 people had been arrested, charged, or sentenced in relation to the military coup, with 913 still being held.

Attorneys from the Burma Lawyers’ Council who are trying to help detained protesters said more than 600 people, including activists and reporters, were detained Sunday in Yangon.

Families of arrested people gathered in front of Insein Prison on the city’s outskirts on Monday, hoping to see their relatives, but later said they heard nothing about them.

“The main thing for us is to know their whereabouts, what we can do to help them,” said one man waiting outside the prison. “We want to know what we can do legally to get them released.”

“A lot of these people do not know where their family members are being held,” he added.

One attorney pointed out that police can hold protesters only for 24 hours only, but said that might not be the case for others hauled in.

“That’s the usual procedure, [but] they might hold protest leaders, politicians, and journalists for a longer period,” the attorney said. “Then we will have to find out what charges would be brought against them and what kind of remand would be possible for them.”