Asia Pacific Report, the Auckland-based independent news and analysis website, has been increasingly targeted by Indonesian trolls over the past three months, involving a spate of “letters to the editor” and social media attacks.

One of the most frequent letter writers, an “Abel Lekahena”, who claims to be a “student” or “writing on behalf of the people of Papua”, has accused APR of “only taking the separatists’ narrative as they played the victim”.

Sometimes he is purportedly a student living in “Yogyakarta”; at other times he is a migrant from East Nusa Tenggara “currently living in Manokwari, West Papua”. He has written to Asia Pacific Report 10 times in the past eight weeks – twice in one day on December 29.

“Lekahena”, if that is even his real name, claims in his latest letter on Monday that since January, “the armed separatists prowled in Intan Jaya” and burned a missionary plane on January 6 and he has cited several clashes between pro-independence militants seeking independence for West Papua and the colonial Indonesian security forces.

He also blames the increase of internal Papuan refugees on the rebels.

“Instead of feeling guilty, armed separatists continue to make victims, spread propaganda, and take refuge behind refugees’ issues to seek sympathy from the domestic and international public,” claimed Lekahena in his letter to APR’s news editor.

“I would like to point out that Asia Pacific Report as a credible media should have also publish/talk/discuss [sic] regarding the endless list of the Free Papua armed separatists’ crimes in January-February 2021.”

Lekahena follows with a long list of web links to alleged Papuan rebel “crimes” while utterly ignoring the widely documented human rights violations and atrocities attributed by international watchdogs to the Indonesian security forces – both recently and over the last half century since Indonesian paratroopers invaded in 1961 and Jakarta gained control of the Papuan half of New Guinea island in a sham “Act of Free Choice” in 1969. 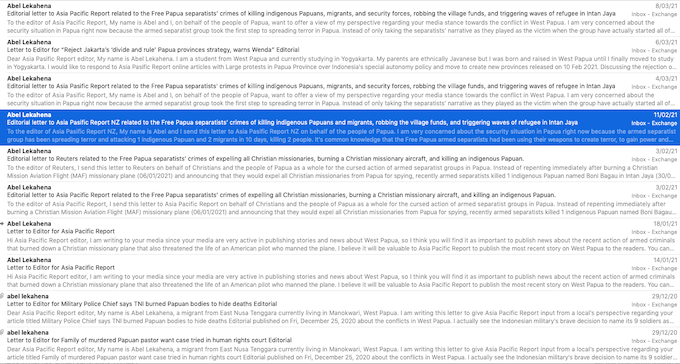 ‘Separatist’ smear label
Our reply to Abel Lekahena is first that editorially we do not accept the term “separatist” which is a smear label that should not be used when describing indigenous people struggling to regain their homeland. This offensive word should also be discarded by the world’s media and news agencies as well.

We are reporting the struggle of pro-independence militants and human rights activists against a grave injustice. Papuans are Melanesian, just like their brothers and sisters across the border in Papua New Guinea.

They are Pacific Islanders.

Second, a random look at newspaper headlines in Papua today – such as the West Papua Daily English language edition of Tabloid Jubi – reveals the plight of many Papuans and it is time Western countries, especially Australia and New Zealand, woke up to the reality and really put pressure on Jakarta to urgently allow a fact-finding team with the UN Rapporteurs on Human Rights and Indigenous Peoples to visit Papua:

March 8: ‘Indonesia has gone too far’: A disabled man and a teenager in West Papua’s Intan Jaya shot dead 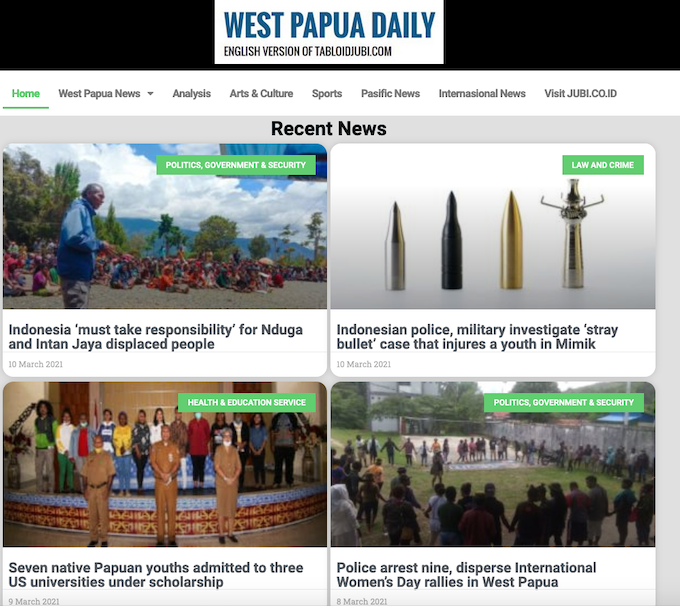 Reveal yourself
Finally, Abel Lekahena, we invite you reveal who you are really are, and stop wasting our time with pointless propaganda for the Indonesian security forces. Many reports have surfaced about the trolling of media in Pacific countries perceived to be sympathetic voices to West Papuan self-determination.

Facebook and other social media have scrapped or suspended many fake web pages created by the Indonesian military and other authorities.

Let us get on with our job of informing our readers with the facts, stripped of the TNI (Indonesian security forces) fake news and spin or repression, and continue our commitment to speaking truth to power.

Dr David Robie is the retired director of the Pacific Media Centre. 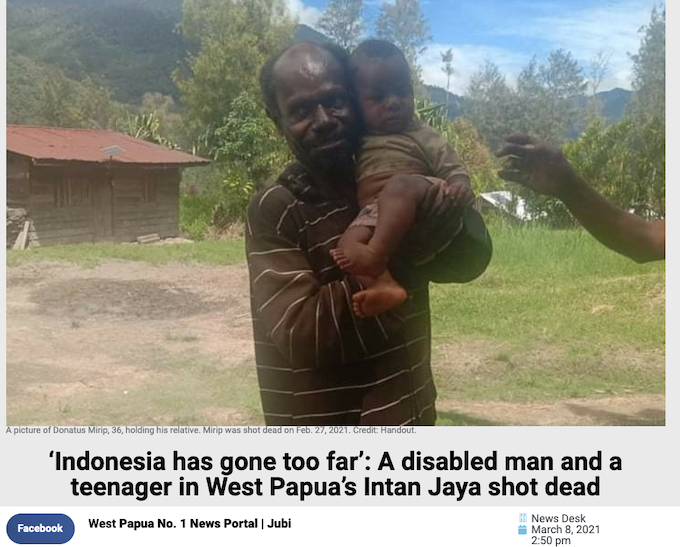 A report of a disabled Papuan man and a teenager being shot by Indonesian security forces in the West Papua Daily on March 8. Image: APR screenshot