The dawn breaks each morning on a hundred different mountain ranges in the Great Basin, with few human eyes to see it. Many of these mountain chains will be unfamiliar to most – the Toquimas, the Wah Wahs, the Goshutes, the Sheeprocks, the Fox Range – but the one thing they all have in common is their juniper woodlands that have been here for thousands of years. On the mesas and tablelands of the Colorado Plateau, guarding the slickrock canyons and mazes of badlands that are American icons, are the fragile woodlands (don’t bust the crust!) of pinyon and juniper that perfume the air with that ineffable scent of wild country. Today, just as the world awakens to the reality that we need as much carbon sequestration as possible, these arid woodlands are under assault from a coordinated campaign to deforest the West, orchestrated by the livestock industry.

Action to address climate change has been announced as a central policy priority with the Biden administration, putting the significant role of domestic livestock in climate disruption in the spotlight. Methane emissions (both from the four-chambered digestion system that allows ruminants to digest cellulose, and from the breakdown of manure) get the lion’s share of the attention, in keeping with America’s end-of-tailpipe fixation on measuring pollution. But the carbon cycle is circular, and livestock exacerbate climate disruption at many points in the cycle. One key effect is by bankrupting soil carbon reserves by eliminating deep-rooted perennial plants and replacing them with annual weeds, and another is through deforestation to create cattle pasture. While deforestation for livestock is widely-recognized as a major climate problem in the Amazonian rainforests, deforestation of pinyon-juniper woodlands is ramping up across the American West, and similarly contributes to the climate catastrophe.

The real reason that pinyon-juniper woodlands are so aggressively targeted for “control” and “treatment,” even though they are an ecologically important and natural component of western ecosystems, comes down to the almighty dollar. A recent survey of Bureau of Land Management employees by Public Employees for Environmental Responsibility contains this clue: “with ranchers, one employee noted that the current excuse to cut pinyon juniper and sagebrush to prevent wildfire, which have been the native species for thousands of years, has no scientific reasoning. Instead, it’s to benefit cattle.” 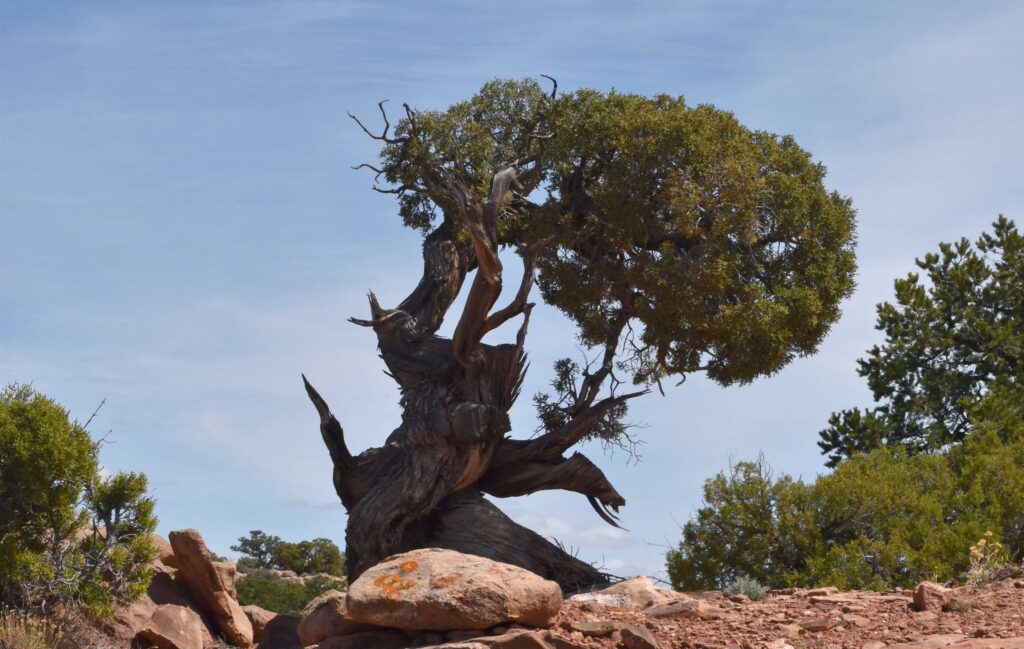 During the dying days of the Trump administration, an all-out war on juniper woodlands was underway under the guise of fire prevention. The Tri-State Fuel Breaks Project planned almost a thousand miles of strips; scientists criticized the project, predicting it “will not achieve success and may in fact exacerbate degradation of the native flora and fauna of the region.” The Idaho portion was approved in May of 2020, authorizing “manual, mechanical, and chemical treatments, along with targeted grazing and prescribed fire.” The Great Basin Fuel Breaks Project was even bigger, authorizing 11,000 miles of fuel breaks in April of 2020. The selected alternative authorized wiping out 121,000 acres of woodlands. And for what? A federal review of the science found inconclusive benefits from fuel breaks constructed throughout the West over the past five decades. In effect, these are make-work projects that, while causing significant ecosystem destruction and habitat fragmentation, have little or no benefit in reducing the extent or intensity of fires.

Fuel breaks are but the tip of the deforestation iceberg. In January 2021, during the twilight of the Trump presidency, a program called “Fuels Reduction and Rangeland Restoration for the Great Basin” was completed. Under this plan, more than 26 million acres would be targeted for a variety of environmentally destructive projects euphemistically labeled “vegetation treatments” as if the native vegetation is somehow sick. “Targeted grazing” is one such treatment authorized, even though a federal court ruled that livestock grazing actually increases the spread of flammable cheatgrass, instead of reducing fire risk, after hearing expert testimony on both sides of the issue. Pinyon-juniper woodlands would bear the brunt of the projects, facing chainsaws, chaining with bulldozers, and herbicides. Some 3,088,468 acres of pinyon-juniper woodlands are now scheduled for “restoration treatments.” The Administration pre-approved this massive program habitat destruction under a single Environmental Impact Statement, which could allow the agency to approve future projects without analyzing the site-specific impacts, or perhaps even public notification.

The drive to get rid of pinyon and juniper woodlands began several years ago. Senators Hatch and Heinrich slipped a rider into the 2018 Farm Bill instructing the Bureau of Land Management to create a “Categorical Exclusion” exempting pinyon-juniper logging and chaining projects of up to 4,500 acres from having to go through environmental analysis otherwise required by the National Environmental Policy Act. This legislation was pushed by sportsman groups, spearheaded by the Mule Deer Foundation. Western Watersheds Project and other conservationists warned that pinyon-juniper removal was bad for wildlife – including mule deer – but these warnings were ignored by Congress. Ironically, several months after Hatch-Heinrich passed, a new scientific study was published demonstrating that pinyon-juniper woodlands were an essential habitat component for mule deer, and that juniper removals have a negative effect on the species.

Then the Trump administration took it a giant leap farther, authorizing that pinyon-juniper removals as large as 10,000 acres could be approved under a Categorical Exclusion.

Cutting down juniper woodlands is often promoted as a method to create or improve habitat for the imperiled sage grouse, which requires undisturbed sagebrush steppe habitats and avoids trees of any kind. While juniper removal might seem to make sense, the reality is that logged-off juniper woodlands seldom result in sage grouse habitat. Mature and old-growth stands of junipers typically have very little understory at all, neither sagebrush nor native grasses. When bulldozers and other heavy equipment move in and the trees are torn down, what you get is disturbed bare ground. It’s the perfect breeding ground for the non-native invasive weed, cheatgrass.

If the goal is fuel reduction, cheatgrass infestations are the worst possible outcome. When livestock add their impacts into the mix (as they almost always do), suppressing native bunchgrasses and breaking up fragile soil crusts, cheatgrass proliferates. Highly flammable, cheatgrass predictably dies each July (escaping the drought stress of high summer in seed form). Drying out, it creates the perfect tinder for fires to burn, and those fires wipe out sagebrush and other fire-intolerant shrubs creating a monoculture of cheatgrass that fuels a cycle of frequent wildfires in perpetuity.

There is a widespread myth that pinyon pines and juniper are an “invasive species” that are unnaturally expanding their range as a result of human activities like fire suppression or heavy livestock grazing. The reality is that these woodlands have been expanding and contracting for thousands of years in a natural cycle, following changes in precipitation patterns.

In addition to mule deer, there are a number of other native wildlife species that benefit from pinyon-juniper woodlands. Scott’s oriole, juniper titmouse, and Bewick’s wren are a few of the songbird species that are considered juniper obligates. Pinyon jays are pinyon obligates, as their name suggests. Obligate species are animals that require a specific type of habitat to sustain their populations.

As for the climate impacts, when you replace juniper woodlands – or sagebrush-bunchgrass steppes – with cheatgrass, it reverses the enormous carbon sequestration capability of western desert shrublands, hemorrhaging soil carbon into the atmosphere. We typically think of forests as the most important carbon immobilizers, but desert shrublands can pull even more carbon out of the atmosphere and safely lock it away in the soil.

The removal of pinyon-juniper woodlands across the American West draws a direct parallel with rainforest destruction to create livestock pastures in the Amazon Basin. It’s all about the fool’s errand of trying to mow down native ecosystems and replace them with idyllic grassy pastures ideal for adding pounds and profits to beef cattle. Nevermind that cattle are ill-adapted to arid environments, and do so poorly on western public lands that the vast acreage dedicated to beef production on western federal lands amounts to little more than two or three percent of the nation’s beef production. Even if western public lands had no recreational value to the Americans for whose benefit they are supposed to be managed, the carbon sequestration value of juniper woodlands would still eclipse the scanty private profits that are wrung from marginal western livestock operations. Climate change is a serious problem, not least of all for the arid West now struggling with protracted drought and decreasing water availability. Let’s stop making it worse by cutting down the fragile woodlands that hold the carbon in place.