Since its first case was diagnosed 12 months ago, PNG has avoided a large number of reported cases and corresponding deaths. That situation has changed dramatically. Image: The Conversation/www.shutterstock.com

The covid epidemic in Papua New Guinea has significantly accelerated, judging by the available reports of case numbers.

Since its first case was diagnosed 12 months ago, PNG has avoided a large number of reported cases and corresponding deaths. That situation has changed dramatically over the past fortnight. A crisis is now unfolding with alarming speed and the response must quickly match it.

Australia can be proud of its preparations to support PNG and the region in responding to covid-19, especially its preparations to support vaccination in the region. These include contributing A$80 million to COVAX, $523m to the Regional Vaccine Access and Health Security Initiative, and $100m towards a new one billion dose covid-19 vaccine initiative together with the United States, India and Japan (the “Quad” group of nations).

As good as they are, these plans are unlikely to be fast enough to stop this current surge before enormous damage is done. There’s simply no time to waste in responding.

Why the urgency?
Reported covid-19 testing rates remain critically low, with just 55,000 taken from an estimated population of nine million people. This means we don’t yet have a precise picture of the scale of the epidemic.

The reported numbers are highly concerning. In the first week of March, 17 percent of all people who were tested throughout the country were positive to covid-19, with over 350 newly confirmed cases.

This is the highest number of cases in a single week in PNG since the start of the pandemic. Over half of PNG’s 22 provinces reported new covid-19 cases in that week.

There are other indicators of a potential large scale outbreak, such as reports of increased cases among health-care workers. What’s more, the total number of documented covid-19 deaths in PNG has nearly doubled in the past fortnight alone.

Low testing rates, combined with reports of high daily case numbers, means there are likely many thousands of current cases in Port Moresby and widespread seeding and spreading of infections throughout the country.

PNG’s hospitals and front-line health-care workers remain particularly vulnerable. With limited public health controls in place and an effective vaccination program yet to be initiated, and with last week’s huge commemoration ceremonies for Grand Chief and former Prime Minister Michael Somare, there’s every chance the current outbreak will continue to grow exponentially for some time yet. 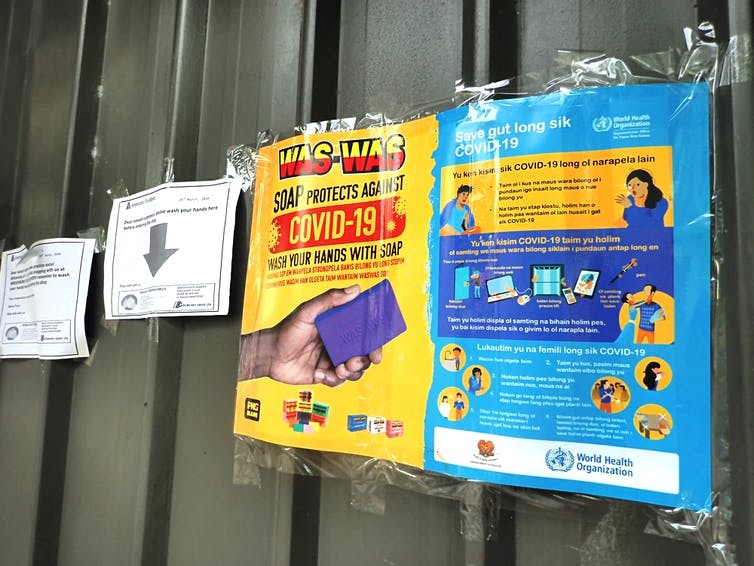 The people of PNG now face dual health emergencies: death and disease from covid-19 itself, and a likely increase in existing major diseases barely held in check by the nation’s already stretched health system.

These indirect effects, such as potential rises in malaria, tuberculosis, HIV, cervical cancer, vaccine-preventable diseases and poor maternal and newborn health, are likely to be even worse than the direct impact of covid-19.

Australia and PNG’s vital partnership
This health crisis should be reason enough for Australia to respond urgently in support of PNG. But there’s another reason too. High levels of circulating SARS-CoV-2 in the Asia-Pacific region are a recipe for generating mutant coronavirus variants that might spread more readily, evade immunity more easily, and/or cause more serious disease.

A regionally coordinated effort to combat covid-19 will help ensure protection for everyone, including going a long way to help preserve Australia’s own vaccine program.

PNG already has a coordinated national and provincial covid-19 response and a vaccine technical working group that has begun planning for deployment of the first allocation of vaccines to frontline health-care workers.

Meanwhile, Australia is also playing a crucial role in supporting this effort, contributing generously to the COVAX vaccine access facility and to a A$500 million fund to support covid vaccination in PNG and the wider Pacific.

However, these plans were developed on the basis there was substantially more time for planning, deployment and phased rollout than the current case numbers would suggest.

This “emergency package” could conceivably involve:

Arguably the most important element of this would be immediate vaccination for health-care workers in the most heavily impacted areas of the country. Ideally, all of PNG’s crucial health-sector workforce should be vaccinated within the next fortnight. Australia could provide around 20,000 vaccine doses for health-care workers without putting a significant dent in its own vaccine supplies, potentially making a profoundly important intervention in the course of the epidemic in PNG.

This is the moment for dialogue to occur between the two nations, so PNG can ensure Australia’s help with such an immediate and ambitious response.

PNG is Australia’s closest geographical neighbour, and our countries have a deep shared history of mutual support. An out-of-control COVID-19 epidemic in PNG would be a humanitarian and economic disaster for the nation itself, and a grave threat to the health of the region, particularly with shared borders to Solomon Islands in the east and Indonesia to the west.

Given this pandemic expands at an exponential rate, and with new variants of concern arising regularly in regions of high transmission, it’s the speed of a strong response that matters the most. A rapid public health intervention, to be supported and facilitated at the highest levels of government, would go a long way to mitigating what may well become a public health catastrophe.