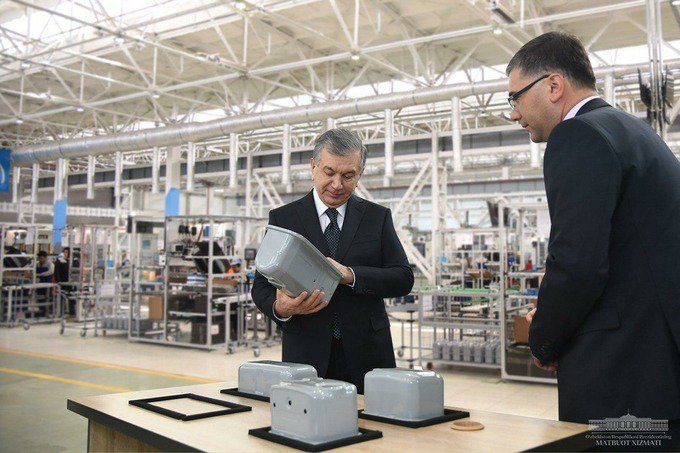 A few weeks before city officials’ ominous visit to Altromark, the Tashkent authorities set up a new fully-owned manufacturing company, Texnopark LLC. This company was established to produce gas meters, set to be rolled out as part of a 2017 government initiative to introduce new smart meters across Uzbekistan.

An investigation by RFE/RL’s Uzbek service found that, despite no previous experience, Texnopark LLC was selected in April 2020 to supply 3.5 million Osten brand gas meters to homes across Uzbekistan – a tender worth $555 million.

Uzbekistan’s intellectual property register confirms that the Osten brand is registered to Artel Engineering and Management and the J-United Group – the latter’s shares are fully owned in a private capacity by Artikhodjaev, Tashkent’s mayor. According to RFE/RL, the current head of Texnopark is a former manager of another company reportedly controlled by Artikhodjaev.

This is where Altromark comes in. Aside from wheelchairs, since 1996 Altromark has expanded into the production of gas and water metering devices, at the invitation of the Uzbek government. According to the company, drawing on industry-leading technology, Altromark has produced 300,000 gas meters without complaint.

This has placed Altromark in the awkward position of having to appeal for compensation to city authorities in the same line of trade and a mayor who is the founder of a much larger commercial competitor – one that is often caricatured on Uzbek social media because of its market dominance.

Previously, Artikhodjaev has stated he has no role in the day to day management of Artel, and that his private corporate interests do not present a conflict of interest with his political role.

In late 2019, the Uzbek state anti-monopoly committee announced that Texnopark’s tender award had violated laws on public procurement and competition, and should be reopened.

However, the tender was awarded once again to Texnopark. What’s more, RFE/RL discovered that the second-choice company was also connected to Artikhodjaev’s Akfa-Artel conglomerate.

In a video recording of a meeting on 21 November 2019 between Altromark and the Yashnabad district head, the latter says that the compensation issue will be resolved and that Altromark will be given land on which to set up a new factory. According to Altromark, Artikhodjaev allegedly confirmed this in a meeting later that day, and once more in a telephone call. Altromark said that it does not have a recording of the meeting with Artikhodjaev, because it agreed to turn off its cameras beforehand.

In what the company says contravenes the agreement reached on 21 November, Artykhodjaev then issued a decree capping compensation at 18 billion soum ($1.75 million). The mayor also refused to provide Altromark with an alternative site for its factory.

Alexksandrov said that he believed the verbal assurances that he claims were given on 21 November 2019. “After meeting the person who runs the capital of an independent state, it is hard to imagine that they will lie to you,” he said.