Dust and air pollution from particulates is a threat to the health of nearby residents. Photo George Wuerthner.

On March 18th, the California Coastal Commission appeared to settle a long-simmering dispute over Thrillcraft use of the Oceano Dunes Vehicular Recreation Area near Pismo Beach, California.

For forty years, the Coastal Commission has been arguing with the California State Parks and Recreation that thrillcraft jeopardized the area’s natural values, including the destruction of nests of endangered least terns and snowy plovers. There are ten species within the Park listed under state or federal laws that the Park agency is obligated to protect. 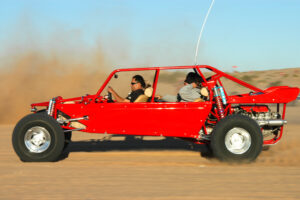 But with thousands of dune buggies, dirt bikes, 4WD pickups, and other motorized thrillcraft tearing up the beach and dunes, protection of plants and animals is not among the Park’s priorities.

The conflict was brought to a head this past year when the California Coastal Commission issued a cease-and-desist order to park agency.

At their March meeting, the commission voted 10-0 to approve the state park’s coastal permit on the condition that ORVs are eliminated. The Park has until 2024 to comply with the order.

Oceano Dunes State Park is one of nine state-run thrillcraft parks under the California State Parks and Recreation jurisdiction, but the Oceano Dunes is the only one that borders the Pacific Ocean.

There is tremendous opposition to the ban on ORVs (Off-Road Vehicles) from motorized advocates and the Oceano Dunes State Park itself.

One may wonder why a state park would be an advocate of motorized recreation? The answer is money. About 1.5 million people visit the Park each year, with thousands of all-terrain vehicles a day motoring across 3,600 acres of sand. 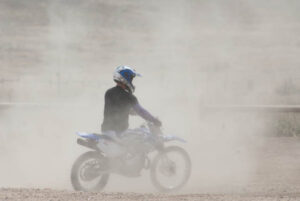 The Park gets to keep the gate receipts from these visitors, off-road receipts: license fees from the vehicles, and also enjoys financial funding from a gasoline tax that is also used to promote motorized recreation. Compared to other state parks in the California system, Oceano Dunes is well funded. For instance, the Park received $6.3 million in 2017-2018, by far the most significant amount of any of California’s most popular state parks

The Coastal Commission, for its part, says continued ORV use of the area violates its mandate to manage public recreation on coastal land “consistent with sound resources conservation principles.” Given the importance of this area for endangered species and other wildlife, the commission felt it had no choice but to suspend ORV use of the site.

There were other issues as well. Nearby communities complained about the dust and noise from the tens of thousands of users that can pack into the Park. At times the nearby towns have some of the worse particulate pollution in the nation. These communities must deal with increased crime levels, respond to more than 5,800 emergency calls, numerous accidents, including six deaths. Park Rangers in one recent year made 49 felony arrests and had to respond to a mass shooting when a gunman opened fire with a semi-automatic weapon injuring five people.

Some locals also argue the ORV use of the Park is a social justice issue as well. The nearest community to the Park, Oceano Dunes, is 60% Latino, and many live near the poverty line. Residents argue they get the noise, air pollution, and crime but cannot enjoy the beach out their door. State and federal air pollution standards are violated dozens of times a year. A recent court decision agreed that the air pollution from park activities was a significant health risk. 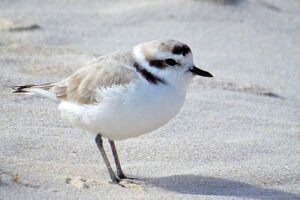 The snowy plover is a ground-nesting bird vulnerable to trampling under the wheels of vehicles. The Park is home to about 200 breeding adults of the birds, whose prime habitat all along the coast has succumbed to residential development and human disturbance. Recovery plans for this beach segment call for a minimum of 350 breeding adults.

In response to a 2004 lawsuit from the Sierra Club, the Park agreed to produce a management plan to protect endangered species.  It took the Park sixteen years to pull together a draft plan that conservationists say fails to protect the birds. Indeed, among other proposals, the plan would decrease the area available for nesting plovers.

During the Covid virus, when the Park was closed, the snowy plovers expanded their use of the dunes into areas “reserved” for thrillcraft. In response, Park officials moved or chased the nesting birds back to “their” allotted habitat. Such actions violate the federal Endangered Species Act, which prohibits harassing or harming protected species.

Frustrated members of the environmental community, nearby towns, and the Coastal Commission say the Park has done nothing but stall and renege on promises.  According to a quote in Calmatters, the parks agency has “no regard for the Coastal Act or coastal resources,” said Mary Shallenberger, a former chair of the Coastal Commission who was with the agency from 2004 to 2017.

The Fish and Wildlife Service has repeatedly threatened the Park with legal consequences for its violations of the Endangered Species Act but has never taken the Oceana Dunes State Park to court.

However, the Off-Roaders complain that they are the endangered species. They argue closure of the beach and dunes violates their rights.  Vandalizing public property is, apparently, considered a “right” by some.

Part of the argument supporting the area’s continued use is a recent Park economic study found that ORV users contributed more than $273 million to the local economy. However, that study was criticized by other economists. There is no dispute that the millions of visitors have an economic impact on the regional economy.

Nevertheless, both the federal Endangered Species Act and the Coastal Commission mandate require them to protect listed species like the snowy plover and least tern no matter what the economic consequences might be. Plus, it is not a win-lose situation. Less vehicle traffic would make the Park attractive to other recreational users who would spend money as well.

There is an interesting political angle to the entire controversy. California Gov. Gavin Newsom (D) is battling a recall effort that was launched in June of 2020, claiming the governor exceeded his authority with regards to restrictive Covid 19 closures and mandates, as well as other complaints such as his alleged lack of attention to dealing with homeless people (i.e., not getting rid of them). If sufficient signatures are verified, the governor will face a recall election.

The last thing Newsom wants is another controversy to propel disgruntled voters to the polls. Some suggest the three-year grace period offered by the Coastal Commission for the final termination of ORVs in the Park was partly a way to defuse anger over the Park ORV ban so it would not be an election issue.

Opponents of the motorized vehicle ban on ORVS say they will file a lawsuit, and who knows how that may turn out or delay the final implementation of the thrillcraft ban. Meanwhile, environmental organizations like the Center for Biological Diversity are also watching to see if the ban is implemented as promised or they will seek legal action.

Though it is a long time coming, it is good to see that the Coastal Commission is willing to stand up to the Oceano Dunes Park and thrillcraft advocates to defend the public’s wildlife and natural areas. We need more public agencies who take their mission to protect the public interest seriously.