At local and national levels, the initial media response focused primarily on the gunman’s story and police statements. Reports linked the targeted businesses to sex work with insubstantial documentation, but struggled to identify if and how race and gender motivated the gunman.

The Atlanta Journal-Constitution’s report (3/17/21) began with a large photo of the gunman, citing several statements from him without questioning the reliability of his narrative. The shooter claimed that the targeted businesses were the types he frequented and “a temptation he wanted to eliminate,” without explaining what that meant or how it could possibly justify eight murders. Most of the article described the police investigation.

The Journal-Constitution also printed Cherokee Sheriff Captain Jay Baker’s news conference statement describing the shooter as “pretty much fed up and had been, kind of, at the end of his rope. And yesterday was a really bad day for him, and this is what he did” without questioning that statement, though his comments have since been deleted from the article following public backlash. 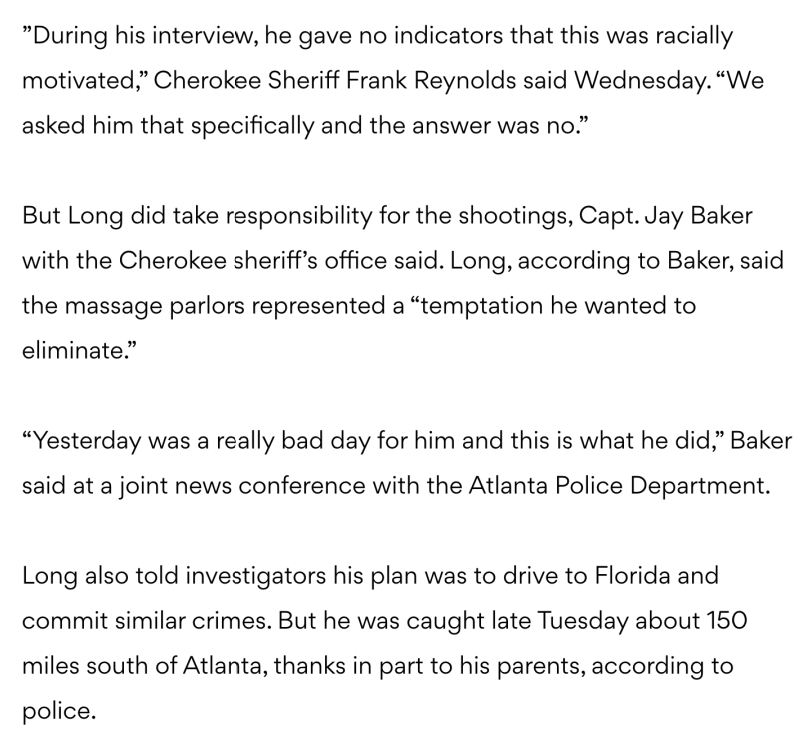 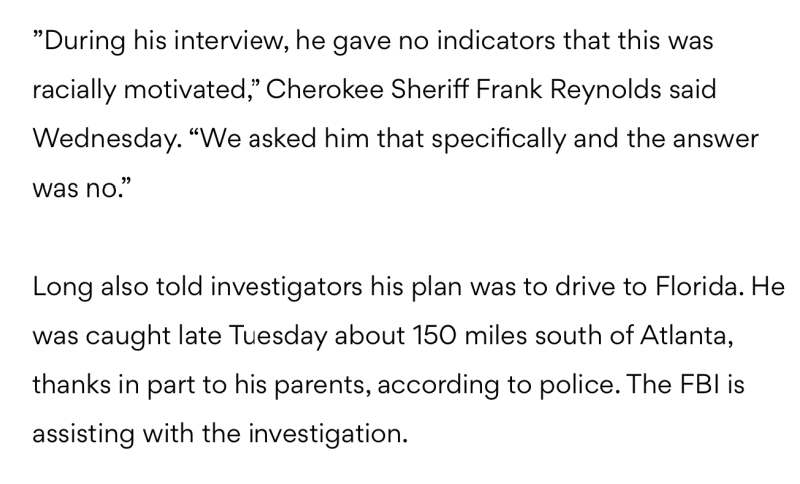 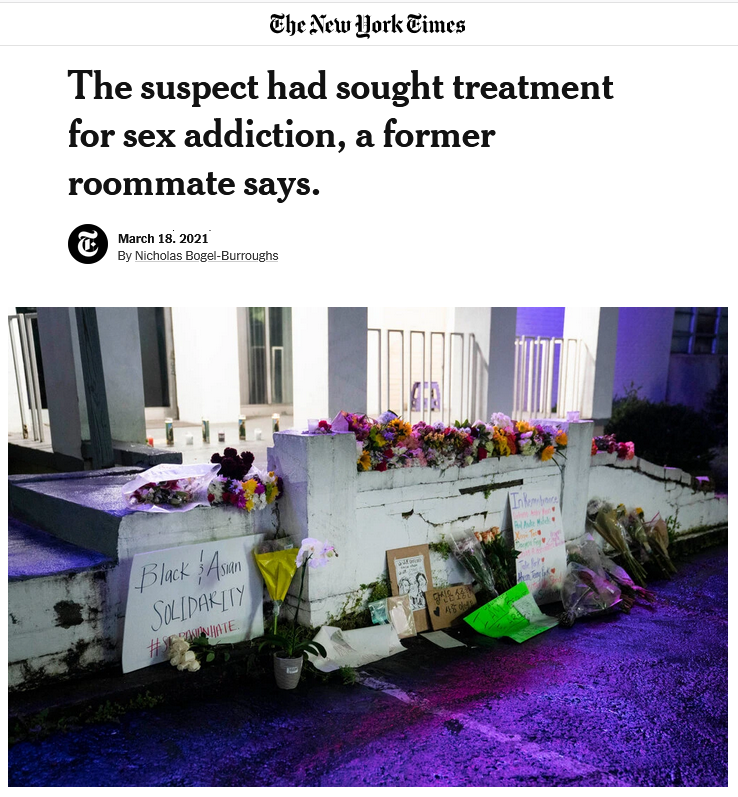 ABC News (3/17/21) begins with the shooter’s statement to police that he “has a sex addiction,” includes interviews with multiple police departments and refers to his sex addiction multiple times. Cherokee County Sheriff Frank Reynolds said the shooter may have “frequented these places in the past,” without explaining what “these places” are or presenting evidence for why he thought the targeted businesses were “these places.” The article mentions the shooter targeting “some kind of porn industry,” without explaining what that has to do with the targeted spas. Though the report discusses fear of violence among Asian Americans, the only Atlanta-area community member interviewed was a neighboring business owner who is not Asian-American.

The BBC’s report (3/18/21) said officials could not confirm if the attacks were racially motivated, and stated the shooter’s claim of having a “sex addiction.” The first section of the report is “What did police say?” The Daily Beast’s full profile of the gunman (3/17/21) included an interview with an anonymous source who described him as “very innocent seeming and…big into religion,” and included interviews with his youth pastor, and several police statements. CNN (3/18/21) interviewed his grandmother and dedicated an entire section to the shooter being “distraught” and “tortured” by his “sex addiction,” and “emotional” due to family strife.

Though coverage universally noted the race of the victims and anti-Asian racism, reports presented the shooter’s claim that “the crimes were not racially motivated” multiple times without questioning the reliability of this claim, or providing the context that race and gender can still be contributing factors even if that isn’t explicitly conscious in the mind of the perpetrator.

Overall, English-language corporate media parroted the law enforcement narrative while omitting an eyewitness account that would have countered it. Korea Times Atlanta (3/18/21), a local Korean-language newspaper, published a Gold Spa employee’s report that the gunman’s racial motivation was clearly expressed (translated from Korean):

Gold Spa Employee A contacted four nearby Korean-owned businesses to warn them and stated that the perpetrator stated that he will “kill all the Asians” before shooting.

Most media outlets—AP (3/17/21) was a notable exception—did not investigate the definition or validity of “sex addiction.” It is not recognized as a mental health disorder, nor are there any known correlations between sex addiction and violence.

The New York Times (3/19/21) has since reported sex work-related arrests at Gold Spa between 2011 and 2014. However, these were arrests of individuals and not an indictment of the business itself. The end of the report mentions “it is unclear who owned the spa at the time of the arrests” 7-10 years ago, but the sensationalist headline, and the earlier focus on the murders and shooter’s “sex addiction,” nevertheless impute criminality. The concluding paragraph also connects the spa to human trafficking without presenting evidence:

Several of the reports show that the women who were arrested had listed the spa as both their work and home addresses. Human trafficking advocates have said that women who work at illicit Asian massage spas are often coerced into performing sexual work, and live in a state of essential indentured servitude.

Even after the swift public censure of the initial  media response, investigative reporting focused on trying to connect the targeted businesses with sex work and trafficking, rather than following up on the Korean-language lead related to the racial motivation of the shooter, or seeking out Asian-American witnesses in the community. 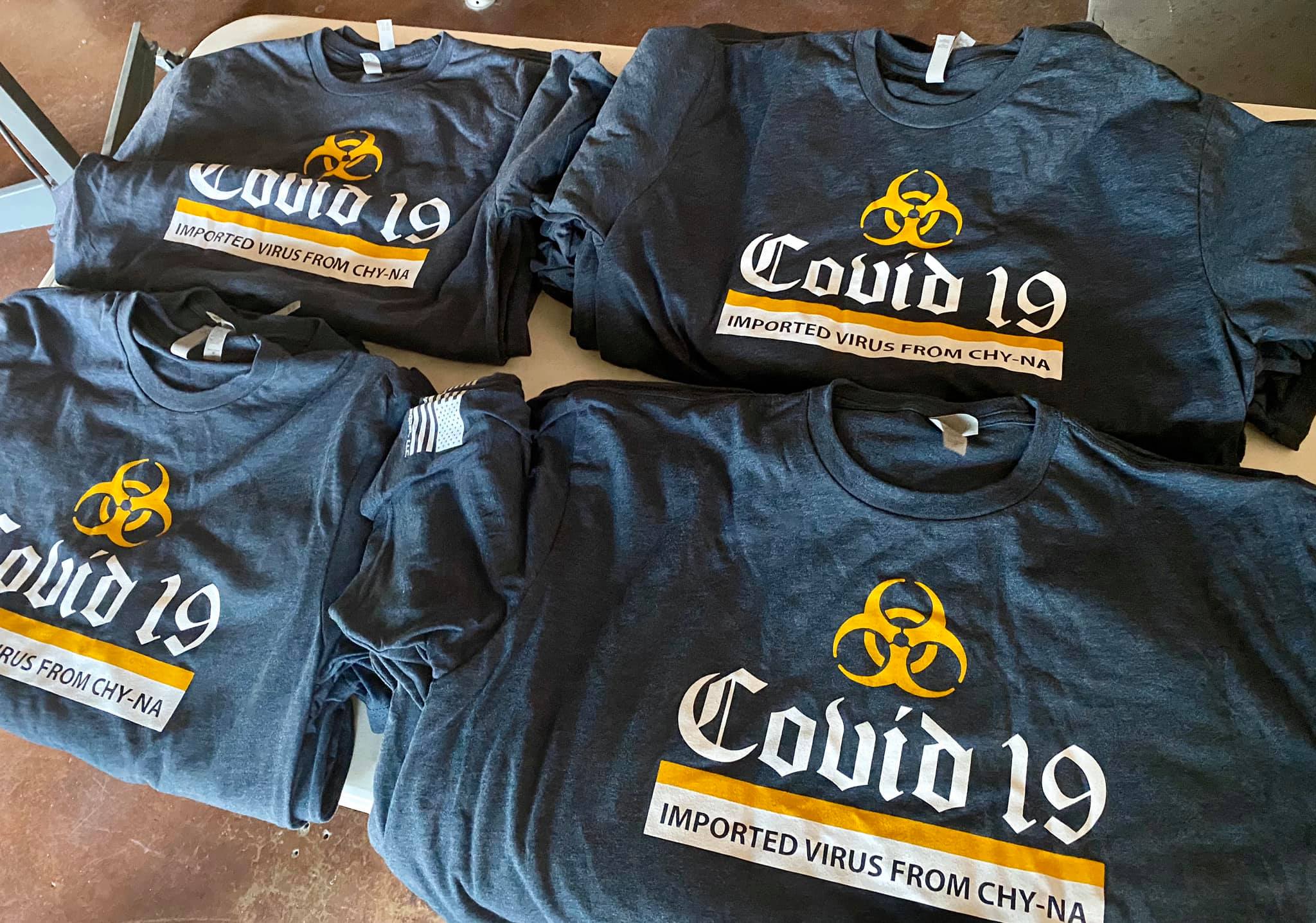 The overreliance of media on police reports and statements to report on crimes (FAIR.org, 10/10/18, 7/11/16) too often makes crime reporting a mouthpiece for law enforcement who are demonstrably biased.

Rich Phelps identified a Facebook post in which Captain Jay Baker posted his purchases of shirts that say “COVID 19/Imported Virus From CHY-NA.” The next day, the Daily Beast (3/18/21) identified that Baker bought these shirts from a former Cherokee County deputy.

One major facet of anti-Asian racism is the association of Asians with infectious disease. Chinese immigrants have long been medical scapegoats in the West, blamed for various 19th century epidemics. Sinophobic and racist COVID-19 reporting is a continuation of centuries of this scapegoating.

The New York Times ran months of racist, Sinophobic, inaccurate reports on COVID-19, many of which FAIR critiqued. These include a piece (1/28/20) citing bats sold in “wet markets” as the source of the virus, a claim that has since been debunked by scientists; an op-ed (2/20/20) that referenced Confucius and pushed the racist trope that torturing and eating wild animals is an integral part of Chinese culture; and an article (3/18/20) that called China the “authoritarian incubator of a pandemic,” supporting White House efforts to deflect blame away from its own poor handling of the outbreak. This perception of Chinese people as a contaminant is reflected in the biohazard symbol imagery of Baker’s shirt.

Baker’s racism shouldn’t be surprising, given the long, documented history of police racism in the US. Many police departments in the US dismiss sex worker murders and rapes, labeling them as NHI, or “no human involved.” It is a racist, sexist and classist term used to describe crimes against victims not worth investigating. Transgender, undocumented migrants, and women of color are especially at risk of sex work-related police suspicion and police violence.

The connection of Asian women to sex work, particularly sex trafficking, has a long history as a tool for race-based immigration exclusion of Asians in America. Since the 1860s, exploitative and orientalist journalism paired the morality of slavery abolition with the language of infectious disease to racialize Asian women as both complicit sex slaves and temptresses who would infect and corrupt white, Christian America with their “moral racial pollution” of illicit sexuality. This enabled public support for morality- and conduct-based legislation, like California’s Anti-Prostitution Act of 1870, to target Asian women and prevent Asian immigrants from forming families and establishing communities in the US.

Eventually, these racist popular beliefs enabled the passage of the Page Act of 1875, the first federal law regulating immigration, which was used to bar immigration of Chinese women and set the legal precedent for later race-based immigration exclusion, like the Chinese Exclusion Act of 1882, which ended the import of all Chinese labor; and eventually to the Barred Zone Act of 1917, which expanded the immigration ban to include a variety of East Asian, Southeast Asian, South Asian and Polynesian nations. They were perpetuated by decades of US imperialism and militarism, and today, the trope of Asian women as trafficked sex workers is used to police and deport immigrants.

The assumption that all Asian spa workers are sex workers, combined with existing police bias that sex workers “are no longer considered a part of the human race,” also contributed to the police dismissal of the murder victims. In the context of NHI, the implication is that it is fine to kill these particular people because they’re not really considered people.

Reports that framed the victims positively disassociated them from sex work, reinforcing the belief that sex work is shameful (USA Today, 3/18/21;  Yahoo!, 3/19/21). Yahoo!’s report characterized one victim as “very invested in becoming an American,” which reinforces the perception that Asians are perpetual foreigners. These women are deserving of sympathy and respect regardless of their work or desire to assimilate.

Defaulting to law enforcement narratives is especially harmful when it involves reporting on crimes that may meet the requirements qualifying for a hate crime charge. Hate crime legislation is a legal designation that varies state by state, with what protected classes are covered and what the criminal penalties involve. Three states have no hate crime laws at all.

The strict legal and evidentiary requirements to charge an offense as a hate crime should not be conflated with whether a perpetrator had racist or other bigoted intent, or if they acted based on implicit biases. But this conflation is exactly what has happened with crime reporting relying on law enforcement, and has perpetuated a pattern of reporting that downplays racial motivation in a crime until law enforcement makes an explicit legal determination. 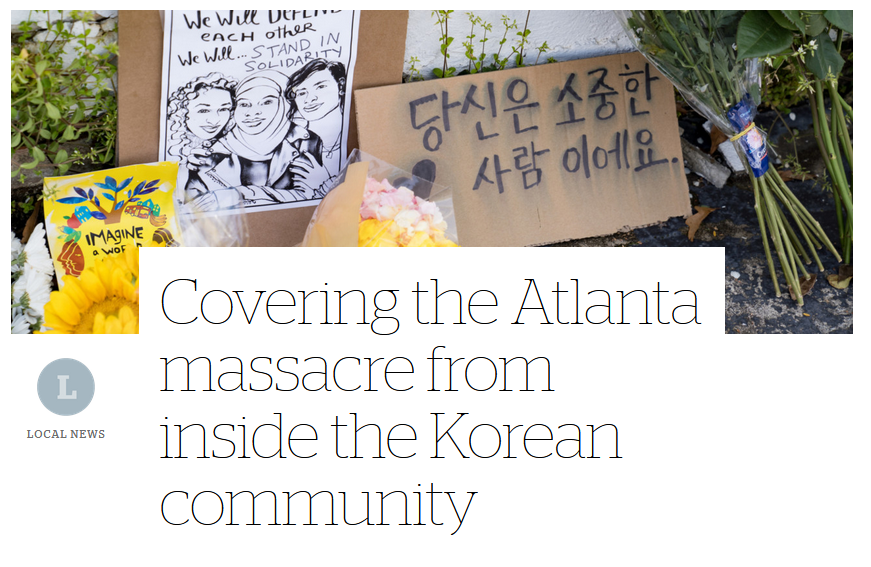 Reports such as those in USA Today (3/18/21), Yahoo! News (3/19/21) and the Daily Beast (3/19/21) are beginning to center the victims’ families and stories, but to date, the authors have not seen any reports in English-language media outlets interviewing the Gold Spa employee eyewitness, anyone from the four businesses he contacted, nor anyone from the Korea Times Atlanta who have information directly related to the case.

Columbia Journalism Review (3/23/21) interviewed Sang Yeon Lee, President of Atlanta K, another Korean-language news outlet in Atlanta. He noted that the public may never know their stories due to the initial media stigmatization:

Survivors, who have long lived under the radar—fearful of losing their livelihoods and immigration statuses—feel discouraged from talking publicly. “Unless they have immense courage, it’s improbable for these women to want to put themselves out there,” Lee says.

Media that  relied on law enforcement sources perpetuated police biases and downplayed the racial motivation of the Atlanta murders. This then led to further omission and silencing of the vulnerable Korean frontline workers of the Atlanta community, even as media spotlights anti-Asian racism in America more generally nationwide.

Moreover, the Asian American Journalists Association released a statement (3/18/21) about Asian journalists being sidelined in reporting on these events:

Since the shootings, we have heard some deeply concerning problems in newsrooms across the country, including in Atlanta.

“Are you sure your bias won’t show if you cover the Atlanta shootings?”

“You might be too emotionally invested to cover this story.”

Empowering the journalists who have the cultural competency and language skills needed to cover Asian communities would have led to richer reporting and a fuller narrative of what happened on March 16. Journalists with the expertise to understand the context of racialized misogyny would be better equipped to avoid normalizing the racism and sexism that reduced Asian women to sexuality as a form of dehumanization. Instead, reporters spoke with more police departments than Asian witnesses, and we are left with the statement of the shooter who had just confessed to murder: “The crimes were not racially motivated.”

* In the press release disclosing the victims’ identities, the medical examiner’s office mistakenly abbreviated the second syllable of the Korean women’s names as though they were middle names, rather than part of their first names. News outlets initially passed on this misnaming.