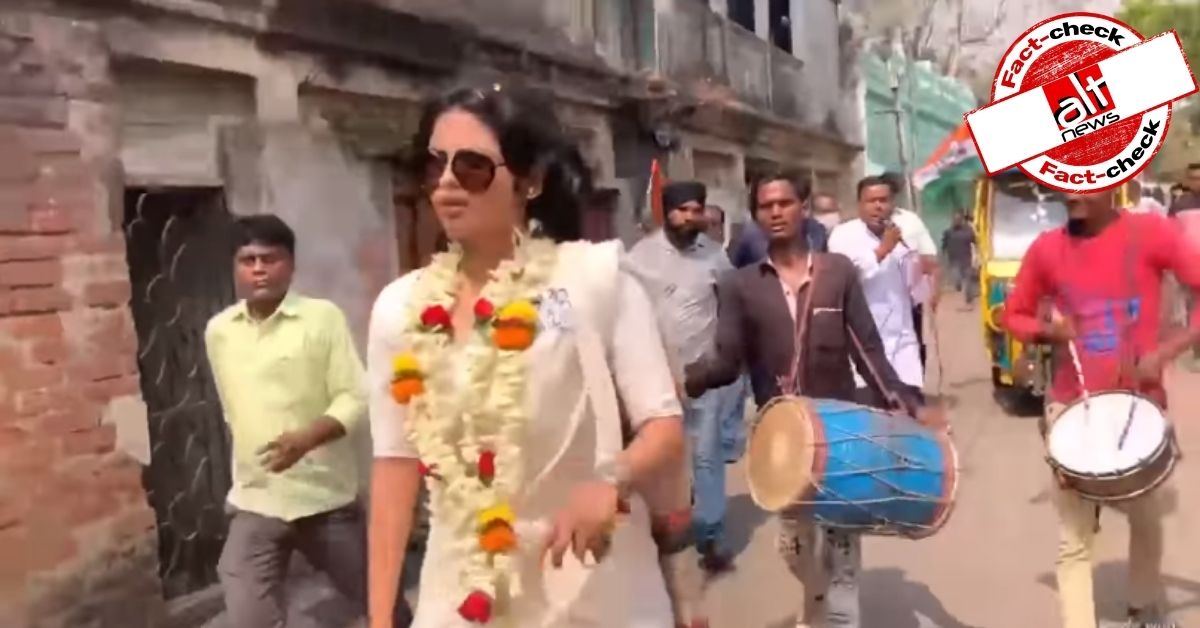 A video of TMC candidate from Asansol Dakshin, Saayoni Ghosh, running during election campaigning in Burpur is widespread on social media. It has been claimed that she was running after being harassed by TMC workers. OpIndia penned an article on the video citing ETV Bharat as the source.

Bengal: Actress Saayoni Ghosh, TMC candidate from Asansol, forced to run after being harassed by her own party membershttps://t.co/jT9qXE3xBR

She is Sayani Ghosh, TMC MLA Candidate who had picture of condom on Shivling. She is running after getting harassed by her own part workers. pic.twitter.com/UrGDA6kxgl

She is Sayani Ghosh, TMC MLA Candidate who had picture of condom on Shivling. She is running after getting harassed by her own part workers.

Alt News spoke with Saayoni Ghosh on WhatsApp and was told, “My movement isn’t remote-controlled by people sitting in Delhi. I take care of my own campaign and decide for myself. BJP is losing plot hence engaging in fake and frivolous comments.”

Ghosh had herself uploaded the video of election campaigning in Burnpur on March 22. She can be seen running and meeting people from 2:40 onward in the video below.

There are in fact numerous videos of the TMC candidate running during campaigning. The one below is captioned, “My feet my will”.

Several media broadcasts have also covered her ‘running for election’ campaign in Asansol.

OpIndia referred to ETV Bharat’s report to assert that Ghosh was being harassed by party workers. However, the report carries no such claim. ETV Bharat said that she ran because she was agitated with party workers and supporters gathering close to her. It is to be noted, however, that Ghosh neither stated this to us or The Logical Indian (TLI) that had earlier published a report on the viral claim. “I am a young politician who wants to meet as many people in my constituency as I can. So I run to cover distances so that I can meet more people,” she has been quoted saying in TLI.

A false claim that TMC candidate and actor Saayoni Ghosh was running during election campaigning in Asansol after being harassed by party workers is circulating online.

[1] TMC candidate Saayoni Ghosh runs after being harassed by party workers ➤ https://t.co/jT9qXE3xBR[2] OpIndia.com on Twitter: "Bengal: Actress Saayoni Ghosh, TMC candidate from Asansol, forced to run after being harassed by her own party members https://t.co/jT9qXE3xBR" ➤ https://twitter.com/OpIndia_com/status/1373972521377169409?ref_src=twsrc%5Etfw[3] Facts on Twitter: "She is Sayani Ghosh, TMC MLA Candidate who had picture of condom on Shivling. She is running after getting harassed by her own part workers. https://t.co/UrGDA6kxgl" ➤ https://web.archive.org/web/20210326081945/https://twitter.com/BefittingFacts/status/1373996618421207054[4] No, farmer leader VM Singh whose net worth is Rs 600 cr is not Congress leader - Alt News ➤ https://www.altnews.in/fact-check-vm-singh-who-is-demanding-msp-for-farmers-holds-assets-worth-rs-631cr-is-congress-leader/[5] Images of charred idol of Hindu deity Kali in West Bengal viral with baseless communal angle - Alt News ➤ https://www.altnews.in/images-of-charred-idol-of-hindu-deity-kali-in-west-bengal-viral-with-baseless-communal-angle/[6] ➤ https://t.co/UrGDA6kxgl[7] ➤ https://twitter.com/BefittingFacts/status/1373996618421207054?ref_src=twsrc%5Etfw[8] Chayan Chatterjee on Twitter: "Trinamool candidate from Asansol Saayoni Ghosh , forced to run after being harassed by her own party members… " ➤ https://web.archive.org/web/20210326082157/https://twitter.com/Satyanewshi/status/1373983269591474178[9] ➤ https://www.facebook.com/dinesh.parikh[10] ➤ https://www.facebook.com/watch/?v=348418869875474[11] ➤ https://www.facebook.com/SaayoniGhoshOfficial[12] প্রচারে বেরিয়ে শাড়ির কুঁচি ধরে দৌড় সায়নীর ! ➤ https://react.etvbharat.com/bengali/west-bengal/videos/state/bengal-assembly-election-2021-asansol-dakshin-tmc-candidate-sayani-ghosh-runs-during-campaigning/wb20210322142421033[13] No, TMC Candidate Saayoni Ghosh Wasn't Running Because Her Party Workers Were Harassing Her ➤ https://thelogicalindian.com/fact-check/saayoni-ghosh-27560