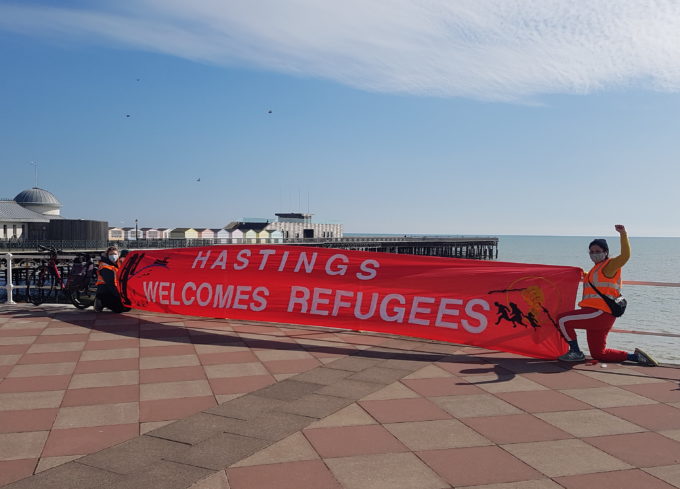 I’m seated in the police Zoom briefing with other council representatives for my small seaside town in England. Our Chief Inspector is telling us about the crisis we have with soaring heroin addiction in the town. The recent surge is contributing to a general increase in crime. The next section of the briefing is about the future use of police surveillance drones, and how they could become useful in combating crime.

A few months ago, Nigel Farage, a far-right politician, arrived in my town to film himself on our tourist beaches; aiming to drum up hate and hostility toward migrants and refugees arriving in the UK on precarious inflatables, having just traversed the channel of water between England and France. Farage complains that the new arrivals are taking up hotel spaces. He triggers the public by saying it’s all coming out of the public purse, we can’t afford to look after our own citizens let alone refugees, and these people will one day take their homes and jobs. The Home Office considers proposals to use water cannons on the migrant sea crossers, while Home Secretary, Priti Patel suggests the transportation of migrants and refugees to Ascension Island in the South Pacific, harking back to the 18th century, when Britain deported convicts to the penal colony of Australia.

The British Army Watchkeeper drone has been commissioned to help with surveillance of people crossing the Channel. The Watchkeeper was initially developed when the British military requested £1 billion to develop a military drone, and then awarded an Israeli arms company, Elbit Systems the contract to design and develop the drone. When completed in 2014, it was transported to Afghanistan for ‘field testing’.

Was a ‘field testing’ in Afghanistan part of the tragic mistake made when a U.S. weaponized drone killed my friend Raz Mohammed’s brother-in-law and five of his friends? The young men were enjoying an early evening gathering in their orchard in Wardak province Afghanistan. All the men were unarmed, none of them were involved with the Taliban. Their instant deaths were the result of a ‘signature strike’ – a targeted killing based on racial profiling, the men ‘fitted’ the demographic of the Taliban – they were wearing Pashtoon clothing, in a Pashtoon village, men of fighting age – that was enough to get them killed.

Our local Chief Inspector finishes talking about police surveillance drones. At present, in my area of  Sussex, they are mainly using surveillance drones for traffic and ‘operations’, though elsewhere in the UK they have so far been used to survey a Black Lives Matter protest and another at an immigration centre.

Knowing how I would come across to others in the Zoom room, I decided to take the risk of sounding like a ‘conspiracy loon’ and plunged in – I highlighted the military method of ‘racial profiling’ during surveillance and targeted assassinations, how the US police have started using drones armed with non-lethal weapons (tasers, pepper spray, rubber bullets) against their own civilians, often anti-war, environmental and anti-racist protestors. The chief inspector was a little taken aback but quickly started to respond that British police were not like the military or the US police, that drones are really useful for helping lost people on mountain tops, and that having a drone operator walking around town, while flying a surveillance drone, would be great for community engagement.

I suddenly recollect a fight which broke out in our town centre and wonder how a drone would have helped. Some sort of argument had arisen amongst the ‘street community’, a mixture of people who gravitate on the street to drink, to buy or take heroin and crack, or wait for their methadone subscription from the local rehab centre based above an arcade of shops which shadows the street community and the raucous outbreak. Shoppers walked past, some looking at the commotion, others head down, not wanting to inadvertently get dragged into a drug fueled hullabaloo. A young woman, weathered skin, tattered clothing, decaying teeth, aged beyond her years screams obscenities at another member of the community. Her gaunt face reminded me of people I’ve seen in Kabul who have become addicted to heroin, the people who live under a bridge, huddled in small groups, heads under a scarf as they cook up opium on a spoon. Their eyes are distant – friends and family say they are gone.

Heroin addiction in impoverished British towns has soared in the last 10 years. At the crime briefings I attend as a Councillor, no one ever talks about where this cheap high-quality opium has flooded in from, the root cause probably considered ‘too political’. But in reality, heroin supply to Britain has careened in the last decade, namely due to the ‘solar revolution’ in Afghanistan. This has enabled farmers to use electricity generated from solar panels to pump untapped water from 100 meters under the desert. Now, where there was once an arid dust belt, there are fields of thriving poppy, punches of colour lighting up the desert, too much of a lucrative cash crop for Afghan farmers to pass up.

Many of the newly blooming fields are in Helmand, the Afghan province where Britain was assigned to fight the Taliban. Britain was also delegated, at the 2001 International Bonn Conference on Afghanistan, the responsibility of counter narcotics in Afghanistan. Afghanistan was the first country in the world where weaponized drones were used – the U.S. used drones in the 2001 unsuccessful assassination of Osama Bin Laden. Thereafter, Afghanistan was used as a “playground for foreign nations to kill Afghans like a video game” – as one of my young Afghan friends once described to me. It’s highly unlikely British Intelligence Agencies were unaware of the newly blossoming poppy industry, much of which is growing in Helmand, a ‘hotspot’ for drone strikes and aerial surveillance. Today Afghanistan produces 90% of the worlds’ heroin, 3% of the Afghan population are addicts, and production of the crop has more than doubled, from 3,700 tonnes in 2012, to 9,000 tonnes in 2017.

And so, in my home town, deprivation, crime, conflict and all the ills associated deepen. Drones are sent in to ‘solve’ the problem. To date, at least 40 UK police forces  have either purchased a drone or have access to using one. In the area of Sussex and Surrey, there are 23 drones and, according to a recent Freedom of Information, they were used 108 times between January- June 2020.

Afghans are amongst the refugees washed up upon our beaches in flimsy dinghies, their channel crossing overseen by the very same Watchkeeper drone used to exacerbate war which drove them from their homeland. The most vulnerable in our society, from Britain to Afghanistan, are seized by the scourge of heroin and the conflagration of violence caused by war. The vaunted “eyes in the skies,” the surveillance drones, won’t help us understand these realities. The proliferation of weaponized drones will unleash more misery.

Momentum for campaigns to ban land mines, cluster bombs and nuclear weapons began with grassroots efforts to tell the truth about militarism and war. I hope a surveillance drone will get the message painted on large banners we’ve held, standing along our seacoast, proclaiming a welcome for refugees and a longing for peace.