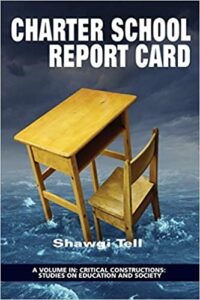 Advocates of privately-operated non-profit and for-profit charter schools have long ignored serious criticisms of charter schools in a variety of ways. They have always believed, for example, that simply repeating worn-out phrases like “charter schools provide choice” will automatically cause everyone to dismiss the need for any discussion, investigation, and critical thinking about the well-documented negative effects of charter schools on education, society, the economy, and the national interest.

“Choice,” however, is not an argument for the existence or expansion of privately-operated charter schools.

When charter school promoters use the language of “choice,” they want people to:

The 50 problems plaguing privately-operated charter schools will not disappear by endlessly repeating “choice is good” and by treating parents and students as consumers and shoppers instead of humans and citizens with rights that must be guaranteed. Turning major human responsibilities like education into a “free market” commodity is not a modern way of educating people in the 21st century. It will not solve any problems. Over the past 30 years, segregated charter schools have only given rise to more problems, including many problems for themselves.

Parents and students do not need more problematic “choices” or choice just for the sake of choice. They need locally-controlled, world-class, fully-funded, non-demonized, free schools completely uninfluenced by narrow private interests. A modern nation and economy can’t be built on an education system based on the ideology of “survival of the fittest.”

To be sure, the rapid multiplication of privately-operated charter schools under President Joe Biden and U.S. Secretary of Education Miguel Cardona will go a long way toward nation-wrecking, undermining public education, harming the public interest, and dehumanizing the natural and social environment. It is no surprise that intense controversy and upheaval have characterized the charter school sector since day one and seem to increase every month.

Now is the time to step up defense of public schools and the public interest. The public matters more than ever. The privatization of schools and many other public enterprises through neoliberal state restructuring harms the majority, the economy, society, and the national interest. Privatization increases corruption and inefficiency, while lowering quality, increasing costs, and restricting democracy. The public must not permit neoliberals and privatizers to wreck public schools that have been serving 90% of America’s youth for well over a century. Schemes based on the “free market” and a “fend-for-yourself” ethos will certainly benefit a tiny handful of owners of capital, but they won’t solve deep problems that have worsened due to the actions of major owners of capital desperately hanging on to an obsolete economic system.

This article was posted on Monday, March 29th, 2021 at 9:47pm and is filed under Charter Schools, Corruption, Education, Neoliberalism, Public Schools.