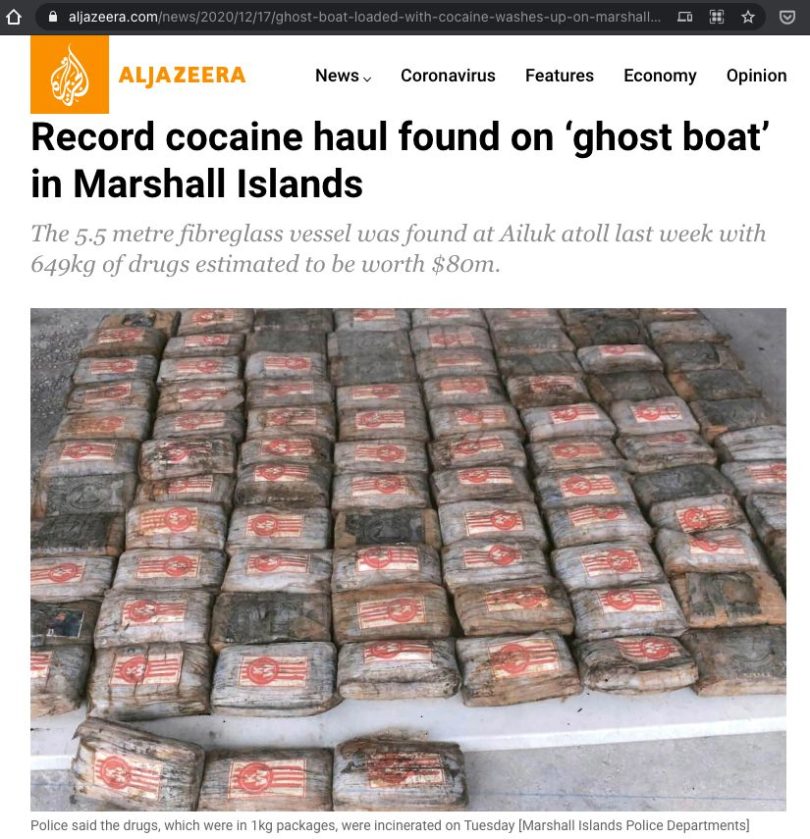 On March 18, the Indian Coast Guard intercepted three Sri Lankan fishing boats near Lakshadweep islands and seized a huge cache of drugs and weapons. A week later several social media users claimed that the boats were trying to smuggle illegal goods into Kerala. The claim has been floating ahead of assembly elections in the state.

Twitter user @pratheesh_Hind posted an image of stacks of drugs and wrote, “Drugs worth 3000cr, machine guns and 1000 bullets were caught when tried to smuggle to Kerala from Lakshadweep. You heard all the numbers right. But it’s not news in Kerala as all mainstream media didn’t show it. They hid the news to stop people from knowing it. Secular Kerala.”

Drugs worth 3000cr, machine guns and 1000 bullets were caught when tried to smuggle to Kerala frm Lakshadweep.
You heard all the numbers right. But its not a news in Kerala as all main stream media didnt shown it. They hided the news to stop people frm knowing it. Secular Kerala. pic.twitter.com/BMmjMDTrNo

A similar claim was made by @meelogsin.

Coastguard apprehended drugs worth 3000cr, machine guns and 1000 bullets being smuggled into Kerala frm Lakshadweep. But no media coverage by the sickulars in Kerala?!?

Several Facebook users made this claim as well. Alt News received multiple requests to verify this on WhatsApp.

The fact-check is split into two sections:

The image shared along with the viral claim was published in a 2020 Al Jazeera report. As per the story, the image shows several 1 kg packages of drugs busted by Marshall Islands police. The Marshall Islands are a chain of volcanic islands and coral atolls in the central Pacific Ocean, between Hawaii and the Philippines.

The total stockpile weighed 649 kg and its worth was estimated to be about $80m. As per Al Jazeera, this was the nation’s largest-ever haul of cocaine. The drugs washed up on Ailuk atoll after drifting on the high seas in an abandoned boat. On March 18, the Indian Coast Guard (ICG) tweeted that three boats were intercepted off Minicoy islands carrying five AK-47 rifles with 1,000 live rounds and 300 kg of heroin. It further said that the boats are being escorted to the nearest port for further joint investigation.

The press note identified the boats as Sri Lankan Fishing Boat Ravihansi. “All the three boats along with 19 crew escorted to Vizhinjam, Kerala for a further joint investigation,” it stated.

This was the second major anti-drug trafficking operation undertaken by ICG on the west coast of India within a fortnight. On March 5, 2021, Sri Lankan boat Akarsha Duwa with six crew was intercepted by ICG off Minicoy island. The Hindu reported that Akarsha Duwa and two other Sri Lankan boats apprehended on March 5 were also brought to Vizhinjam for further investigation. The Coast Guard Station at Vizhinjam is one of the three stations in Kochi.

Several social media users made a baseless claim that the Indian Coast Guard apprehended drugs and weapons on boats en route to Kerala ahead of the state assembly election. The claim was made after ICG apprehended narcotics from Sri Lankan fishing boats on March 18. ICG did not state that the boats were headed to Kerala but that the matter will be investigated in Vizhinjam where a Coast Guard Station located.