American policy toward Iran has long been stupid and self-defeating. Anyone here not see that? Anyone here think that’s a necessary state of affairs? 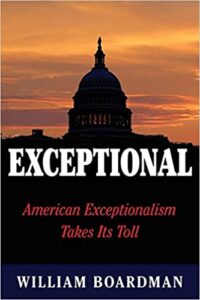 OK, it’s true that stupid, self-defeating policy toward Iran is an American tradition of more than 70 years standing. And yes, it has had some short-term benefits, enriching the Shah’s thugocracy and its American supporters like the Rockefellers and other oil interests. That’s a plus in some books, just not in Iranian books. There it looks more like colonial exploitation laced with crimes against humanity.

Wait a minute: didn’t they take our diplomats hostage in 1979? As well they might. Get over it. Some of you should be particularly grateful for that hostage-taking, since Iran did the US the great “favor” of holding the hostages till their captivity helped elect Ronald Reagan. Ever since then, most Americans have been the hostages of the American right.

Once in power, Reagan showed US gratitude by supporting Saddam Hussein’s war on Iran. Iraq had invaded Iran in September 1980 and the Reagan administration backed Iraq’s eight-year war against Iran. Iraq sometimes used chemical weapons, with US blessing.

Over the last thirty years, US policy has largely consisted of a cold war typified by demonization of anything Iranian and by repeated sky-is-falling cries of Iran getting nuclear weapons as soon as next month. That it never happened has done nothing to quell the cries of wolf. From time to time the US and Israelis assassinate Iranian officials and nuclear scientists, but we don’t call that terrorism. What we call terrorism is any Iranian support for its allies in the region.

The US broke diplomatic relations with Iran in 1979 and has not attempted to restore normal diplomatic dialogue since then. No wonder, then, that American policy toward Iran has long since lost touch with anything resembling intellectual integrity, never mind moral authority. American policy toward Iran is little more than chauvinistic resentment supported by tenacious bigotry against non-white Shia Muslims with a civilization millennia older than ours.

The present moment, the early Biden administration, presents the US with a rare opportunity to re-think our Iran policy and at least attempt to create a relationship with Iran based on mutual respect, honesty, and a recognition of our own historical culpability. This is an opportunity that is not likely to last for long. And it will likely lead nowhere unless the US takes the initiative. So far, that appears unlikely.

At the core of the present moment is the Iran nuclear deal, formally known as the Joint Comprehensive Plan of Action (JCPOA) signed on July 14, 2015, by the US, China, France, Germany, Russia, UK, the European Union, and Iran, after almost two years of negotiation. The joint treaty established limits on Iranian nuclear development, enforced by inspections by the International Atomic Energy Agency (IAEA). In exchange for signing the agreement, Iran was to be relieved of various sanctions imposed by the other parties. (Only three countries in the world opposed the JCPOA at the time – Saudi Arabia, United Arab Republic, and Israel.)

According to the IAEA, Iran remained in compliance with the agreement through May 2019. Two months later, Iran announced that it had breached its limit on low-level enriched Uranium, which the IAEA confirmed: Iran had 205 kg of enriched Uranium, 2.2 kg above the agreement’s level of 202.8 kg. This is not a significant difference, it was self-reported, and it is meaningless in relation to nuclear weapons.

In addition, in late February, Biden used disputed assertions of “Iranian influence” to launch a dubiously-legal attack on a base in Syria said to be the source of attacks in Iraq on US mercenaries there. The US attack came in the midst of intensified Israeli bombing of “Iran-backed” forces in Syria, along with Israel’s announced contingency plans for bombing nuclear facilities in Iran. For more than two years, Israel has carried on an undeclared war on Iranian shipping (according to Haaretz and the Wall Street Journal): “several dozen attacks were carried out, which caused the Iranians cumulative damage of billions of dollars, amid a high rate of success in disrupting its shipping.” Haaretz has also reported two unconfirmed “Iranian missile” attacks on Israeli ships in the Arabian Sea and the Gulf of Oman.

US intelligence on Iran has been politicized and unreliable for decades. Iran is a country of fifty million people on the other side of the world, ringed by US military bases and the US Navy. Iran is under the threat of nuclear attack from US forces every minute of every day. Iran is struggling under crippling economic sanctions imposed and enforced by the US. Despite this longstanding reality, US senators Bob Menendez (D-NJ) and Lindsey Graham (R-SC) recently wrote to President Biden affirming the deep-seated lie that “Iran continues to pose a threat to US and international security.” Whatever sliver of truth may lurk in that assertion, it’s minuscule compared to the threat the US continues to pose to the rest of the world.

Official American paranoia about Iran became hilarious on March 21, as dutifully and uncritically reported by the Associated Press (AP) under the headline:

The breathless lead gave no clue that the “threats” were already two months old, as well as virtually impossible to carry out:

Iran has made threats against Fort McNair, an Army post in the U.S. capital, and against the Army’s vice chief of staff, two senior U.S. intelligence officials said.

The most serious question raised here is why the AP, much less anyone else, should take seriously a story leaked by anonymous sources offering no evidence of any credible military threat by a country thousands of miles away from a US fort on an inland waterway in Washington, DC. How scared are we supposed to be? Intelligence agencies refused to respond to press queries. The local military commander, Gen. Omar Jones, had already managed to reduce the threat to absurdity: “The only specific security threat he offered was about a swimmer who ended up on the installation and was arrested.”

In a rational world, a story like this would go unpublished. Or it would be written in its real context: a local zoning dispute between the city and the Pentagon.

The same day that the AP was indulging in Iranophobia, Iran was reiterating its position with regard to US sanctions and entering new negotiations. As reported by Al Jazeera, Iran said that, first, the US should restore the JCPOA to its pre-Trump status and lift all Trump-imposed sanctions, then Iran would return to full compliance. In an hour-long address marking the Persian new year that coincides with the spring equinox, Supreme Leader Ayatollah Ali Khamenei said in part:

… that previous fool [Trump] … went away in that infamous way, bringing disgrace to his country…. [The US] must know ‘maximum pressure’ has failed so far, and if the current US administration wants to continue, it will also fail.

This was not widely reported in US media. Reuters omitted mention of Iran’s stated position on the JCPOA, but mentioned Biden’s empty gesture of sending the Iranians greetings and hope for the new year.

Biden’s special envoy to Iran provides reason for hope. Robert Malley is generally respected for his nuanced understanding of Middle East politics. He is a veteran diplomat and mediator who served in both the Clinton and Obama administrations. His appointment sparked right-wing accusations that he has too much sympathy for Iran and an “animus towards Israel,” even though he is of Egyptian Jewish descent. Malley has a record of challenging Washington orthodoxy. In a lecture in 2008, Malley acknowledged that US actions abroad have often been “destructive,” and that the US:

Although that analysis has been true since long before 2008, it still raises hackles in that part of US leadership still guided more by ideological fantasy than complex reality.

That reality added a new complexity March 27, when China and Iran announced a new economic agreement for the next quarter-century. Five years in negotiation, the pact provides $400 billion in Chinese investments in Iran in exchange for a steady supply of Iranian oil at a discounted price. At a minimum, this agreement seems to offer Iran some breathing room and stability as well as real relief from economic sanctions.

The Biden administration continues to take positions designed to assure failure to resolve the issue. Maybe that’s the Biden goal, in which case all the posturing is time-wasting theatre. When the US Secretary of State is publicly saying, “The ball is really in their court,” he sounds like he’s mired in mindless denial, not making any gesture to restore broken trust. But if Biden actually wants rapprochement of some balanced nature, he has to decide just how long it’s in US interests to continue to accept the damage of prolonging Trump policies. How is that such a hard choice?

William M. Boardman has over 40 years experience in theatre, radio, TV, print journalism, and non-fiction, including 20 years in the Vermont judiciary. He has received honors from Writers Guild of America, Corporation for Public Broadcasting, Vermont Life magazine, and an Emmy Award nomination from the Academy of Television Arts and Sciences. A collection of his essays, EXCEPTIONAL: American Exceptionalism Takes Its Toll (2019) is available from Yorkland Publishing of Toronto or Amazon. This article was first published in Reader Supported News. Read other articles by William.

This article was posted on Sunday, April 4th, 2021 at 7:44am and is filed under Anti-war, Iran, Joe Biden, Media, Terrorism (state and retail).