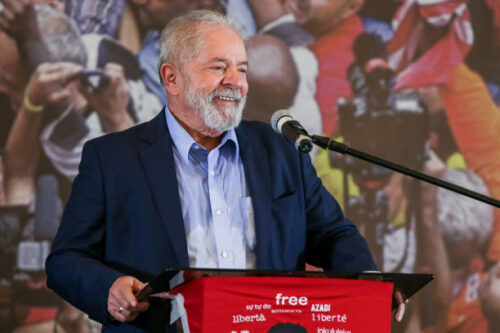 SAO BERNARDO DO CAMPO, BRAZIL – MARCH 10: Luiz Inacio Lula da Silva, Brazil’s former president, speaks during a press conference after convictions against him were annulled at the Sindicato dos Metalurgicos do ABC on March 10, 2021 in Sao Bernardo do Campo, Brazil. (Photo by Alexandre Schneider/Getty Images)

On January 24, 2018, in Porto Alegre, Lula was tried at the Federal Court of Appeals for the Fourth Region (TRF-4), which confirmed the decision of Judge Sergio Moro and sentenced him to twelve years and one month in prison. According to the Clean Record Act, he would now be ineligible for the 2018 elections. The weaknesses of the case against Lula were widely denounced: lack of evidence, lack of right of defense, illegal confinement of witnesses, accusation of crimes that did not exist in the criminal code, abuse of process and bias against the defendant.

There were popular demonstrations in Lula’s support and disapproval of the decision. Unfazed, Lula gave an electrifying speech on April 7, 2018, calling on his allies and admirers to turn into millions of Lulas. “All of you, from now on, will turn into Lula and will walk around this country doing what you have to do. They have to know that the death of a combatant will not stop the revolution.” On the same day, Lula turned himself in by ten p.m. at the Federal Police headquarters in Curitiba. On August 17, 2018, the United Nations Human Rights Committee requested that Brazil’s government not prevent Lula “from standing for election in 2018 presidential elections, until his appeals before the courts have been completed in fair judicial proceedings.” None of this had an impact on the Brazilian ruling elite which was hell-bent on putting Lula in jail.

Today, Lula walks as a free man after the Supreme Federal Tribunal (STF) – Brazil’s highest court – struck down all the criminal convictions against him on March 8, 2021. Opinion polls suggest that Lula is the best-placed politician to challenge the ultra-right President Jair Bolsonaro in 2022 elections. At the same time, Bolsonaro is fast losing his appeal among the electorate; as per a Datafolha survey published on 16 March, 2021, his disapproval rating hit a new high at 54%. What explains the enduring popularity of Lula? Unlike any other politician coming from a rich background, Lula was born into a family of illiterate farmers as their seventh son. They all lived in a house with only two rooms, an earthen floor and no running war. They were not even poor; they were less than poor, condemned to live a life of pure precarity.

Lula began to work at the age of seven in August 1953. After working informally as a street vendor, shoeshine boy, office boy and as an auxiliary of a laundry assistant, he got his first registered job at Columbia General Warehouses. In 1966, he got a job at Industrias Villares, in Sao Bernardo do Campo where he joined the Metalworkers Union.  Lula emerged on the national scene from the late 1970s as a confrontational union leader, heading a revival of labor struggles. The Workers Party (PT) was founded in February 1980 as part of this organized labor movement. After three failed attempts, Lula won presidency in October 2002. Lula was Brazil’s first working-class president; the first president without a university degree; the first enrolled in a leftist party (PT); the only president to democratically complete two terms in office; and the only elected president followed by a successor who was also elected by direct popular vote.

Under Lula, a concerted campaign was initiated to provide basic amenities to the people. While not radical, it allowed the impoverished masses to live a dignified life. In Lula’s words, “I have made upward social mobility possible for the most underprivileged people in Brazil. I helped lift 36 million people out of extreme poverty, I have settled farmer families on 47 million hectares (almost 50% of what was done in five hundred years of Brazilian history), I helped another 40 million Brazilians escape poverty and join a new lower middle class, I have brought electricity access to more than 15 million people”. Apart from this, he started the Fome Zero (Zero Hunger) program for combating hunger; the program was created in 2001 at Instituto Cidadania, linked to the PT and renamed the Instituto Lula in 2011. The program became a public policy in 2003. Lula moved a considerable amount of public finances towards education. The University for Everyone Program (PROUNI) was created during Lula’s first term, in 2005. The Student Financing Fund for Higher Education (FIES) – created in 1999 – was reformulated and expanded in 2010, during Lula’s second term in office. The social minorities gained from his policies. Hunger, a grave problem in Brazil, vanished and new federal universities — accessible to the working class — opened.

A survey released on December 16, 2010 showed Lula’s approval rating at 87%, an unprecedented level. A Sensus Institute survey showed the same, qualifying Lula as the president with the highest ratings on the planet – Nelson Mandela left the South African government in 1999 with an approval rate of 82%. Datafolha’s survey showed an approval rating of 83% and concluded that Lula ended his second term with more support than when he started his first term (76%). From this, it is evident that Lula is deeply etched in the political consciousness of the Brazilian citizenry. With the dropping of all charges against him, it is possible that the Brazilian Left will see a resurgence in its national strength.